A row of commercial buildings on the west side of High Street, between Dwight and Suffolk Streets in Holyoke, around 1891. Image from Holyoke Illustrated (1892). 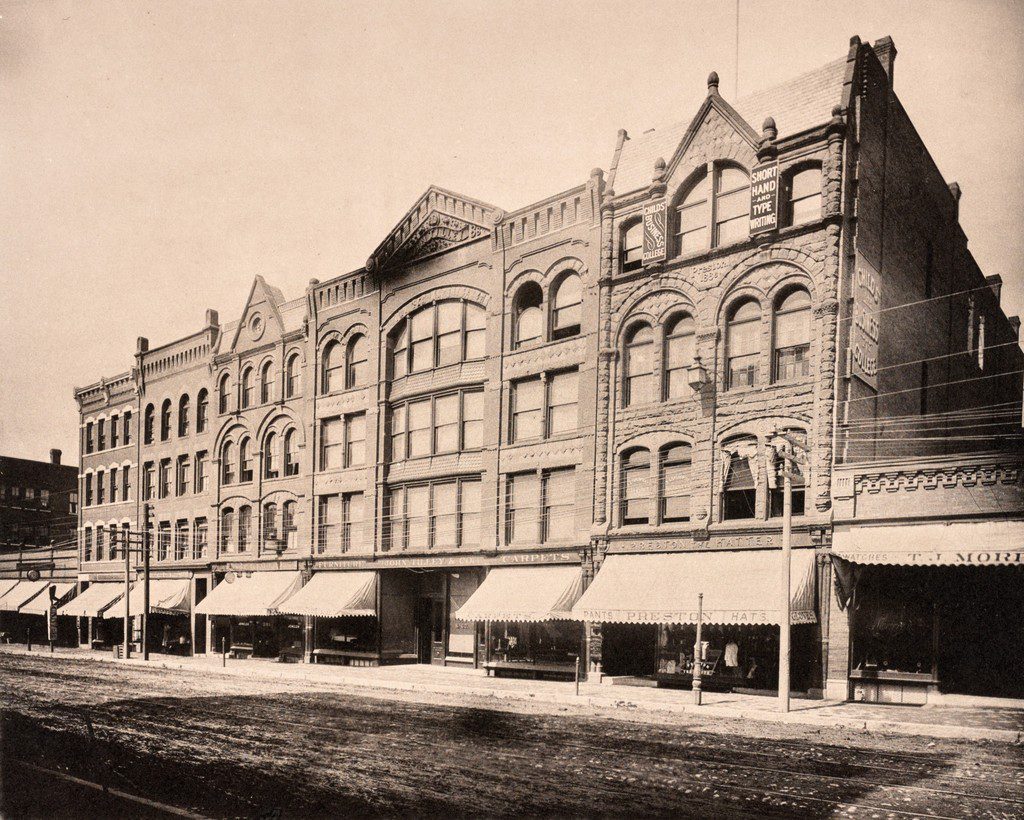 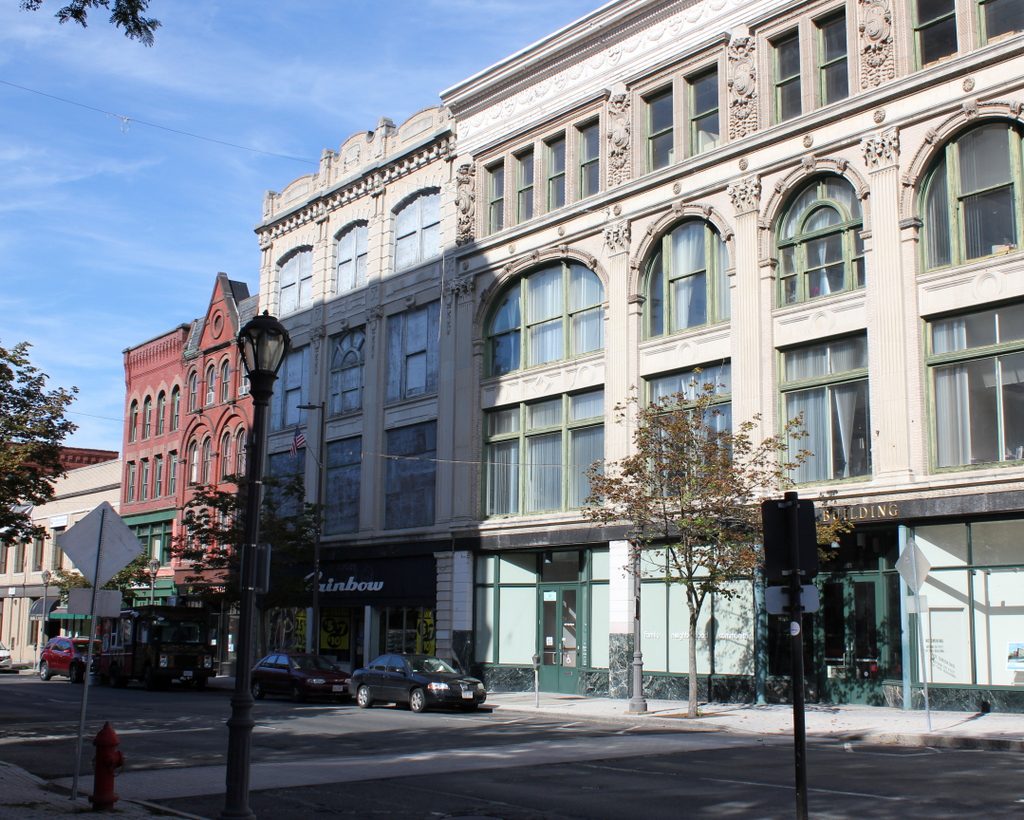 The first photo shows High Street as it appeared around 1891, when Holyoke was at the peak of its prosperity as an industrial city. These commercial blocks had all been built only a few years earlier in the 1880s, and housed a variety of businesses and professional offices. The three most visible buildings in the center of the photo all featured ornate Romanesque Revival-style architecture, and formed a nearly symmetrical group, with many similarities between the buildings on the right and the left.

On the right side, closest to the camera in the first photo, was the the Preston Block, which was built in 1886. It was owned by Joseph S. Preston, a hatter who had a shop on the ground floor, and the upper floor tenants included the Childs Business College. According to its advertisement in the 1891 city directory, this school “Provides a thorough Business Education for Young Men and Women. Business men promptly supplied with Bookkeepers, Stenographers and Business Assistants. Sessions Day and Evening, from September to July.”

To the left of the Preston Block, in the center of the photo, was the Tilley Block. It was built in 1888 and was owned by John Tilley, who ran a furniture, carpet, and bedding store on the ground floor. Further to the left, on the other side of the Tilley Block, was the Taber Block, which was built around 1884. Its design was similar to the Preston Block, although somewhat shorter and with a brick facade instead of rusticated stone. When the first photo was taken, the storefront on the ground floor was occupied by Frank L. Taber, a jeweler and watchmaker.

Today, very little is left from the 1891 scene, although nearly all of these changes came within just a couple decades after the photo was taken. The first change came only a few years later, in 1899, when the one-story building on the far right was demolished and replaced by the Steiger’s department store. This Beaux Arts-style building was designed by prominent local architect George P. B. Alderman, and featured a light-colored exterior that contrasted with the darker brick of the older buildings in the scene. Two years later, in 1901, Albert Steiger purchased the adjoining Preston Block and expanded the store. It does not seem clear whether the Preston Block was demolished or simply incorporated into the Steiger’s building, but either way the stone facade of the Preston Block was replaced by one that matched the rest of the department store.

The trend toward Beaux Arts architecture continued around 1912, shortly after the Tilley Block was purchased by Thomas S. Childs. The building itself evidently survived, but the facade was rebuilt to match early 20th century architectural tastes, with a design that was also the work of Alderman. Childs was a shoe and hosiery dealer, and his store occupied the ground floor of the building, where Tilley’s furniture business had once been located. Like Steiger’s, the Childs shoe store would remain a fixture here in downtown Holyoke for many years, but it was gone by the early 1980s. Today, the ground floor still has a commercial tenant, but the three upper floors of the building are boarded up.

Of the three buildings in the center of the first photo, only the Taber Block survives relatively unchanged. Its neighbor to the left, the c.1890 Bishop Block, is also still standing from the first photo, although the exterior of the second floor has been rebuilt with new windows. Overall, though, this section of High Street has a remarkable number of historic commercial buildings from the late 19th and early 20th centuries, and these buildings are now part of the North High Street Historic District on the National Register of Historic Places.