The Johnson’s Bookstore building at 1373-1383 Main Street in Springfield, around 1938-1939. Image courtesy of the Springfield Preservation Trust. 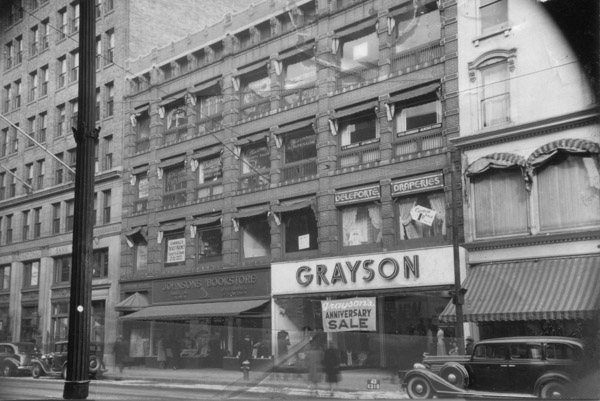 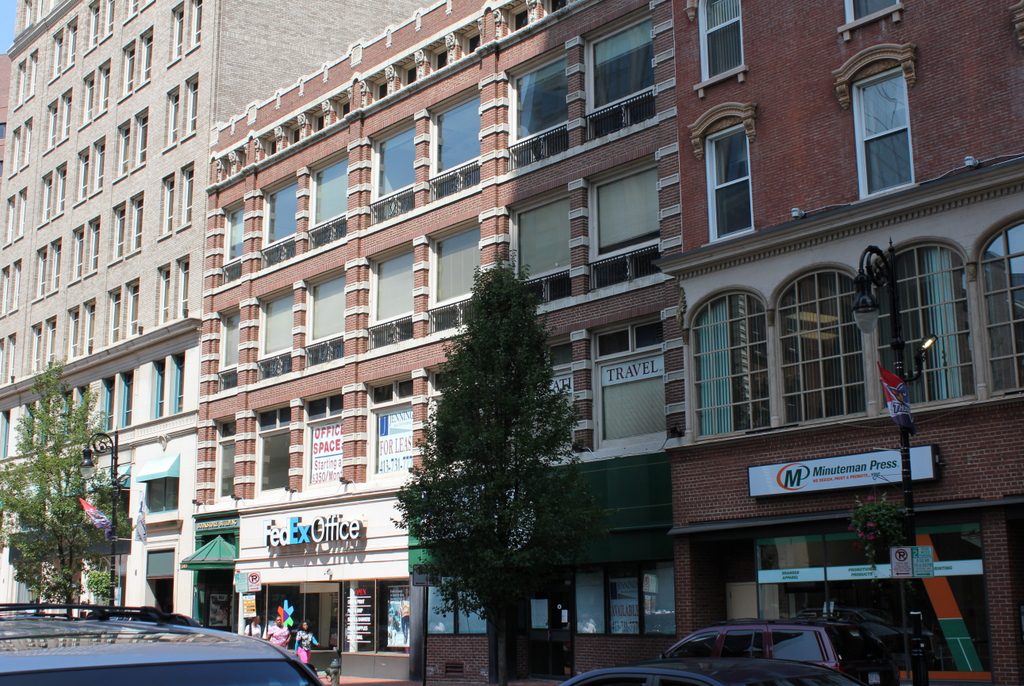 This building was constructed in 1861, and was originally part of the Union Block, a group of three matching Italianate-style commercial buildings that extended to the corner of Harrison Avenue. The left-most part of the block was demolished around 1915 to build the ten-story Third National Bank building that now stands there, and the central part was heavily remodeled around 1909. However, the section on the far right still retains its original exterior on the two upper floors, and gives a sense of what the entire row of buildings once looked like.

The early 20th century remodeling of the central building occurred after it was purchased by Henry R. Johnson, the owner of Johnson’s Bookstore. This longtime fixture in downtown Springfield had been founded in 1893 by Henry and his brother, Clifton Johnson. Henry was the one who was primarily involved in running the bookstore, but Clifton served as a silent partner, providing financing for the business. The latter was also a noted author and photographer, and his works included the books in the Picturesque series of the 1890s, which he co-authored while also doing much of the photography. These books, each of which highlighted a different western Massachusetts county, featured hundreds of photographs of local scenes, and have provided many of the historic images that are used on this blog.

Johnson’s Bookstore was located in several other downtown buildings before Henry purchased this one around 1909. He soon set about renovating the exterior, replacing the old Italianate-style facade with one that matched the Classical Revival tastes of the early 20th century. The new facade was designed by the local architectural firm of Kirkham and Partlett, and included much larger windows, along with a polychromatic exterior made of contrasting red bricks and light-colored stones. Overall, the building was left essentially unrecognizable from its original appearance, as seen in the difference between it and its once-identical neighbor to the right.

Henry Johnson retired from active business in 1922, and Clifton’s sons, Arthur and Roger, took over the operation of the bookstore. The business steadily grew, and the store eventually occupied three floors of this building, plus the building to the rear of it, and it also owned a four-story warehouse on the other side of Market Street. By the early 1950s, the store employed 100 people, and brought in $1.3 million in sales per year. Aside from new and used books, the store sold a variety of stationery, office supplies, toys, and gifts, and was a popular destination for downtown shoppers throughout the 20th century.

The bookstore would remain in the Johnson family for several more generations, with Clifton Johnson’s great-grandson, Paul C. Johnson, eventually becoming president in the early 1990s. However, by this point shopping trends had shifted toward suburban malls and away from traditional downtown businesses. Many iconic stores, from Forbes & Wallace to Steiger’s, closed in the late 20th century, and Johnson’s Bookstore followed in January 1998, after more than 100 years in business. The building itself is still standing, though, and aside from the loss of the bookstore this scene has not undergone any significant changes in nearly 80 years since the first photo was taken.