The Hotel Kimball, seen from the Apremont Triangle at the corner of Pearl and Bridge Streets in Springfield, around 1938-1939. Image courtesy of the Springfield Preservation Trust. 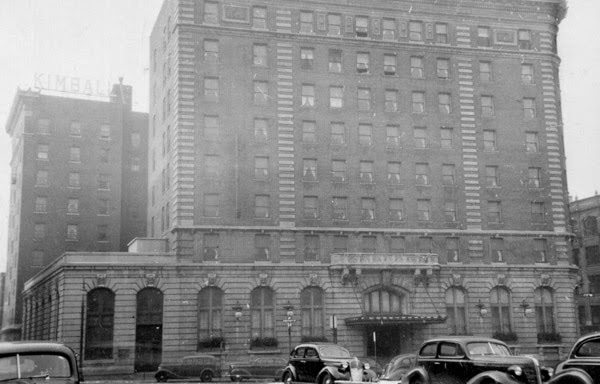 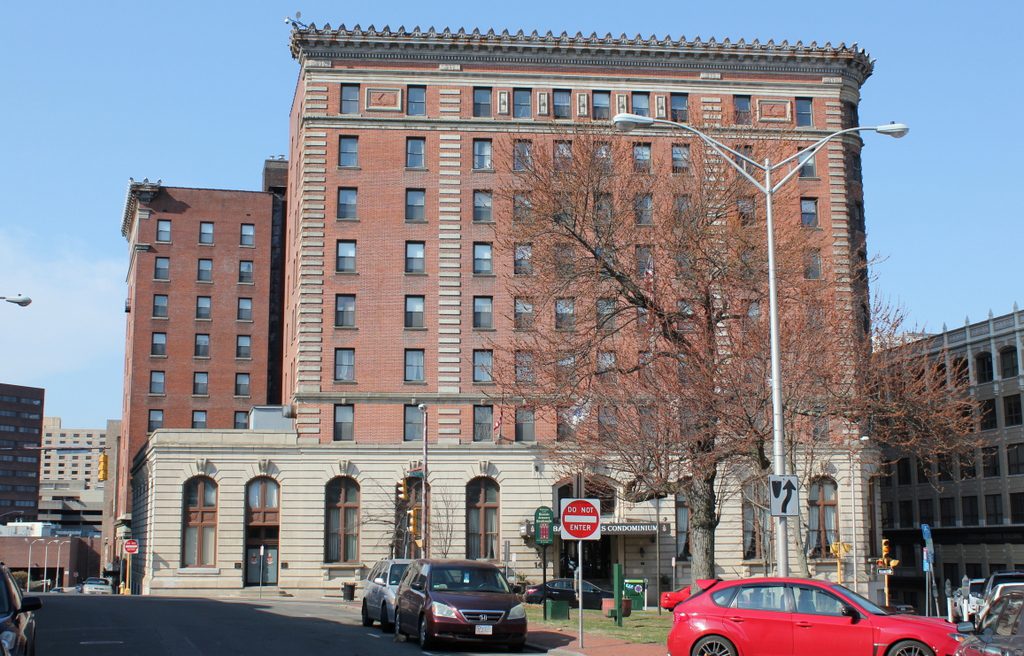 The Hotel Kimball is one of the most historically-significant early 20th century buildings in Springfield. It was opened in 1911, at a time when the city was at its peak of prosperity as a major commercial and manufacturing center, and it was regarded as the finest hotel in the city. It was constructed at a cost of $1 million – about $27 million today – and featured a Renaissance Revival exterior that was the work of architect Albert Winslow Cobb. On the interior, it originally included 309 guest rooms, a dining room that could seat 450 people, and the largest ballroom in the area.

An advertisement in the 1912 city directory declared the Hotel Kimball to be “A Modern Metropolitan Hotel Unexcelled in New England. Affording 500 Guests Every Comfort, Convenience and Safety.” The ad also provided the room rates, which started at $1.50 ($40 today) for “Rooms with use of Bath.” This presumably meant a communal bathroom, because “Rooms with Shower Bath” started at $2 ($53 today), while “Rooms with Bath” would cost a traveler $2.50 and up ($66 today). However, the most expensive option was “Suites of Parlor, Chamber and Bath,” which started at $5.50, or $144 today.

Aside from its importance as the city’s finest early 20th century hotel, the Hotel Kimball was also significant as the home of one of the country’s first commercial radio stations. Radio broadcasting was still in its infancy in 1921, when WBZ was licensed to Westinghouse. It transmitted from the Westinghouse facility on Page Boulevard, but in 1922 the station opened its studios here in the Hotel Kimball. The station remained here until 1931, when it relocated to Boston, but this building continued to be used by its affiliate station, WBZA, which served the Springfield market during the mid-20th century.

In the meantime, the Hotel Kimball was significantly expanded in 1923, with a large addition that is visible in the distance on the left side of both photos. It would remain an important hotel for many years, and attracted a number of prominent guests during this time, including presidents Calvin Coolidge, Franklin D. Roosevelt, Dwight D. Eisenhower, John F. Kennedy. Other celebrity visitors included Babe Ruth, who stayed here in the 1920s and 1930s along with the rest of his Yankees teammates, prior to their exhibition games against the minor league Springfield Ponies.

In addition to its popularity with visitors to Springfield, the Hotel Kimball also housed a number of long-term residents. The 1930 census, for example, lists 52 residents of the hotel. These included at least eight hotel maids and housekeepers, plus the hotel manager and his family. There were also a few other middle class residents, such as an accountant, an engineer, and several salesmen, but most were members of Springfield’s upper class, with professions that included a physician, several attorneys, a banker, and a number of business executives. The monthly rents ranged from about $50 to $475 (about $760 to $7,200 today), but one resident was also listed as having a rent of $10,000 – an implausibly-high number that must have been an error.

Of these residents who lived here in 1930, the most prominent was Frederick H. Gillett, a politician who was then serving in the U.S. Senate. Born in Westfield in 1851, Gillett began practicing law in Springfield in 1877, and in 1892 he was elected to the U.S. House of Representatives. He served in the House for 32 years, from 1893 to 1925, and he was also the Speaker of the House from 1919 until 1925, when he was elected to the Senate. He went on to serve one term in the Senate, from 1925 to 1931, and then retired from politics. Throughout much of his political career, Gillett lived here at the Hotel Kimball. He was here as early as 1912, just a year after it opened, and he would remain here until at least the early 1930s, although he may have lived here until his death in 1935.

During the 1940 census, which was done only a year or two after the first photo was taken, there were a total of 38 residents living here. There appears to have been more middle class workers than in 1930, with occupations such as an accountant, a mechanic, a clerk, a nurse, an electrician, and a few salesmen, in addition to five hotel employees who lived here. However, there were still a number of wealthy residents living at the hotel, including three attorneys and a few business owners.

The 1940 census enumerator not include their monthly rent, but their salaries are listed, which provides valuable insight. Most of the hotel maids earned $703 per year ($12,700 today), and the middle class workers such as the electrician, mechanic, and nurse all made a little over $1,000 ($18,000 today). The wealthier residents earned between $3,000 and $5,000 ($54,000-$90,000 today), and any incomes over $5,000 were recorded as “$5,000+” on the census. This was the case for two Kimball Hotel residents, who each earned the modern equivalent of over $90,000: John Haggerty, whose occupation was listed as “electrotypes” for a publishing company, and Chester McGown, the president of American International College.

Around the early 1950s, the hotel was acquired by Sheraton, which had been founded in 1937 in Springfield. This property became the Sheraton-Kimball Hotel, and it was declared to be “The Leading Hotel in Western Mass.” in a 1955 directory. The advertisement went on to list its “Town Room – Coffee Shop (Excellent food, Superb Service) Pickwick Cocktail Lounge (Entertainment Nightly),” and it also mentioned how the hotel specialized in wedding receptions and private parties.

However, despite this glowing description of the hotel, the mid-20th century was a difficult time for grand downtown hotels across the country, as interstate highways and suburban motels began changing the way Americans traveled. The Sheraton-Kimball closed by the early 1960s, but the building avoided demolition. Instead, it was converted into apartments, and it was renamed the Kimball Towers. Then, in 1985 it was converted into condominiums, with a total of 132 units. Today, it is still in use as a condominium building, with few exterior changes since the first photo was taken some 80 years ago. It remains an important downtown landmark, and it forms the centerpiece of the Apremont Triangle Historic District, which was added to the National Register of Historic Places in 1983.