The house at 100 School Street in Springfield, around 1938-1939. Image courtesy of the Springfield Preservation Trust. 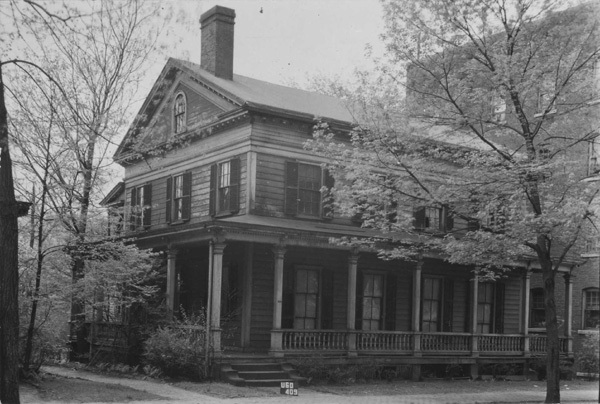 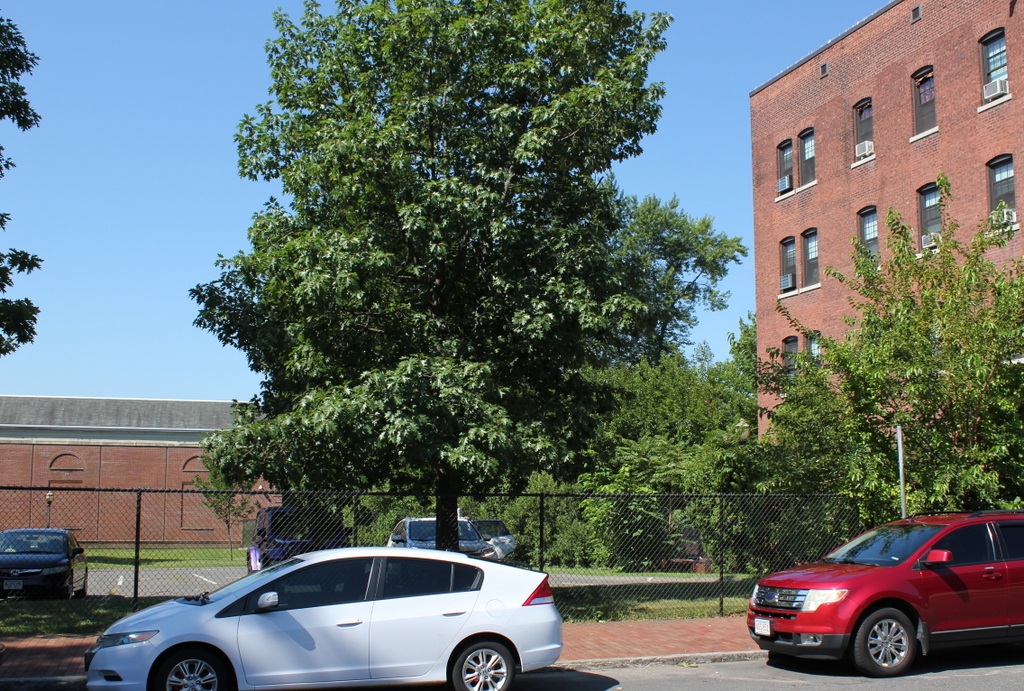 This house was built in 1819, and it originally stood a block to the west of here, at 95 Maple Street. At the time, the lower part of Maple Street was becoming a fashionable residential area, and many wealthy families in Springfield built homes here during the first half of the 19th century. Many of these homes, including this one, were the work of Simon Sanborn, a master builder who was responsible for a number of important buildings in Springfield during this period, such as the Alexander House, Byers Block, and the old Unitarian Church.

The original owner of this house was John Howard, the son of the retired First Church pastor Bezaleel Howard. John was a lawyer, having graduated from Yale in 1810, and in 1818 he married Mary Stoddard Dwight, from the prominent Dwight family. Her father, Colonel Thomas Dwight, was a lawyer and politician, serving in both houses of the state legislature, the governor’s council, and even one term in the U. S. House of Representatives. John and Mary Howard moved into this house soon after their marriage, and they raised their four daughters here: Hannah, Margaret, Frances, and Eliza.

John Howard enjoyed a successful career as both a politician and a banker. He served as a fire warden in 1829, a town selectman from 1830 to 1831, and a member of the governor’s council from 1837 to 1838. In addition, he was the cashier of the Springfield Bank from 1823 to 1836, where he earned a salary of $1,000 per year, and in 1827 he became the first treasurer of the Springfield Institution for Savings. Howard subsequently became the president of Springfield Bank in 1836, and he served in that capacity until his death in 1849.

During this time, Howard continued to live in this house, although his wife Mary died in 1836, when she was just 44 years old. The house, which was still located on Maple Street at the time, stayed in his family for at least a few years after his own death. The 1851 city map shows that the property lines extended the width of the block, all the way from Maple to School Streets, and Howard also owned land on the other side of Maple Street, which stretched down the hill to what is now Dale Street.

In 1857, the property was sold to James D. Brewer, a hardware dealer whose store was located at the corner of Main and State Streets. Along with this business, Brewer was also involved in a number of other local companies, serving as a director and later the president of Chicopee Bank, treasurer of the Indian Orchard Canal Company, and a director of the Agawam Canal Company, the Springfield Car and Engine Company, and the Hampden Watch Company. However, he was perhaps best known for his involvement in the Springfield Gas Light Company, serving as its treasurer for 26 years.

James and his wife Sarah had six children, although only two survived to adulthood. Their only surviving son, Edward, later moved to Hartford, and their daughter, Harriet, married Dr. Luke Corcoran and remained here in Springfield. By the mid-1880s, the Corcorans were living here with James and Sarah, who were both in their 60s at this point. James died in 1886, and his widow died just nine weeks later, leaving the family home on Maple Street to Harriet.

The Corcorans soon began major changes here, and in 1889 they began construction on a new house on Maple Street. The old house was moved to the back of the lot, becoming 100 School Street, as shown here in the first photo. They lived in the new house for the rest of their lives, until their deaths in the 1920s, However, they maintained ownership of the old one, and used it as a rental property. During the 1900 census, it was the home of Charles E. Galacar, the vice president of the Springfield Fire and Marine Insurance Company. At the time, he was living here with his wife Minerva, two of their daughters, and two servants, and he would remain here until his death in 1916.

The house was subsequently rented by Harold G. Meadows, the president of the New England Steel Casting Company. He was living here during the 1920 census, along with his wife Frances, their six children, and two servants. They lived here until 1934, when Harold died, and by the following year the house was vacant. The house was still listed as vacant in city directories by the end of the decade, when the first photo was taken, and it does not appear to have had any further tenants. Along with the neighboring early 19th century house at 102 School Street, which had also been empty for many years, it was ultimately demolished in 1946. The site is now a parking lot for the Milton Bradley School, which stands in the distance of the 2018 photo.