The view looking west on Main Street, from the corner of Lexington Road in Concord, around 1910-1920. Image courtesy of the Library of Congress, Detroit Publishing Company Collection. 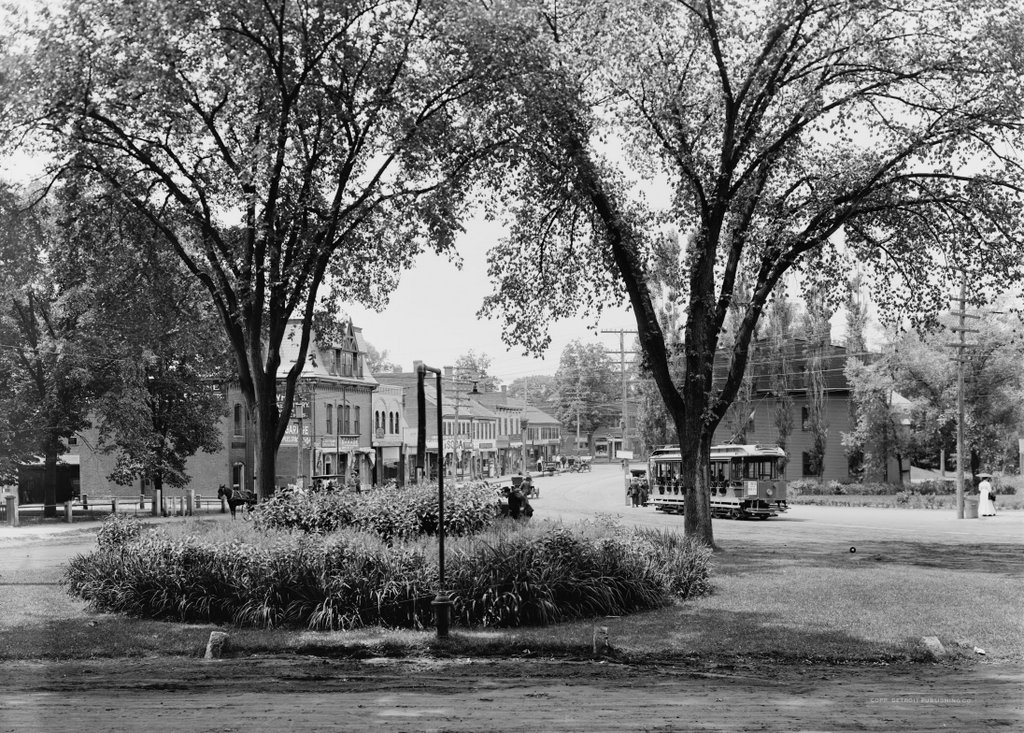 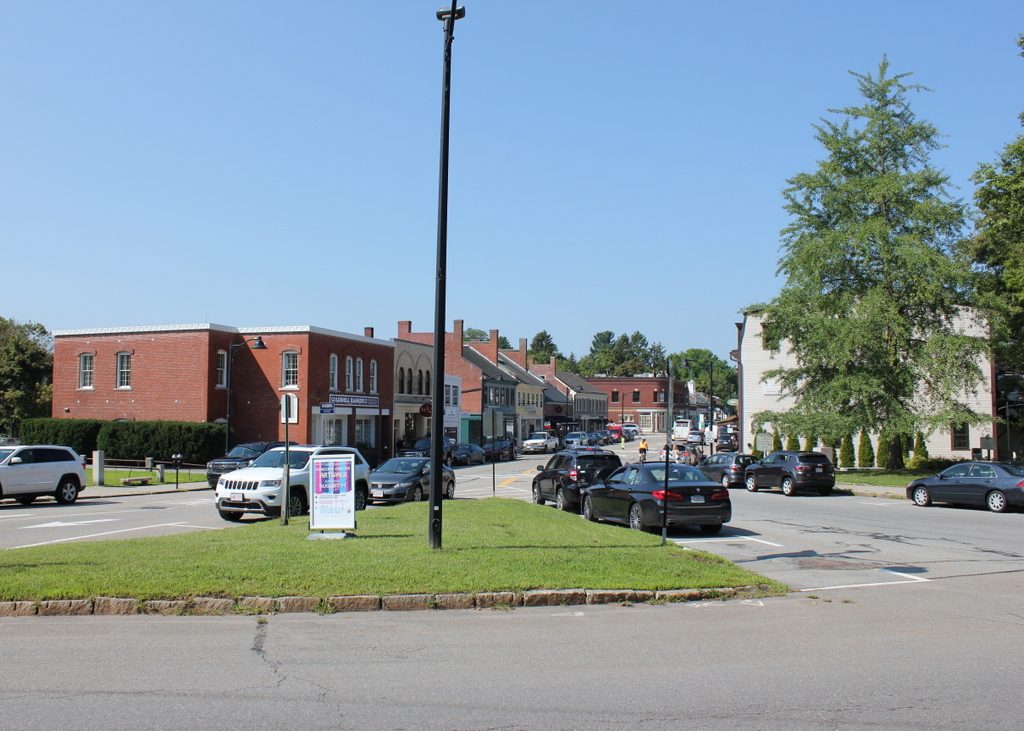 These two photos were taken more than a century apart, from the small rotary at the intersection of Monument Road, Lexington Road, and Main Street in downtown Concord. The view is facing west down Main Street, showing a variety of low-rise commercial buildings, most of which date back to the 19th century. Aside from some obvious modern changes, such as an increase in automobiles on the road and a lack of trolleys in the present-day photo, remarkably little has changed in this scene, and most of the historic buildings here on Main Street remain well-preserved.

This block of Main Street was originally known as the Milldam. Starting in the 17th century, the site of the street was a dam across the Mill Brook, and over the years it steadily grew to include a variety of offices and stores on top of the dam itself. Then, in 1828 the Milldam Company was formed, and it purchased the land on either side of the dam. The pond was subsequently drained, the old buildings on the dam were demolished, and new lots were laid out. The result was new commercial buildings on either side of Main Street, and many of these are still standing today.

Starting on the far left side, the closest building to the foreground of the two photos is Garty’s Block, which came several decades after the milldam was reconstructed. It dates back to around 1870, and it originally had a Second Empire-style mansard roof, as shown in the first photo. This has since been removed, and the ground floor storefront has also been altered at some point in the 20th century, leaving only the second floor relatively unaltered from the exterior. Just to the right of it, at 15-17 Main Street, is a two-story building that once housed Alexander Urquhart’s bakery. It was constructed in 1898, replacing an earlier wooden structure on the same site, and it still stands today, with fewer dramatic changes than its neighbor to the left.

Further in the distance is a pair of two-story buildings with gabled roofs and high chimneys on their end walls. These features distinguish them from later 19th century commercial blocks, which tended to have flat roofs and less prominent chimneys. Both buildings were part of the Milldam Company’s redevelopment of the area, and they were constructed sometime around 1835. Like most of the other buildings here, the ground floors have been altered, but otherwise they have retained much of their original appearance.

Just beyond these two buildings, in the first photo, is a small two-story Italianate-style building that probably dated back to around the 1850s or 1860s. This is one of the few buildings from the first photo that is no longer standing; it was demolished by the early 1930s, when the present-day building—originally a First National Store—was constructed on the site. On the other side of it is the Davis-Richardson Block at 37 Main Street, which features a design similar to the nearby 1835 buildings. This block is slightly newer, though, having been built around 1845.

Some of the other 19th century buildings in this scene include the Friend’s Block, the two-story brick building that stands in the distance in the right-center of the photos, at the corner of Main and Walden Streets. It was built in 1892, making it one of the newer structures here on this section of Main Street. On the other side of the street, on the far right of both photos, is the Union Block at 18-26 Main Street. Like Garty’s Block across the street, it was built with a mansard roof, but in this case the roof has been retained, and the exterior of the building has not changed significantly over the years.

Although very little has changed here since the first photo was taken, this block of Main Street faced the possibility of demolition during the early 20th century. In the late 1920s, cement manufacturer Albert Y. Gowen purchased many of these properties, with the intention of demolishing all of them and replacing them with new colonial-style buildings. Gowen had been inspired by the newly-reconstructed Colonial Williamsburg in Virginia, and he hoped to create something similar here, with a Main Street lined with faux-colonial shops. However, this plan faced significant opposition, including from some of the property owners who refused to sell, and Gowen ultimately abandoned his plans. As a result, Concord continues to have a town center filled with authentic 19th century buildings, as opposed to entirely fabricated 18th century ones.