The view looking south on Fifth Avenue from the corner of West 59th Street, at the southeast corner of Central Park in New York, around 1904. Image courtesy of the Library of Congress, Detroit Publishing Company Collection. 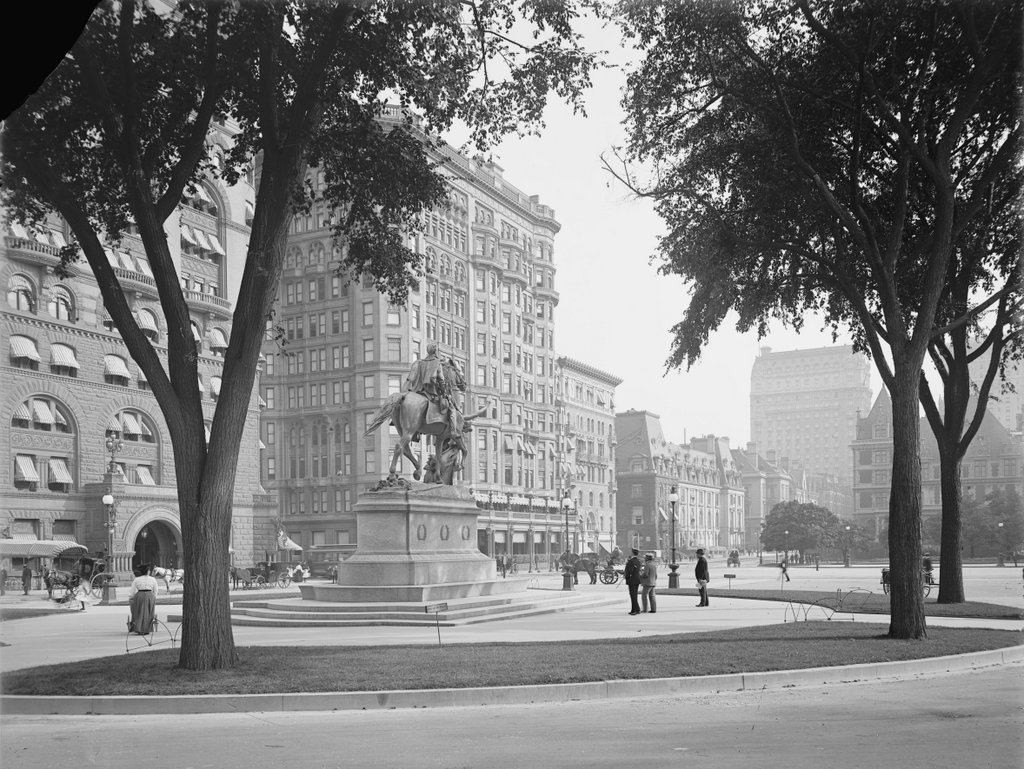 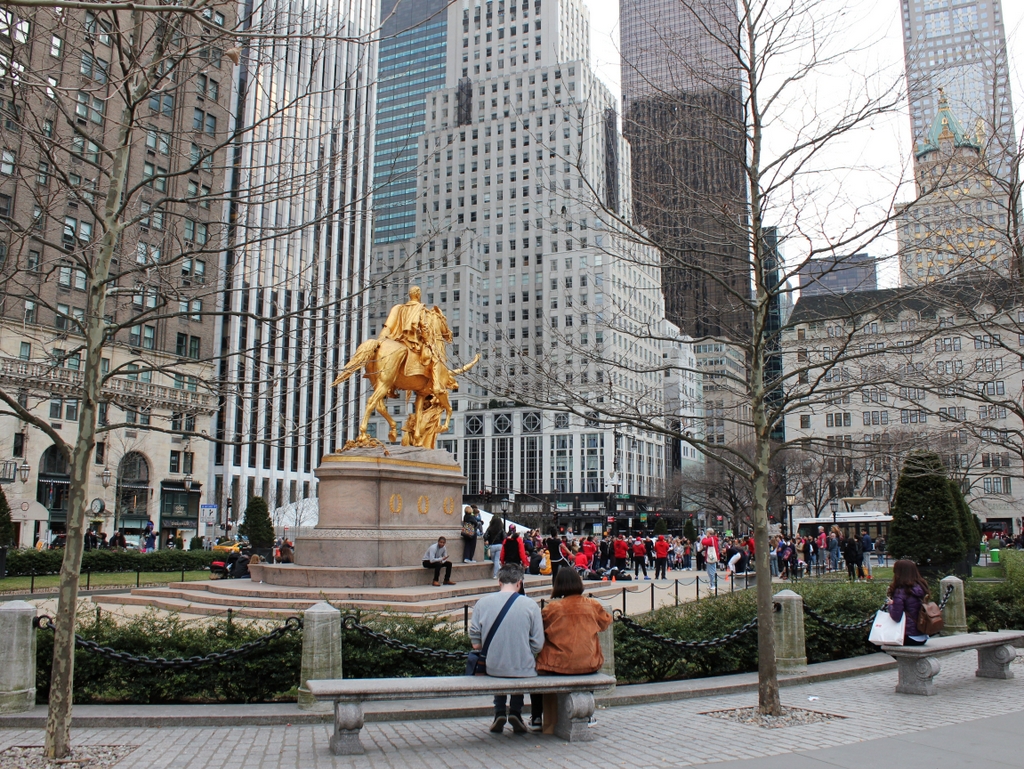 These photos show the view looking down Fifth Avenue from what is now Grand Army Plaza, at the southeast corner of Central Park. The first one was taken around 1904, at a time when this section of Fifth Avenue was undergoing a transition from an affluent residential neighborhood to a busy commercial center. As a result, the photo shows a mix of both private homes and turn-of-the-century skyscrapers along this part of the street.

The most dominant feature in the foreground of this scene is the statue William Tecumseh Sherman, which was installed in 1903. It was designed by prominent sculptor Augustus Saint-Gaudens, and it commemorates the famous Civil War general who spent his later years in New York City. Beyond the monument, on the far left side of the photo, is the Hotel Netherland, which was built in 1893 at the northeast corner of Fifth Avenue and East 59th Street. To the right of it is the Hotel Savoy, which was built in 1892, and further to the right, in the center of the scene, is the much smaller Bolkenhayn apartment building. This was also built around the same time, and one of its early guests was a young Winston Churchill, who stayed here in the apartment of Congressman William Bourke Cockran during a visit to New York in 1895.

To the right of the Bolkenhayn, on the block between East 57th and East 58th Streets, is Marble Row. This block of eight marble townhouses was built in 1869, and over the years it was home to a number of wealthy residents. Mary Mason Jones, daughter of the noted early 19th century businessman John Mason, originally owned all eight homes, and she lived in the southernmost one, at the corner of East 57th Street on the right side of the building. This house was later the home of businessman Hermann Oelrichs and his wife Theresa, who also owned the famous Rosecliff mansion in Newport. Other wealthy residents of the townhouses included merchant William E. Iselin and businessman Solomon R. Guggenheim, the founder of the Guggenheim Museum in New York. Many of these homes were still private residences when the first photo was taken, but at least one—the one on the left side of the building at the corner of East 58th Street—had been converted to commercial use, having been occupied by the Plaza Bank since the early 1890s.

Beyond Marble Row are more upscale 19th century homes. On the other side of East 57th Street is the home of Collis P. Huntington, a railroad executive who was involved in the construction of the First Transcontinental Railroad as part of the Central Pacific Railroad. He built this granite house in the early 1890s, and he died in 1900, although his widow Arabella was still living here when the first photo was taken. There are more homes further in the distance past this house, but they are dwarfed by the 20-story St. Regis Hotel, which was completed in 1904 at the corner of Fifth Avenue and East 55th Street.

On the far right side of the first photo is the home of Cornelius Vanderbilt II. The original portion of this house was built in 1883, at the corner of West 57th Street, but a decade later it was expanded along the entire length of the block to West 58th Street, making it the largest private home ever built in New York City. Vanderbilt was the grandson of family patriarch Cornelius Vanderbilt, and he was also the largest beneficiary of the family fortune upon the death of his father in 1885, receiving nearly $70 million. He spent a good portion of his wealth on lavish homes, including this one in New York and The Breakers in Newport. He died in 1899, but his widow Alice continued to live in these houses for several more decades.

Today, more than a century later, there is almost nothing left here from the first photo, aside from the Sherman statue in the foreground. The Hotel Netherland was demolished in 1926, and a year later it was replaced by the Sherry-Netherland, which still stands on the site. Also during the mid-1920s, the neighboring Hotel Savoy and the Bolkenhayn were demolished, after having been acquired by the owner of the nearby Plaza Hotel. The site was rebuilt with a new hotel, the Savoy-Plaza Hotel, which opened in 1927. This building was, in turn, demolished in 1965 to build the 50-story General Motors Building, visible just to the left of the statue in the present-day photo.

Further in the distance, the townhouses of Marble Row were demolished piecemeal during the early 20th century. The last surviving remnant, the corner house on the right side, stood here until around 1930, and today the majority of this block is occupied by the Art Deco-style Squibb Building, built in 1930 at 745 Fifth Avenue. Both the Huntington and Vanderbilt mansions were similarly demolished in the late 1920s, and their lost are now home to the flagship stores of Tiffany & Co. and Bergdorf Goodman, respectively. Further down Fifth Avenue, the other 19th century mansions from the first photo are also long gone, and much of this land is now the site of the 58-story Trump Tower, visible in the center-right of the present-day photo. Overall, the only surviving building from the first photo is the St. Regis. However, while it was very prominent in that photo, it is now hidden from view in this scene by the modern skyscrapers that surround it.