The house at the northwest corner of Fifth Avenue and West 58th Street in New York City, around 1905-1910. Image courtesy of the Library of Congress, George Grantham Bain Collection. 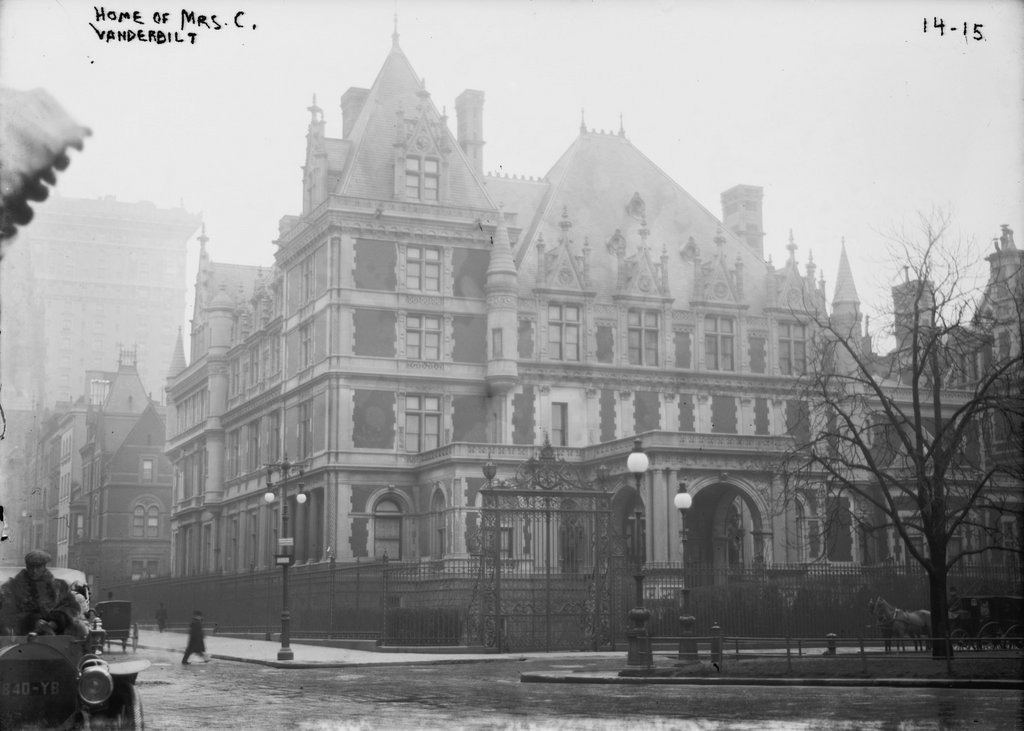 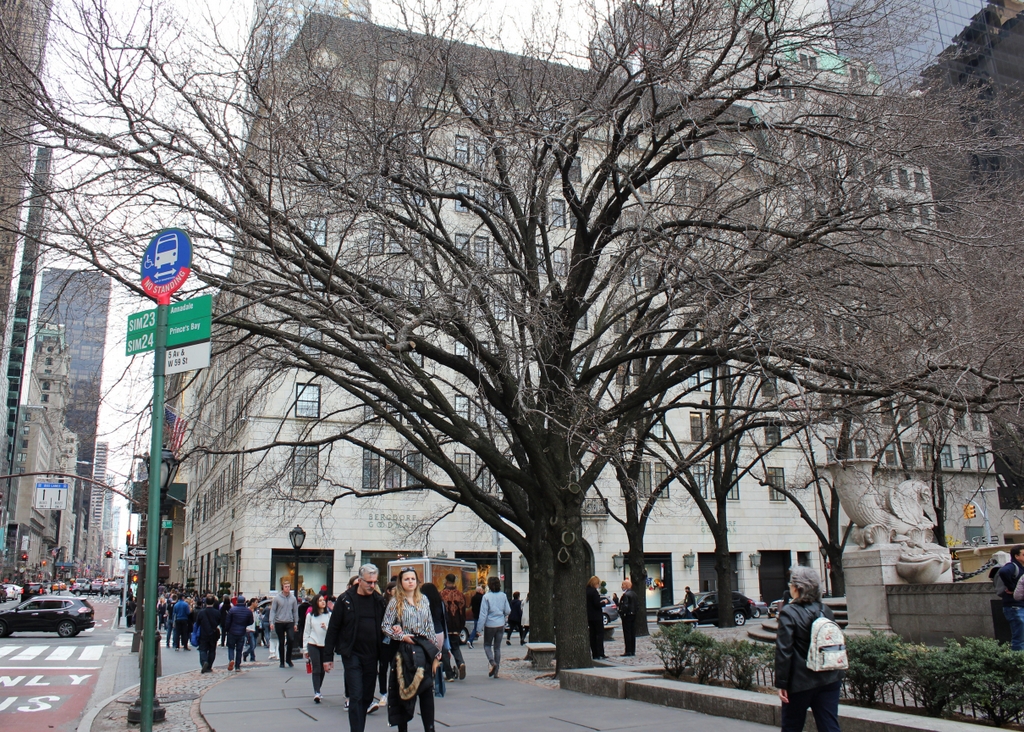 Perhaps no family is more closely associated with the Gilded Age than the Vanderbilts, who rose to prominence in the mid-19th century. The family patriarch, Cornelius Vanderbilt (1794-1877) gained his wealth through dominance of first the steamboat and then the railroad industries, and he left nearly all of his fortune to his son, William Henry Vanderbilt (1821-1885), who managed to double its value in just eight years before his death. At the time, he had a net worth of about $200 million, which was divided among his eight children.

While the first two Vanderbilt generations had grown the family fortune, the third generation primarily spent it. This included the construction of lavish mansions here on Fifth Avenue and summer homes in resort communities such as Newport. William Henry Vanderbilt had built homes a little south of here on Fifth Avenue in the early 1880s for himself and two of his daughters, but his children outdid him in their massive, costly houses.

One of his sons, William Kissam Vanderbilt (1849-1920) built the Petit Chateau on Fifth Avenue, along with Marble House in Newport, and his youngest child, George Washington Vanderbilt II (1862-1914) built the Biltmore in Asheville, North Carolina, the largest private home ever constructed in the United States. However, it was his eldest child, Cornelius Vanderbilt II (1843-1899) who built two of the most memorable Gilded Age mansions, with The Breakers in Newport, and his primary residence here on Fifth Avenue, between West 57th and West 58th Streets.

After the death of his grandfather in 1877, the younger Cornelius had inherited over $5 million, and in 1883 he used some of this money to built this five-story home. It was designed by architect George  P. Post, featuring a Châteauesque design with a red brick exterior and limestone trim. It was completed in 1883, and it was intended to surpass his younger brother’s Petit Chateau, which had been built a year earlier. At the time, the house was situated at the northwest corner of Fifth Avenue and West 57th Street (a photo in an earlier post shows a better view of that side of the house), and it was considerably larger than that of his brother’s.

However, this house was not large enough for Cornelius. He inherited nearly $70 million from his father in 1885, and he soon set about expanding his home. In 1887 he purchased five houses along West 58th Street and demolished them, clearing the way for an addition that would extend his mansion along the length of the entire block. This $3 million project was done to prevent any other mansions from rivaling it in size, and it was evidently successful, because the 130-room house remains the largest private residence ever built in New York City.

The work on the house was finished in 1893, two years before The Breakers was completed in Newport. However, Vanderbilt did not get to enjoy either house for very long, because he suffered a debilitating stroke in 1896 and died three years later, at the age of 55. His wife Alice (1845-1934) outlived him by many years, though, and she continued to live here well into the 20th century, alternating her time between here and Newport. The first photo was taken sometime within about a decade after Cornelius Vanderbilt’s death, showing the northern side of the house from Grand Army Plaza, near the southeast corner of Central Park. The part of the house in the foreground is the 1893 addition, with the original house partially visible in the distance on the left.

By the early 20th century, this section of Fifth Avenue had become increasingly commercialized, and many of the Gilded Age mansions were being demolished and replaced with new skyscrapers as New York’s elite moved northward into the Upper East Side. However, Alice Vanderbilt resisted moving, remaining here in the house until she finally sold it in 1926 for $7 million. She then belatedly joined the northward migration, moving about ten blocks uptown to East 67th Street.

The new owners of the property had no intention of keeping the house here. It had never been a particularly practical residence to begin with, as it was built more for show than for comfort. It was also expensive to maintain, requiring more than 30 servants just to care for the house and its sole occupant. Adding to this was the fact that, by the 1920s, this land had become far more valuable as commercial property. So, the house was demolished later in 1926, and the flagship Bergdorf Goodman department store was built here in its place.

The department store, completed in 1928, is still standing here, and it is still the home of Bergdorf Goodman. However, almost nothing remains from the first photo, as all of the other low-rise 19th century buildings on the surrounding blocks have also long since been demolished. The only surviving building from the first photo is the present-day Peninsula New York hotel, visible a few blocks away on the far left side of the scene. Built in 1905 as the Gotham Hotel, it was one of the early skyscrapers along this section of Fifth Avenue, and it looms over the mansions as an ominous sign of the commercial development that was steadily making its way uptown.