The Metropolitan Museum of Art, seen from the corner of 5th Avenue and East 83rd Street, around 1903. Image courtesy of the Library of Congress, Detroit Publishing Company Collection. 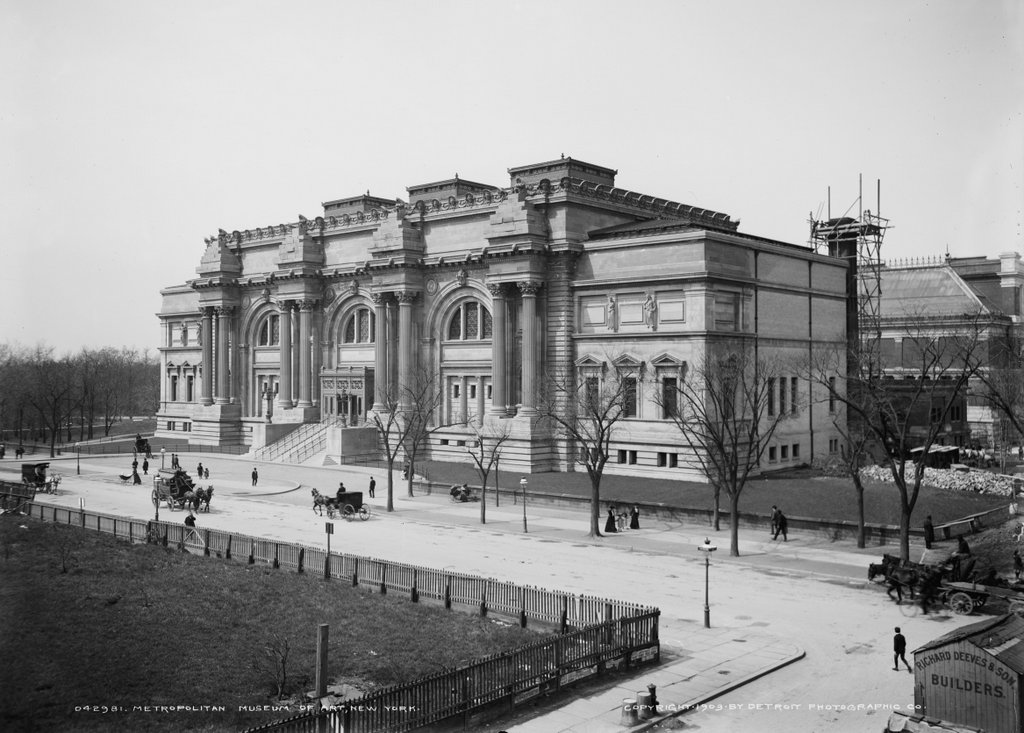 The view around 1904-1909. Image courtesy of the Library of Congress, Detroit Publishing Company Collection. 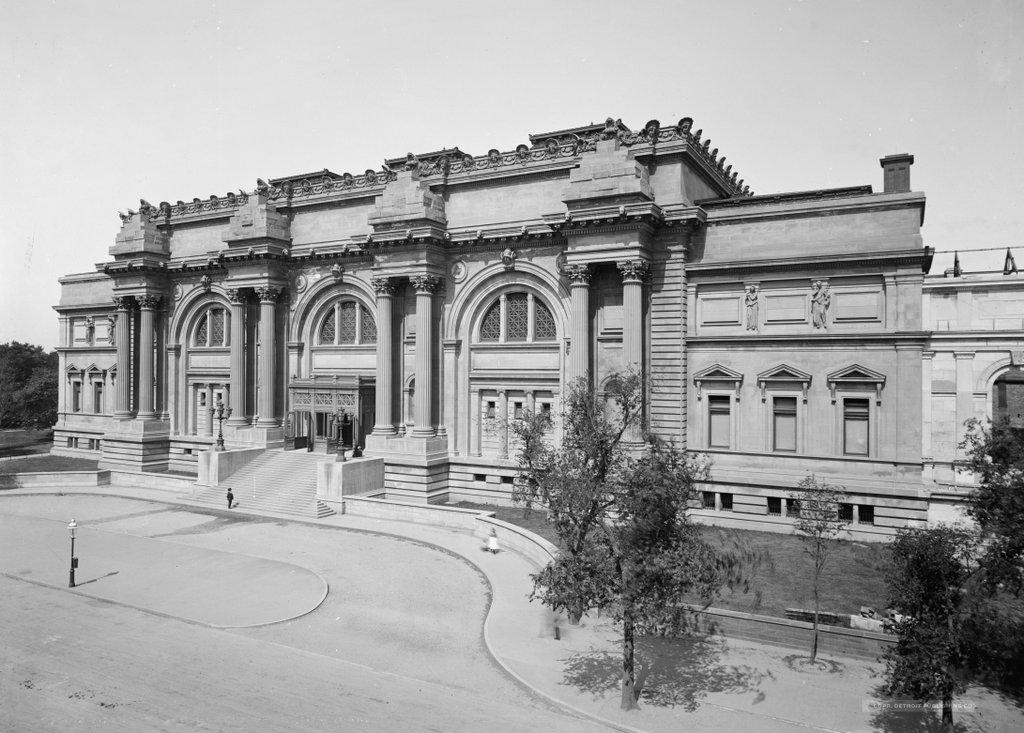 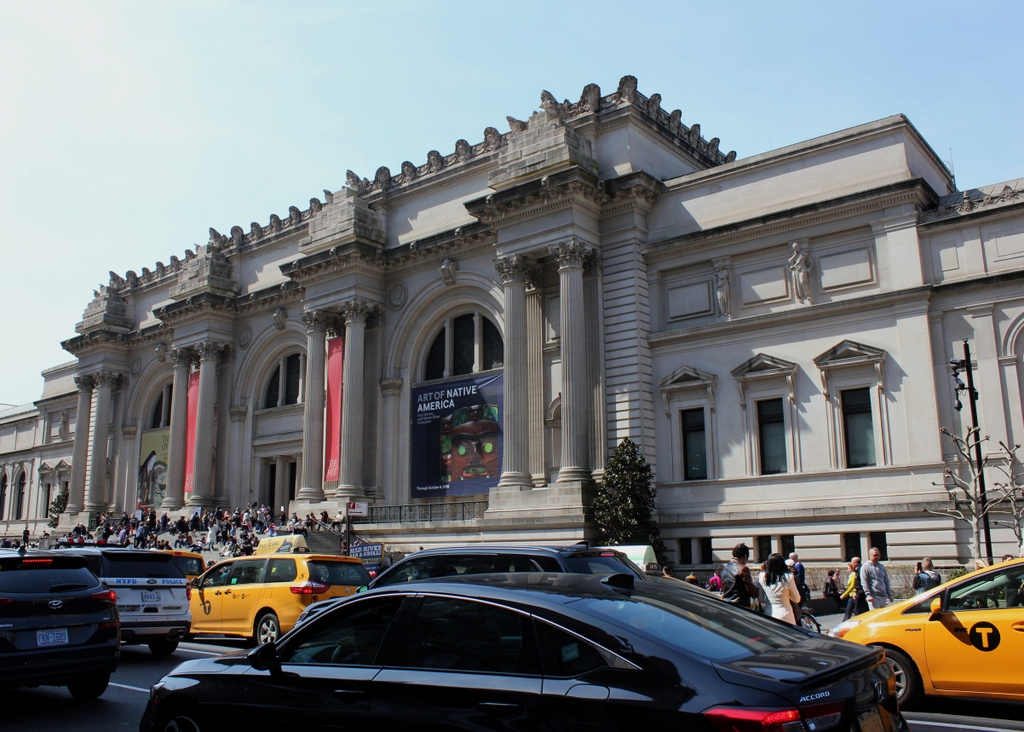 As discussed in more detail in the previous post, the Metropolitan Museum of Art has been at this location on 5th Avenue since 1880, but the building has been dramatically expanded and altered from its original appearance over the years. The first two photos here, taken only a few years apart, show some of this work in progress during the early 20th century.

The original museum building was set back from 5th Avenue, as were two additions that were constructed in the 1880s and 1890s. A portion of the northern wing, completed in 1894, is visible in the distance on the right side of the photo, but the rest of the 19th century museum building is hidden from view behind the 1902 addition, which stands in the foreground of this scene. This wing extended the museum all the way to 5th Avenue, and provided a grand main entrance that remains in use today.

This section of the building was designed by prominent architect Richard Morris Hunt, who is perhaps best remembered for designing Gilded Age mansions for affluent New York families such as the Vanderbilts. He was the first American to attend the École des Beaux-Arts in France, and this is reflected in his works, which are generally in the Beaux-Arts style. The museum expansion was among his last commissions, and he died in 1895, long before it was finished, so his son Richard Howland Hunt ultimately saw the project to completion.

The first photo was taken within about a year after this wing was completed. At this point, 5th Avenue was still not fully developed this far north, and there were still many vacant lots here in the vicinity of the museum, including one directly across the street in the foreground of the scene. The street itself was unpaved, and there are no automobiles in sight, but there is a mix of horse-drawn vehicles, including a delivery wagon on the extreme left, a stagecoach in front of it, and what appears to be a construction wagon on the far right. Next to this last wagon is the blurry image of a bicycle, and elsewhere there are a variety of pedestrians, including a man walking a small dog and several women with baby carriages.

Although the Hunt addition was only just finished, the museum was already preparing for further expansion. While architecturally impressive, it added little gallery space to the museum, as it consisted primarily of the Great Hall, which served as the museum’s main entrance, and the Grand Staircase, which connected the new wing to the original building. As a result, in 1904 the museum hired the architectural firm of McKim, Mead & White to design new wings, including one that extended north along 5th Avenue, on the right side of this scene.

The first photo does show some work occurring on the right side, although it does not seem clear as to whether this is related to the new wing or something else. However, by the time the second photo was taken a few years later, the expansion work was well underway. The exterior wall was largely completed by this point, but there was no roof yet, and the window here was an empty hole, with a brick wall visible beyond it. This project would eventually be completed in 1909, and four years later the northern side of the 5th Avenue facade was completed with the construction of another McKim, Mead & White addition.

As shown in the previous post, the museum would remain asymmetrical from this view for several years, but in 1917 a matching wing was built to the south, on the left side of this scene. This was the last significant change to the 5th Avenue side of the museum, but it would continue to expand to the rear, including a number of additions during the 1970s and 1980s. This incremental growth over the years has given the museum an interesting combination of architectural styles, and the original 1880 building is still standing, although it is now entirely surrounded by newer additions, with only small portions of the old exterior visible inside the building.