Looking south in the Great Hall in the Metropolitan Museum of Art, around 1907. Image courtesy of the Library of Congress, Detroit Publishing Company Collection. 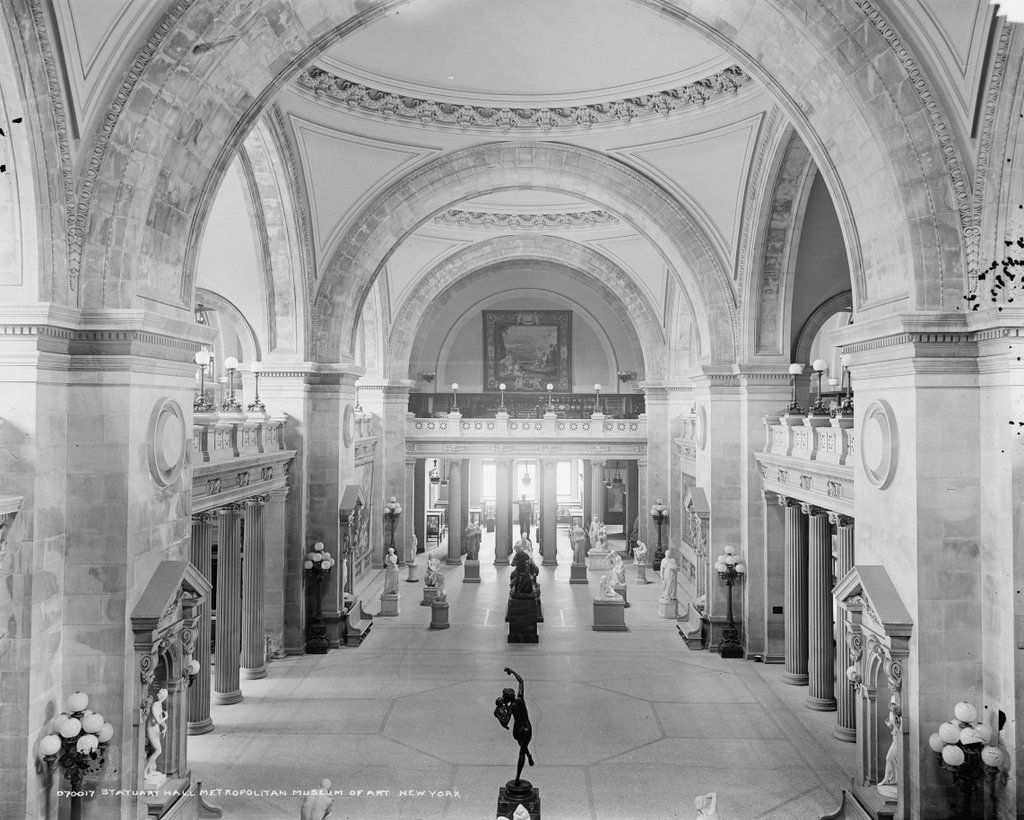 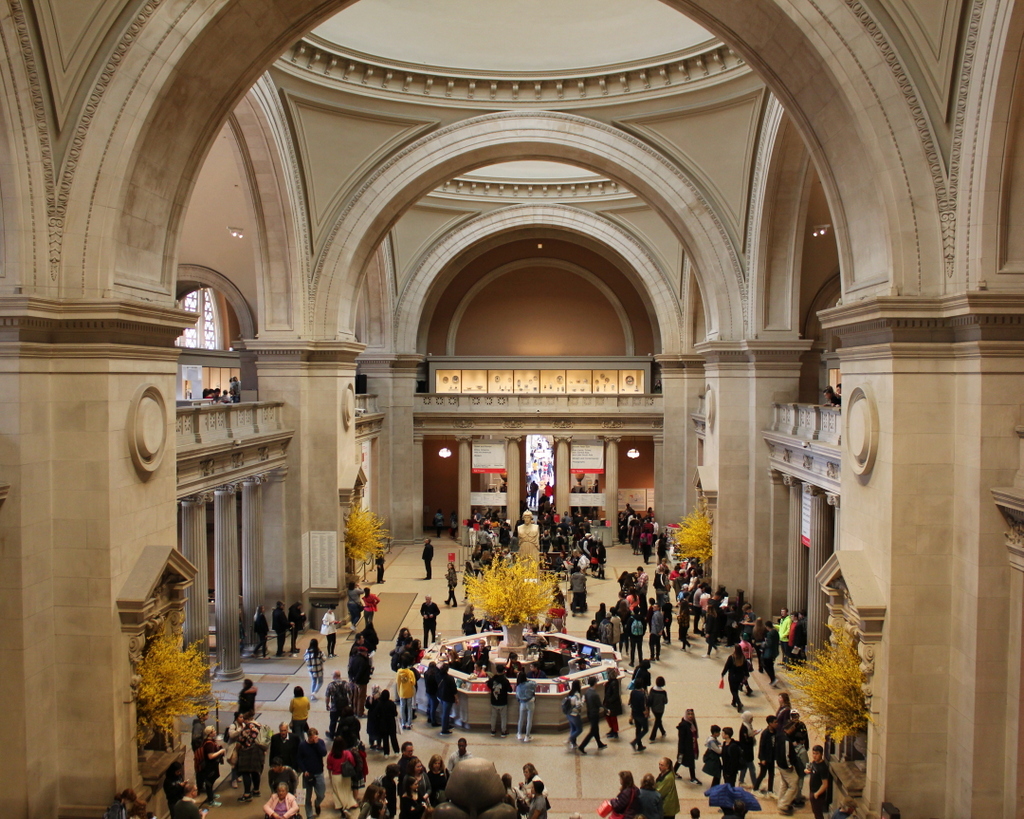 As discussed in an earlier post, the Metropolitan Museum of Art has been at its current location on Fifth Avenue since 1880, although it has gone through numerous expansions over the years. Perhaps the most architecturally-significant addition came in 1902, when a new main entrance was constructed in front of the older portion of the building. It was designed by prominent architect Richard Morris Hunt, and it featured ornate Beaux-Arts designs on both the exterior and interior.

The front entrance, located on the left side of the scene beyond the columns, opens into the Great Hall, which is shown here in this scene from the second floor balcony. Like the exterior, most of the interior here is made of limestone, and its ceiling consists of three domes supported by arches, which correspond to the three arches on the Fifth Avenue facade of the building. From here, visitors could proceed to the main portion of the museum by way of the Grand Staircase beyond the columns on the right, which was also designed by Hunt.

The first photo was taken within about five years after this wing was completed. At the time, the museum had a severe shortage of gallery space, and the Great Hall was used to display statues. This was probably not Hunt’s original intent for this space, though, and sculptor Augustus Saint-Gaudens criticized it for being inadequate for such use. In 1905, he remarked, as quoted in The Metropolitan Museum of Art: An Architectural History, about “the dismal failure of Hunt’s hall for sculpture there. It may be good architecture and a glorious bath of Caracalla thing, but it’s a damn bad gallery for the proper disposition of works of art.”

As the first photo shows, the collection on display here in the Great Hall included a mix of both ancient and modern works. Many of these works are still owned by the museum, and one of the most notable of these is Bacchante and Infant Faun, which stands in the bottom center of the photo. Created in 1894 by Frederick William MacMonnies, this bronze sculpture was a gift of architect Charles Follen McKim, whose firm of McKim, Mead & White would later design several large additions to the museum.

There are also at least three ancient sculptures here, with a large bronze statue of emperor Trebonianus Gallus (A.D. 251-253) standing between the columns in the distant center of the scene, and two headless statues of women on either side of it. The one on the left in this view is Greek, dating from the second half of the 4th century B.C., and the one on the right is a Roman copy of a Greek statue of Eirene, which was carved around A.D. 14-68. Both of these statues are now on display only yards away from where they once stood in the first photo, in a gallery beyond the columns in the distance.

Today, the Metropolitan Museum of Art has grown far beyond the confines of its early 20th century facility. The Great Hall is now used almost exclusively as an entrance hall, with only a few works on display here. In the present-day scene, there is an information desk in the center of the Great Hall, with ticket counters in front of the columns at both the north and south sides of the room. On the second floor balcony, on the left side of this view, is a cafe. Otherwise, though, the architecture itself has remained essentially unchanged since the Great Hall was completed more than a century ago, and it continues to welcome visitors into the museum, with nearly 6.5 million people passing through here in 2019.