The Wilson Hotel at the corner of Main and Holden Streets in North Adams, around 1901-1910. Image courtesy of the Library of Congress, Detroit Publishing Company Collection. 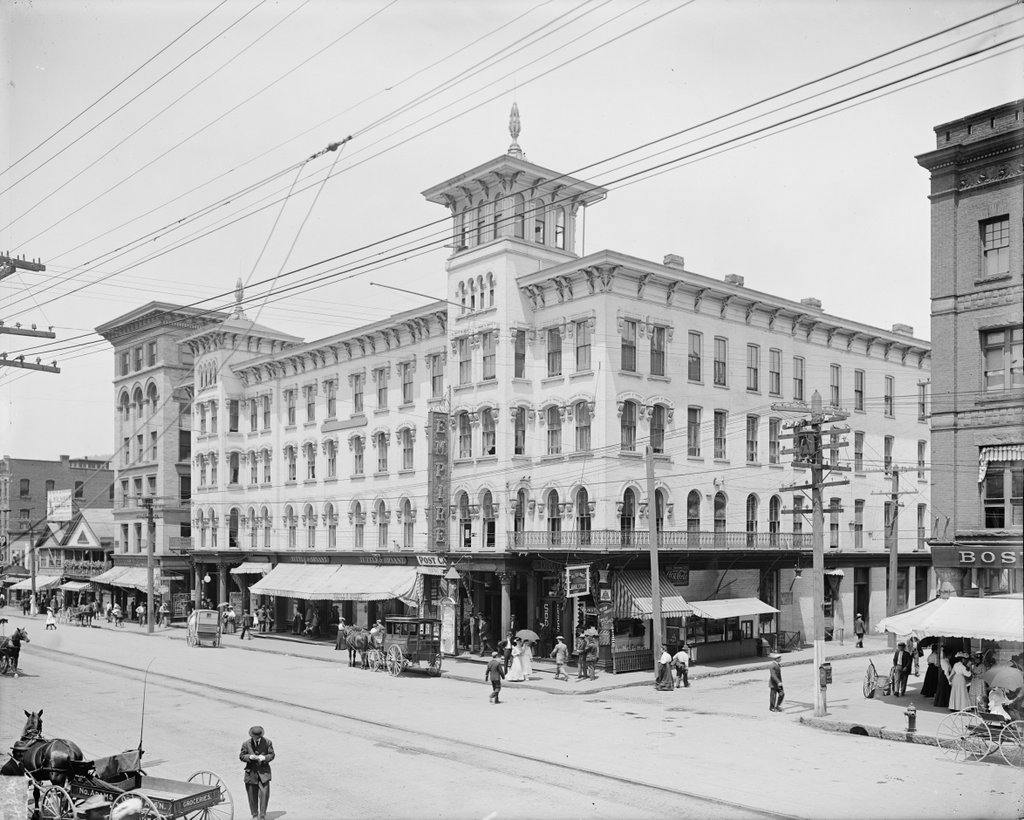 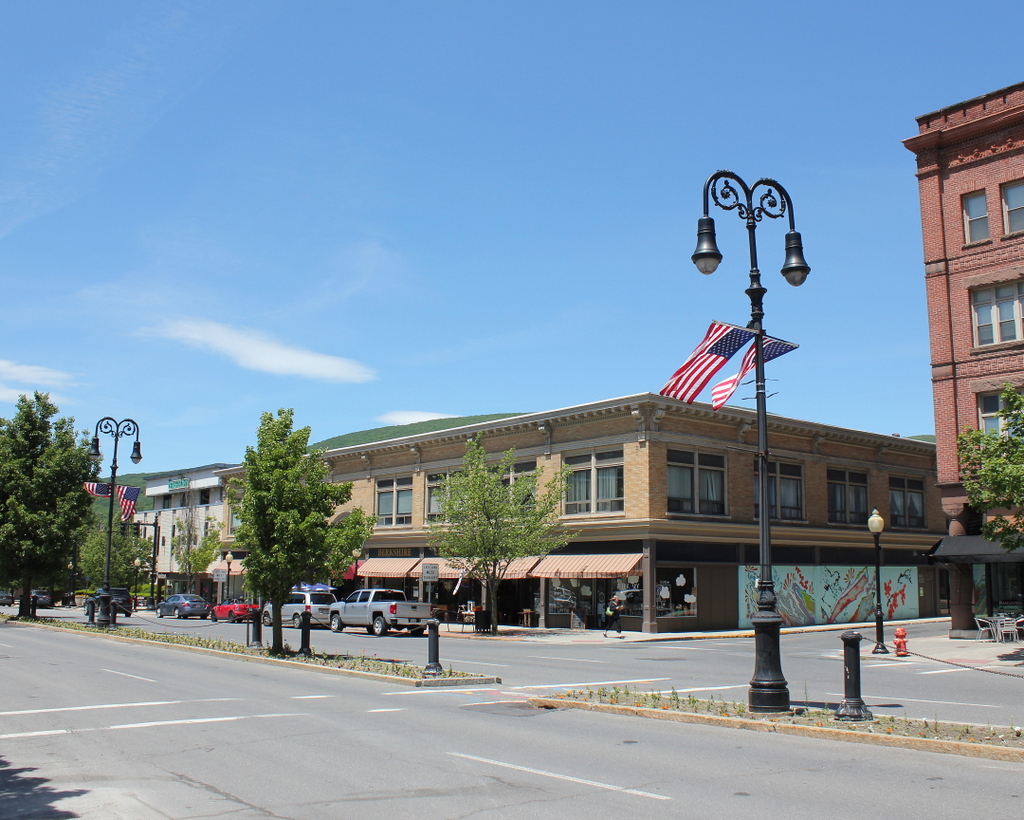 The Wilson Hotel, also known as the Wilson House, opened here in 1866. At the time, North Adams was still part of the town of Adams, but this village was a growing manufacturing center. Between 1860 and 1870, the town as a whole grew from under 7,000 to over 12,000, and much of this increase was here in the northern section, which had a population of over 10,000 by 1880, several years after it was incorporated as the town of North Adams. During this time, the town’s prosperity was also aided by the ongoing construction of the Hoosac Tunnel nearby. Begin in 1851 and completed in 1875, the tunnel gave the town railroad connections to the east, and also put it on one of the major east-west routes through New England.

The hotel was owned by Allen B. Wilson, a former North Adams resident and inventor who made significant improvements to sewing machines. His company, the Wheeler & Wilson Manufacturing Company, was one of the leading American sewing machine producers of the second half of the 19th century, and Wilson used some of his profits to build a hotel here in his old hometown.

The building stood here at the northwest corner of Main and Holden Streets, in the midst of North Adams’s central business district. It stood four stories in height, with an ornate Italianate-style exterior comprised of brick and cast iron. In addition to about a hundred guest rooms in the hotel, it also included eight stores on the ground floor, plus a hall that could seat about 800 to 1,000 people. The hotel was intended to serve both travelers and long-term boarders, and it featured modern conveniences such as indoor plumbing, gas lighting, steam heat, and a telegraph office.

Around the mid-1870s, Foster E. Swift became the proprietor of the hotel. He and his wife Frances narrowly escaped death in the Ashtabula River railroad disaster of 1876, one of the deadliest train wrecks in American history, and he subsequently purchased the hotel in 1880. It appears to have been a foreclosure sale of some sort, because he acquired it from the Adams National Bank for just $65,000, barely half of the cost to build it 14 years earlier.

The 1880 census shows Foster and Frances Swift living here at the hotel. Most of the other staff apparently lived here too, with the census listing a clerk, a steward, two porters, two cooks, 12 waiters, and 11 other employees. About half were immigrants, with many coming from Ireland and a few from England and Germany. In addition, more than half of the staff members were female, most of whom were single and between 18 to 30 years old.

Also during the 1880 census, there were 40 residents living here as boarders. Some were families, but most were men in their 20s or 30s who lived here without any other family members. The majority of these were railroad employees, including nine conductors, two clerks, two agents, and a railroad contractor. Nearly all of these men were listed as being married, but they were evidently working and living away from home at the time when the census was taken.

Swift continued to operate the hotel for the next few decades, and during this time he was even elected to the state senate, representing the northern Berkshire district in 1883. He remained here until around the turn of the century, and the property was subsequently sold to John F. Sullivan, who was running the hotel when the first photo was taken around 1901 to 1910.

The first photo shows a busy scene in front of the hotel. Although around 40 years old by this point, it was still considered one of the finest hotels in western Massachusetts, and it housed a variety of other businesses on the ground floor. In the center, with the large awning, was the dry goods store of Tuttle & Bryant. To the right of it was a small postcard shop, and at the corner in the foreground was the Wilson House Drug Store, which advertised Coca Cola for 5 cents at its soda fountain.

However, the largest sign here on the front of the building was for the Empire Theater, a 1,400-seat theater that opened in 1901. It was located in the rear of the hotel, but the entrance was here on Main Street, just to the left of the drug store. The theater was ultimately in existence for just over a decade, but it hosted at least one distinguished visitor when Theodore Roosevelt made a brief campaign stop here on April 29, 1912, during his bid to capture the Republican nomination for president. He spoke for 15 minutes to an enthusiastic crowd of about 2,000 people. It was reportedly the largest audience for a political speech in the city’s history, and Roosevelt himself remarked that “It was a bully crowd, it was a fine gathering.”

This event proved to be something of a last hurrah for the old Wilson Hotel, though. Just over two months later, the entire building, along with the Empire Theater and several other adjacent buildings, was destroyed in a massive fire. The fire, which was suspected to have been the work of an arsonist, began around 2:30 a.m. on the morning of July 2, in either the kitchen or laundry of the hotel. There were about 30 guests in the hotel at the time, and all of them were able to escape safely, although most lost all of their belongings. In the end, the fire caused about a half million dollars in damage, equivalent to over $13 million today, and it completely gutted the old hotel, leaving only the burned-out brick shell still standing.

In the aftermath of the fire, the site here on Main Street was soon rebuilt, although on a much smaller scale. Instead of the grand four-story, 100-room hotel, its replacement was a far more modest two-story commercial block. This building has survived far longer than its predecessor, though, and it is still standing here, as shown in the present-day scene. It is one of a number of historic buildings that line the north side of Main Street in North Adams, and it is part of the Monument Square – Eagle Street Historic District on the National Register of Historic Places.