The main entrance to Union Station on Broadway in Albany, around 1900-1906. Image courtesy of the Library of Congress, Detroit Publishing Company Collection. 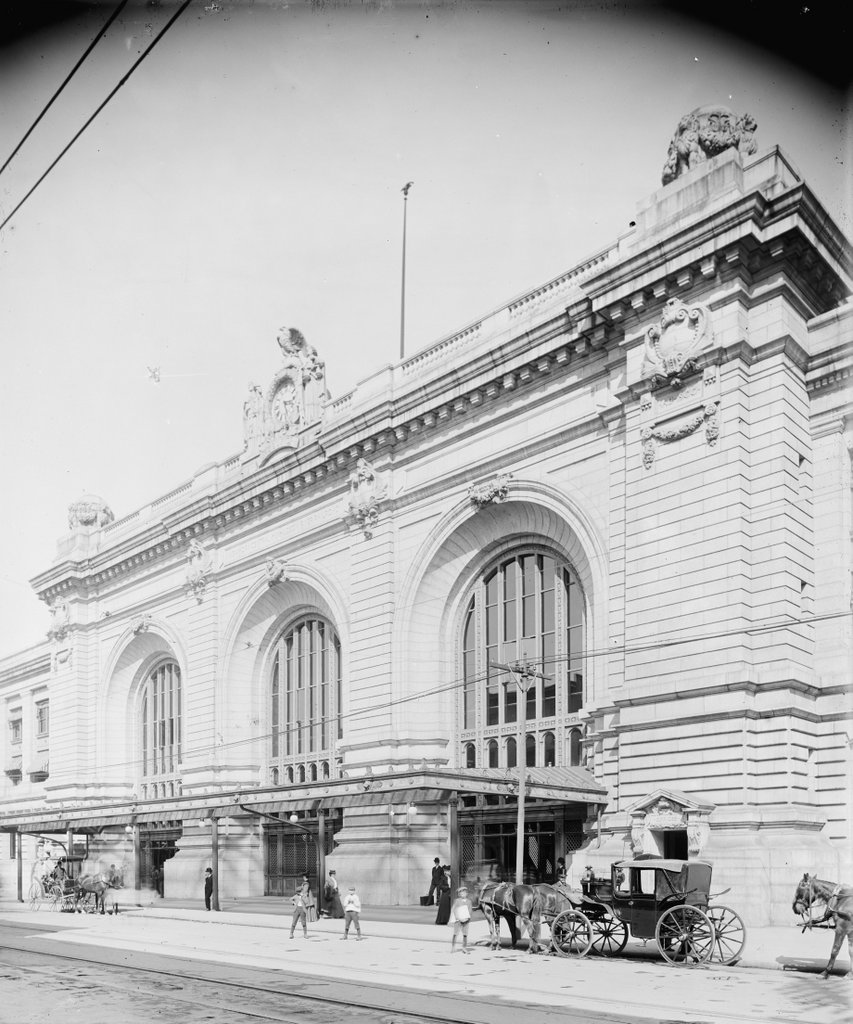 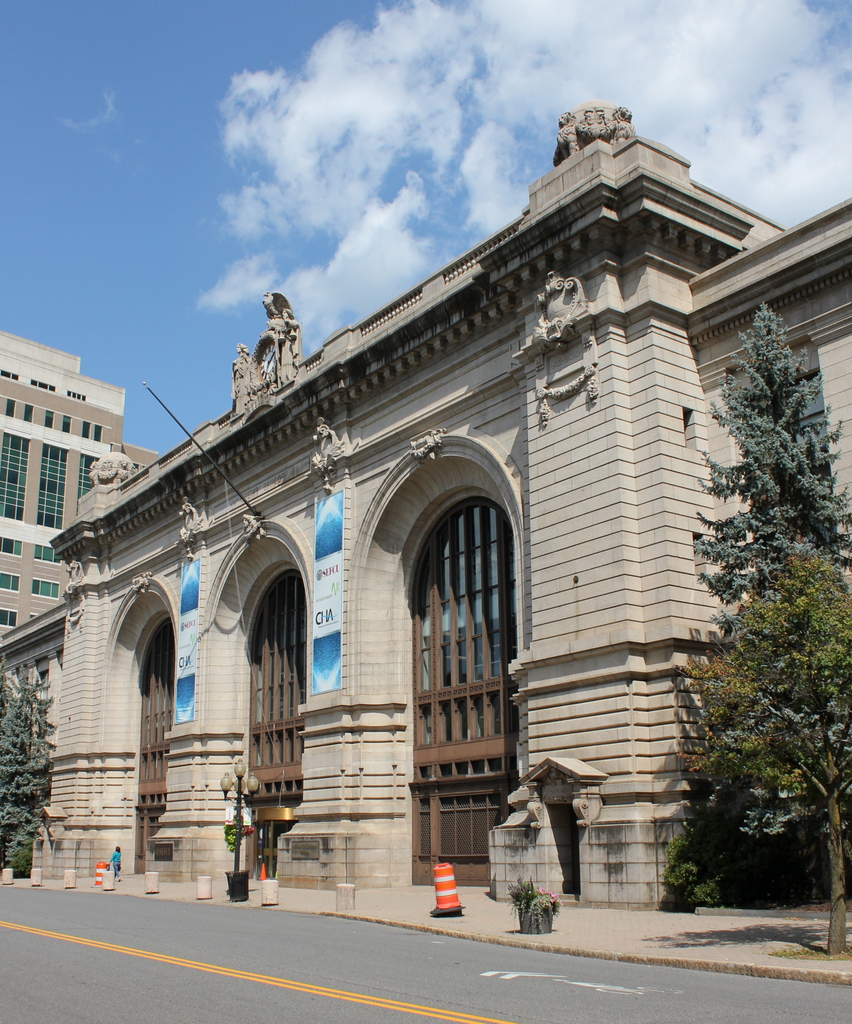 This view of Union Station is similar to the one in the previous post, but provides more of a close-up view of the central part of the building, with the main entrance in the foreground. As explained in that post and an earlier one, the station opened in 1900, and it served passengers of the New York Central and Hudson River Railroad, the Delaware and Hudson Railway, the West Shore Railroad, and the Boston and Albany Railroad. The latter two railroads were owned by the New York Central, so overall the railroad was responsible for two-thirds of the daily trains here. This is emphasized by the fact that the New York Central’s name is engraved here on the facade in the first photo, directly above the central arch.

The station was designed by the Boston-based architectural firm of Shepley, Rutan and Coolidge, with a Beaux-Arts style that was popular for public buildings of the era. The three arches here at the main entrance are the most distinctive architectural elements of the building, and in some ways they foreshadow the similar arches used more than a decade later when the New York Central built Grand Central Terminal more than a decade later.

Above the arches are a number of carvings, including a clock in the center atop the building, which is incorporated into the New York state seal. To the left of the clock is a figure representing Liberty, and to the left is Justice. An eagle is perched atop a globe above the clock, and underneath the clock is the inscription “Excelsior,” the state motto of New York. Other prominent carvings include large globes atop the corners, each of which is supported by four lions.

The first photo was taken soon after the station opened, and it shows an interesting mix of people outside the station. There are no cars visible on the street, but there are two horse-drawn vehicles, with an expensive-looking coach in the foreground on the right, and a more modest carriage further in the distance on the left side of the scene. Several people appear to have been watching the photographer, including a man with a top hat just beyond the coach, a man beneath the right arch with a briefcase and bowler hat, and three young newsboys who are standing in the street. Others seem indifferent to the camera, including at least three women walking along the sidewalk in front of the station, and another man in a bowler hat who is smoking a pipe and casually leaning against a column.

Union Station continued to be used by the railroads well into the mid-20th century, but by the 1950s ridership was in a steady decline, here in Albany and around the country. The station ultimately closed in 1968, ending passenger rail service into downtown Albany. To replace it, the railroad built a new, much smaller station across the river in Rensselaer.

The old station here in Albany was in limbo throughout the 1970s, and it was the subject of several different proposals, including demolition. However, it was ultimately restored as an office building in the late 1980s by Norstar Bancorp, whose name still appears on the facade in the spot where the New York Central’s name was once located. After a series of bank mergers, the building eventually became offices for Bank of America until 2009, and it is now occupied by several different tenants. Despite these changes in use, though, the exterior remains well-preserved, and the only significant difference here in this scene is the loss of the iron canopy above the entrance.