Looking east on Chestnut Street from the corner of Sixth Street in Philadelphia, in June 1851. Image courtesy of the Library Company of Philadelphia, Frederick De Bourg Richards Photograph Collection. 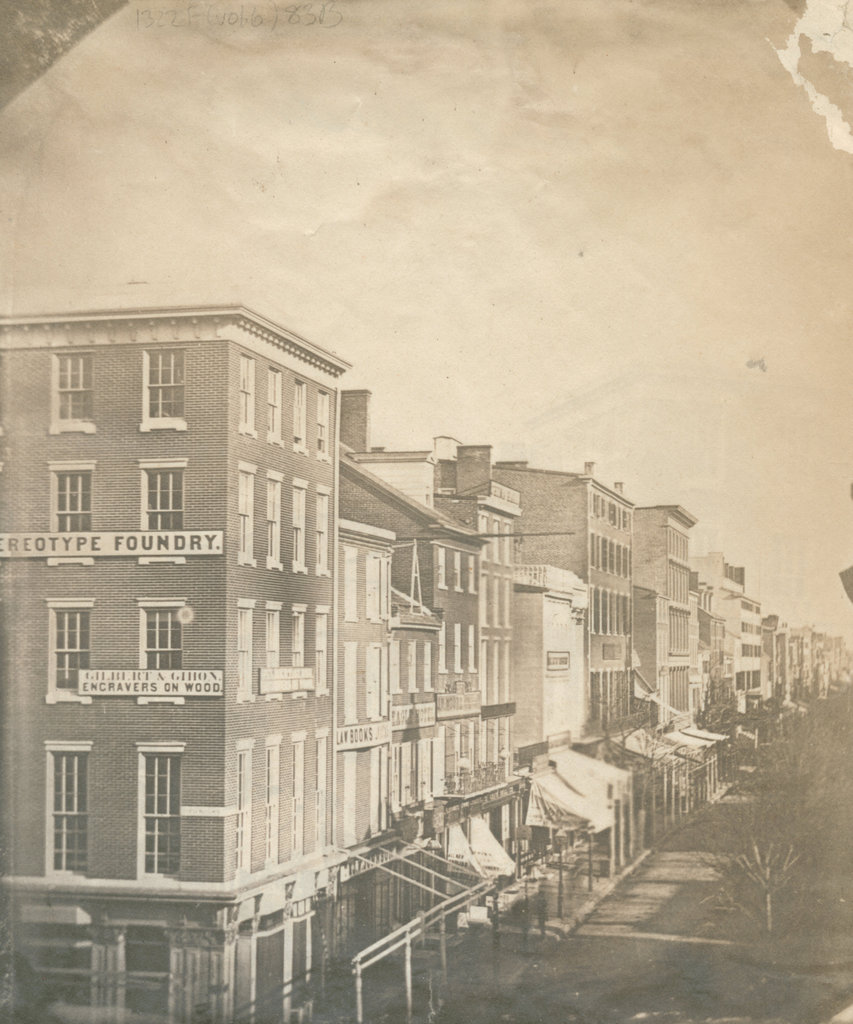 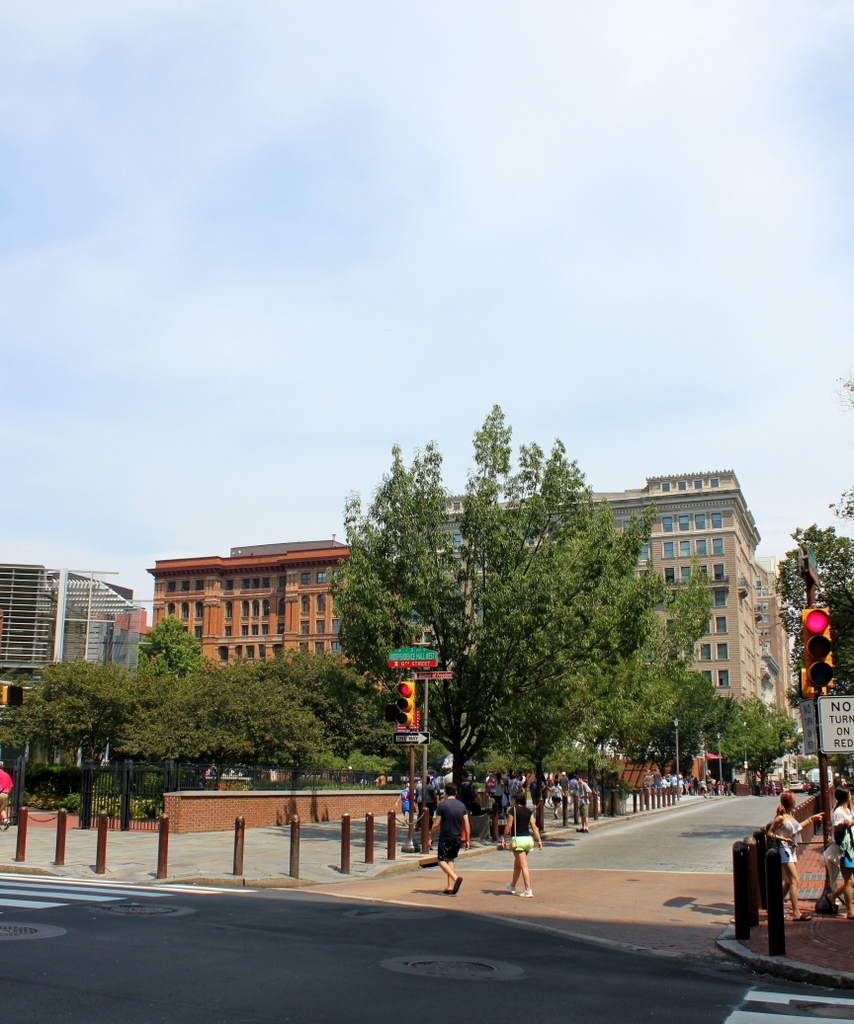 The first photo is a print made from a daguerreotype that was taken in June 1851, looking east along Chestnut Street from the corner of Sixth Street. The photo shows a mix of brick commercial buildings, mostly ranging from three to five stories in height. They stood directly opposite Independence Hall, which is just out of view on the right side of the scene. Based on their architectural style, the buildings with the sloped roofs were likely older, probably from the early 19th century, while the ones with flat roofs were likely from around the 1840s.

In the foreground of the first photo, on the left side of the scene, is Hart’s Building, a five-story building constructed only a few years earlier in 1848 by publisher Abraham Hart. This building housed a number of commercial tenants. By late 1851 these included, on the first floor, a hat store, a bookstore, a draper and tailor, a music dealer, a Venetian blind manufacturer, another tailor, a shaving saloon, a cigar store, and a musical instrument manufacturer. The second floor housed a billiard saloon, along with Sattler’s Cosmorama, which appears to have been an art gallery of some sort. On the upper floors, the building housed several different businesses involved in the publishing industry, including wood engraver William Gihon, bookbinder John F. Ducomb, Butler’s copper plate printing, and Mears’s Stereotype Foundry.

Further down Chestnut Street, just to the right of Hart’s Building, was the law book publishing firm of T. & J. W. Johnson. Beyond it was the three-story Eagle Hotel, followed by a four-story building occupied by bookseller J. W. Moore. His bookstore was located on the first floor, and other tenants of the building included a restaurant and a boarding house. The only other building with legible signs in the first photo is the five-story building in the center of the scene. It has a large sign atop it that reads “China Hall,” and it was occupied by William J. Kerr, who sold china and other imported goods.

This scene was dramatically altered only months after the first photo was taken. In the early morning hours of December 27, 1851, a fire broke out in Hart’s Building, in the third floor drying room of Butler’s copper plate printing offices. Firefighting efforts were hampered by below-zero temperatures, which froze some of the water sources. Because of this, plus the amount of flammable materials stored inside it, the entire building was soon engulfed, and firefighters began trying to save the surrounding buildings.

In the end, Hart’s Building was a total loss, and was insured for only $10,000 of the estimated $100,000 that it would cost to replace it. The neighboring book publishing building was also completely destroyed, at a cost of about $50,000, and the Eagle Hotel likewise suffered heavy damage. The building beyond the Eagle Hotel was only minimally damaged, but the fire also spread across Sixth Street and damaged or destroyed several other properties. There were even fears that the fire might spread across Chestnut Street to Independence Hall, but the famous landmark ultimately escaped damage.

Even worse than the property loss, though, was the loss of life from the fire. Contemporary newspaper articles give different reports on the death toll, but there appear to have been at least five fatalities. The early accounts mentioned two unidentified African Americans who were killed by falling debris, along with a police officer named Johnson who was also killed in the fire. As workers sifted through the debris, though, they uncovered the bodies of William H. Haly and William Baker. Haly, a lawyer and former state legislator, was probably the most notable victim of the fire. However, his body was burned to the point where it was indistinguishable from Baker’s body, so the two men were buried together in the same coffin.

A number of other people were badly injured in the fire, including at least three other police officers and a fireman. One of the officers, Thomas Grant, was pulled from the wreckage while on fire, and was described as having been “bruised in a shocking manner.” Newspaper accounts gave little hope for his recovery, but it seems unclear as to whether he ultimately succumbed to his injuries.

The damaged area was rebuilt soon after the fire, and for the next century this block of Chestnut Street continued to feature a mix of low-rise commercial buildings. However, this all changed in the mid-20th century, as part of an urban renewal project to create Independence Mall, a three-block park area with Independence Hall at its southern end. As part of this, all of the buildings between Fifth and Sixth Streets were demolished, from Chestnut Street up to Race Street, with the sole exception of the Free Quaker Meeting House on Arch Street. This included all of the buildings that stood in this scene, although it seems as though few, if any, of the buildings from the 1851 photo were still standing by that point anyway.

Today, the Independence Mall is part of the Independence National Historical Park, and it remains mostly open parkland, with a few modern buildings running along the Sixth Street side. Here at the corner of Sixth and Chestnut Streets, just out of view on the far left side of the scene, is the Liberty Bell Center, which houses the famous bell across the street from its original location at Independence Hall.