The Frary House on Old Main Street in Deerfield, around 1900-1904. Image courtesy of the Library of Congress, Detroit Publishing Company Collection. 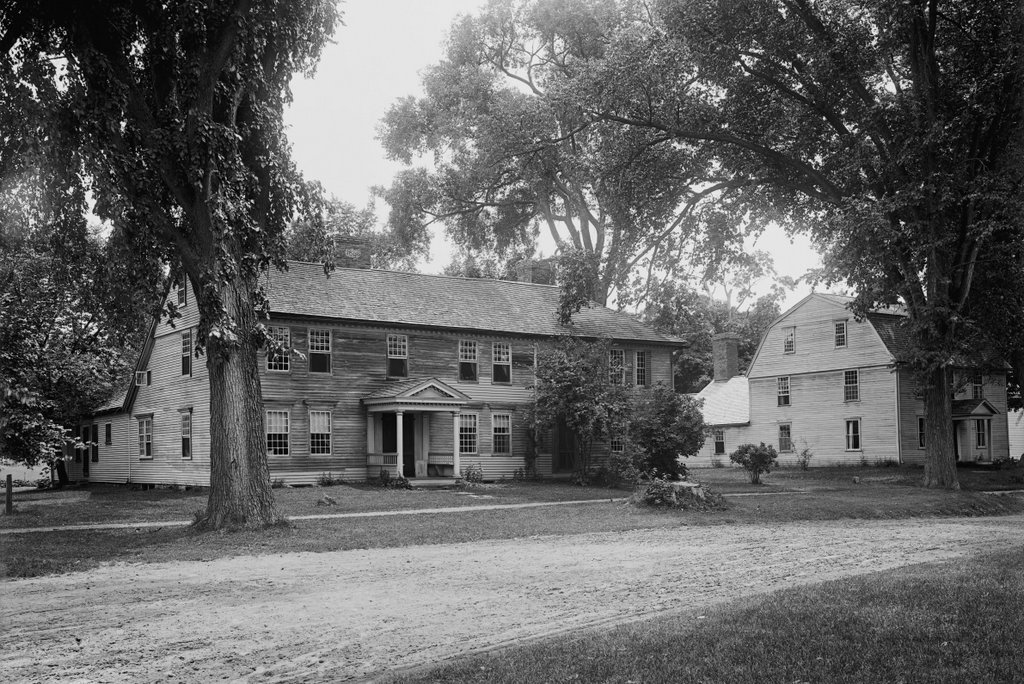 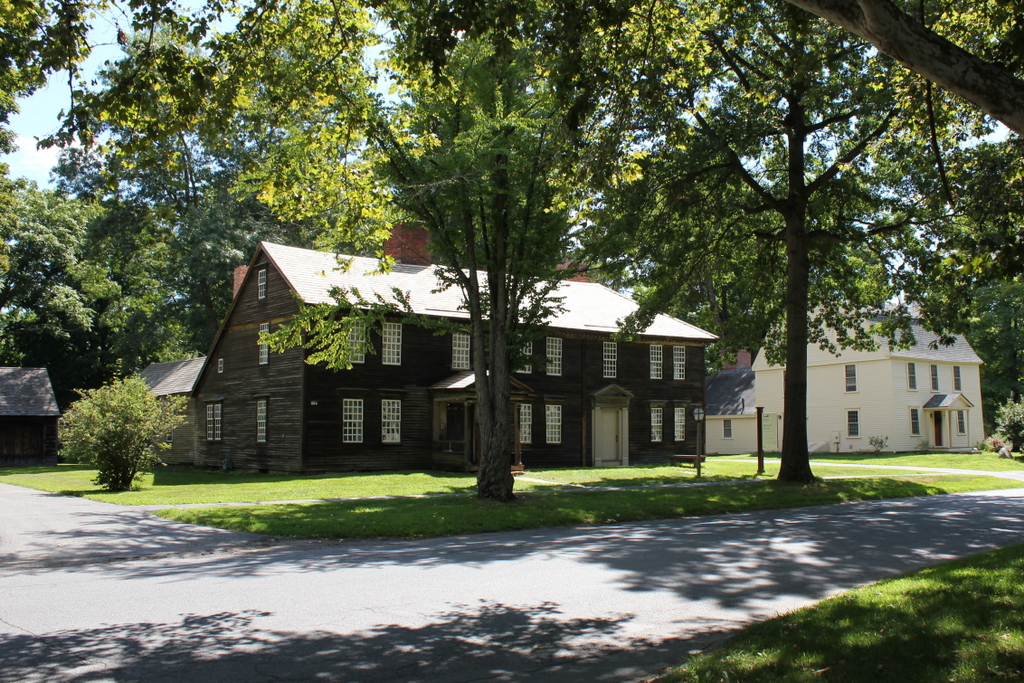 The Old Deerfield Historic District is a National Historic Landmark, which is the highest level of recognition on the National Register of Historic Places. The well-preserved New England village features 53 historic buildings, with over 30 that date back to the American Revolution or earlier. Among these is the Frary House, seen here in these photographs.

When the first photo was taken, the house was believed to have been built in 1698 by Samson Frary, one of the original settlers of Deerfield. However, dendrochronology has since shown that it was built around 1758, although it is possible that portions of the house may date back to 1698. If so, it would make it one of possibly two houses that predate the 1704 Indian attack on the village. Either way, though, the house is unquestionably old, and historically significant.

The left side of the building is the oldest, and dates back to about 1758, when it was owned by Salah Barnard. He operated a tavern out of the house, and in 1775 Benedict Arnold stopped here on his way north to capture Fort Ticonderoga. The American Revolution had started just weeks earlier, and Deerfield had a large number of loyalist residents, yet Arnold managed to acquire provisions for his men here at the tavern while at the same time maintaining the secrecy of his mission.

The most significant change to the building came around 1795, when Barnard added a larger tavern to the right side of the building. Like many other New England taverns of the era, it not only provided food, drink, and lodging for visitors; it also served as the social center of the town, and would have been used as a meeting place for a variety of local events. Salah Barnard died the same year that the addition was completed, and his son Erastus inherited the building and operated the tavern for the next ten years, until he moved away from Deerfield.

The property was eventually purchased in 1890 by Charlotte Alice Baker, a descendant of Samson Frary, the building’s purported original owner. She hired the Boston architectural firm of Shepley, Rutan & Coolidge to restore it to its original colonial appearance, and the work was complete by the time the first photo was taken. Today, the Frary House/Barnard Tavern is owned by Historic Deerfield, a museum that owns a number of historic properties in the village.

Along with the Frary House and Barnard Tavern, this scene shows one other historic home. Just to the right of the tavern is the Nims House, which predates the Frary House by over a decade The original house on this site was built around 1685 by Godfrey Nims, but was destroyed in the 1704 Indian raid. It was rebuilt in 1710, and portions of this house might still be standing, but most of the present-day home dates back to sometime between the 1720s and 1740s. It remained in the Nims family until the 1890s, and it is now owned by Deerfield Academy, who uses it for faculty housing.

The First Church of Deerfield on Old Main Street, around 1891. Image from Picturesque Franklin (1891). 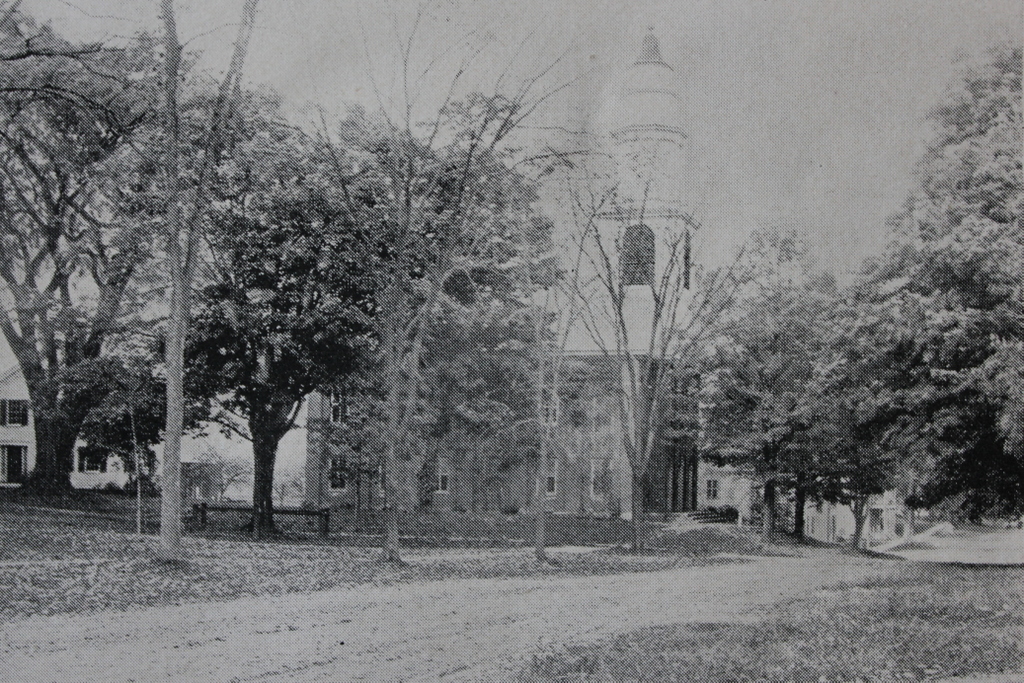 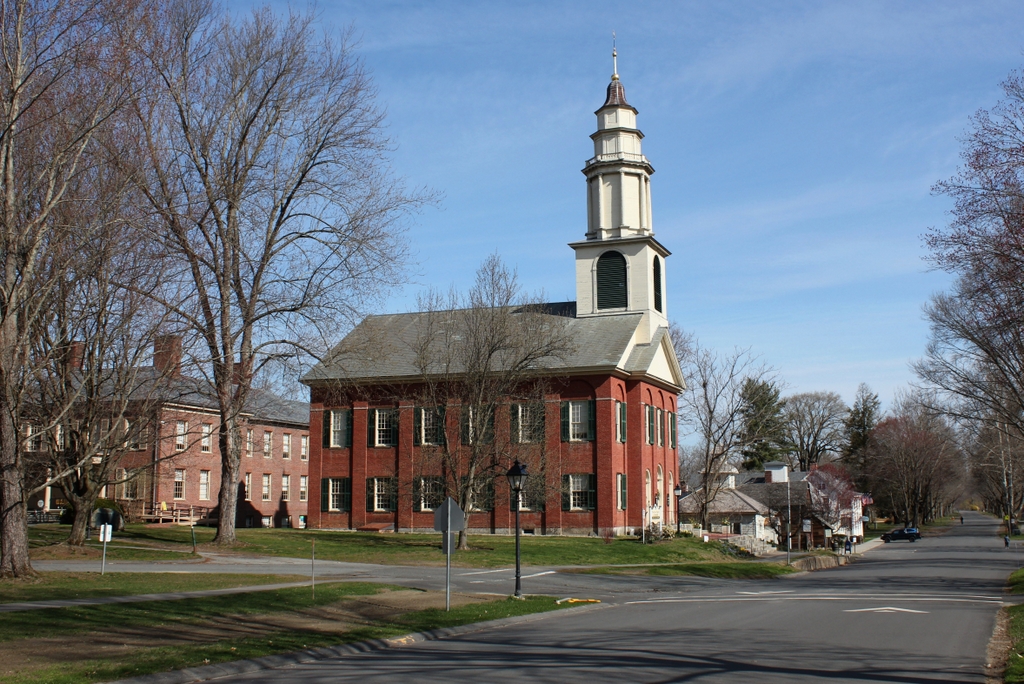 Deerfield’s Old Main Street is a remarkably well-preserved New England village, with a number of historic homes and other buildings dating back to the 18th and early 19th centuries. The entire village is included in the Old Deerfield Historic District, which is listed as a National Historic Landmark on the National Register of Historic Places. One of the most prominent buildings in the district is the First Church of Deerfield, also known as the Brick Church. Although not as old as many of the nearby homes, the church has been at the center of the village for nearly 200 years.

It was built in 1824 and designed by architect Winthrop Clapp, although it was virtually a copy of the Second Congregational Church in Greenfield, which had been built in 1819 about three miles away. The Greenfield church had been designed by Isaac Damon, whose other works included churches in Springfield, Northampton, and Southwick. Although he did not actually design the Deerfield church, his influence is still evident, and it bears a strong resemblance his other churches.

Damon’s Greenfield church has long since been demolished and replaced with the present-day building, but the Deerfield church is still standing. Its interior was restored to its original appearance in 1916, and today the building still houses an active Unitarian-Universalist congregation. The brick exterior has remained essentially the same as it was when it was built, and its surroundings have also changed very little, with the village still retaining its appearance as a small, colonial-era community.