The house at 175 Mill Street in Springfield, around 1938-1939. Image courtesy of the Springfield Preservation Trust. 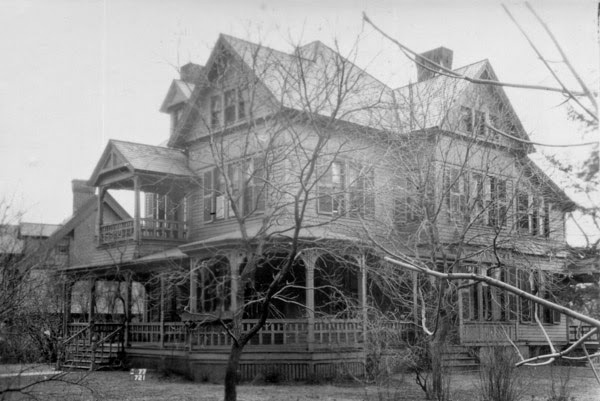 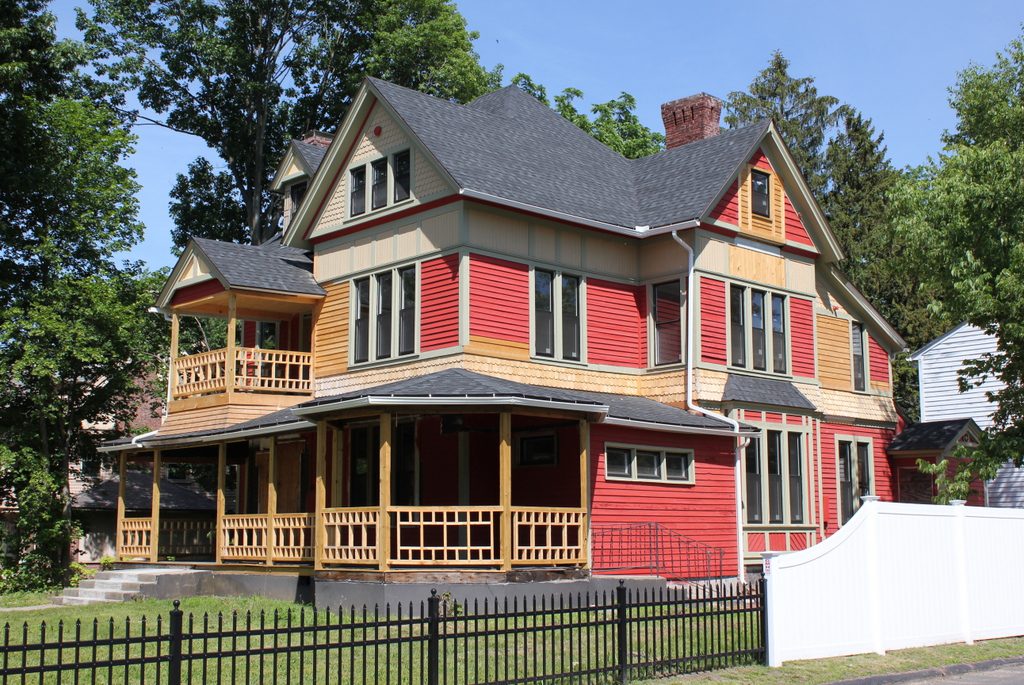 This house was built around 1890, and was originally the home of Hannah E. Griffin, an elderly widow whose son, Solomon B. Griffin, was the managing editor of the Springfield Republican. According to the 1899 city atlas, Solomon owned the house, although he and his wife Ida were living on Round Hill at the time, with Ida’s mother. During the 1900 census, Hannah was 80 years old, and was living in this house with her unmarried daughter Mary, as well as a servant. Hannah lived here until her death in 1903, and the following year Solomon built his own house on an adjacent lot, which is visible in the distance on the left of both photos.

Solomon’s sister Mary continued to live here until the late 1910s, and by 1920 the house was the home of Solomon’s son Courtlandt and his newlywed wife, Alice. Courtlandt was a salesman for the Carew Manufacturing Company, a paper manufacturer in Holyoke, and he and Alice lived here for several years, before moving to Sumner Avenue around 1924. The house was subsequently rented to Charles C. Ramsdell, the vice president of the  Gilbert & Barker Manufacturing Company, a West Springfield-based company that made gasoline pumps, oil burners, and similar equipment. He and his wife Marguerite lived here until around 1927, but by the end of the decade they had moved to an apartment at the Hotel Kimball on Chestnut Street.

This house sat vacant for several years, but by the early 1930s it was being rented by Dr. Arthur Edgelow, an English-born physician who lived here with his mother Caroline, his wife Cybel, and their four young daughters: Carol, Catherine, Honour, and Margaret. They were still living here when the first photo was taken in the late 1930s, and the 1940 census shows them paying $80 per month in rent, while also employing two maids. However, the family only lived here for a few more years before moving to a house on Oxford Street in the Forest Park neighborhood.

Over the years, the house declined to the point where, by the early 2000s, it was tax-foreclosed and vacant. The house remained abandoned and boarded-up until 2015, when it was purchased from the city and restored. At some point over the years the porches had been enclosed, so part of the restoration included rebuilding these to match their original appearance, and today the house does not look much different from how it looked when the first photo was taken nearly 80 years ago.

The house are 185 Mill Street in Springfield, around 1938-1939. Image courtesy of the Springfield Preservation Trust. 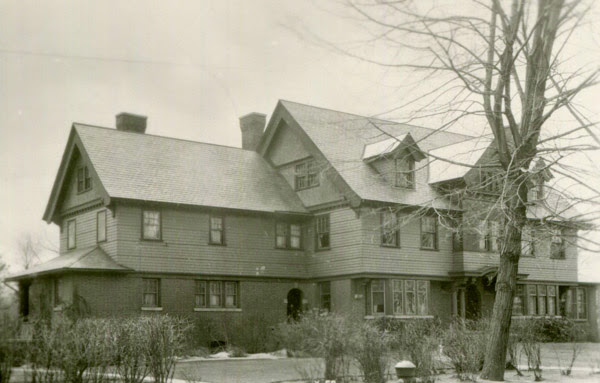 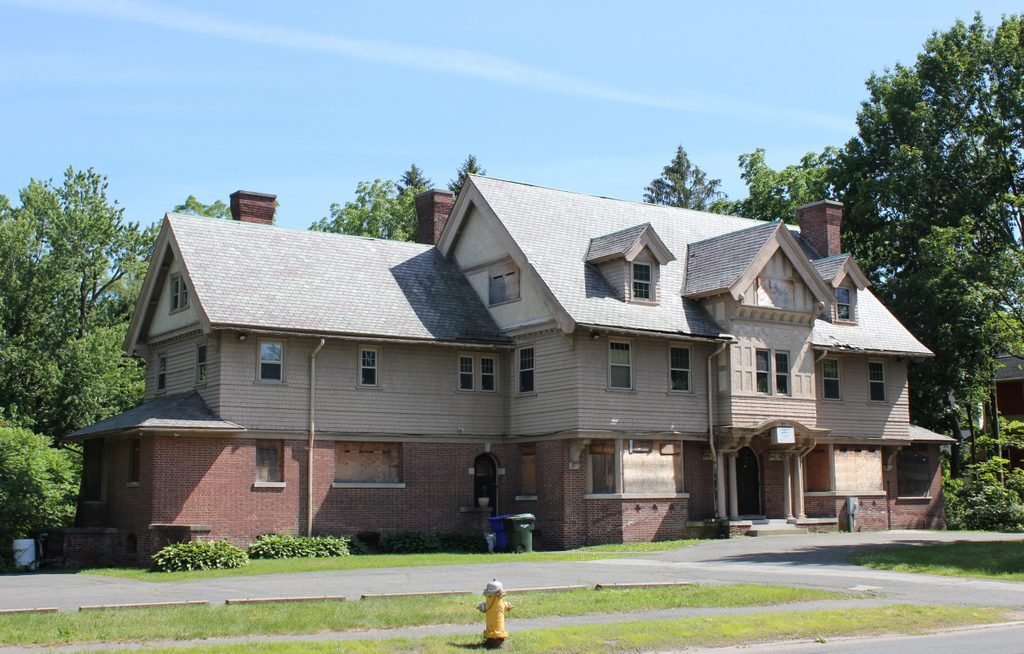 This large Tudor Revival-style home was built in 1904 for Solomon B. Griffin, the managing editor of the Springfield Republican. Born in Williamstown, Massachusetts in 1852, he attended Williams College, where his father was a professor and librarian. However, because of poor health he did not graduate, and after leaving college he came to Springfield, where he was hired by Republican editor Samuel Bowles as a member of the newspaper staff. Although he started out as a reporter, he soon earned greater responsibilities, first becoming the local editor and then, in 1878, the managing editor.

Solomon Griffin was a bachelor for much of his adult life, but in 1892 he married Ida M. Southworth, the 34-year-old daughter of the wealthy paper manufacturer John H. Southworth, who had died the year before. After their marriage, Solomon and Ida lived with her mother Elizabeth in the Southworth mansion on Round Hill in the North End, where they raised their two sons, Bulkley and Courtlandt. However, Elizabeth died in 1901, and within a few years the family had this house built on Mill Street, directly adjacent to 175 Mill Street, which Griffin had owned since the 1800s.

The house was situated on a large lot, extending along the south side of Mill Street from Pine Street to Maple Street, and all the way back to the Mill River. A century earlier, the property had been the home of David Ames, Sr., an early Springfield industrialist who served as first superintendent of the armory, and the lot was later sold to Horace Smith, the co-founder of Smith & Wesson. The old Ames house was demolished around 1890, and by the time Griffin purchased the property the lot was vacant. He built this house on the northwestern corner of the property, along with a carriage house on the opposite side of the lot, set back from the road.

Solomon Griffin remained the managing of the Springfield Republican for more than 40 years, before finally retiring in 1919, and he lived here in this house until his death in 1925. In the meantime, though, his son Bulkley was also involved in the newspaper business, starting out as a reporter for the Republican before establishing the Griffin News Bureau in 1922. He was a veteran of World War I, and he would also go on to serve as a war correspondent in Europe during World War II.

After her husband’s death, Ida continued to live in this house for the rest of her life. During the 1930 census, the property was valued at $100,000, or about $1.5 million today, and Ida was living here alone except for a servant and a cook. She was still here when the first photo was taken in the late 1930s, but she died soon after, in 1940. The property was subsequently acquired by Amity Lodge of the International Order of Odd Fellows, who continue to hold their meetings here more than 75 years later. Along with the rest of the surrounding neighborhood, the house is now part of the Ames/Crescent Hill District on the National Register of Historic Places.