Looking north on Thames Street from the corner of Pelham Street in Newport, in August 1906. Image courtesy of the Providence Public Library. 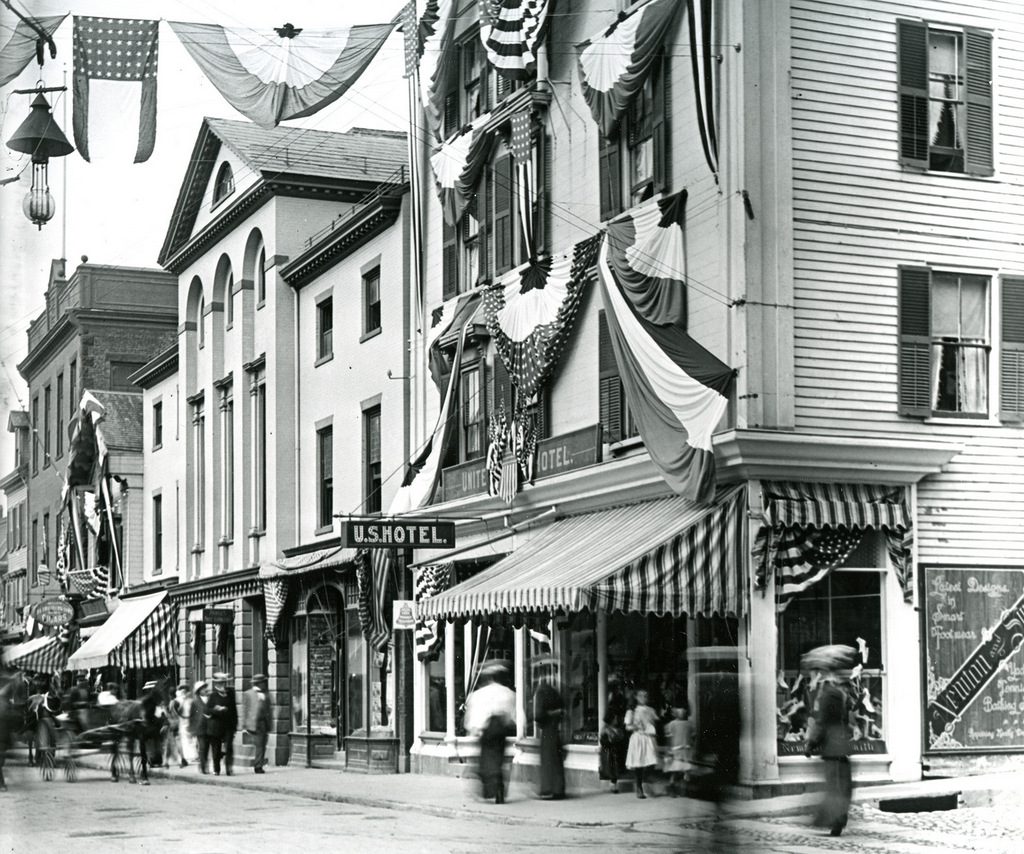 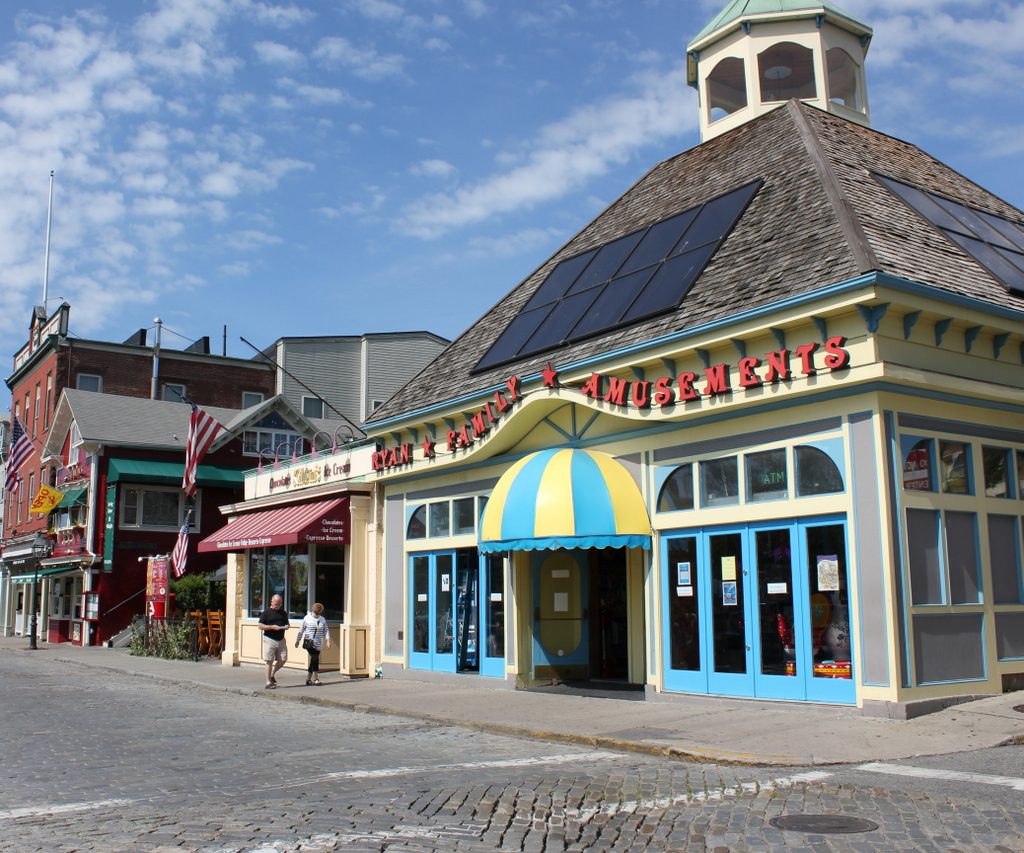 As with an earlier post, the first photo here shows Thames Street decorates in patriotic bunting for the Newport Carnival, which was held in August 1906. The building on the right side, at the corner of Pelham Street, was the United States Hotel, which had been one of the city’s finest hotels when it was built in 1836. Originally owned by the Townsend family, the hotel had replaced the earlier Townsend’s Coffee House, which was built in 1785 and had been a popular gathering place for Newport’s leading citizens in the late 18th and early 19th centuries. The United States Hotel enjoyed similar success in the mid-19th century, and for many years it was the site of the state legislature’s “‘Lection Day” celebrations. Held on the last Tuesday of May, this was the day when the results of the statewide April elections were announced and the winners were inaugurated, and the occasion was a major holiday here in Newport.

By the time the first photo was taken, the ‘Lection Day festivities were a thing of the past, and the state legislature no longer met here in Newport. The United States Hotel has long since been eclipsed by more fashionable Gilded Age hotels, and it had gone through a succession of ownership changes since the Townsend family sold the property in 1858. In 1896, for example, it was being run by George E. Houghton, who declared in a full-page advertisement in the city directory that the hotel had been “thoroughly renovated and refurnished,” and offered “steam heat, electric bells, and table unsurpassed,” and overall it was “the best $2.50 hotel in New England.” When the first photo was taken less than a decade later, though, the hotel was being run by Wulf Petersen, who advertised that it was “lately renovated and under new management,” and was “open the entire year.”

Aside from the United States Hotel, the other historically-significant building in the first photo was the one just beyond it to the left. Built in 1817, this elegant Federal-style building was the home of the Rhode Island Union Bank, which later became the Union National Bank of Newport. The building was designed by Asher Benjamin, a prominent and influential early 19th century architect whose works can be found across New England. However, despite his prolific career, and Newport’s reputation for outstanding architectural works, this bank was Benjamin’s only known commission in the city. Part of this may be due to the fact that the early 19th century was somewhat of a lull in Newport’s prosperity; the city’s shipping industry had never fully recovered after the American Revolution, and its renaissance as a wealthy resort community would not start for several more decades. Consequently, there was limited demand for new buildings, and little need for Asher Benjamin and other architects of his era.

The Union National Bank was still located here when the first photo was taken, and the building was also the home of the People’s Library, which was located on the right side of the building. When the People’s Library – later renamed the Newport Public Library – was established in 1869, the concept of public libraries was still in its infancy in the United States. Members-only libraries, such as Newport’s own Redwood Library, had existed since the 18th century, but it was not until the mid-19th century that public libraries began to take hold, particularly here in the northeast. The library moved into the storefront on the right side in 1870, and would remain here for more than 40 years, until moving out in 1914.

In the years after the first photo was taken, this scene underwent significant changes. The United States Hotel closed in 1918, and remained vacant for many years. Badly deteriorated, it was finally demolished in 1933, leaving only the first floor. This surviving section appears to still be standing, having been incorporated into the present-day commercial building, but all traces of the original hotel building are long gone. In the meantime, bank building to the left was demolished in the 1950s, but like its neighbor it appears part of the first floor survived, and still stands in the present-day scene. However, despite these dramatic changes in the foreground, the two buildings in the distance on the left have survived relatively unchanged, and today they form part of the Newport Historic District, which was designated as a National Historic Landmark in 1968.