The old railroad station on Main Street in Springfield, around 1870-1885. Image courtesy of the Boston Public Library. 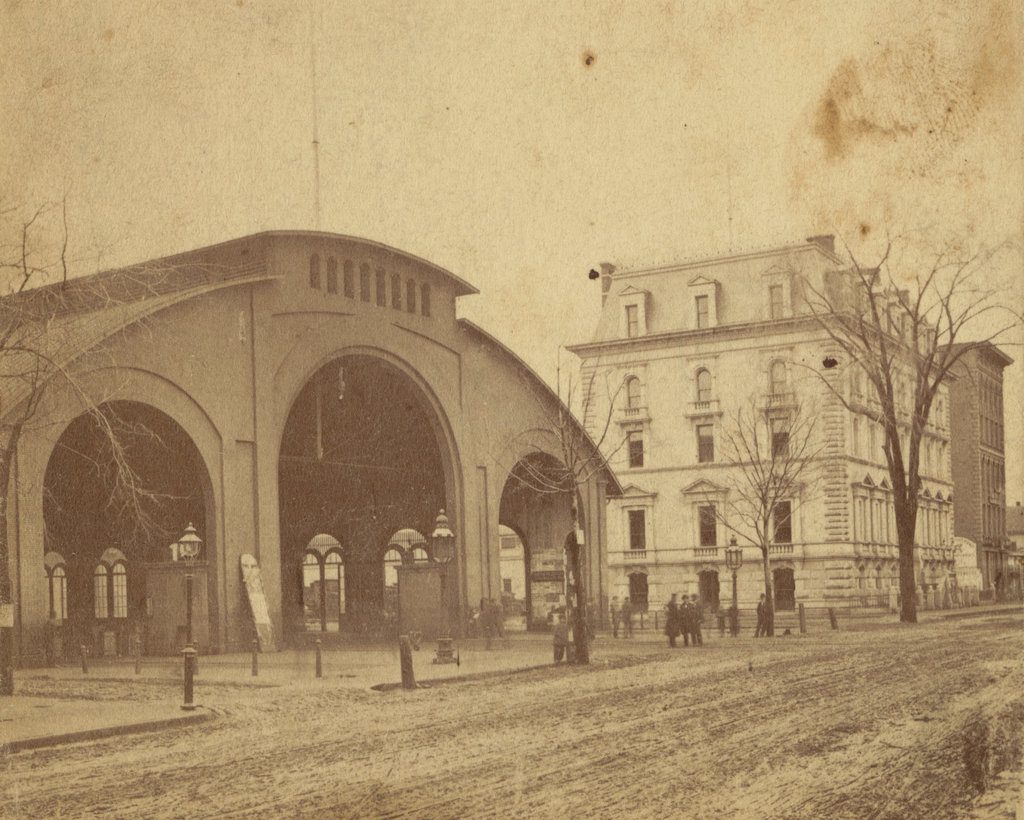 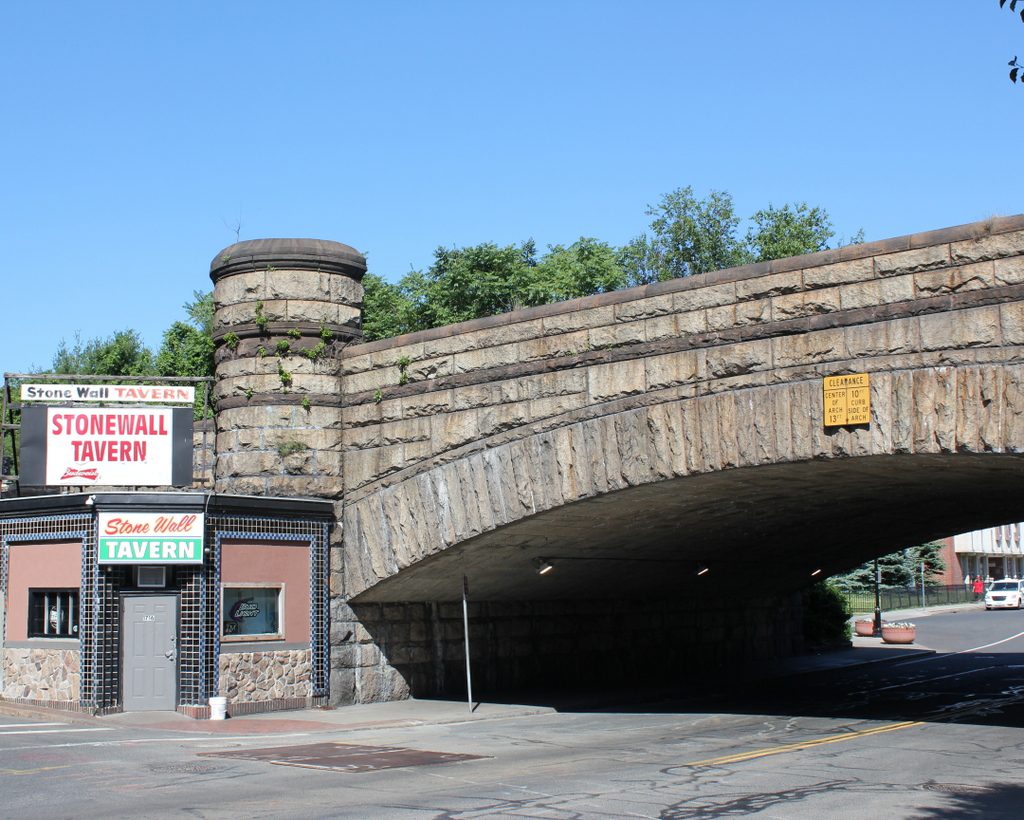 Railroads first came to Springfield in 1839, with the opening of the Western Railroad from Worcester to Springfield, and the line terminated here at a wooden, Egyptian Revival-style railroad station on the west side of Main Street. The railroad was later extended west through the Berkshires, and Springfield became an important midway point on the route between Boston and Albany. The original station stood here for 12 years, but in 1851 it was destroyed in a fire after sparks from a passing locomotive ignited the building.

A new station was soon built on the same site, as seen in the first photo. Like the first station, trains passed directly through the building, although this one was less flammable, having been built with brick and iron. Architecturally, this new station was unremarkable, resembling a large shed rather than a grand union station, but it was designed by railroad engineer George William Whistler, the older brother of the famous painter James Abbott McNeill Whistler. Their father, George Washington Whistler, had briefly lived in Springfield in the early 1840s, and had been the chief engineer of the Western Railroad during the construction of route through the Berkshires.

The new station was joined in the late 1860s by a new office building for the Western Railroad, which was located just north of the station on the right side of the first photo. A striking architectural contrast compared to the plain railroad station, this granite Second Empire-style building was one of the earliest works of Henry H. Richardson, who would go on to become one of the most important architects in American history. Although very different from his later Romanesque Revival buildings, this design reflected his education in France’s École des Beaux Arts, and it helped to establish him as a notable architect.

In 1867, around the same time that Richardson received his commission for the building, the Western Railroad merged with the Boston and Worcester Railroad, forming the Boston and Albany Railroad. Both the station and the office building became part of the new railroad, but by this point it was obvious that the station, less than 20 years old, was already obsolete. As a union station, it served not just the Boston and Albany, but also the Connecticut River Railroad, and the Hartford and New Haven Railroad. Because of this, essentially all rail traffic from the four cardinal directions had to pass through this station, and Springfield’s rapidly growing population was straining the station’s capacity.

Along with overcrowding, the station’s location also caused problems, since the railroad tracks crossed Main Street just to the east of the station, as seen in the first photo. The busy railroad traffic meant that the Main Street crossing gates were closed as often as they were open, with an 1872 observer noting that the gates closed 66 times during one four-hour span from 11 a.m. to 3 p.m. This  caused a significant disruption to the busy pedestrian, carriage, and trolley traffic in downtown Springfield, but the problem persisted for several decades, with neither the city nor the Boston and Albany Railroad wanting to pay the expense of lowering the grade of Main Street or raising the grade of the railroad.

Because of this impasse, the old station remained in use well into the 1880s, since the railroad was unwilling to build a new station until the tracks were raised above street level. It was not until February 1888 that the two sides reached a compromise, with the railroad agreeing to spend $200,000 to raise the tracks and build a stone arch over Main Street, while the city would spend $84,000 to lower Main Street by four feet, and would settle any damage claims by adjacent property owners. Most significantly, though, this project meant the construction of a new railroad station, which would be built across the street from here on the east side of Main Street.

The old railroad station was demolished in the spring of 1889, but the platforms and two waiting rooms were left standing until the new station opened in July. Like the older railroad office building, the new station was based on the designs of Henry H. Richardson, although he died before construction began, and his successors made some significant alterations to his original plans. The entire project was finished once the railroad arch was completed in 1890, finally eliminating the long-problematic grade crossing on Main Street.

Despite all of these changes, the Boston and Albany office building remained standing well into the 20th century, and continued to be used even after the railroad was acquired by the New York Central in 1900. The building was finally demolished in the late 1920s, around the same time as the 1889 railroad station. Despite being less than 40 years old, this station had become obsolete as quickly as its predecessor, and in 1926 it was replaced by the current Union Station on the same site. However, the stone arch is still here, and still serves as an important downtown landmark on Main Street.