The south side of Main Street, just east of the corner of Old South Street in Northampton, probably sometime in the 1860s. Image from Northampton: The Meadow City (1894). 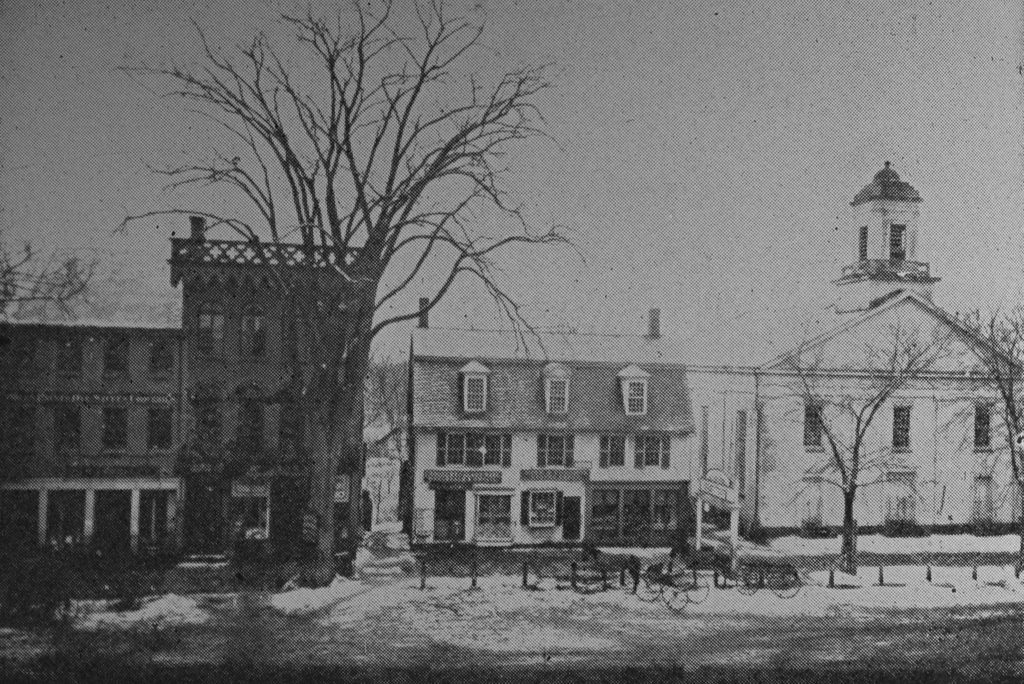 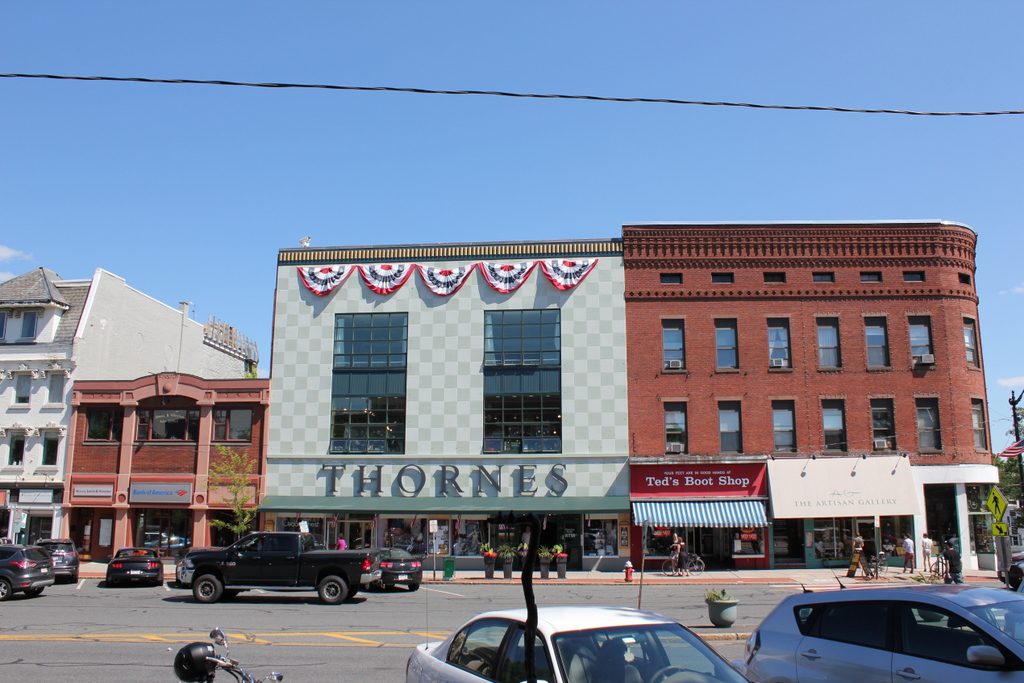 The first photo shows the scene along the south side of Main Street in Northampton, sometime around the 1860s. The four buildings here represent a variety of uses and architectural styles, with two mid-19th century brick commercial blocks on the left, a Georgian-style house in the center, and a Greek Revival-style Edwards Church on the right. The most notable of these buildings was the church, which was built in 1833 at the corner of Main and Old South Streets. Formed as an offshoot of the First Church, it was named in honor of Jonathan Edwards, who had served as pastor of the First Church from 1729 to 1750. The congregation worshipped here in this modest wood-frame church for the next 37 years, until it was destroyed by a fire in 1870.

This same fire also destroyed the adjacent Hunt Building, which was built in 1770 as the home of Dr. Ebenezer Hunt. A 1764 graduate of Harvard, Hunt studied medicine in Springfield under Dr. Charles Pynchon, before returning to his native Northampton in 1768. This house was built two years later, with Georgian-style architecture that was similar the home of his second cousin, John Hunt, that still stands on Elm Street. In 1772, Dr. Hunt married his wife Sarah, and they had eight children, two of whom died in infancy. He lived here for the rest of his life, and during this time he was, in addition to practicing medicine, also active in politics. He served for eight years in the state legislature, in both the House and the Senate, and he was a presidential elector for John Adams in both the 1796 and 1800 elections.

Upon Ebenezer Hunt’s death in 1820, the house was inherited by his son David, who was also a physician. At the time, the property extended as far as Old South Street, but in 1833 David sold the corner lot to the Edwards Church, and the church building was constructed soon after. The house remained in the Hunt family after David’s death in 1837, but by the time the first photo was taken it had been converted to commercial use. The storefront signs are not legible in the first photo, but around the 1860s the ground floor housed three tenants, with a crockery store on the left side, a confectionery and fruit store in the middle, and the dry goods store of Robert J. Fair on the right side. By 1870, Fair’s store occupied the entire ground floor, but on May 19, 1870 he lost nearly his entire stock when both the Hunt Building and the neighboring Edwards Church burned.

After the fire, the Edwards Church constructed a new building a few blocks away at the corner of Main and State Streets, and this site here at the corner of Old South Street was soon rebuilt with new brick commercial blocks. The Columbian Building, located on the right side where he church once stood, was completed in 1871, and two years later McCallum’s Dry Goods opened in a new building on the site of the Hunt house. Both buildings are still standing today, although the latter has undergone significant changes over the years and is now Thornes Marketplace. As for the other two buildings in the first photo, it appears that at least one of them is still standing. The building just to the left of Thornes might be the same one from the first photo, minus its top floor, but if so it has been altered beyond recognition from the exterior. However, the building on the extreme left of the first photo appears to still be there, just with major late 19th century alterations.