The House of the Seven Gables, seen from Turner Street in Salem, around 1890-1901. Image courtesy of the Library of Congress, Detroit Publishing Company Collection. 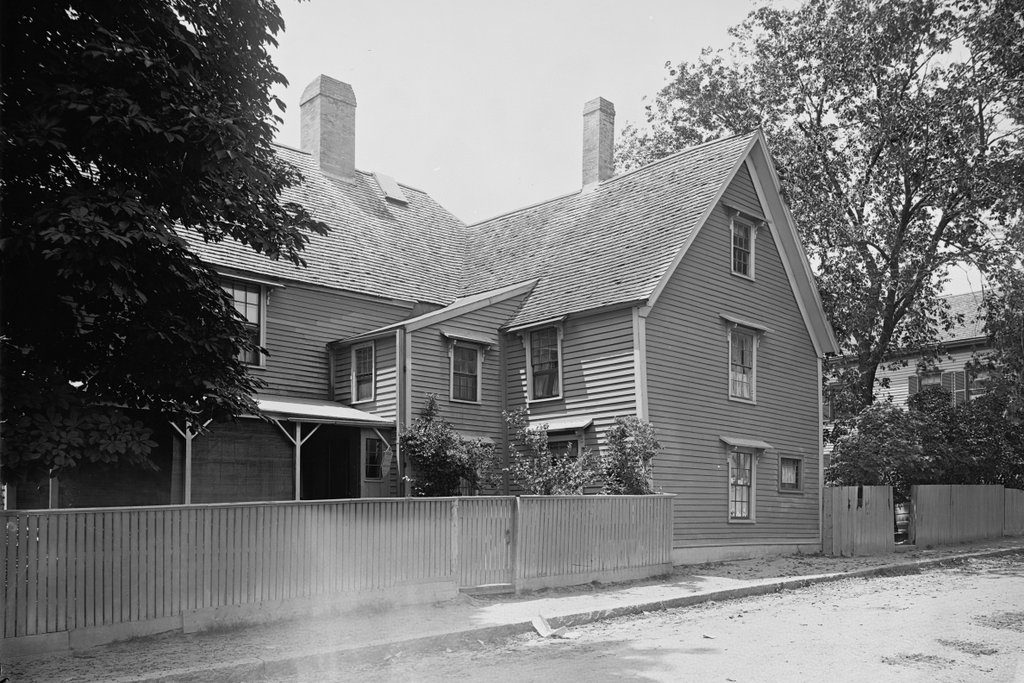 The house around 1910-1920. Image courtesy of the Library of Congress, Detroit Publishing Company Collection. 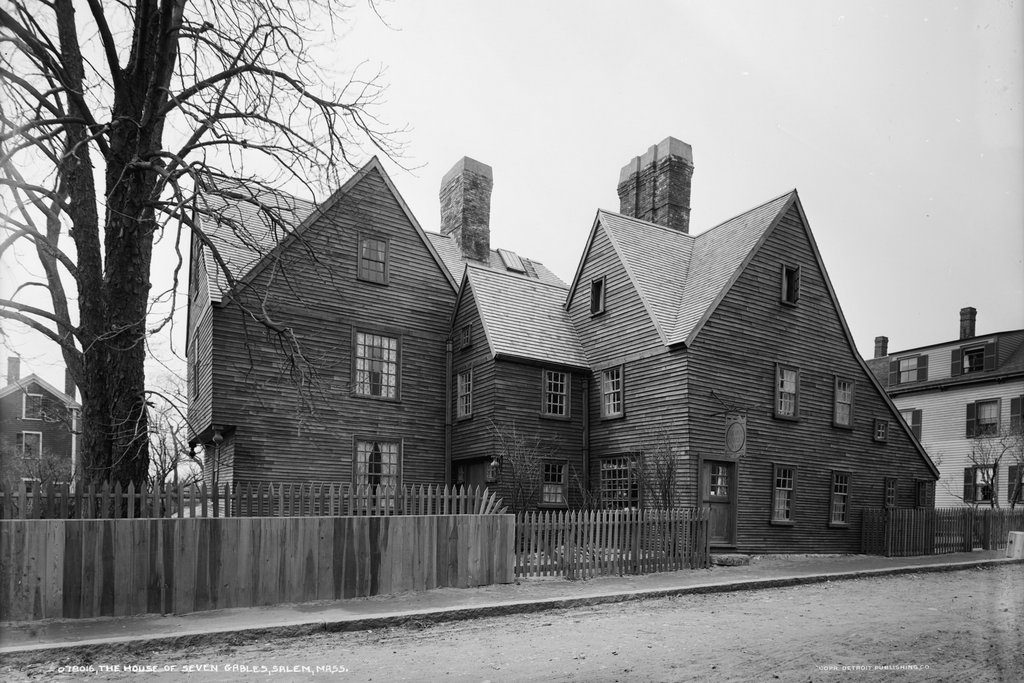 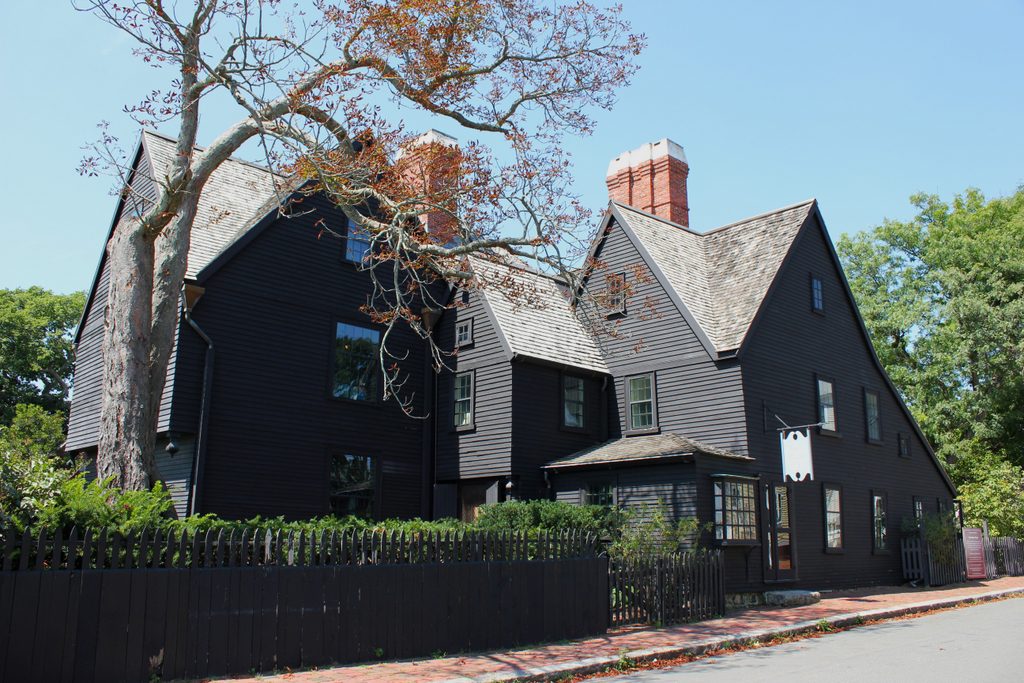 This house is best known for being the inspiration for Nathaniel Hawthorne’s 1851 novel The House of the Seven Gables, but it is also one of the oldest houses in the state, as well as one of the finest surviving 17th century homes in New England. The house has seen considerable changes over the past 350 years, and today the exterior bears little resemblance to the house that Hawthorne would have known, but it was originally built in 1668 as the home of John Turner. At first, the house consisted of just the central portion of the present-day structure. However, like many other colonial-era houses, it steadily expanded over the years, giving the house its distinctive appearance.

Born in Boston in 1644, John Turner moved to Salem as a child, after his father died and his mother remarried to a wealthy Salem merchant. Turner likewise became a merchant as well as a mariner, with a career that coincided with Salem’s rise to prominence as a major seaport. He built the first section of this house around the same time as his marriage to Elizabeth Roberts, but over the years the house was expanded as both the family and Turner’s fortune grew.

The southern part of the house, seen on the left side of the photos, was added in 1677. This wing included a parlor, and increased the size of the house by nearly two thirds. By this point, Turner was among the wealthiest men in Essex County. He owned five ships, with ownership interests in eight others, and had a net worth of nearly 7,000 pounds. However, he died in 1680, when he was only about 36 years old.

Turner’s son, John Turner II, was only about nine years old at the time of his father’s death, but he later inherited the house. He was also a merchant, and eventually accumulated an even larger fortune than his father, with an estate of over 10,000  pounds when he died in 1742. Along with this, he held the rank of colonel in the militia, and served on the Governor’s Council from 1720 to 1740. He made his own changes to the house, including remodeling the interior to reflect the Georgian style of the early 18th century. The house had 14 rooms at the time, and the highly complex roofline featured eight gables, as opposed to the seven that the house is best known for.

As a young man, Turner also played a role in the Salem Witch Trials, which occurred in 1692. He did not make any accusations himself, but one of the accusers, John Proctor’s servant Mary Warren, claimed that the elderly widow Ann Pudeator had bewitched Turner, causing him to fall from a cherry tree. This was one of several accusations made against Pudeator – including a claim that she had turned herself into a bird and flew around her house – and she was subsequently convicted of witchcraft and hanged.

After John Turner’s death in 1742, the house was inherited by his son, John Turner III. However, he evidently did not inherit the business acumen of his father and grandfather, and over the years he squandered the family fortune. Believing the family home was too old-fashioned, he built a modern house near the center of Salem. However, he eventually fell into debt, and in 1782 was forced to sell all of his property, including the House of the Seven Gables, in order to pay off his creditors. He died four years later, leaving an estate of just 59 pounds.

Turner sold this house to Samuel Ingersoll, a ship captain who lived here with his wife Susanna and their children. One of the eight gables had already been removed at this point, and Captain Ingersoll proceeded to remove four more, leaving the house with just the three gables that are shown in the first photo. He lived here for the rest of his life, although he was frequently away on long sea voyages. In 1804, during one of these voyages, both he and his oldest son died of a fever aboard ship. Susanna died seven years later, and the house was inherited by their only surviving child, a daughter who was also named Susanna.

Susanna never married, and went on to live in this house for the rest of her life. She was a second cousin of fellow Salem native Nathaniel Hawthorne, who had been born a short walk from here on Union Street in 1804. The extent to which she and the house served to inspire Hawthorne is still debated, but he did occasionally visit Susanna here, where she told him stories about the house’s history. She also showed him the attic, where there was still visible evidence of the long-removed gables.

Hawthorne never explicitly stated that this house was the basis for The House of the Seven Gables, but it seems likely that he drew inspiration from its history and from Susanna herself. The novel traces the history of the fictitious Pyncheon family, whose founder, Colonel Pyncheon, had acquired the land after the previous owner, Matthew Maule, had been executed for practicing witchcraft. Before his death, though, Maule had placed a curse on the Pyncheon family, and the Colonel died suddenly on the day that the house was completed. In the present day of the novel, the house was owned by one of his descendants, the impoverished Hepzibah Pyncheon. She was an older unmarried woman, likely based on Susanna Ingersoll, and she opened a shop on the ground floor of the old house in order to supplement her income.

The novel was published in 1851, and Susanna continued to live here in the real-life house until her death in 1858. She had no biological heirs, but she left the house to her adopted son, Horace Connolly. He sold it in 1879, and the house changed hands several different times before being purchased by Henry Orlando Upton in 1883. He and his family were living here when the first photo was taken around the end of the 19th century, and by this point the house had become a popular tourist attraction, even though its exterior bore little resemblance to the house described in Hawthorne’s novel.

In 1908, Upton sold the house to Caroline O. Emmerton, a philanthropist who wanted the house returned to its original appearance and preserved as a museum. She hired noted architect Joseph Everett Chandler for the restoration, which lasted from 1909 to 1910. The second photo shows the completed work, which included the reconstruction of the missing gables, as well as a new chimney on the right side that was based on the original 1668 chimney. The exterior was restored to what the house supposedly looked like during the ownership of John Turner II in the 1720s, although some of the changes were made to match Hawthorne’s novel, rather than its actual historic appearance.

Today, the exterior of the house looks essentially the same as it did when Chandler finished his restoration over a century ago. It remains in use as a museum, and has since been joined by several other historic buildings that were moved to the property, including Hawthorne’s birthplace. These buildings now comprise the House of the Seven Gables Historic District, which was designated as a National Historic Landmark district in 2007.