Looking west up Dwight Street from near the corner of Race Street in Holyoke, around 1892. Image from Picturesque Hampden (1892). 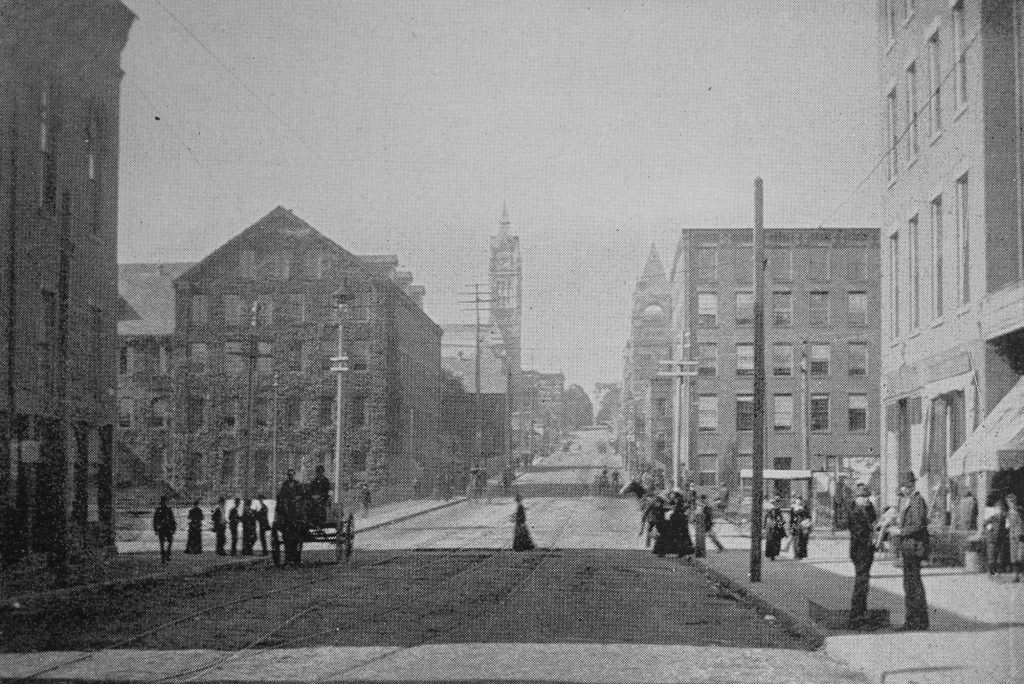 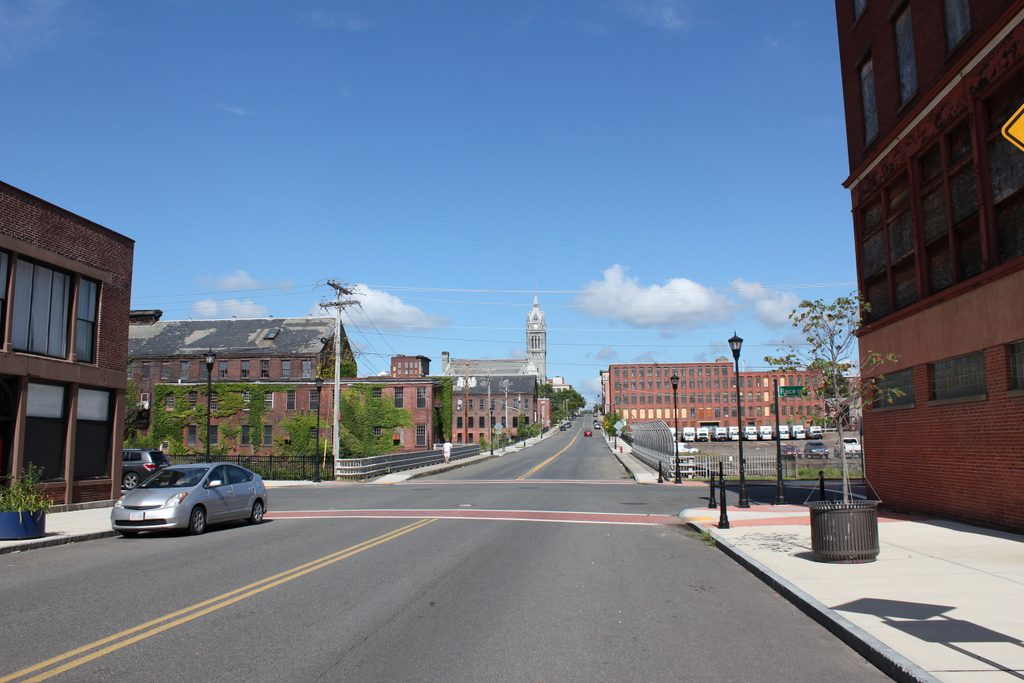 This photo comparison captures some of the effects of the economic decline that Holyoke has experienced in the 125 years since the first photo was taken. The first one shows the city at the height of its prosperity as a major manufacturing center, and several of these factories are seen here, including the Beebe & Holbrook Paper Company just to the left of the middle of the photo, and the Whiting Paper Company across the street on the right side. Both mills were located along the Second Level Canal, which runs parallel to Race Street near the foreground of this scene.

Two of the city’s leading hotels were also located along this section of Dwight Street. In the foreground on the far right side is the corner of the Hotel Hamilton, which was built in the early 1850s as the Holyoke House, but was later expanded over the years. Further in the distance, with its tower visible just beyond the Whiting Paper Company mill on the right side of the street, is the Windsor Hotel. It was built in 1877 at the corner of Front Street, and it was owned by industrialist William Whiting, who also ran the nearby paper mill. Other important buildings in this scene include Parsons Hall on the far left, and Holyoke City Hall in the distance at the top of the hill.

Holyoke would continue to grow and prosper for several more decades after the first photo was taken, with the population peaking at just over 60,000 in 1920. However, this number would steadily decline throughout the 20th century, as factories closed or relocated and residents moved to the surrounding suburbs. Today, Holyoke’s population stands at about 40,000, and most of its industries are gone, along with many of the factory buildings that once lined the city’s canals.

Both Beebe & Holbrook and the Whiting Paper Company have long since gone out of business, and the Whiting mill in the first photo has been demolished. Part of the Beebe & Holbrook building is still standing on the left side, although the five-story section closest to Dwight Street has also been demolished. Closer to the foreground, both Parsons Hall and the Hotel Hamilton are still here, although both have been heavily altered. Each building has lost most of its upper floor, and the Hotel Hamilton is now abandoned.

Further up the hill, the Windsor Hotel was gone soon after the first photo was taken, when it was destroyed in a fire in 1899. It was replaced by a smaller commercial building that has also since been demolished, and today a parking garage stands on the site. Across the street, though, city hall is still there, and its tower is still a prominent landmark in the city skyline. Of all the buildings from the first photo, it is the only one that survives without any significant changes, and it remains in use by the municipal government more than 140 years after it was completed in 1875.