The corner of Main and Elm Streets in Westfield, around 1892. Image from Picturesque Hampden (1892). 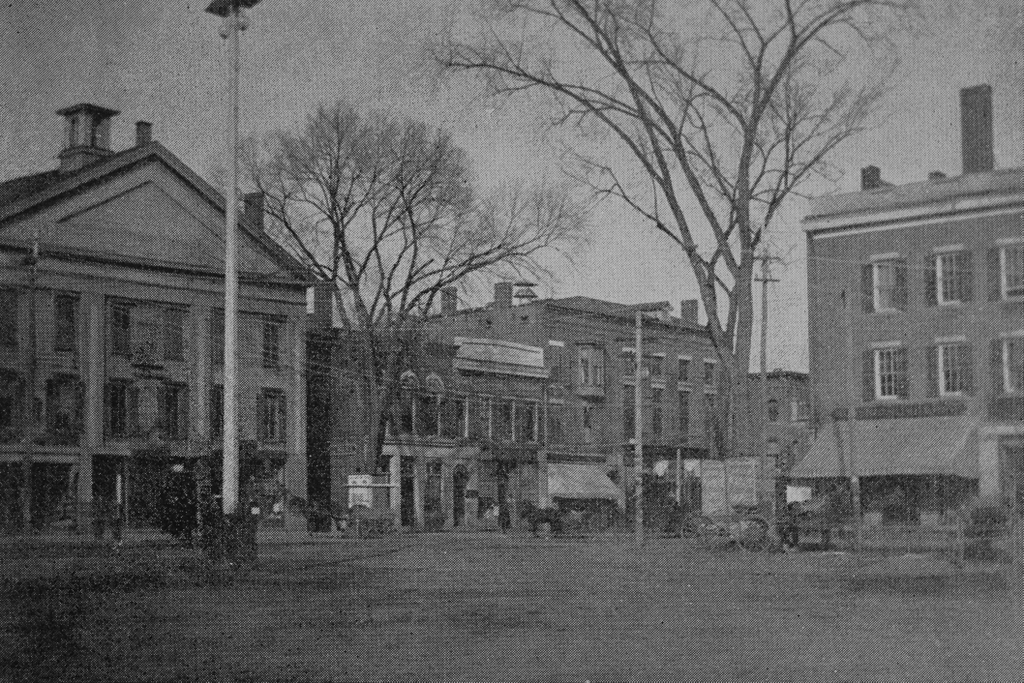 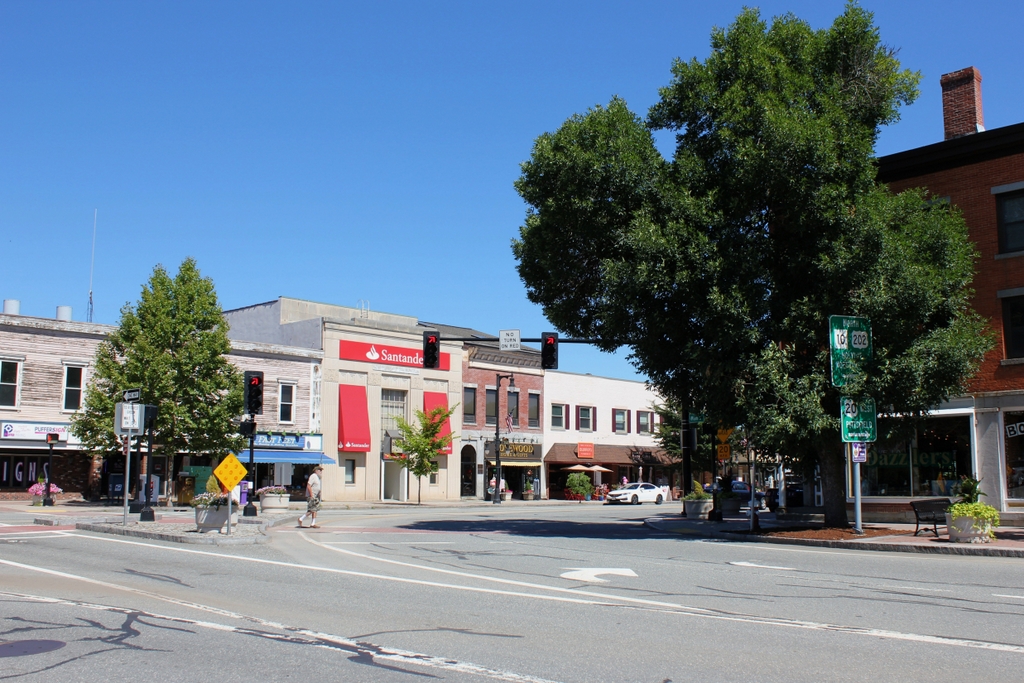 These two photos show the scene at the northwest corner of Park Square, in the center of downtown Westfield. For the most part, these buildings were constructed in the mid-19th century, when Westfield was in the midst of a long, steady growth in its population. The town had a population of 4,180 in 1850, and it would continue to increase throughout the rest of the century, reaching nearly 10,000 by the time the first photo was taken in the early 1890s. By this point, Westfield was a prosperous manufacturing center, and it was particularly well-known for buggy whips, with the town’s firms ultimately controlling about 99% of the world’s production by the early 20th century.

All of the buildings in this scene were constructed as commercial blocks, with the exception of the three-story, wood-frame building on the far left. Located at the corner of Elm and School Streets, this was built in 1843 as the First Methodist Church. The congregation worshiped here in this building for the next 33 years, and during this time the church had several notable pastors. These included Mark Trafton, who served several stints here in the 1840s and early 1850s before being elected to Congress in 1854, and John Hanson Twombly, who served as pastor here from 1851 to 1853. He later went on to become president of the University of Wisconsin from 1871 to 1874, before returning here to this church in 1874. It was also in this building, in 1862, that Russell H. Conwell gave his first lecture. Although he never served as pastor here, he would go on to become a prominent Baptist minister, and the founder and first president of Temple University.

In 1876, during Reverend Twombly’s second pastorate, the church moved into a new, much larger building nearby on Court Street. The old church was then converted exclusively into commercial use. It had been constructed with storefronts on the ground floor, and its tenants included several different grocery stores. However, after the church relocated, the post office moved into this building, and it remained here until 1912, when a purpose-built post office was constructed on the other side of Park Square.

At some point, the original tower and belfry were removed from the building, but otherwise it still retained much of its Greek Revival exterior by the time the first photo was taken. It would remain largely the same until the 1940s, when it was dramatically altered by the removal of the third floor and gable roof. Now down to two stories, the old church is still standing here today on the left side of the photo, although it is barely recognizable from its historical appearance.

To the right of the church in the first photo is a row of three brick commercial buildings. Furthest to the left was the home of the First National Bank of Westfield. This is the only building from the first photo that no longer exists in any form, as it was demolished around 1930 to build the present-day bank on the lot. To the right of it is another two-story building at 32-34 Elm Street, which was built around 1860. For more than a century, it was occupied by Conner’s, a book, stationery, and gift shop that had been founded in 1867. It moved to this location by the mid-1890s, and it would remain here until it finally closed in 2007. Although Conner’s is gone, the building itself still stands, relatively unaltered from its appearance in the first photo.

Further to the right, at the corner of Elm and Church Streets, is Whitman’s Hall, also known as the Music Hall and the Opera House. It was built in 1855, but it was subsequently expanded in 1870 and renovated again in 1888 and 1904. As the names suggest, the three-story building originally included a public hall. This was used for many different kinds of events over the years, including balls, lectures, concerts, operas, and even prize fights. The building is still standing today, but like the old church it has been heavily altered. The third floor was removed around 1940, and the remaining portion of the building is completely unrecognizable from its original appearance.

On the far right side of both photos is the oldest building in the scene, and possibly the best-preserved of all these historic buildings. It was built in 1842 as the Westfield House Hotel, a boarding house that occupied the upper floors until 1894. The ground floor was used for shops and offices, throughout this time, and during the early 20th century the second floor housed the Westfield District Court. Today, the building stands relatively unaltered on the exterior, and it remains an important landmark on the north side of Park Square.

Overall, despite some significant alterations, most of the buildings from the first photo have survived to the present day in some form. Elsewhere in downtown Westfield, there are a number of other historic commercial buildings that are still standing, and the area is now part of the Westfield Center Historic District, which was added to the National Register of Historic Places in 2008 and expanded in 2013. Because of how heavily they were altered, neither the old church nor Whitman’s Hall are considered to be contributing properties, but both the Conner’s building and the Westfield House Hotel are listed as such, as is the 1930 First National Bank of Westfield building.