The Wayside, at 455 Lexington Road in Concord, around 1890-1901. Image courtesy of the Library of Congress, Detroit Publishing Company Collection. 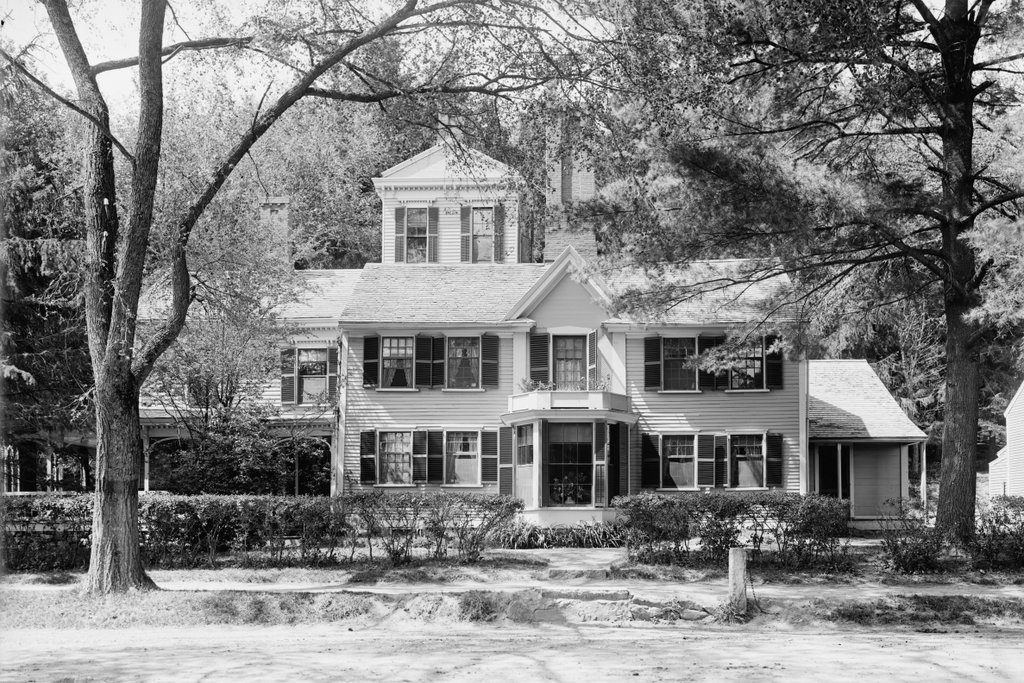 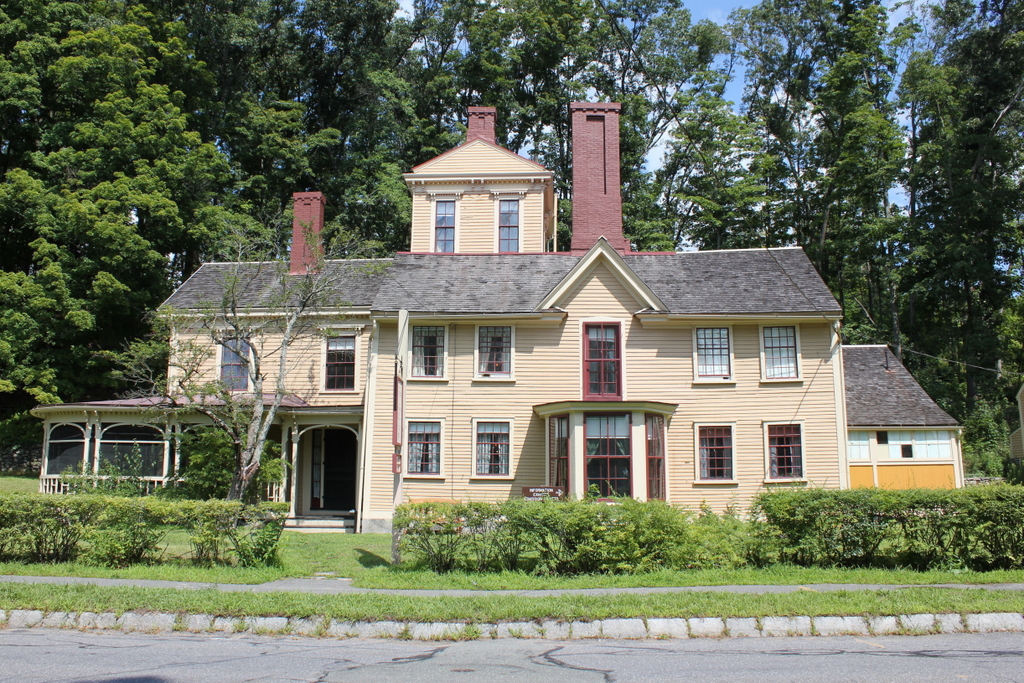 This house is best known for having been the home of three different notable authors during the 19th century, although the house itself is actually much older than that. It has been heavily altered over the years, but it dates back to at least 1717, when owner Caleb Ball sold the property to glazier Samuel Fletcher. It changed hands several more times during the first half of the 18th century, and during this time its owners included housewright Nathaniel Coleburn, who lived here from 1723 to 1730 and 1740 to 1747, and cordwainer John Breed, who lived here from 1747 to 1769.

In 1769, Breed sold the property to Samuel Whitney. He was involved in the Patriot cause in the years leading up to to  the American Revolution, including serving as a delegate to the Massachusetts Provincial Congress, which met in Concord in October 1774. He was also the muster master for the Concord minutemen, and in early 1775 he stored a cache of ammunition here on the property. The British redcoats, who had come to Concord to seize colonial military supplies on April 19, marched right past the house both before and after the Battle of Concord, although they evidently did not search Whitney’s house or outbuildings.

The Massachusetts colonial government was not the only institution that ended up in Concord because of the Revolution. From 1775 to 1776, the Continental Army laid siege to British-occupied Boston, and many of the soldiers were stationed in Cambridge. Around 1,600 were housed at Harvard, requiring the college to relocate to Concord during the 1775-1776 school year. Here in Concord, classes were held in the meetinghouse, the courthouse, and a schoolhouse, and students and faculty boarded at various locations throughout the town. This house became the residence of John Winthrop, a noted scientist who held the Hollis Chair of Mathematics and Natural Philosophy at Harvard from 1737 to 1779.

In 1778, Samuel Whitney sold the house to Daniel Taylor, who in turn told it to Daniel Hoar two months later. He was a farmer, and he lived here for the rest of his life, until his death in 1814. His son, Daniel Hoar Jr., then inherited the property, which remained in the Hoar family until 1827. The house subsequently went through several more owners, and in 1845 it became the home of Amos Bronson Alcott, his wife Abigail, and their four daughters: Anna, Louisa, Elizabeth, and Abigail.

Bronson Alcott, as he was generally known, was a noted writer and philosopher who was associated with the Transcendentalist movement. A few years before moving here, he had been the founder of Fruitlands, a short-lived utopian commune in the town of Harvard, Massachusetts. This effort ultimately failed after just seven months, in part because of poor agricultural practices and strict dietary rules that prohibited all animal products and even some vegetables. The Alcotts subsequently relocated to Concord in 1844, where they lived with a friend for a short time before moving into this house.

Although Bronson Alcott was a noted figure in his own right, his fame was eclipsed by that of his second daughter, Louisa May Alcott. She was 12 years old when the family moved here, and they lived here for a little over three years before moving to Boston in 1848. However, despite her relatively short stay here, these were formative years for Louisa, and many of her experiences here were later incorporated into her best-known work, Little Women, a largely autobiographical novel that was published in 1868 and 1869.

In the three years that they lived here, the Alcotts made a number of changes to the property. Bronson did extensive landscaping work, in particular the creation of terraces on the hillside behind the house. He planted these with a variety of flowers and trees, and he grew fruits, vegetables, and grains here in order to accommodate his vegan diet. The family also made changes to the house itself, which they named Hillside. This work included the addition of two new bedrooms for Louisa and her older sister Anna. During this time, the family was also involved in the Underground Railroad, and they are believed to have sheltered at least a few runaway slaves here in the house.

In 1848, the Alcotts moved to Boston, although they would eventually return to Concord in 1857. A year later they purchased Orchard House, located immediately to the west of this house on Lexington Road. It would remain in the family for more than 25 years, and Louisa lived there for most of her literary career. In the meantime, though, their former home here was sold to another prominent author, Nathaniel Hawthorne. He had previously lived in various places throughout his adult life, including several years in Concord at the Old Manse, but this was the only house that he ever owned.

Hawthorne moved into this house in 1852, along with his wife Sophia and their three children, Una, Julian, and Rose, whose ages ranged from one to eight. When he had left Concord in 1845, Hawthorne was still a relatively unknown author who struggled to make ends meet. He subsequently lived in Salem, where he worked as surveyor at the Custom House for several years, before moving to Lenox in the Berkshires. However, by the time he returned to Concord to live here in this house, he was a well-established author, thanks to the recent publications of The Scarlet Letter (1850), The House of the Seven Gables (1851), and The Blithedale Romance (1852).

Also in 1852, Hawthorne published a campaign biography of Franklin Pierce. The two men had been friends since their time at Bowdoin College, and Hawthorne helped Pierce’s presidential campaign by lending him both his name and literary talents to write the biography. It was evidently successful, because Pierce won the election and was inaugurated in 1853. Pierce then rewarded his friend by appointing him as the United States consul in Liverpool, a prestigious diplomatic post that Hawthorne held for the next four years until the end of Pierce’s presidency.

As a result of this appointment, the Hawthornes only lived here for a little over a year before moving overseas, and they would not return here until 1860, after an extended tour of Europe. Hawthorne would continue to reside here for the last four years of his life, until his death in 1864 in Plymouth, New Hampshire, while on a trip through the White Mountains with ex-President Pierce. His widow Sophia remained here in Concord until 1868, when she and her children moved to England. She ultimately sold the house in 1870, a year before her own death.

Although Hawthorne lived in this house for a relatively short period of time, he made some substantial alterations to the house. Upon returning from Europe, he added a third-story tower to the rear of the house, which became his study. Other changes included the addition of a bedroom above the wing on the left side, and a bay window where the front door had originally been. During his ownership, he also changed the name of the house, from Hillside to The Wayside.

In the 1870s, after Sophia Hawthorne sold the property, it was owned by Mary C. Pratt, who operated the Wayside School for Young Ladies out of the house. Her neighbor Bronson Alcott, who was still alive and approaching 80, was a frequent visitor here during this time. He often lectured at the school, and he also gave tours of the grounds, telling stories to visitors about Nathaniel Hawthorne.

The school ultimately closed in 1879, and that same year the house returned to Nathaniel Hawthorne’s family when it was purchased by his daughter Rose and her husband, George P. Lathrop. They resided here intermittently for the next four years, and during one of their absences Rose’s brother Julian lived here with his family. George was the editor of the Boston Courier newspaper, and he also wrote several novels, although his works never received the same attention as those of his famous father-in-law. Rose would later go on to have success in a completely different field. After George’s death in 1898, she founded a Catholic religious order, the Dominican Sisters of Hawthorne, and became Mother Mary Alphonsa.

In 1883, the Lathrops sold the house to Boston publisher Daniel Lothrop and his wife Harriett. As with so many of the previous residents of this house, Harriet was an accomplished writer. She was best known for The Five Little Peppers, a children’s book series that was published by her husband’s company starting in 1881, under the pen name Margaret Sidney. She eventually took over the operation of the publishing company after Daniel’s death in 1892, and she continued writing children’s books into the 1910s.

The Lothrops had one child, Margaret, who was born here at The Wayside in 1884. Both George and Harriett were interested in literature and historic preservation, and they recognized the historical significance of their house. Margaret grew up with a similar appreciation, and she eventually inherited the property after her mother’s death in 1924. At the time, she was an economics professor at Stanford University, but she arranged to have the house preserved and open to the public for tours starting in 1928. She eventually returned to Concord in 1932, residing here at The Wayside while also organizing the tours of the house during the summer months.

Margaret’s goal was to sell the house to an organization that would preserve it for the future. She even wrote a book, The Wayside: Home of Authors, about the history of the house. It was published in 1940, and she hoped that it would generate interest in the property, but no prospective buyers came forward. She ultimately lived here for the next 25 years after writing the book, and she continued to give tours and conduct research throughout this time.

In 1963, she successfully lobbied for the house to be declared a National Historic Landmark, the highest level of federal recognition for a historic site. Two years later, she finally found a buyer in the National Park Service, and in 1965 the house became part of the recently-established Minute Man National Historical Park. The house has remained a part of the park ever since, and it is still open to the public, nearly a century after Margaret Lothrop first opened her house for tours.

The first photo in this post was taken sometime around the 1890s, during George and Harriett Lothrop’s ownership. Thanks in large part to their daughter’s efforts, the exterior has remained well-preserved since then. The shutters are gone, and there have been some changes to the wing on the right side, but otherwise the house hardly looks any different from this view.

Overall, the only other significant difference between the two photos is the front lawn, which was once shaded by two large trees that probably dated back to Hawthorne’s time. Both the elm on the left and the pine tree on the right are long gone, perhaps as a result of the 1938 hurricane or, in the case of the elm, to Dutch Elm Disease. However, there is at least one tree still standing from the first photo. On the left side of the house, in front of the porch, is a hawthorn tree that was, appropriately enough, planted by Nathaniel Hawthorne during his residence here. Despite its unassuming size, it is now more than 150 years old, and it survives today as a living reminder of the home’s famous occupant.