The railroad station on Depot Street in Bellows Falls, around the late 1800s. Image courtesy of the Rockingham Free Public Library. 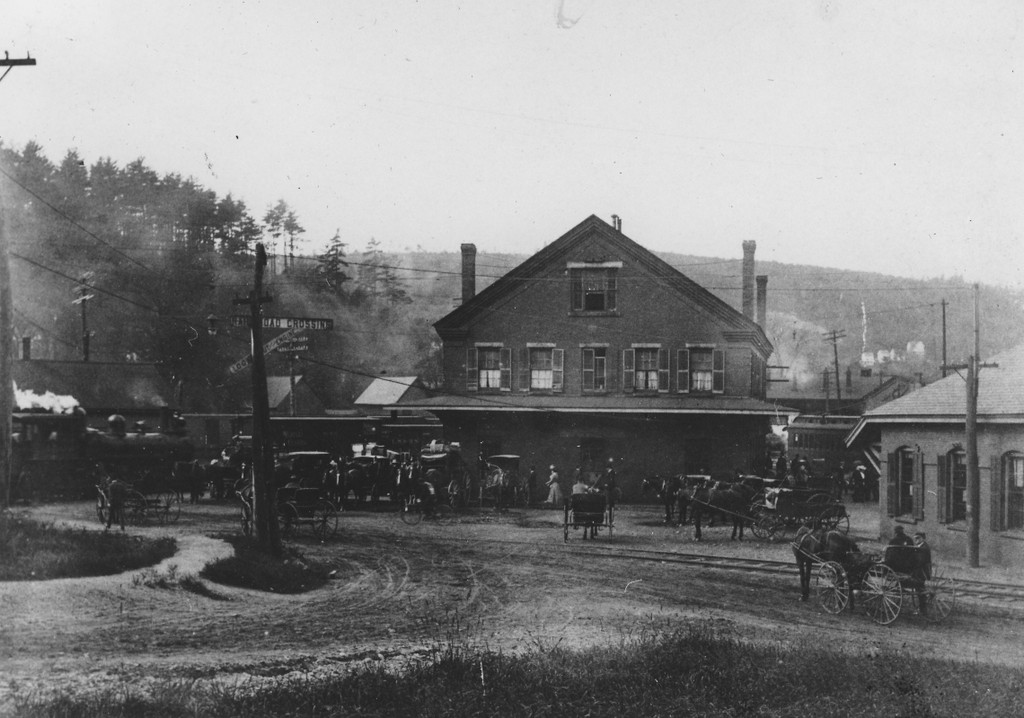 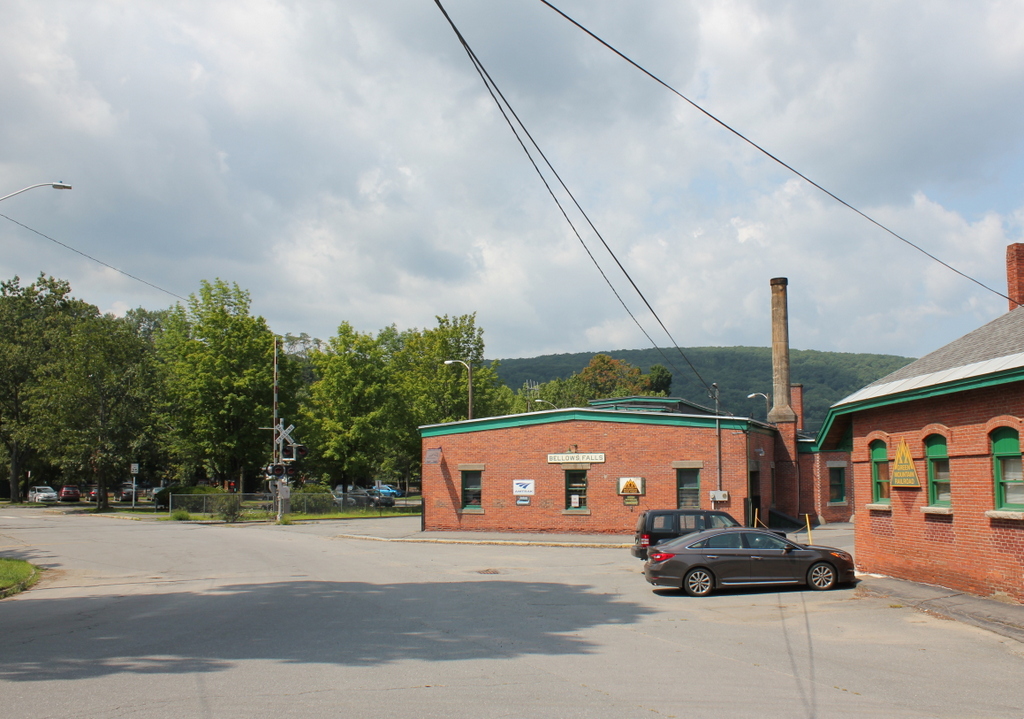 The village of Bellows Falls, which is located within the town of Rockingham, developed into an important transportation crossroads during the late 18th century. Here, the Connecticut River drops 52 feet as it passes through a narrow gorge. This was an impediment to river navigation, requiring a canal here to bypass the falls, but the width of the gorge also made it an idea spot for a bridge. For most of the 18th century, there were no bridges over the Connecticut River at any point along its 400-mile course, but the first opened here at Bellows Falls in 1785. This made it easier to travel between Vermont and New Hampshire, and it was an important link on the trade routes from Boston to Montreal.

With the development of railroads during the first half of the 19th century, Bellows Falls became the junction of several different railroads. The first to arrive were the Sullivan County Railroad and the Cheshire Railroad, which opened in 1849. At the time, though, there was no railroad bridge across the river, so passengers bound for Bellows Falls had to disembark across the river in Walpole, New Hampshire and cross the covered bridge on foot. Later in 1849, the Rutland and Burlington Railroad was opened to Bellows Falls, followed in 1851 by the Vermont Valley Railroad.

The first railroad station here in Bellows Falls was built on this site, on a triangular plot of land just south of where the four railroads converge. The railroads formed an “X” here, with the Vermont Valley Railroad heading southwest, on the far left side of the scene; the Cheshire Railroad heading southeast, on the far right side; the Sullivan County Railroad to the northeast; and the Rutland and Burlington Railroad to the northwest. This original station was used for a few years, but around 1852 it was replaced by a more substantial brick building, which is shown here in the center of the first photo.

Over the years, these various small railroads were eventually consolidated into much larger ones through a series of mergers and leases. By the 1870s, all but the Cheshire Railroad were controlled by the Central Vermont Railroad, although the Central Vermont subsequently leased the Sullivan County and Vermont Valley to the Boston & Maine Railroad by the early 1880s, and ended its own lease on the Rutland Railroad in 1896. Then, in 1900, the Boston & Maine acquired the Cheshire, which gave them control over most of the rail traffic in Bellows Falls. However, the Central Vermont retained trackage rights through Bellows Falls, and continued to operate trains here.

At some point around the turn of the 20th century, the railroad station was evidently remodeled, as period postcards show it with a very different roof than the one in the first photo. However, the old station remained in use until 1921, when it was destroyed by a fire on a cold December night. The fire started in the restaurant kitchen, and within a half hour the building was gone, thanks in part to the interior wood paneling that helped to fuel the flames. In addition, the responding firefighters had to contend with sub-zero temperatures and 60-mile-per-hour winds. One of the nearby hydrants was completely frozen, and by the time they were able to get water flowing from another hydrant it was of little use; there was no saving the station at that point, and, in any case, the strong winds only blew the water back toward the firefighters.

The present-day railroad station was completed on the same site in 1923, although it is a much more modest building than its predecessor, with only one story topped by a very low roof. It continued to be used by passengers throughout the next few decades, but inter-city rail travel saw a steep decline across the country after World War II. With more travelers preferring automobiles or airplanes, railroads steadily shrank their passenger service. The last privately-run passenger train that stopped here in Bellows Falls was the Montrealer, which ceased in 1966. However, the service was subsequently revived after Amtrak was created, and the Montrealer returned to Bellows Falls again in 1972.

Today, nearly a century after this building opened, it remains in use as a railroad station, although there is far less passenger traffic than there had been here in the 1920s. The Montrealer was eventually replaced by Amtrak’s Vermonter, which runs one northbound and one southbound train each day between St. Albans, Vermont and Washington, D.C. These two daily trains are the extent of passenger rail service in Bellows Falls today, but the historic station still stands here as reminder of the village’s railroad legacy. Another historic building here is the Railway Express Agency building, on the far right side of the scene. Built around 1880, it is the only surviving building from the first photo, and both it and the railroad station are now part of the Bellows Falls Downtown Historic District, which was added to the National Register of Historic Places in 1982.