The view looking north on Middle Street towards Russell Street in Hadley, around 1900. Image from History of Hadley (1905). 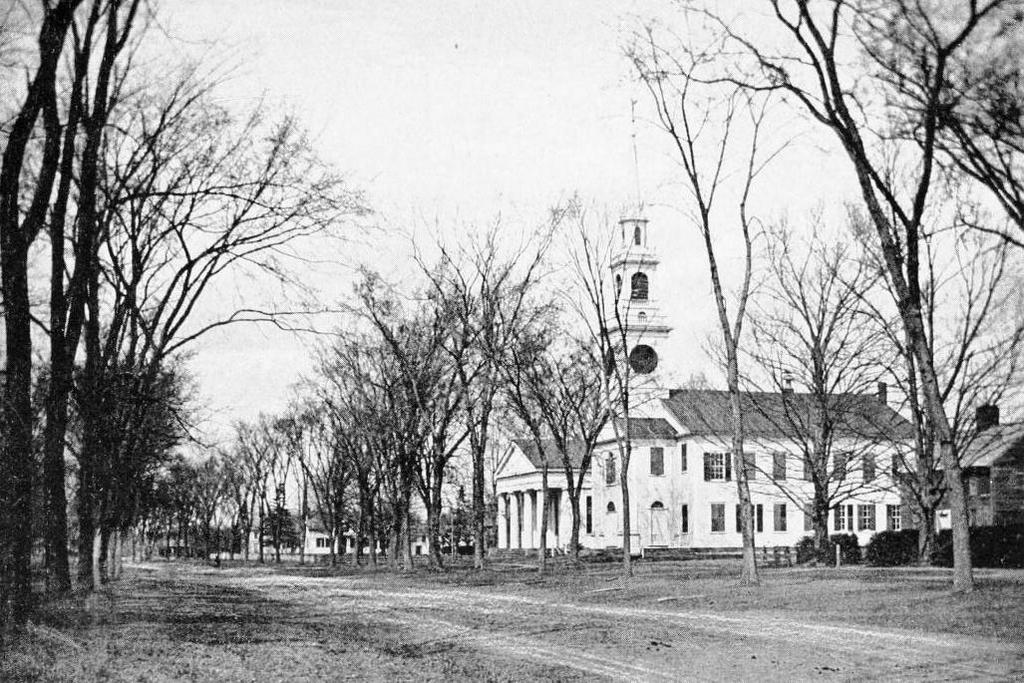 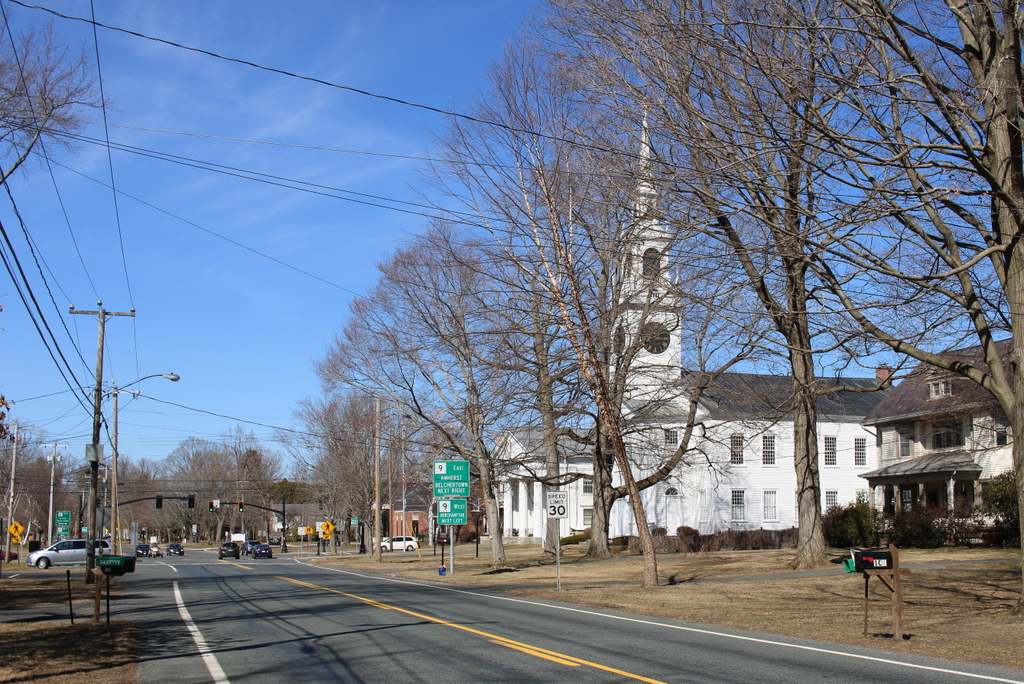 Hadley is one of the oldest towns in western Massachusetts, having been first settled by European colonists in 1659 and incorporated as a town two years later. Its terrain is mostly flat, and it is situated on the inside of a broad curve in the Connecticut River, giving it some of the finest farmland in New England. The main settlement developed in this vicinity, with a broad town common on what is now West Street. This common was the town center during the colonial period, and it was the site of three successive meetinghouses beginning in 1670.

The third meetinghouse, which is shown here in these photos, was completed on the town common in 1808. This location was a matter of serious contention, as by the turn of the 19th century much of the town’s development had shifted east toward what is now Middle Street. Tradition ultimately prevailed, and the third meetinghouse was built on the common. However, this proved to be only temporary, because in 1841 it was relocated. The intended location was to be a compromise, located halfway between the common and Middle Street, but the movers ignored this and brought the building all the way to Middle Street, to its current location just south of Route 9.

Architecturally, this meetinghouse reflects some of the changes that were occurring in New England church designs. Prior to the late 18th century, the region’s churches tended to be plain in appearance. Many did not have steeples, and those steeples that did exist tended to rise from the ground level on the side of the building, rather than being fully incorporated into the main section of the church. This began to change with prominent architects like Charles Bulfinch, who drew inspiration from classical architecture when designing churches and other buildings. Bulfinch’s churches tended to feature a triangular pediment above the main entrance, with a steeple that rose from above the pediment, rather than from the ground.

Bulfinch does not appear to have played a hand in designing Hadley’s church, but its builder was clearly influenced by his works. It has a pediment with a steeple above it, and it also has a fanlight above the front door, and a Palladian window on the second floor. Other classically-inspired decorative elements include pilasters flanking the front entrance and dentils around the pediment. As for the steeple itself, it does not bear strong resemblance to the ones that Bulfinch designed, but the builder likely took inspiration from other 18th century New England churches. In particular, it bears a strong resemblance the steeples of churches such as Old North Church in Boston and the First Church of Christ in Wethersfield, Connecticut.

Aside from moving the church to this site, the other major event of 1841 that solidified Middle Street as the town center was the construction of a town hall here. Prior to this point, town meetings were held in the church, as was the case in most Massachusetts towns in the 18th and early 19th centuries. Massachusetts was slow to create a separation between church and state, and not until 1833 did the state outlaw the practice of taxing residents to support local churches. Here in Hadley, this soon led to a physical separation between the church and the town government, although as shown in this scene the two buildings stood side-by-side on Middle Street.

While the church features Bulfinch-inspired architecture, the design of the town hall reflects the Greek Revival style of the mid-19th century. This style was particularly popular for government and other institutional buildings of the period, as it reflected the democratic ideals of ancient Greece. The town hall is perhaps Hadley’s finest example of this style, with a large portico supported by four Doric columns, along with Doric pilasters in between the window bays on all four sides of the building.

The first photo shows Middle Street around the turn of the 20th century, looking north toward the church, the town hall, and Russell Street further in the distance. The photo also shows a house on the foreground, just to the right of the church. Based on its architecture, this house likely dated back to about the mid-18th century, but it was gone by 1903, when the current house was built on the site. This house was originally the home of Dr. Frank Smith, and it was designed by Springfield architect Guy Kirkham.

Today, the town of Hadley is significantly larger than it was when the first photo was taken more than 120 years ago. Russell Street is now Route 9, a major east-west thoroughfare that has significant commercial development thanks to Hadley’s position at the center of the Five Colleges region. Likewise, Middle Street is far from the dirt road in the first photo, and it is now Route 47. However, much of Hadley has retained its historic appearance, including its extensive farmland and its many historic buildings. Here on Middle Street, both the church and the town hall are still standing. They have seen few major exterior changes during this time, and the church is still an active congregation, while the town hall remains the seat of Hadley’s town government. Both buildings are now part of the Hadley Center Historic District, which was added to the National Register of Historic Places in 1977.