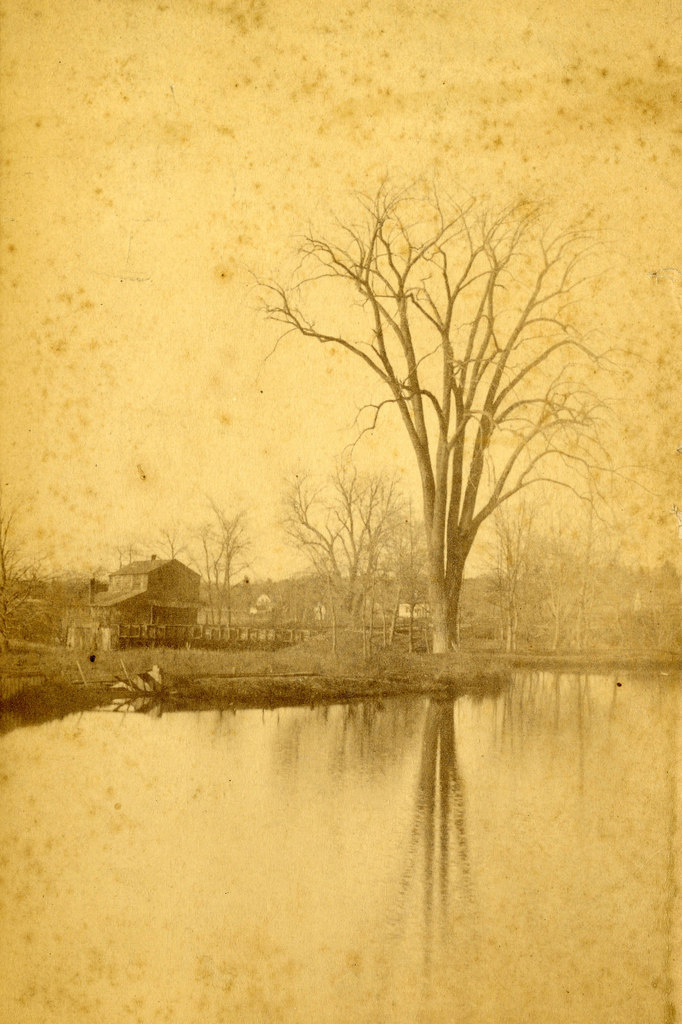 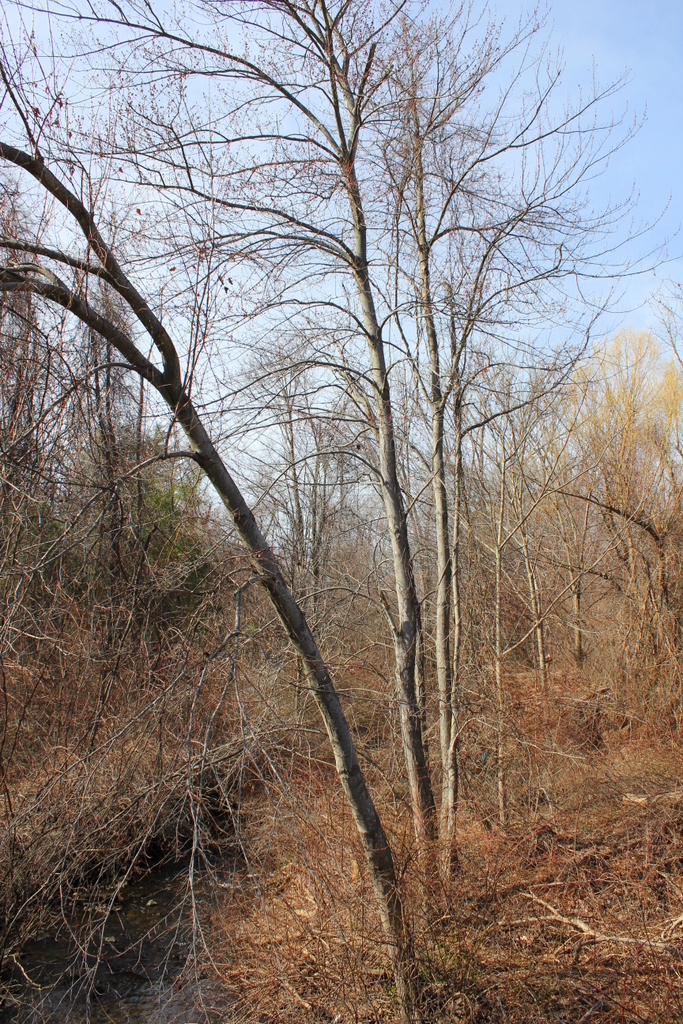 The town of East Longmeadow was never much of an industrial center, in part because it lacked major rivers to power factories.  The Pecousic Brook, seen here, is the only stream of any significance near the town center, and while it wasn’t suitable for large-scale industry, it did power several small mills, including the Bodurtha Saw Mill.  The mill was built in 1820 as a grist mill, where local farmers had corn, wheat, and oats ground into flour.  Later on, it was used as a sawmill, with several owners including Henry Bodurtha, for whom it is named.  It burned in 1906, and today there doesn’t seem to be any evidence of either the mill or the reservoir that was once here. 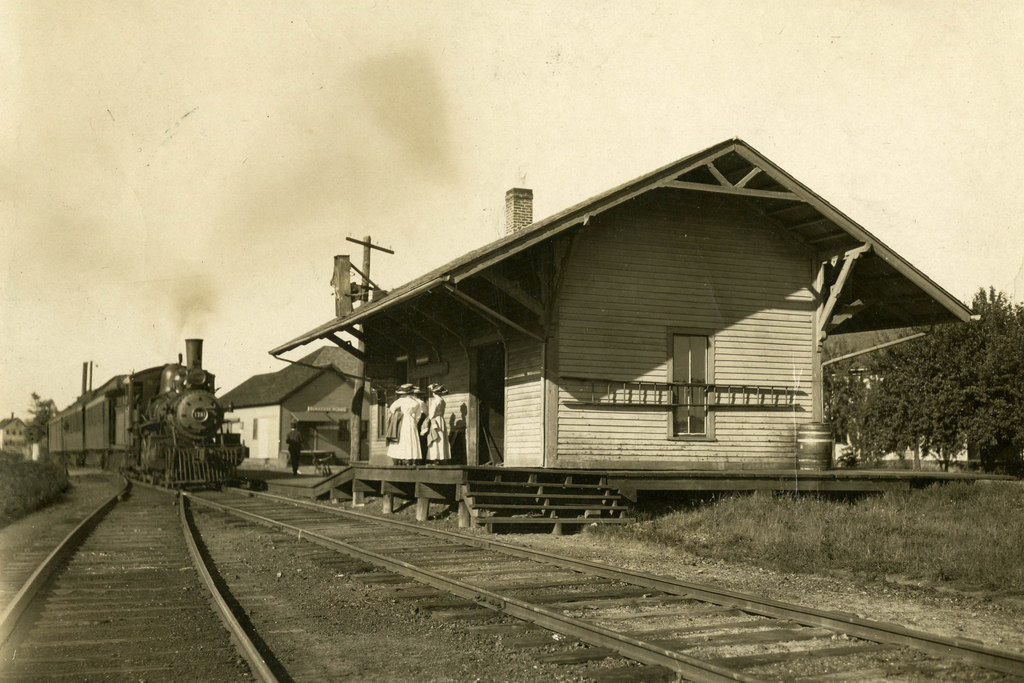 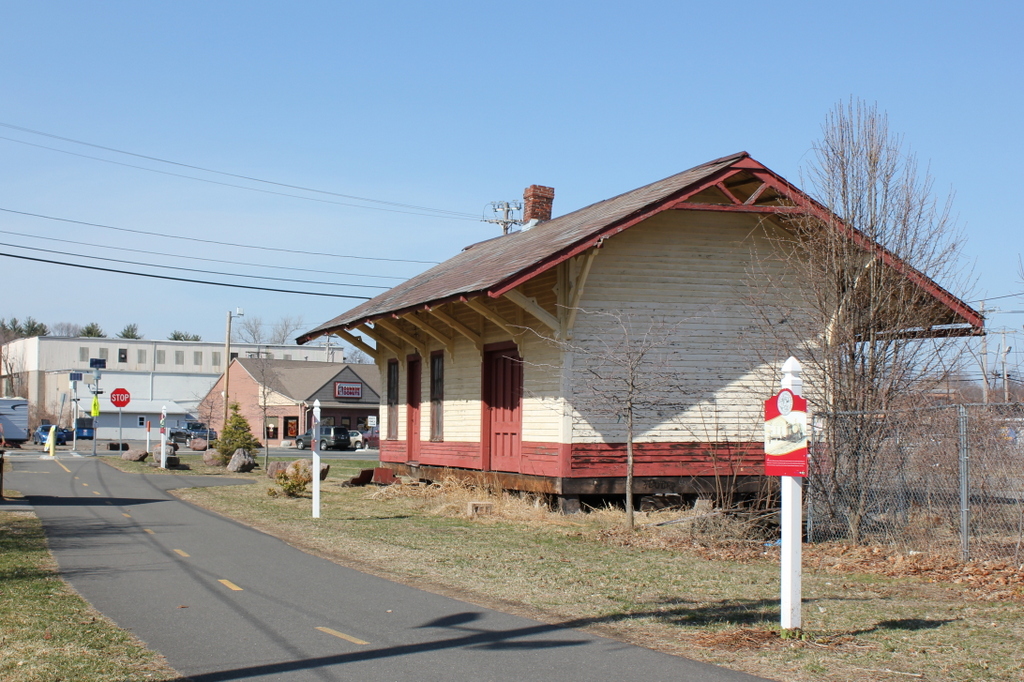 Today, East Longmeadow doesn’t have any active rail lines, but a century ago the Armory Branch of the New York, New Haven & Hartford Railroad passed through the town.  The line connected East Hatford and Springfield, and passed by the Watershops of the Springfield Armory, which gave the branch its name.  In East Longmeadow, it provided a way for the many quarries in town to ship their stone, and it also provided a method of transportation in the days before automobiles.  However, the branch was never a major route, and was abandoned by the 1980s.  Today, most of the line is still abandoned, but a 1.6 mile section in East Longmeadow is now the Redstone Rail Trail, named for the quarries that once used the line.  The station is located at the northern terminus of the trail, and although it has clearly seen better days, it is still instantly recognizable from the 1910 photo.

Another view in downtown East Longmeadow, looking up present-day Route 83 from the rotary, around 1900-1910.  Image courtesy of the Library of Congress, Detroit Publishing Company Collection. 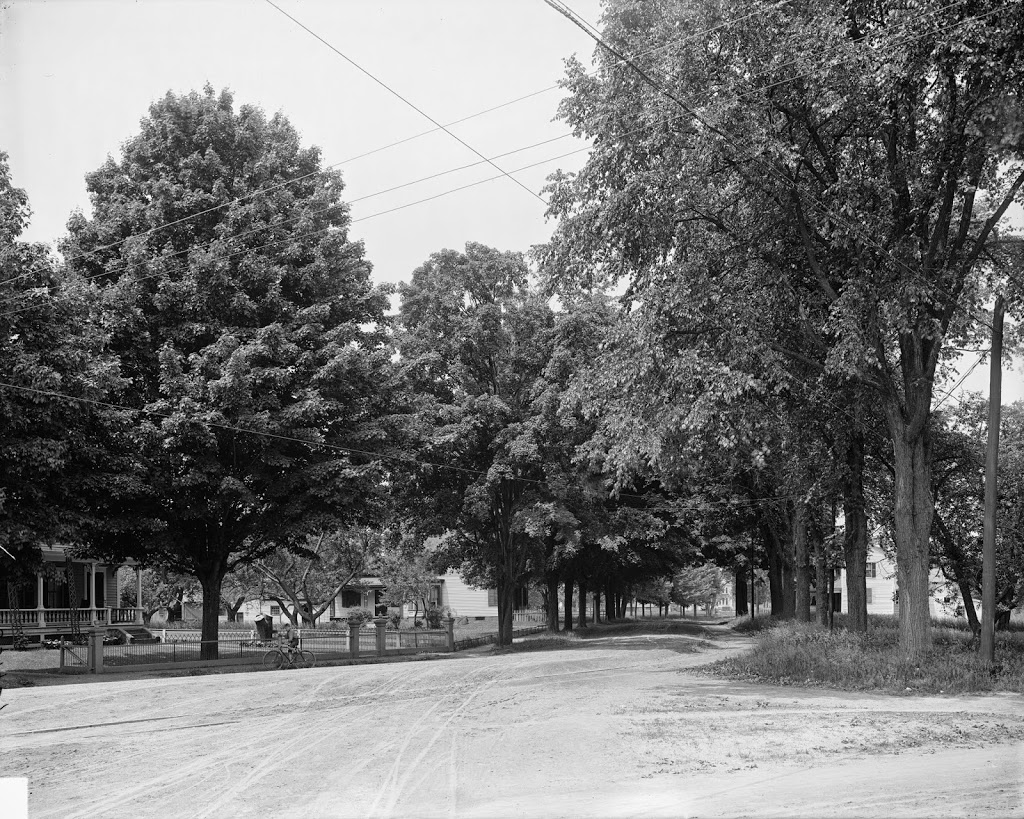 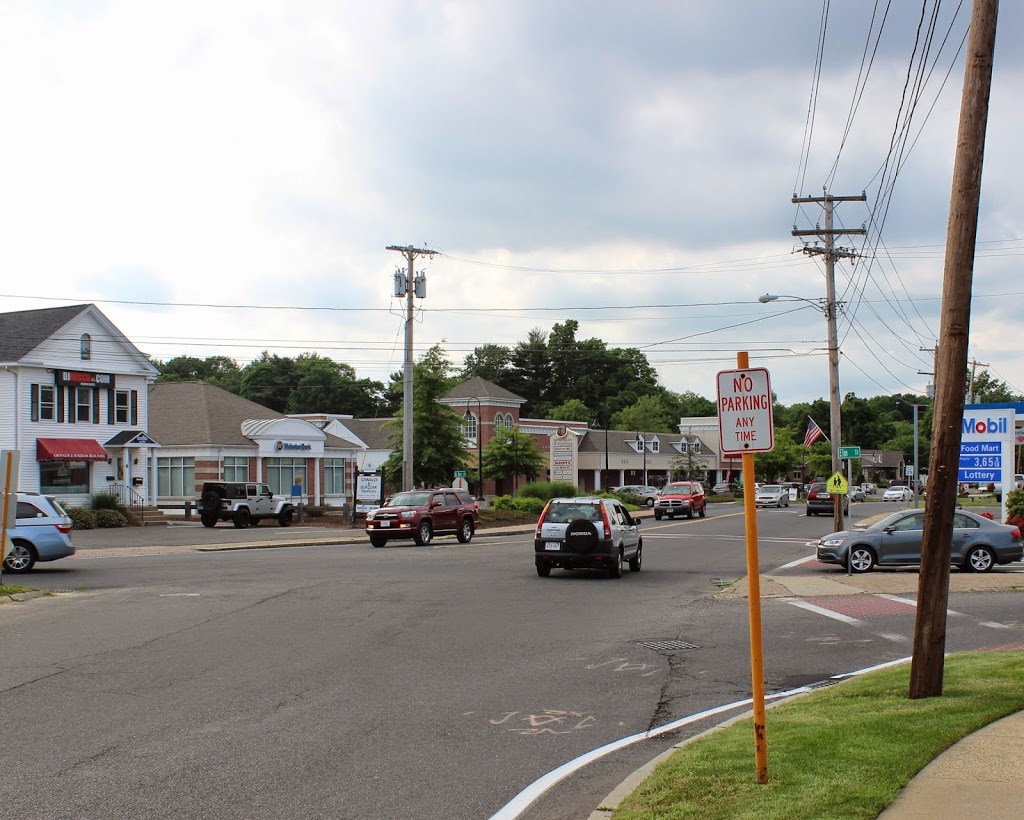 This view shows the scene looking north on North Main Street in East Longmeadow, toward Springfield, from the rotary.  The house on the far left appears to be the same in both photos, but otherwise everything else has changed, showing the increase in commercial development in the center of East Longmeadow over the past century.  Another change seen here is the trolley tracks, which are visible in the lower left of the first photo.  As mentioned in this post, streetcars once connected Springfield and its surrounding towns, much in the same way that PVTA buses now do.

The view looking up modern-day Route 83 in East Longmeadow at the rotary, between 1900 and 1910.  Image courtesy of the Library of Congress, Detroit Publishing Company Collection. 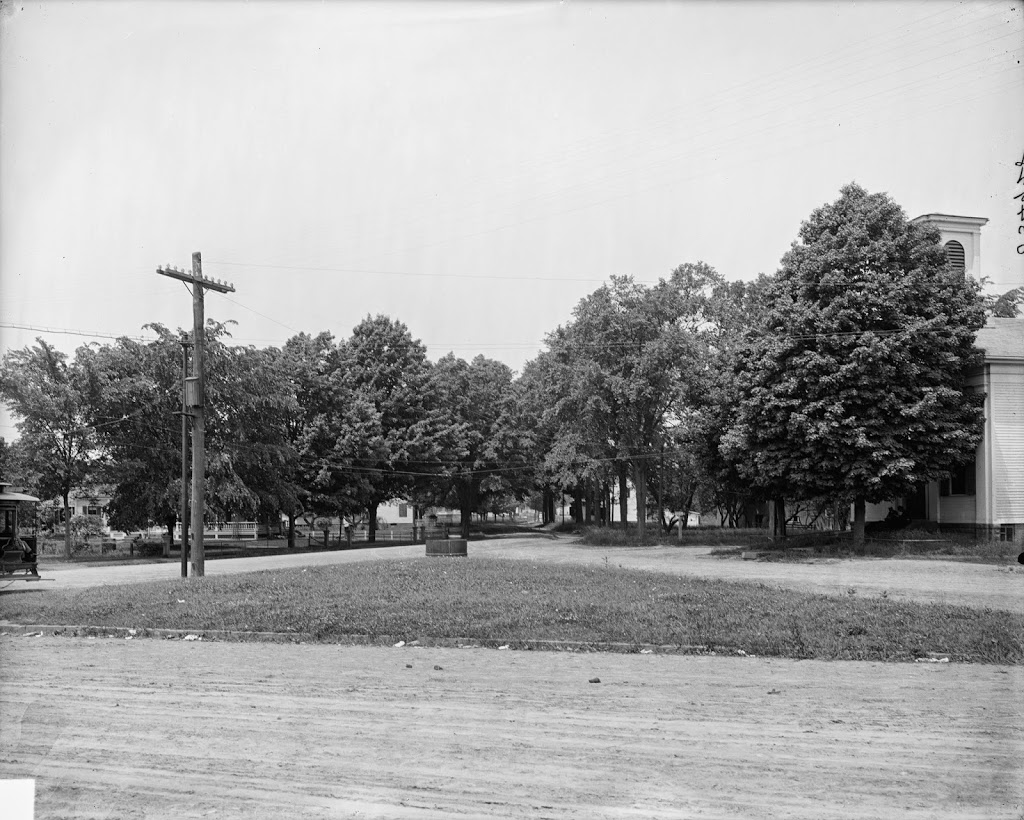 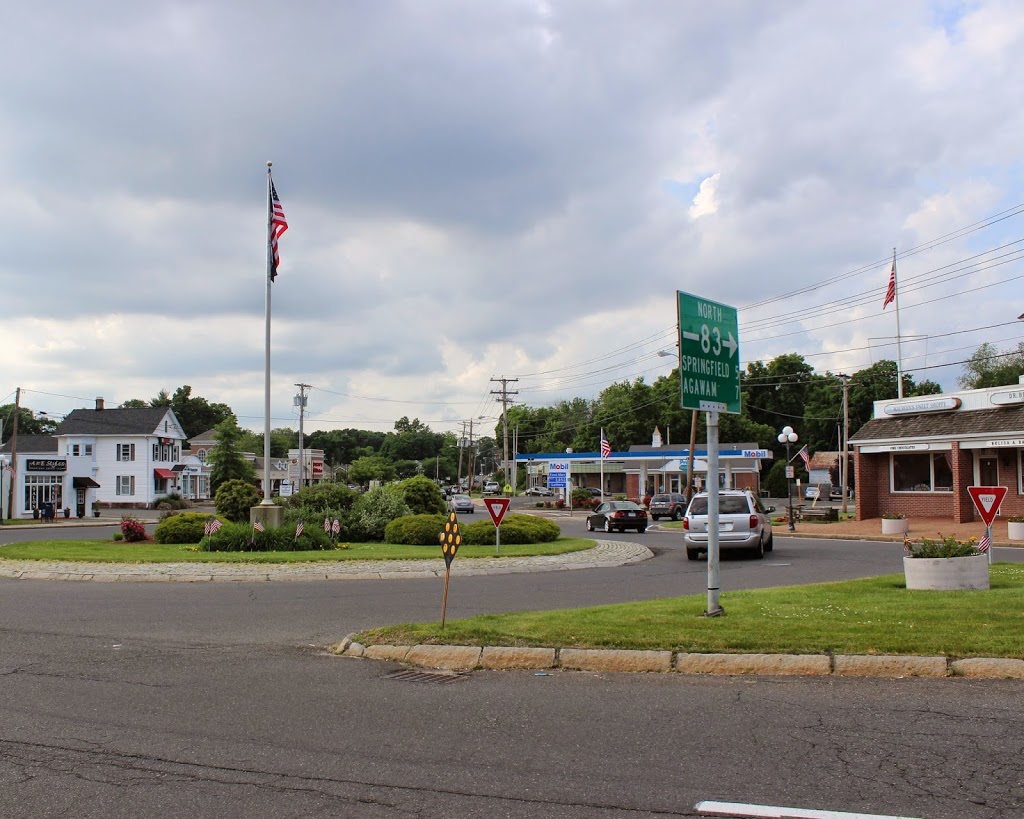 Reportedly, the rotary in the center of East Longmeadow holds the record for most roads in a single intersection.  I don’t know whether this is actually the case, but either way its seven roads make it an unusual and confusing intersection.  It contains a rotary-like feature, but unlike conventional rotaries, the traffic in the rotary doesn’t necessarily have the right of way – sometimes rotary traffic does, sometimes incoming traffic has to yield, and sometimes incoming traffic has to stop.  One thing it does lack, though, is a traffic light.  Although I can only imagine what a traffic light with seven different streets would be like.

A century ago, the intersection still had seven roads, but with far less traffic, and at much lower speeds.  However, it did have one thing that modern-day drivers don’t have to contend with – trolleys.  Part of one trolley is barely visible on the far left of the first photo.  This location on the rotary, directly in front of town hall, was the southern end of one of the many streetcar lines that linked the towns in the Connecticut Valley at the turn of the century.