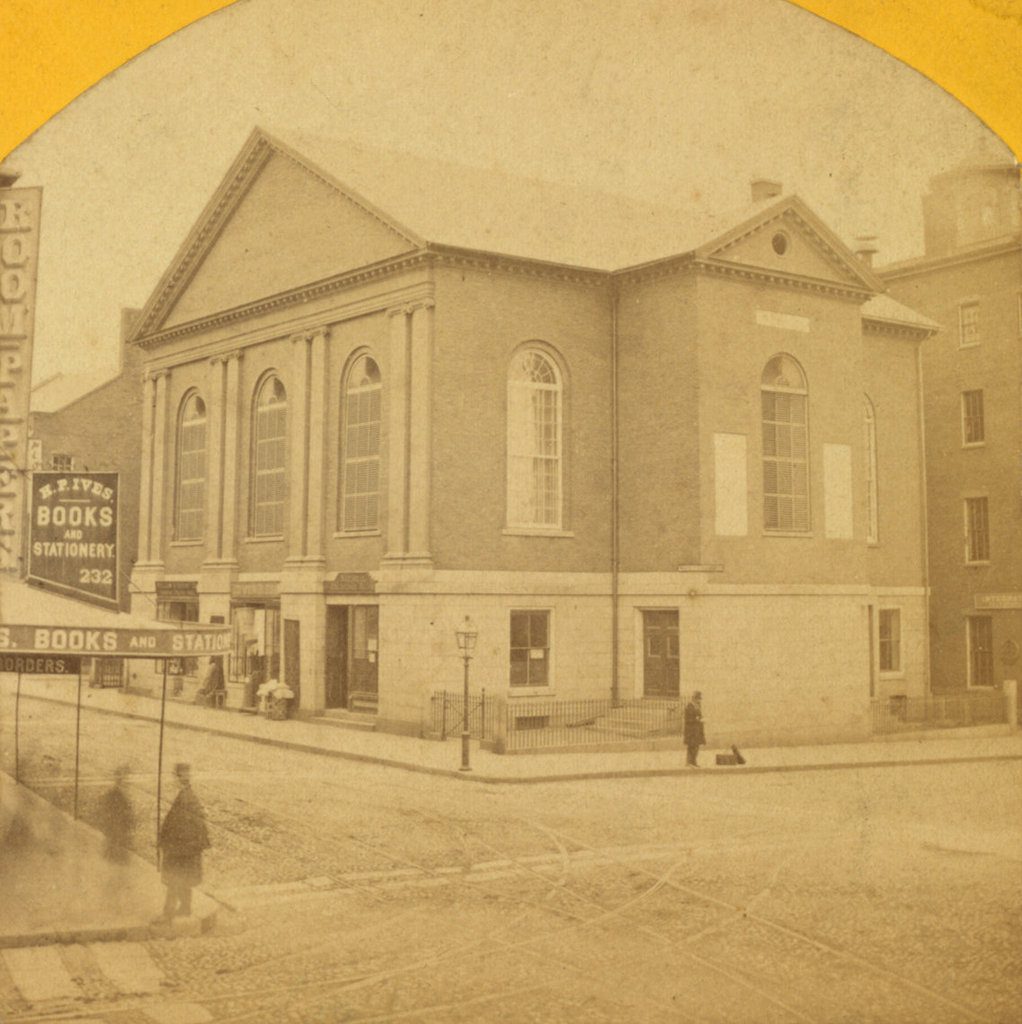 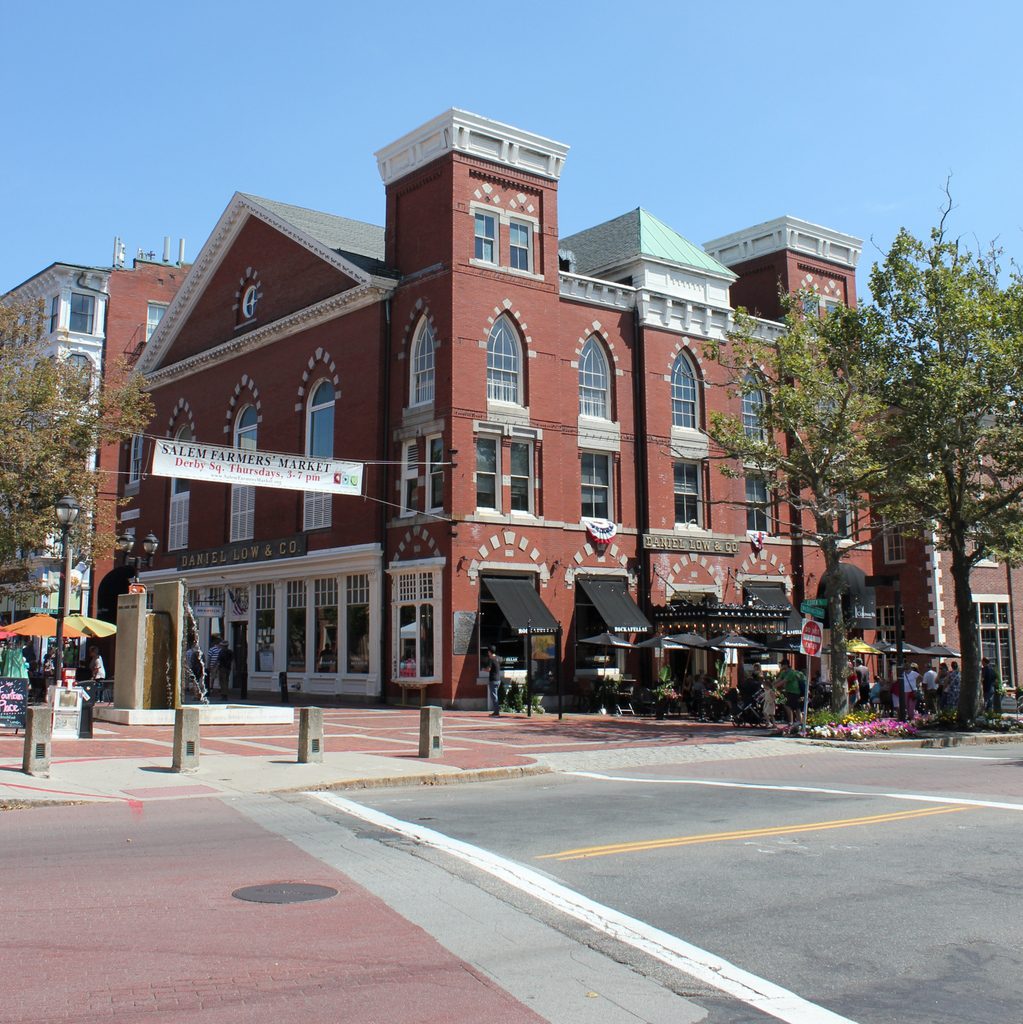 Looking east on Essex Street from the corner of Washington Street in Salem, around 1910-1920. Image courtesy of the Library of Congress, Detroit Publishing Company Collection. 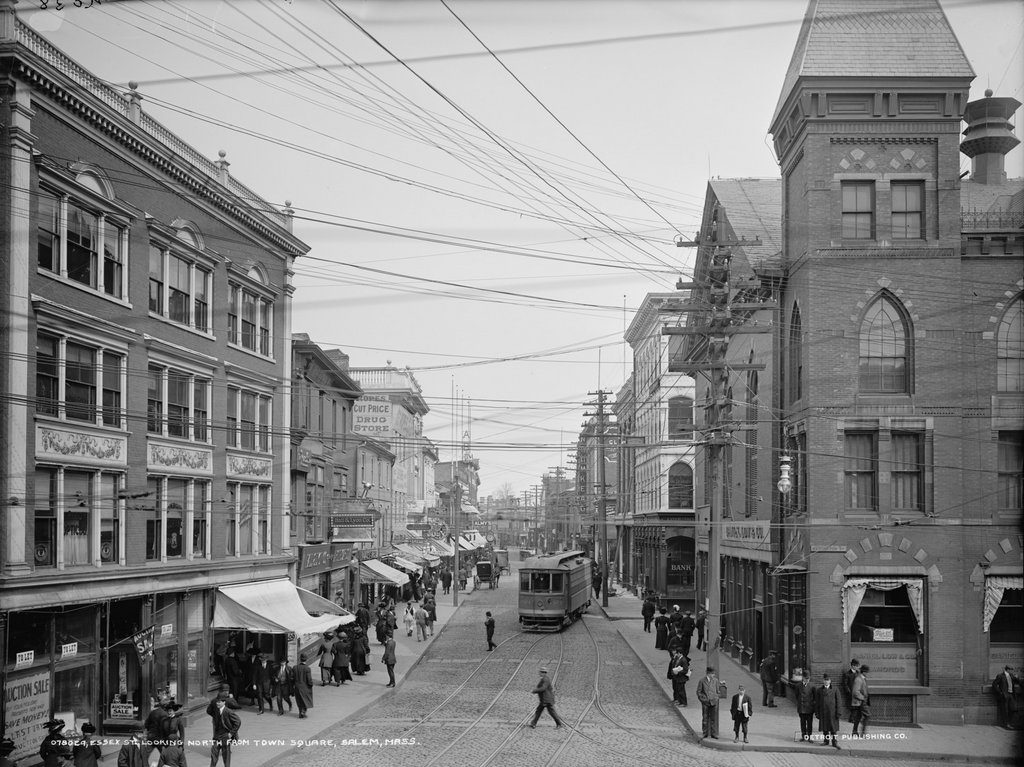 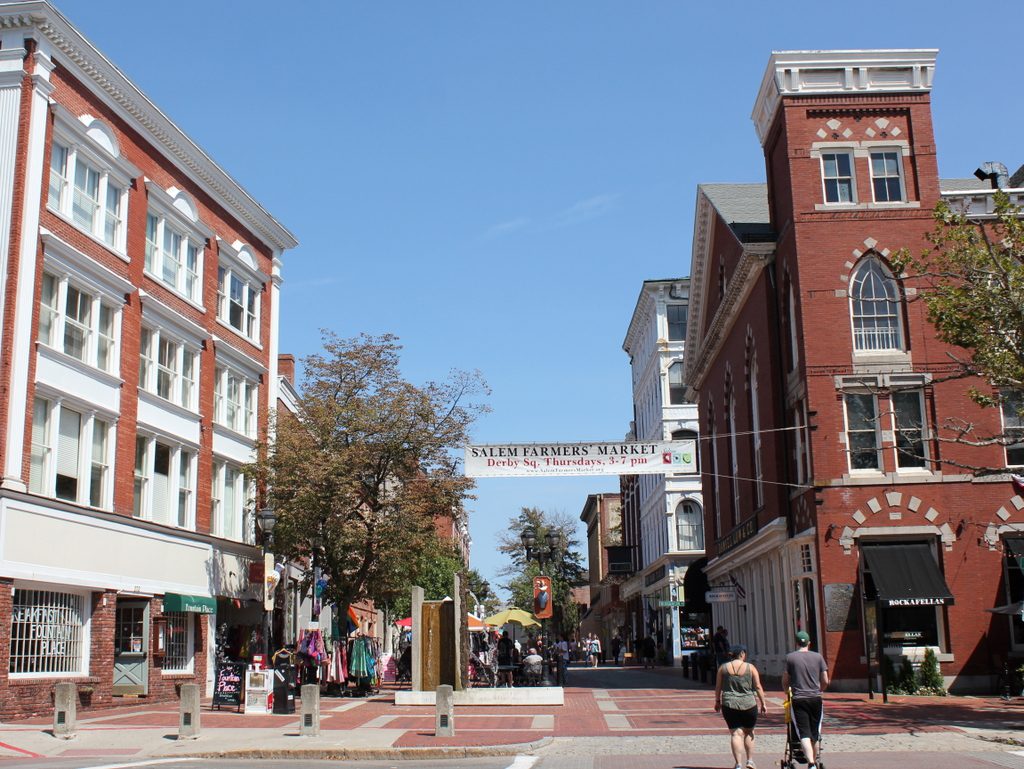 This scene shows the commercial center of Salem, with a mix of 19th century buildings that, for the most part, have not seen significant changes since the first photo was taken about a hundred years ago. Starting on the left side, at the northeast corner of Essex and Washington Streets, is the four-story, Classical Revival-style Neal and Newhall Building. It was completed in 1892, and can also be seen from a different angle in this previous post, which shows the Washington Street side of the building. When the first photo was taken, the storefront on the left side was holding an “Auction Sale,” with a sign in the window encouraging customers to “Buy You Holiday Presents Now and Save Money!” The upper floors housed a variety of professional offices, including real estate and insurance agents, and an optician whose second-floor office is marked by two large eyes that are reminiscent of the Doctor T. J. Eckleburg billboard in The Great Gatsby.

Just beyond this building are two smaller commercial blocks. Closer to the foreground is the three-story Browne Block, which was built in 1862 and was occupied by the Hall & Lyon drugstore when the first photo was taken. The shorter building to the right of it, located at 216-218 Essex Street, is even older, dating back to around 1801. It was originally owned by Jacob P. Rust, and in the first photo its tenants included the Palace of Sweets, an ice cream and confectionery shop that was located in the storefront on the left side. At the time it was probably the oldest building in this scene, and today it still stands as the oldest surviving commercial building in the city.

On the right side of the scene, the large building in the foreground is the First Church of Salem, which was built in 1826 and heavily modified in the 1870s. Upon completion, it had a fairly plain Federal-style building, which was work of noted Boston architects Solomon Willard and Peter Banner. It was built as a mixed-use property, featuring storefronts on the ground floor and the church itself on the second floor. The original design lacked towers, but these were added in the mid-1870s, when the exterior of the church was extensively rebuilt with a High Victorian Gothic-style design. By the time the first photo was taken, it was still in use as a church, and the ground floor was occupied by Daniel Low & Company, which sold jewelry, watches, and silverware.

Today, this scene has not had many changes in the century since the first photo was taken. All of the buildings in the foreground are still standing, although some have been altered in one way or another. The Neal and Newhall Building on the left has modern storefronts, and the Browne Block beyond it is nearly unrecognizable, with the top floor gone and a different facade. On the other side of the street, the white building just beyond the church has gained a fifth floor, and the church itself has lost the top of its towers. This building has not been used as a church since 1923, when the First Church merged with the North Church and relocated to their building at 316 Essex Street. The Daniel Low store is also gone, having closed in 1995, and the ground floor now houses the Rockafellas restaurant. 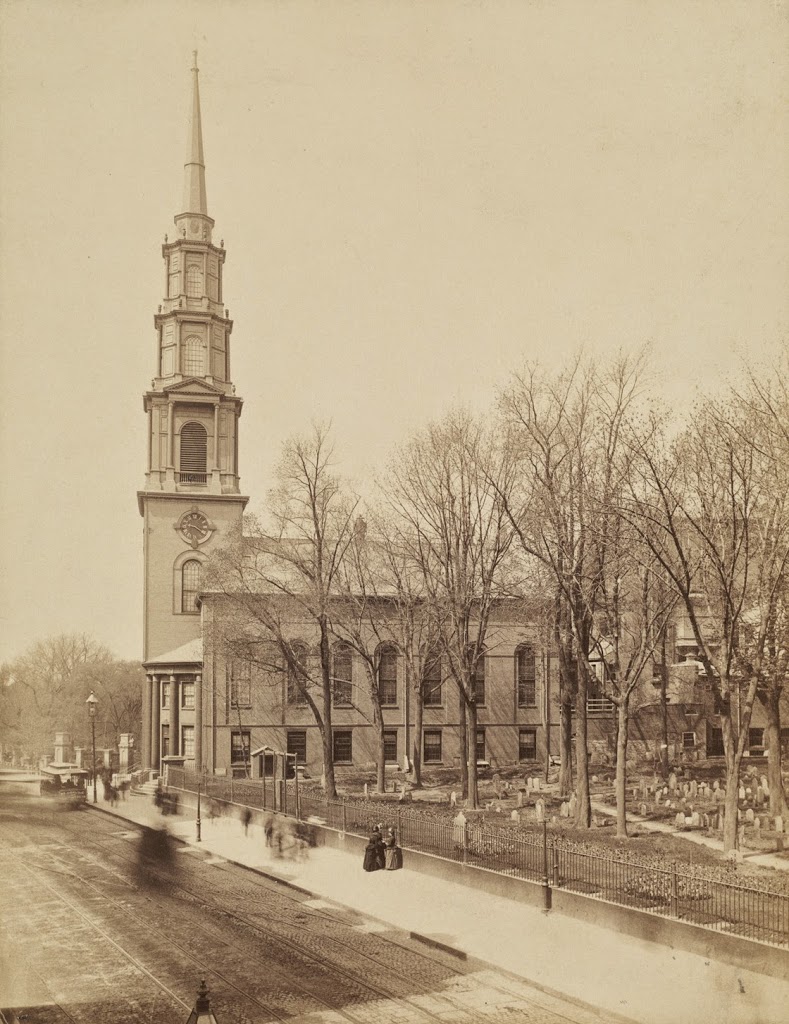 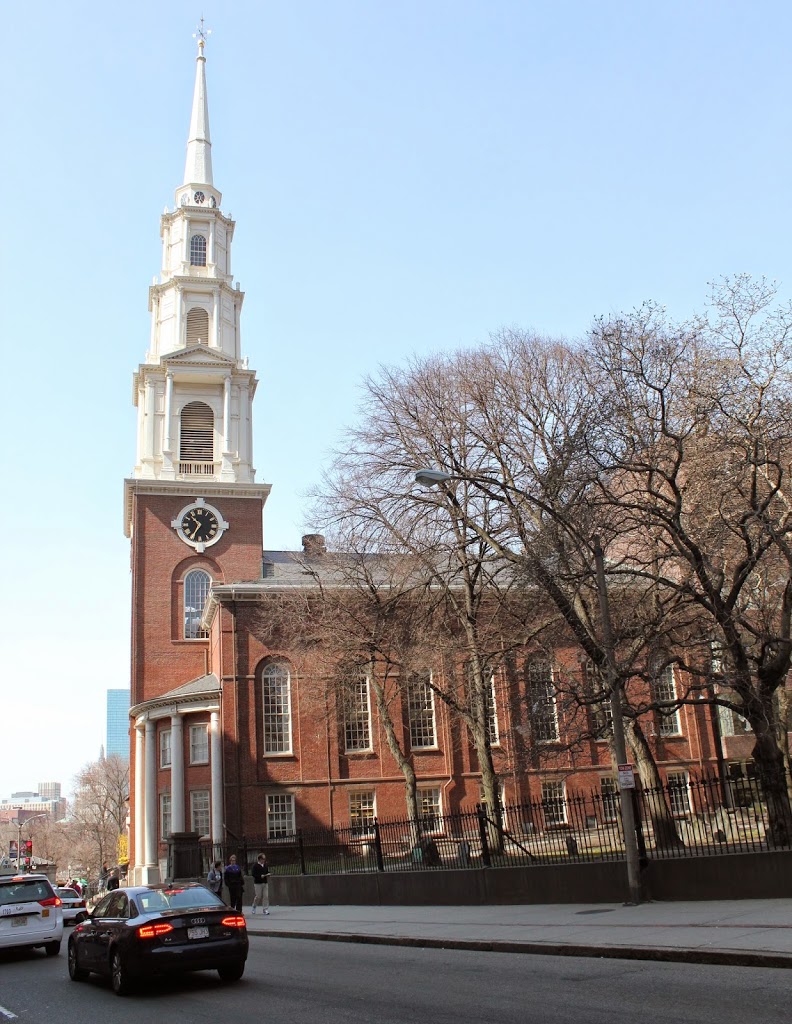 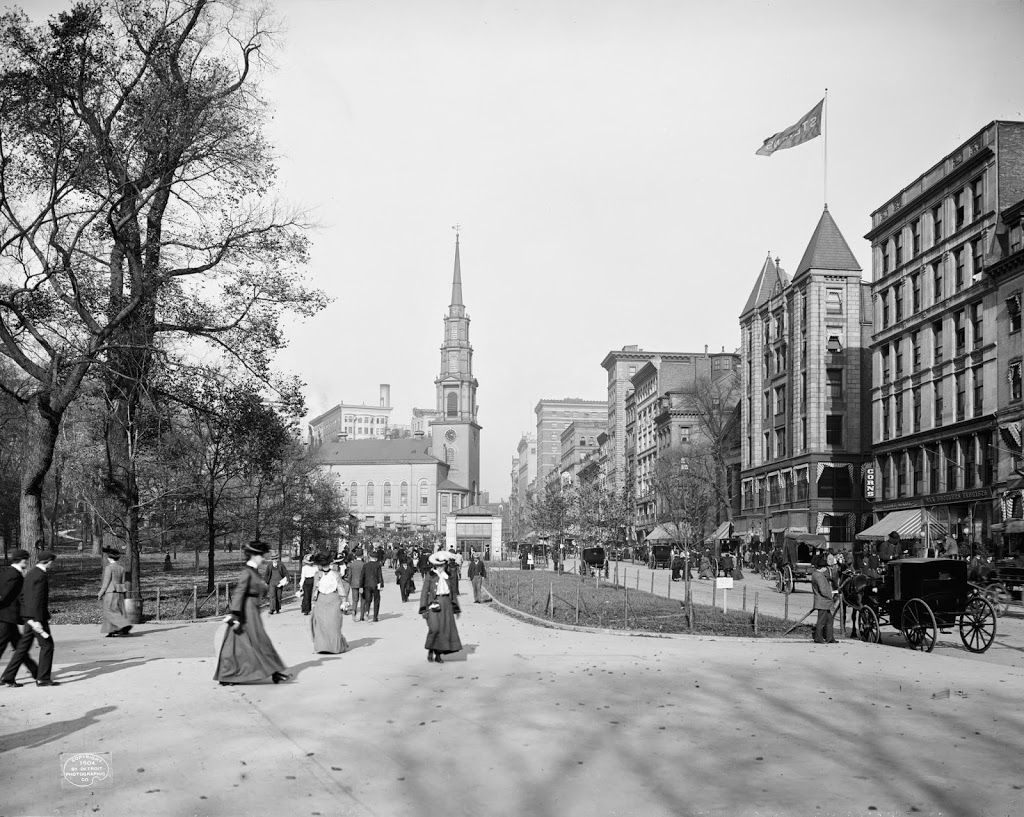 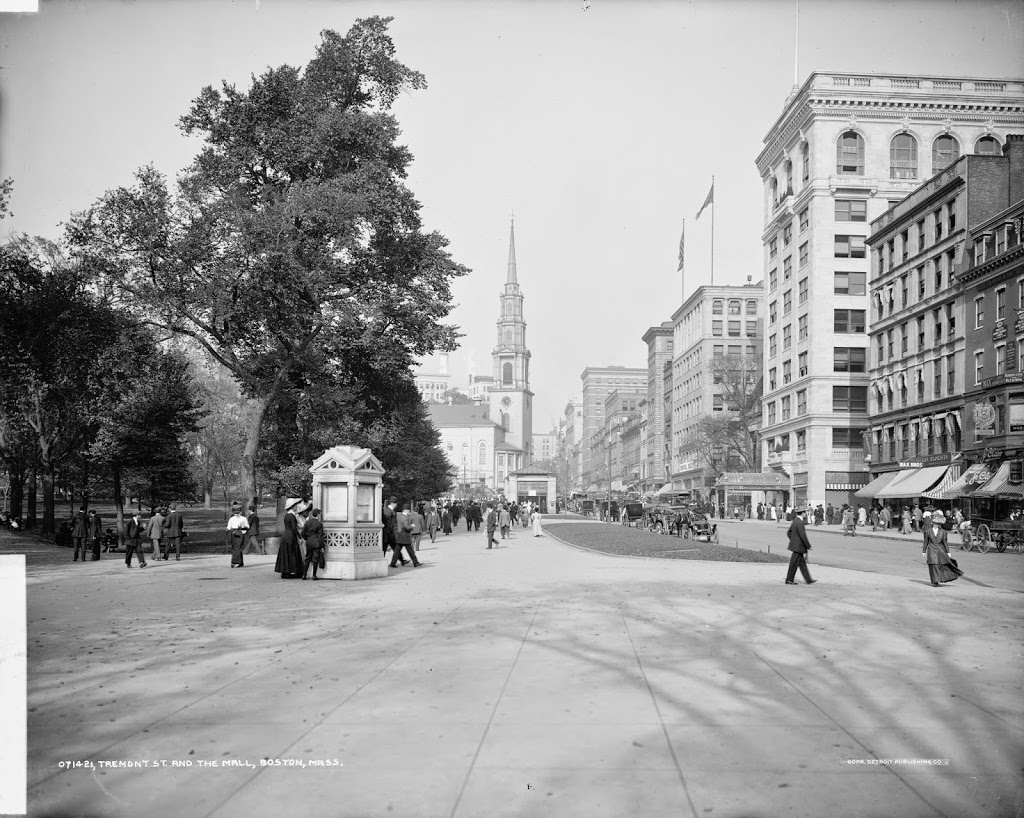 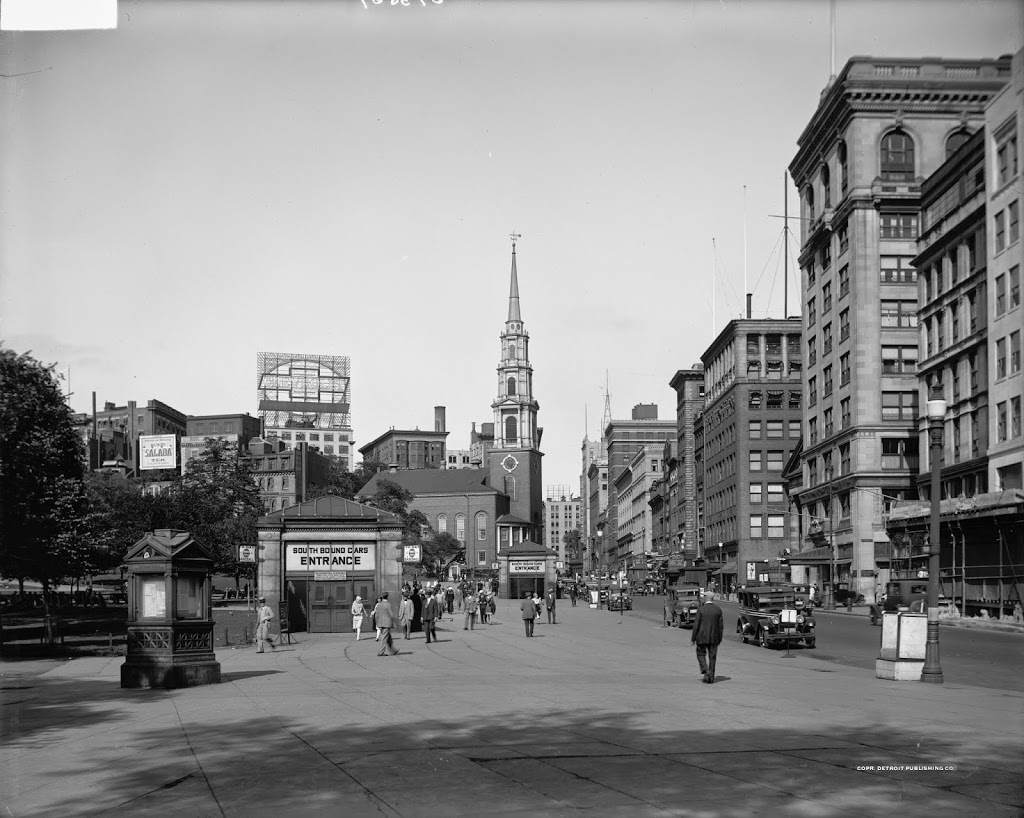 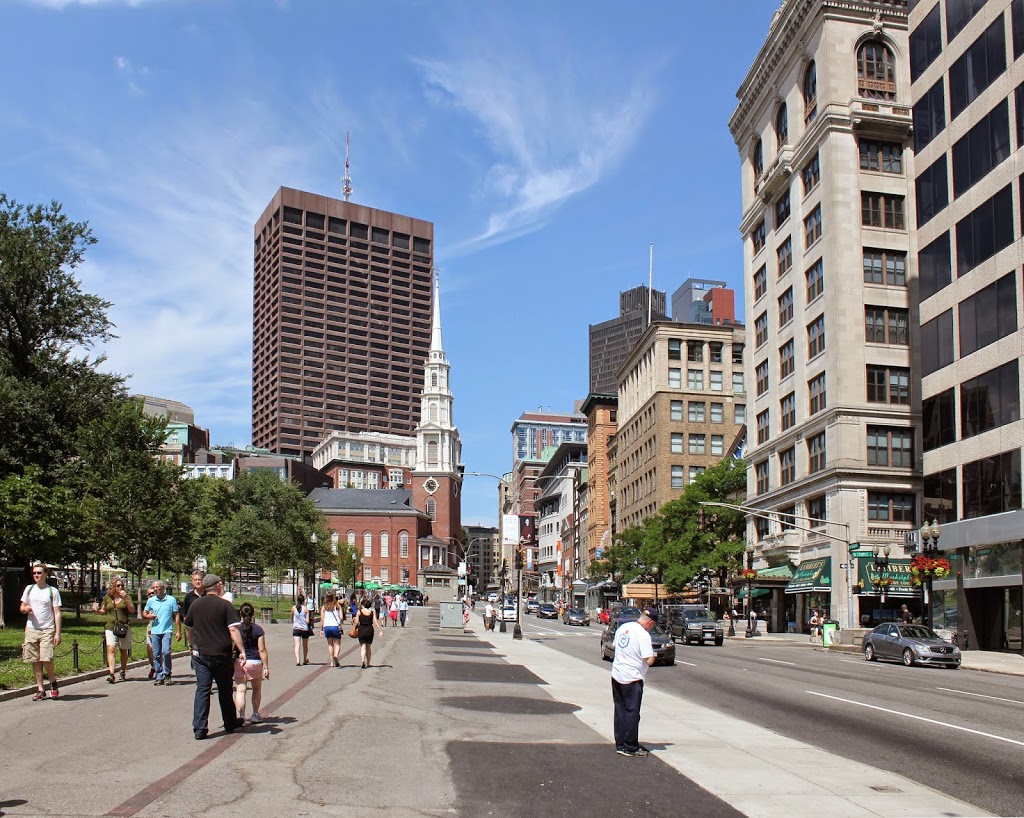