The house at 53 Dartmouth Street in Springfield, around 1938-1939. Image courtesy of the Springfield Preservation Trust. 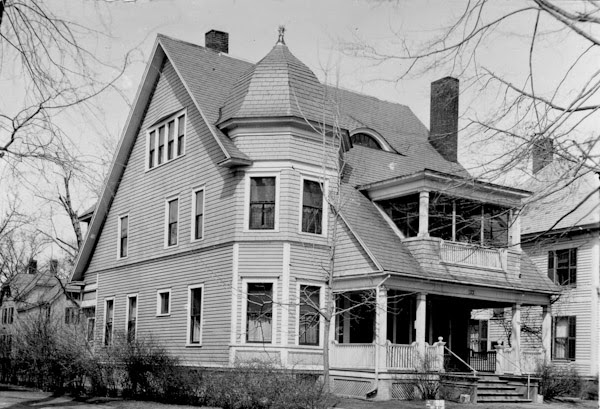 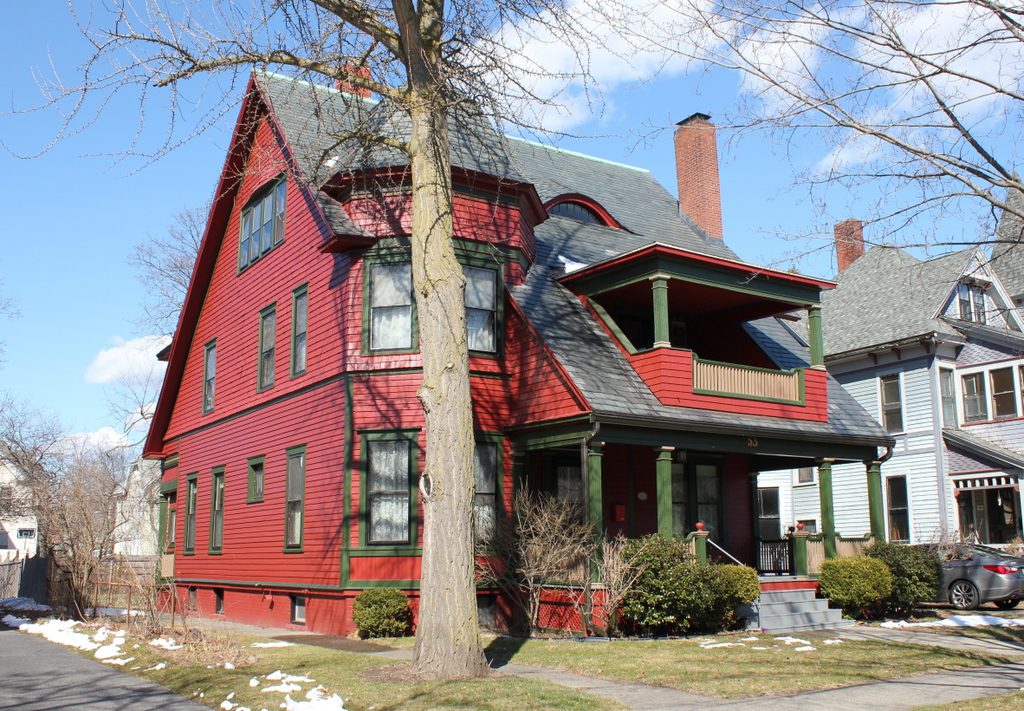 This house was built in 1894 as the home of lawyer Hervey K. Hawes, and it is a good example of Shingle-style architecture in a neighborhood that is largely dominated by earlier Queen Anne homes. Unlike these older homes, which usually featured a complex roof, highly ornamented exteriors, and a variety of building materials, this house reflects a shift toward simpler architecture. It features a single, large gable that gives the house a more horizontal focus, and the exterior is almost entirely covered in shingles, with minimal decoration.

Hawes evidently did not live in this house for very long, because by 1898 it was owned by Kirk Washburn. He was a longtime employee of publishers G. & C. Merriam, eventually becoming the company’s secretary and later the treasurer. Kirk and his wife Minnie had one child, Kirk, Jr., who also went on to work for G. & C. Merriam. However, he died in December 1918 from pneumonia caused by influenza that, based on the timing, was probably contracted during that year’s infamous flu pandemic. The elder Kirk lived here until his death in 1929, and Minnie died six years later.

By the time the first photo was take, the house was used as a rental property. It was the home of Richard and Elizabeth Whittey and their two children, and at the 1940 census they were paying $50 a month to rent the house. Richard’s occupation was listed as an investigator for a credit bureau, while his son Richard, Jr. was a sales manager and his daughter Evelyn was a secretary. The same census also provides their annual salaries, which were $2,300, $2,000, and $780, respectively. By way of comparison, a $2,000 salary at the time would be equal to about $35,000 today, when adjusted for inflation.

In 1976, the McKnight Historic District was added to the National Register of Historic Places, and his house was included as one of the contributing properties. Since then, it has been restored and remains in excellent condition, with hardly any noticeable differences from the 1930s photo. This past year, the Springfield Preservation Trust awarded the current owner with the Edward Sims Award for Stewardship, in recognition of the home’s level of preservation.