Memorial Hall on the campus of Harvard University in Cambridge, around 1904. Image courtesy of the Library of Congress, Detroit Publishing Company Collection. 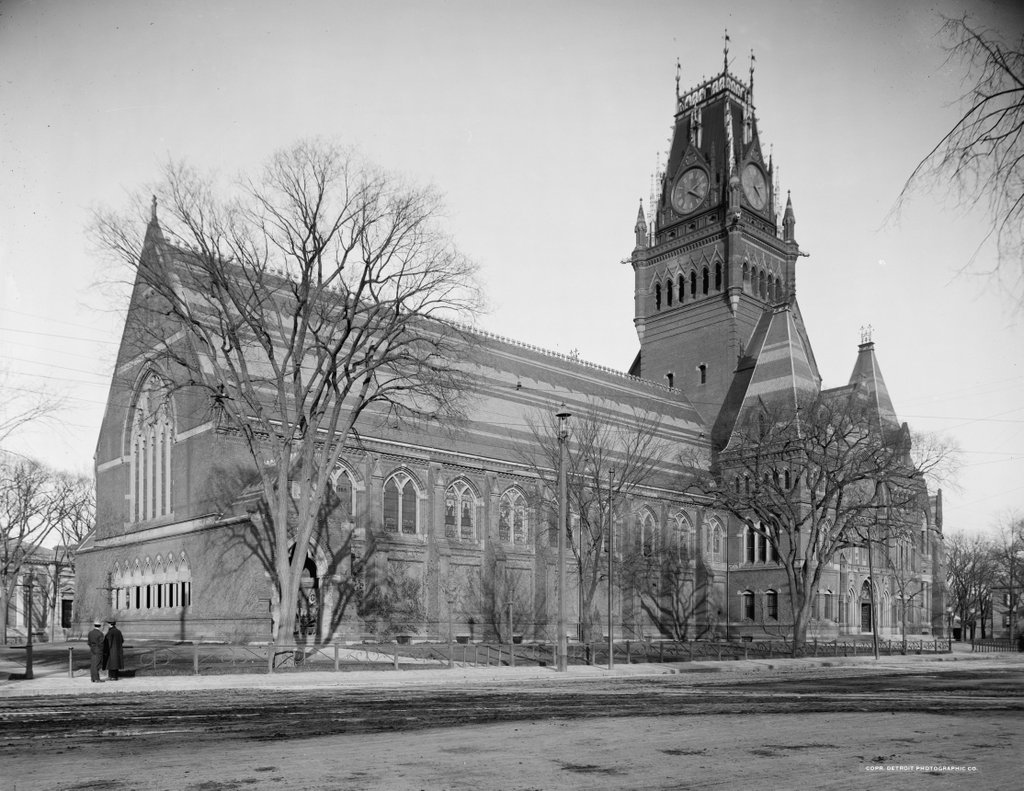 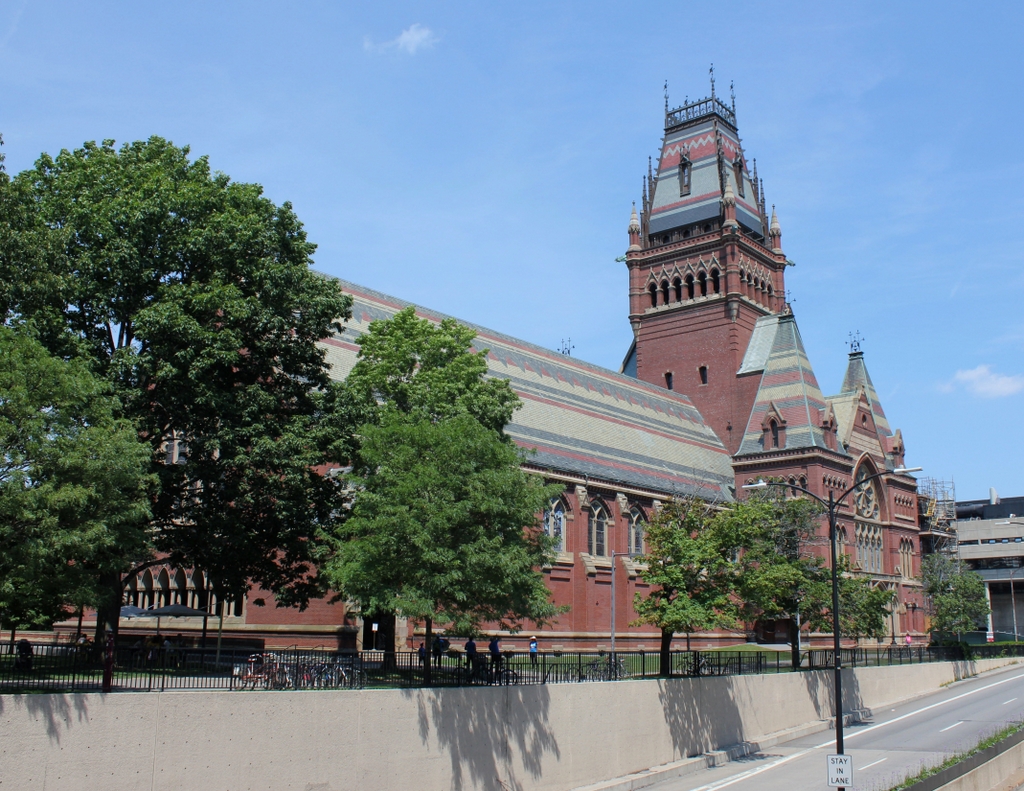 Harvard’s Memorial Hall was built between 1870 and 1878, in honor of the Harvard students and graduates who had fought for the Union cause during the Civil War. Its construction was primarily funded by an alumni committee that raised $370,000 in contributions, in addition to a separate bequest of $40,000 from 1802 graduate Charles Sanders for the construction of a theater. As a result, the building featured three distinct parts: a large dining hall on one side, the Sanders Theatre on the other side, and the Memorial Transept between them.

The building was designed by Harvard graduates William Robert Ware and Henry Van Brunt, and it is generally regarded as an architectural masterpiece and one of the country’s finest examples of High Victorian Gothic architecture. This style reached its peak of popularity in the late 1860s and early 1870s, when it was nearly ubiquitous for schools, churches, government buildings, and other public buildings. Memorial Hall incorporates many of the typical features of this style, including tall windows with pointed arches, steep roofs with multi-colored tiles, a tall tower, and a red brick exterior with contrasting light-colored stone trim.

Construction began in 1870, and it was marked by the laying of the cornerstone on October 6. Many dignitaries attended the event, including Governor William Claflin, Senators Charles Sumner and Henry Wilson, and General George Meade, who had led the Union victory at Gettysburg seven years earlier. U. S. Attorney General Ebenezer Hoar, a Massachusetts native and Harvard alumnus, gave the dedication address, and the ceremony also included the singing of a hymn written for the occasion by Oliver Wendell Holmes Sr.

The various parts of the building were completed in different stages, and both the dining hall and the Memorial Transept were finished in 1874. The dining hall occupies the majority of the building, including everything to the left of the tower from this scene. It measured 164 feet in length, 60 feet in width, and 80 feet from the floor to the top of the roof. The hall had room for over a thousand people to sit at the tables, although the actual number of Harvard students who ate here in the late 19th century was generally much lower, with around 450 to 650 students in any given year.

The Memorial Transept is located just to the right of the dining hall, inside the main entrance on the right side of this scene. It spans the entire width of Memorial Hall, separating the dining hall from the theater, and it has a similar entrance on the other side of the building. Inside, the transept measures 112 feet in length in 30 feet in width, and it features marble tablets on the walls, which contain the names of 136 Harvard students and alumni who died in the war. Only Union soldiers are recognized here; many Harvard graduates also died fighting for the Confederacy, but their names are not included in the transept.

On the other side of the transept, and barely visible from this angle, is the Sanders Theatre, which was completed in 1875. Originally it could seat 1,500 people, and it was used as a venue for commencement exercises, along with a number of other events, including concerts and lectures. The theater continued to be used for commencements until 1922, and during this time perhaps the most famous graduate here was Theodore Roosevelt, of the class of 1880. Many years later, he would return here as a guest speaker in the same theater, and over the years other notable speakers have included Winston Churchill and Martin Luther King Jr.

From the exterior, the most distinctive feature of Memorial Hall is its 200-foot tower. However, this has been altered and rebuilt several times, beginning in 1877 when the original architects made some changes to its original appearance. Then, in 1897 a clock was added to the top of the tower, with one face on each of the four sides. The first photo was taken soon after this, and the building retained this appearance until 1956, when the upper portion of the tower was destroyed in a fire.

In the meantime, the use of Memorial Hall also changed in the 20th century. The dining hall closed in 1926, and for the next 70 years this space was used for a wide variety of events, ranging from banquets to blood drives. Then, in the 1990s this space underwent an extensive renovation, and it was restored to its original use as a dining hall. It was renamed Annenberg Hall in 1996, and since then it has been used as the primary dining hall for Harvard freshmen.

Along with the interior work, the exterior of the building was also restored in the 1990s, most notably with the reconstruction of the top of the tower. The top had been missing ever since the 1956 fire, but it was rebuilt in 1999, using the designs from the 1877 work on the tower. As a result, the exterior of Memorial Hall probably more closely resembles its 19th century appearance today than it did when the first photo was taken in the early 1900s.

Other than the changes to the tower, the only significant difference between these two photos is Cambridge Street in the foreground. In the first photo it was an unpaved street with several trolley tracks running down the middle, but in the 1960s it was lowered to build a long underpass, with a pedestrian mall atop it. This allowed direct access from Harvard Yard to the sections of the campus north of Cambridge Street, although it also had the consequence of significantly changing the streetscape here in front of Memorial Hall.