The house at 171 Boston Road, at the corner of Coleman Street in Springfield, on October 4, 1938. Image courtesy of the Springfield Building Department. 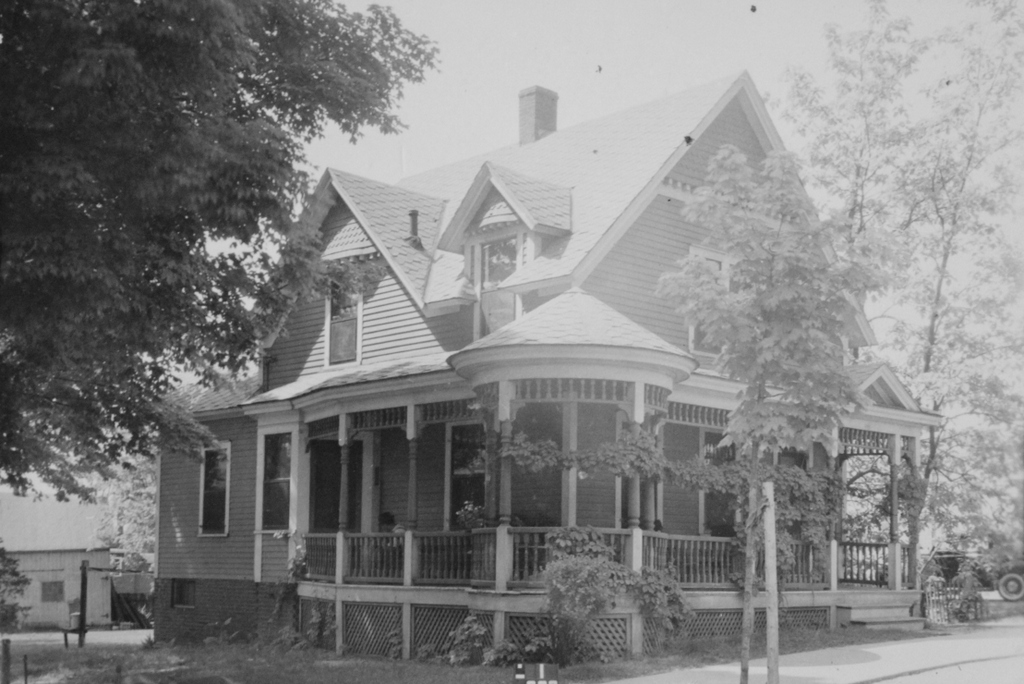 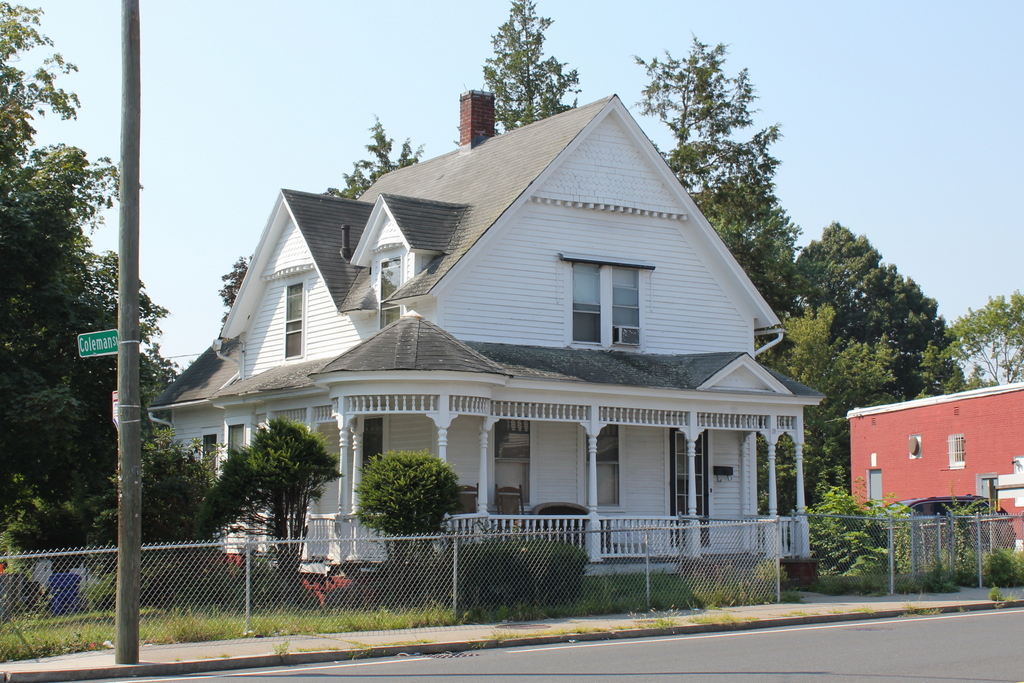 Today, Boston Road a busy four-lane road, lined with gas stations, restaurants, shopping plazas, used car dealerships, and other commercial development for most of its 3.3-mile length from Pine Point to the Wilbraham town line. However, as discussed in a previous post, this section of Springfield was lightly populated prior to the early 20th century. While passing through here in 1789, George Washington had described the area as “an almost uninhabited Pine plain,” and not much would change for another century, despite being located on the main route from Springfield to Boston. Much of this had to do with the poor quality of the soil, which made the land undesirable for farming. Distance was also a factor in this; modern-day Pine Point is about three miles from downtown Springfield, which made it impractical to commute into the city on a daily basis.

However, things had begun to change by the late 19th century, when a number of Boston Road landowners began subdividing their properties with new streets and house lots. This was likely spurred by the opening of a trolley line nearby on Berkshire Avenue, which linked downtown Springfield to Indian Orchard. Residents here could now commute to either location, or take connecting lines to other destinations, and by the early 20th century Pine Point had been transformed into a working class suburban neighborhood.

Over the years, nearly all of the old homes here on Boston Road have been demolished, either to clear the way for a new subdivision or to repurpose the land for commercial use. This house, located at the corner of Boston Road and Coleman Street, appears to be the oldest surviving house on Boston Road, and probably the only one that predates the development of the modern street grids.

It is difficult to determine the exact date when this house was built, in part because houses in the outlying areas of the city generally did not have street numbers during the 19th century. Various maps show houses in this vicinity as early as 1835, but it is not easy to tell exactly which houses were which. The documentation on the state’s MACRIS database lists it as having been built around 1882, based on atlases and directories of the period, and this seems like a plausible date, particularly since its Queen Anne-style design matches with architectural tastes of the early 1880s. In many ways, its design resembles a smaller version of the much larger Queen Anne houses that were built in the city’s McKnight neighborhood around the same time.

The first recorded resident of this house was William G, Pierce, who appears in the 1882 city directory as a merchant of the firm William G. Pierce & Co. However, he is not listed in either the 1881 or 1883 directories, so his stay here at this house may have been short. The next 15 years of this house’s history are unclear, but by 1897 it was owned by Julien W. Belanger, a merchant tailor who lived here with his wife Corinne, their five children, and a servant. His tailor shop was located on Main Street in downtown Springfield, and he likely would have used the new trolley line to commute to work. He and his family were living here as late as 1900, but by 1901 they had moved to Adams Street, and by 1904 they had moved to Canada, where both Julien and Corinne had been born.

By 1905, this house was being rented by Michael and Mary Byrne, who lived here with their four children. Like the Belangers, they were also immigrants, with Michael from Scotland and Mary from England. In city directories of the period, Michael is listed as a papermaker, although according to the 1910 census he was an automobile machinist. The census also lists their son Adam as having the same occupation, while their daughter Mary was a saleswoman at a department store, and their son Charles was an assistant bookkeeper at a department store.

The Byrne family left Springfield soon after the 1910 census, and by 1912 this house was owned by Albin M. Kramer, a civil engineer who had immigrated to the United States from Germany as a young child in 1872. His wife Rose was also an immigrant, from England, and they had married within a few years after her arrival in 1899. During the 1920 census, they were living here in this house with their children Alwin, Frederick, Vincent, and Marguerite, who ranged in age from 10 to 16.

Of the four Kramer children, Alwin would probably go on to have the most noteworthy career. He was 16 years old during the 1920 census, and a year later he graduated from Central High School. From there he went to the U. S. Naval Academy thanks to an appointment by Springfield’s Congressman Frederick H. Gillett, who was at the time the Speaker of the House. Alwin went on to have a long career in the Navy, but he is best remembered for his role in the events leading up to the attack on Pearl Harbor.

In 1939, Alwin became the head of OP-20-GZ, which was involved in intercepting, decrypting, and translating coded messages sent by the Japanese government. He was particularly busy in early December 1941, when his office decrypted a series of 14 messages sent to the Japanese embassy in Washington D.C. The last of these, sent in the early morning hours of December 7, instructed the Japanese ambassador to end diplomatic relations with the United States. However, it did not specifically indicate that an attack or a declaration of war was imminent, and there were a number of delays in Washington before this information was finally sent to Pearl Harbor, arriving several hours after the attack.

Alwin Kramer would go on to serve with distinction in World War II, and was eventually promoted to captain. However, his actions in early December, and those of his colleagues and superiors, fell under increased scrutiny after the war, eventually leading to a Congressional inquiry in 1946. The hearings were likely politically motivated, in an attempt by Republicans to discredit the Roosevelt and Truman administrations, but Captain Kramer did himself no favors with his confusing and often contradictory testimony, and he ended up retiring from the Navy by the end of the year. Nonetheless, he was never formally assigned any blame, and his wartime promotions suggest that his superiors in the Navy did not find fault in his actions. He died in 1972 at the age of 69, and he was buried in Arlington National Cemetery.

In the meantime, Kramer’s family continued to live here in his childhood home until around 1929, although by the 1930 census his parents and two younger siblings were living in a house at 127 Massachusetts Avenue. The next long-term residents here at 171 Boston Road were Walter and Mazie Spickler, who were here as early as 1933. They were both in their mid-40s at the time, and they lived here with their son George and his wife Edna. George and Edna subsequently moved to a house of their own on nearby Denver Street by 1937, but Walter and Mazie were still here on Boston Road when the first photo was taken in 1938. According to the 1940 census, they paid $37 per month in rent, and Walter earned $1,560 per year as a fireman at a cotton mill.

Walter Spickler died shortly after the census was taken, in September 1940, at the age of 54. Mazie continued to live here for at least a few more years, and the 1944 city directory shows her working as an inspector at Westinghouse. However, she moved by the following year, because the 1945 directory shows Franklin and Virginia Lewis living here. At the time, Franklin was working as a collector for the Springfield Union newspaper, and he later became the circulation supervisor for the Springfield Newspapers. He lived here until his death in 1969, at the age of 64. It seems unclear as to how much longer Virginia lived here, but she ended up outliving Franklin by more than 40 years, before her death in 2010 at the age of 104.

Today, more than 80 years after the first photo was taken, remarkably little has changed in this scene. The property is now surrounded by a chain link fence, and the house appears to have a different paint scheme, but otherwise its exterior looks essentially the same as it did in the 1930s. The shed in the backyard on the far left is also still there, as is the brick building on the far right side. Although mostly hidden by trees in the first photo, this building was here in the 1930s, and it is best known as the site of the first Friendly’s restaurant, which opened here in 1935. In general, very few historic buildings have survived the various waves of development along Boston Road, but this house stands as an unusual reminder of what Springfield’s main commercial thoroughfare once looked like.