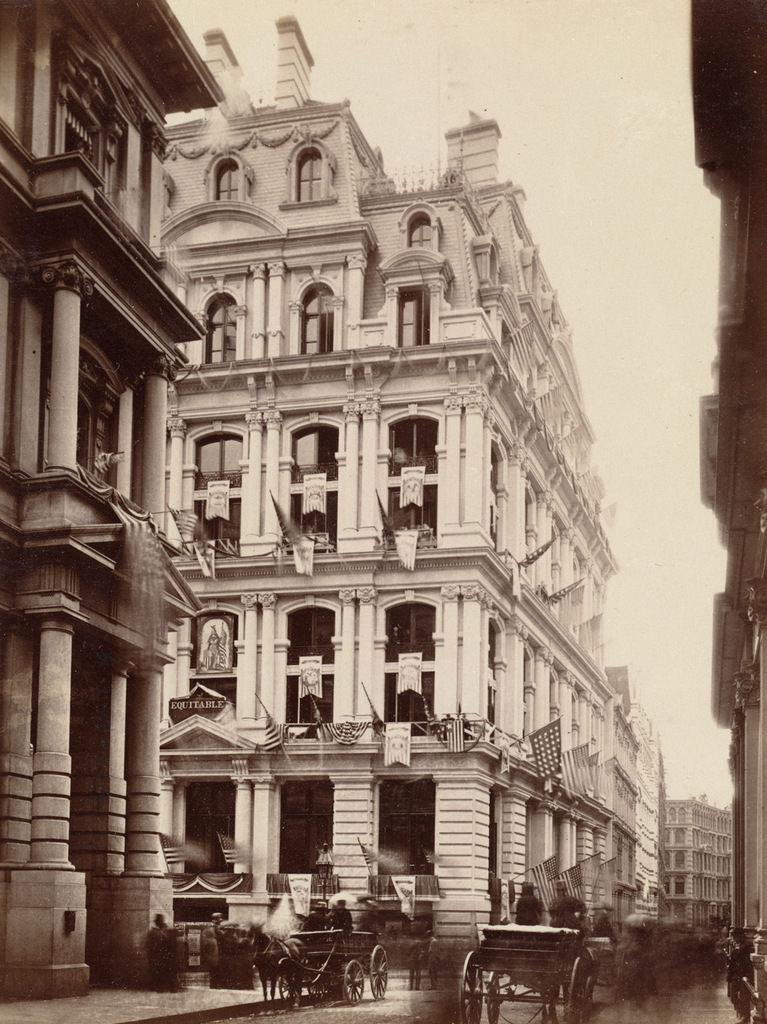 The view down Devonshire Street in 2015: 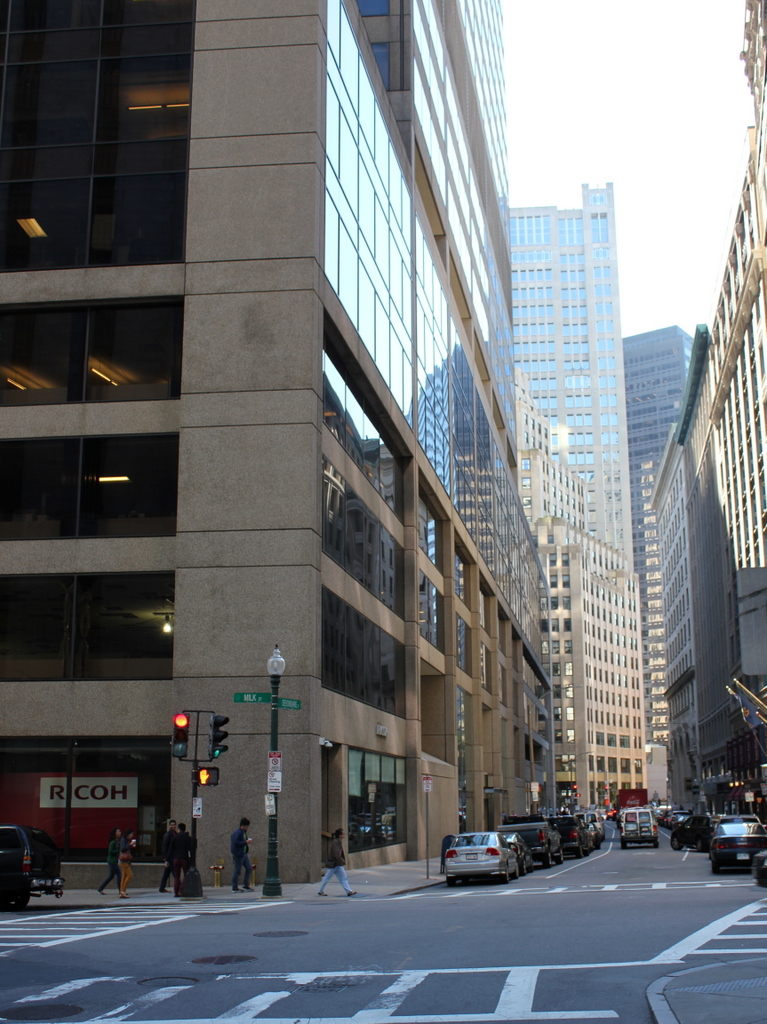 Like the photo in the previous post, taken just around the corner on Milk Street, this scene shows Boston during the 100th anniversary celebration of the Battle of Bunker Hill, when many of the city’s buildings were decorated with flags and patriotic bunting. The building in the foreground here was the home of the Equitable Life Assurance Society’s Boston branch, and it was also known as the Henry H. Hyde Building, after the company’s founder. This area was devastated by the Great Boston Fire of 1872, but within a few years the city had largely rebuilt, and in 1874 Equitable opened this elegant Second Empire style building as their Boston office, in a prominent location directly across from the Post Office, which can be seen to the left in the first photo.

Based on city maps, the Equitable Building was demolished sometime between 1912 and 1938, and was replaced with the old First National Bank Building. his was, in turn, demolished in the 1970s to build One Federal Street, a 38 story skyscraper that now fills the rectangular block between Milk, Devonshire, Arch, and Federal Streets. Since this is the heart of Boston’s Financial District and the home of many of its skyscrapers, there are no surviving buildings from the 1875 photo in the 2015 scene.

Looking west up Milk Street from Devonshire Street in Boston, on June 17, 1875. Image courtesy of the Boston Public Library. 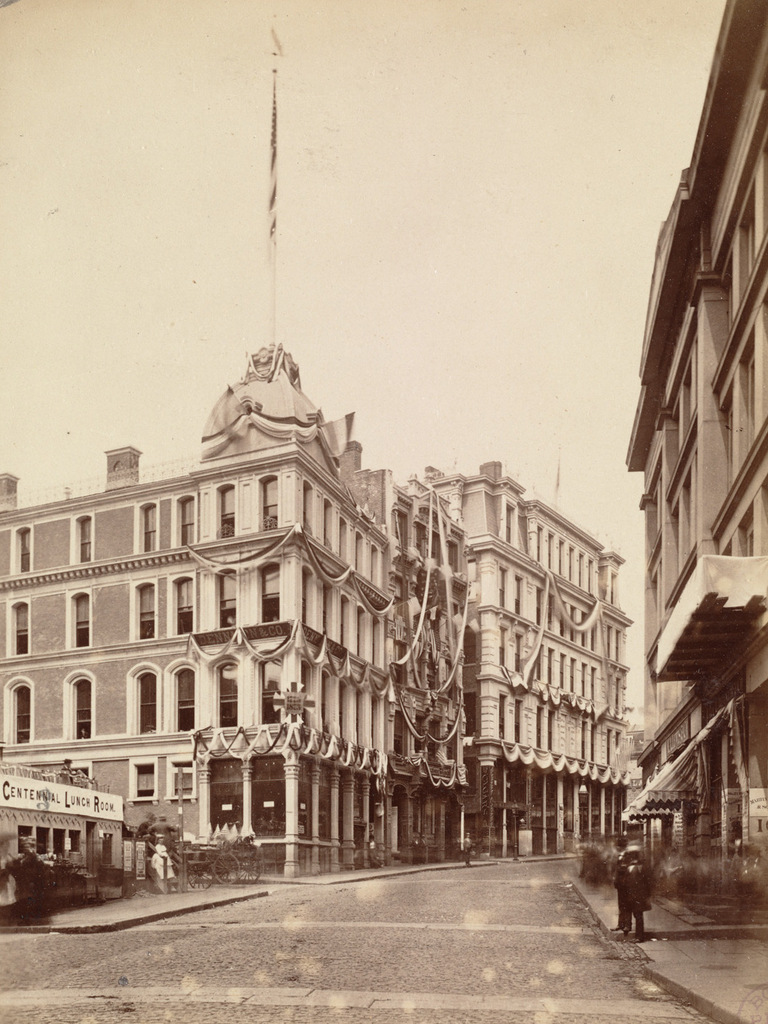 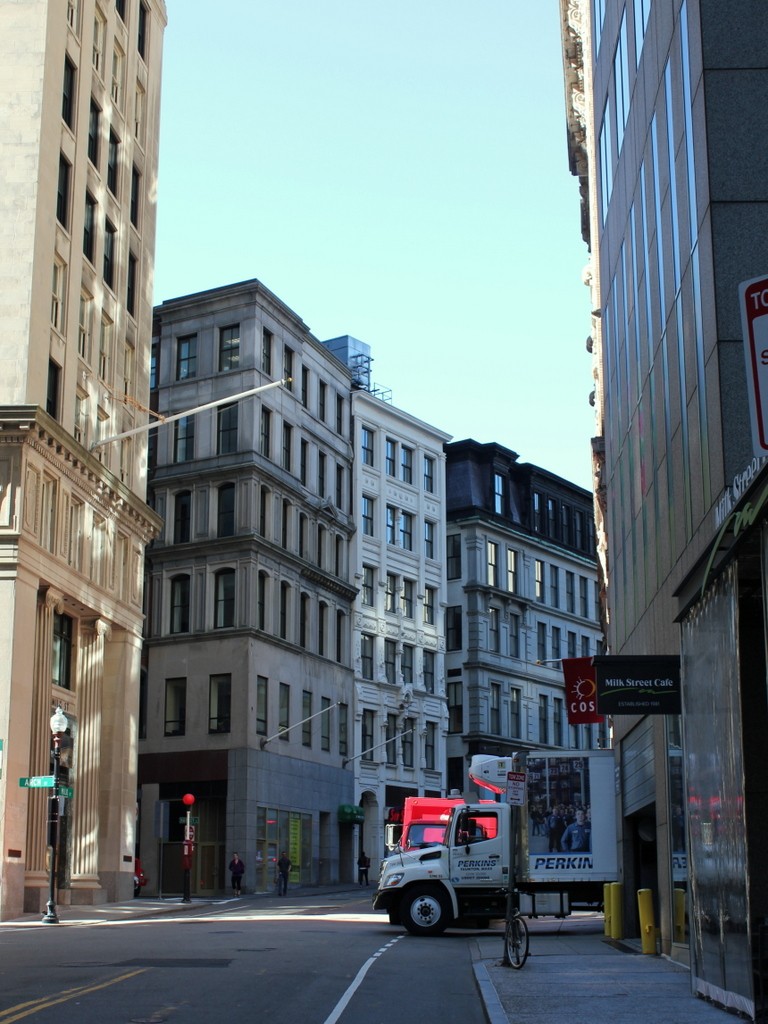 When the first photo was taken, the city was celebrating the 100th anniversary of the Battle of Bunker Hill, and these buildings on Milk Street were covered in patriotic bunting. All three of the buildings in the center of the photo were new; just three years earlier the area had been destroyed in the Great Boston Fire of 1872, as seen in the view looking down Milk Street in this post. However, the city soon rebuilt, and this area quickly became a major commercial center again.

All three of these buildings survive today, although with some alterations. The one on the left, at the corner of Milk and Hawkey Streets, is the Goddard Building. It was completed in 1873, and over the years it has been expanded, with two additional stories on top. The building to the right of it has also grown over the years. It was built on the site of Benjamin Franklin’s birthplace, and the decorative facade includes a bust of Franklin above the second story windows. The third building in the photo, on the right, was also built in 1873, at the corner of Milk and Washington Streets. It was originally the home of the Boston Transcript newspaper, which at the time was the largest circulating daily newspaper in New England. The newspaper has been defunct since 1941, but the historic building is still standing today. 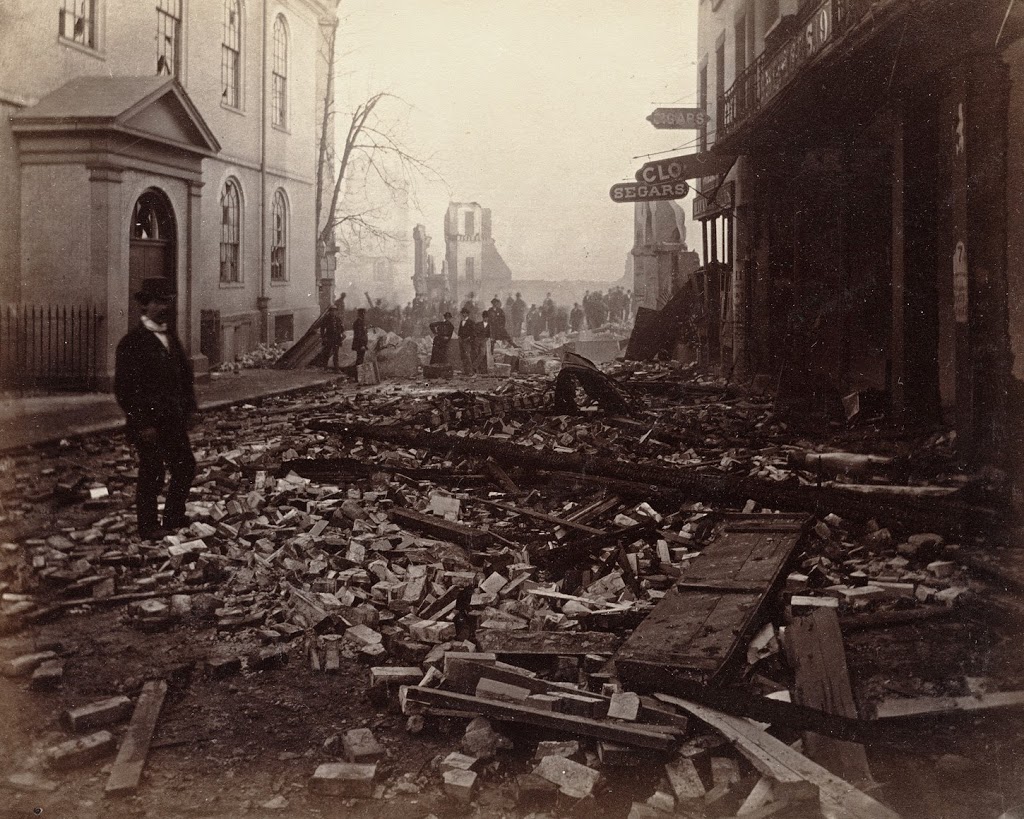 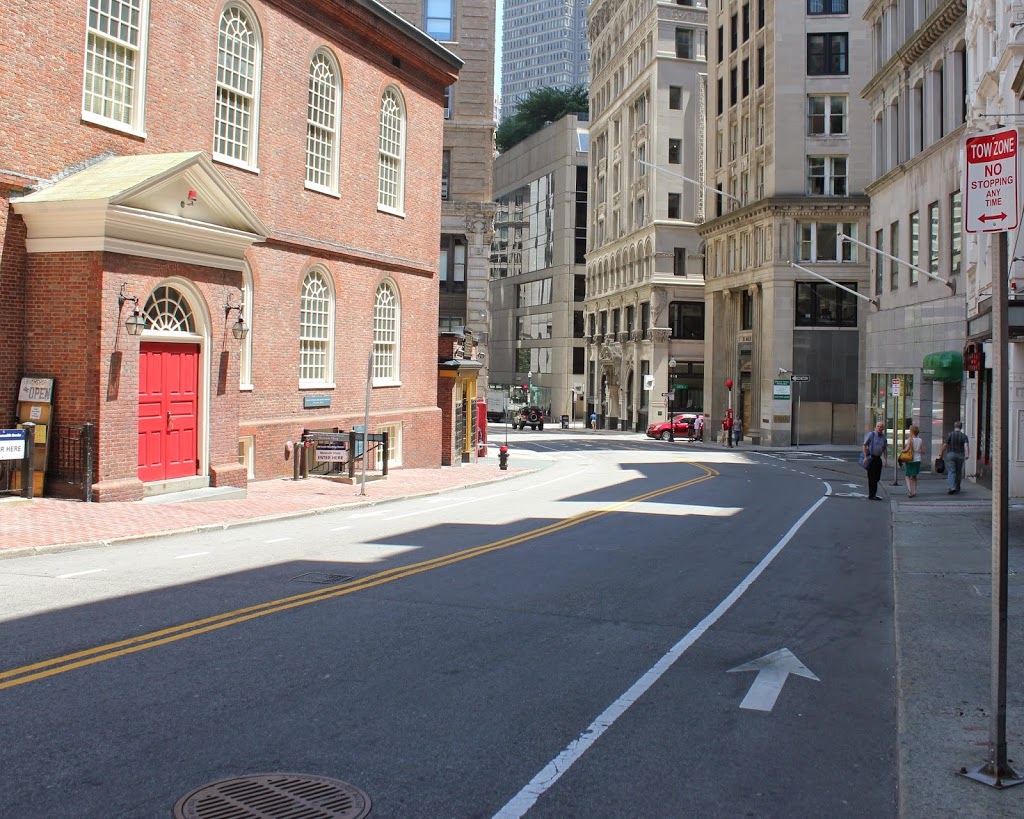 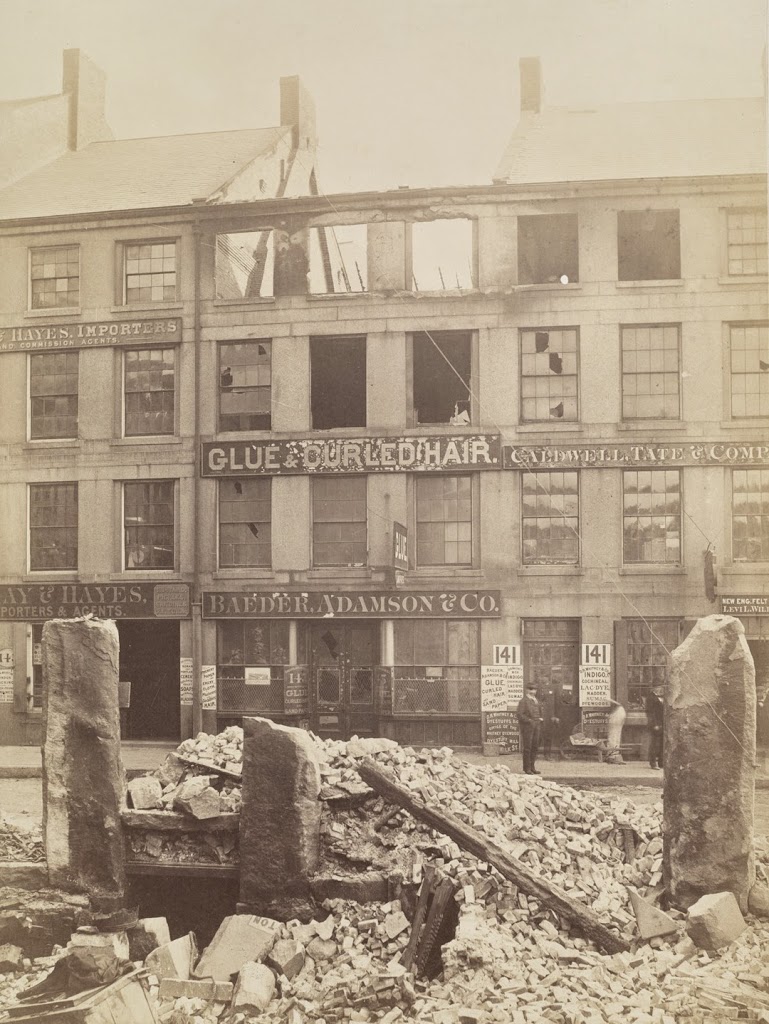 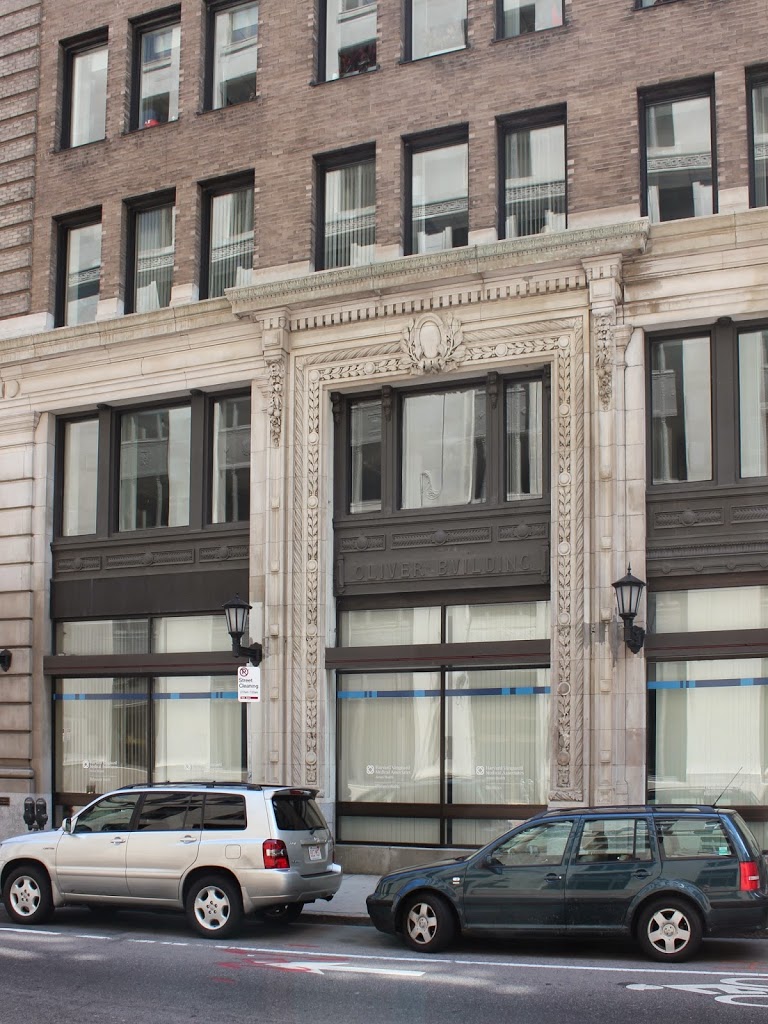 Only a year after the far more well-known fire in Chicago, Boston suffered a similarly disastrous fire of its own.  It devastated much of the southern part of Boston’s downtown, reaching all the way up to Milk Street, where this photo was taken.  The building in the 1872 photo advertises “glue, curled hair, and sandpaper” which seems like an odd combination to today’s readers.  But, “curled hair” in this case referred not to a hairstyle but to some sort of industrial product made with animal hair.  As to its specific use, I am not sure, but today neither the buildings nor the glue, curled hair, and sandpaper industry are still at this location.  Today, the building at the site is identified above the ground floor windows as the Oliver Building, and was built in 1903, suggesting that at least one other building occupied this spot after the 1872 photo was taken. 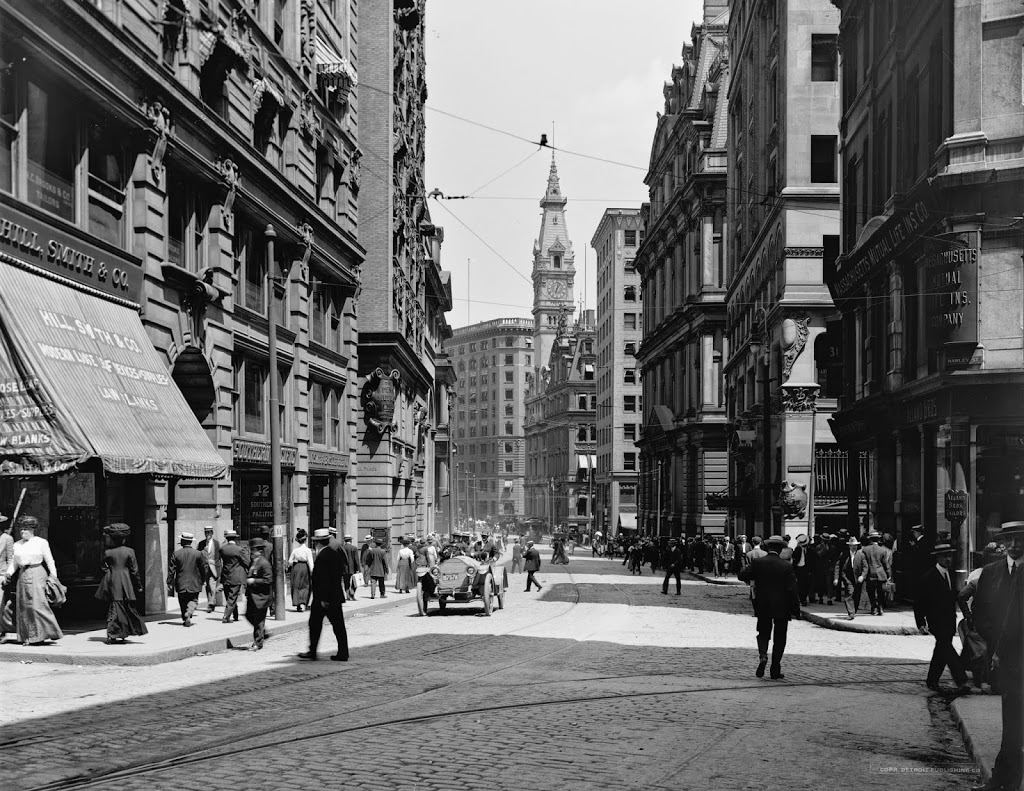 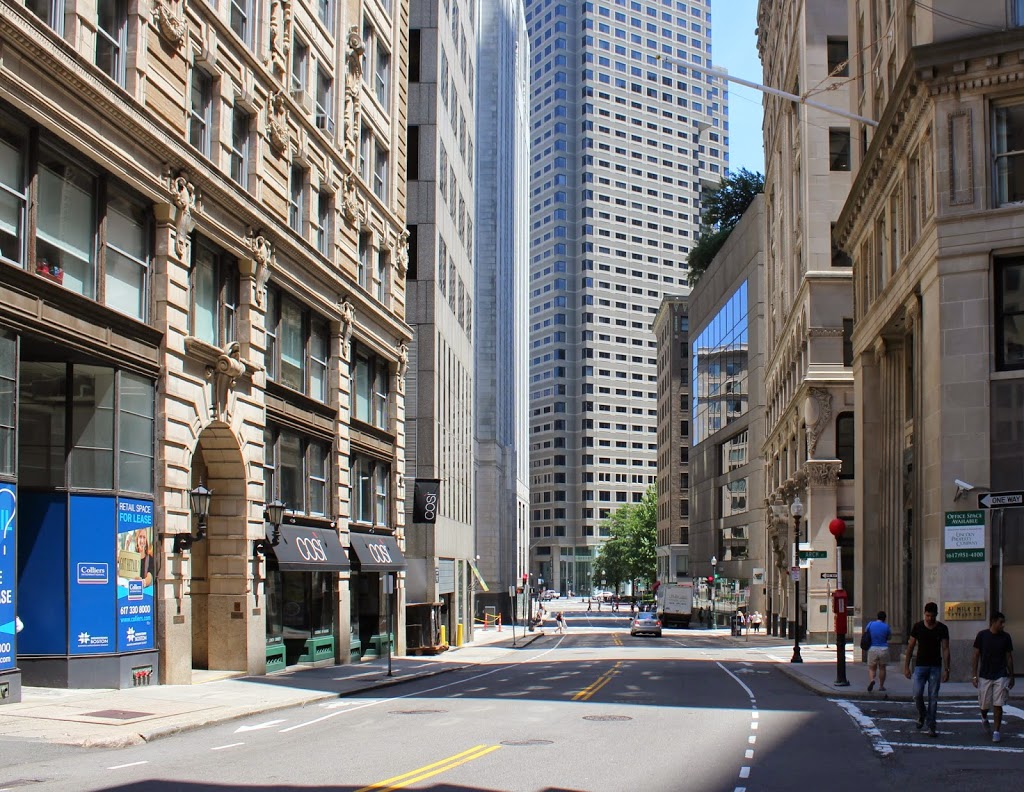