The house at 101 Magnolia Terrace in Springfield, around 1938-1939. Image courtesy of the Springfield Preservation Trust. 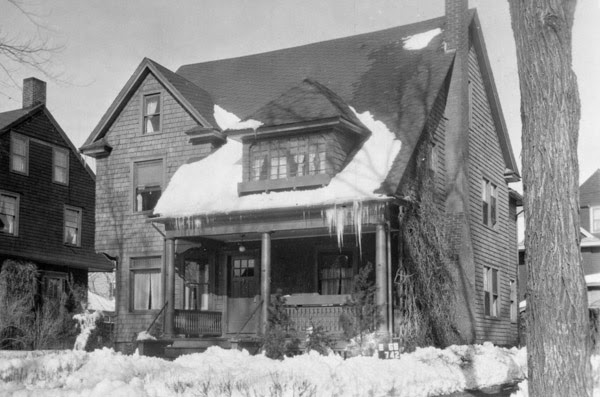 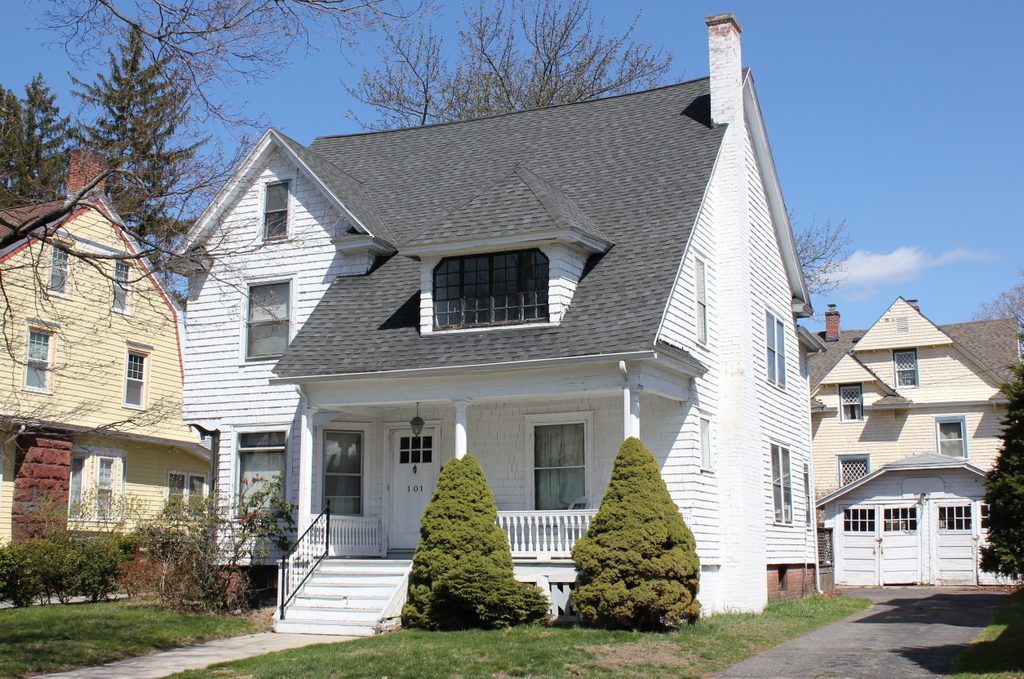 This house was built in 1909, and was originally the home of George H. Wight. He only lived here for a short time, though, because by the late 1910s the house had been sold to Fred I. Bemis, an insurance clerk for Massachusetts Mutual. He was the grandson of Stephen C. Bemis, the founder of the Springfield-based Bemis & Call Tool Company, and he and his wife Flora had one child, Anna. Fred and Flora were living here by themselves during the 1920 census, but by 1930 they had moved to nearby Spruceland Avenue, where they lived with Fred’s cousin. However, this house remained in the family, because in 1930 Anna was living here with her husband, Preston T. Miller, and their two sons.

Anna and Preston lived here until the late 1930s, around the time that the first photo was taken. They moved to Canaan, New Hampshire, where they were living by the 1940 census, and they sold the house the following year. Nearly 80 years later, the house has hardly changed, and still stands as one of Forest Park’s many historic upscale homes from the turn of the 20th century. Along with the other homes in the neighborhood, it is now a contributing property in the Forest Park Heights Historic District, which was added to the National Register of Historic Places in 1982.

The house at 83 Magnolia Terrace in Springfield, around 1938-1939. Image courtesy of the Springfield Preservation Trust. 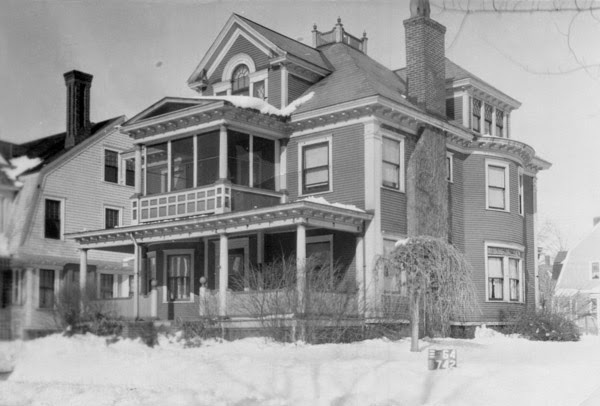 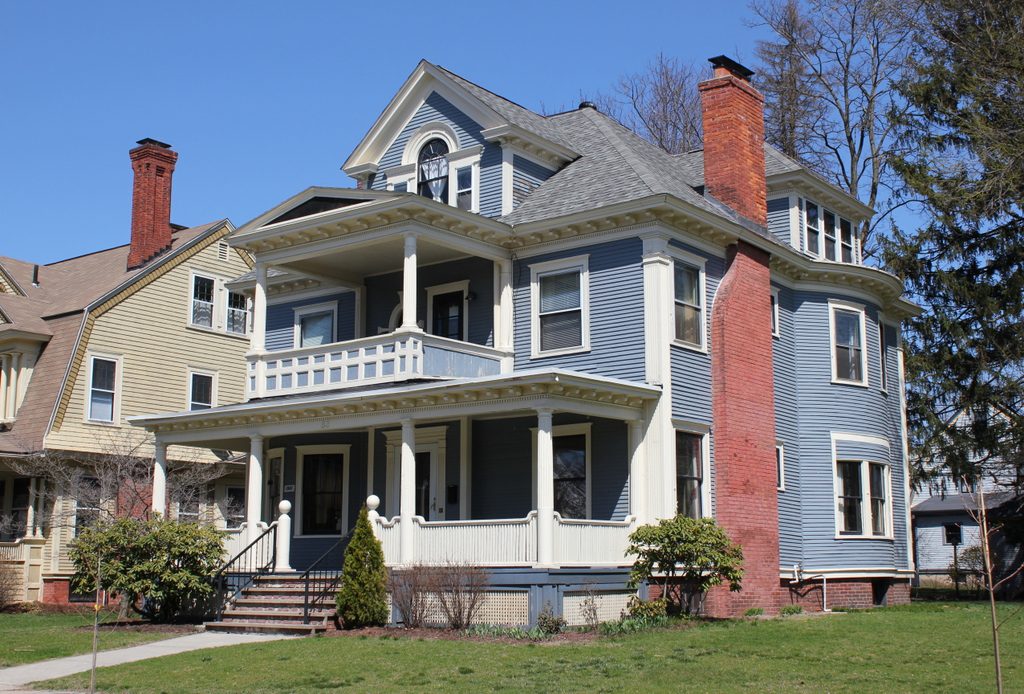 This house was among the many elegant Colonial Revival-style homes that were constructed in Springfield’s Forest Park neighborhood at the turn of the 20th century. It was built in 1901, and its original owner was Henry D. Williams, a superintendent for the American Writing Paper Company. He and his wife Mary had three sons, Roy, Howard, and Fay. All three graduated from M.I.T. in the early 1910s, and both Howard and Fay went on to serve in World War I. Mary died in 1913 at the age of 49, from complications after surgery to remove a tumor. Henry remarried a few years later, and around the same time he sold this house and moved to Holyoke, where he died in 1919.

By the 1920 census, this house was owned by Robert  Studley, a contractor who was living here with his wife Amy and their three children. However, Robert died the following year, when he was in his early 40s, and by the next census Amy and the children were renting a house elsewhere in the Forest Park neighborhood. In the meantime, this house was sold to Harry A. Sawyer, an insurance agent who worked as the Springfield branch manager for the Automobile Insurance Company of Hartford. During the 1930 census, he was living here along with his wife Grace and their three children, but they sold the house three years later.

The next owners of the house were Albert and Ruth Shaw. Albert was also involved in the insurance industry, working as a financial secretary for Massachusetts Mutual. They were still living here when the first photo was taken, along with their two sons, Lewis and Richard, as well as a servant. Since then, the exterior of the house has hardly changed, and like the rest of the neighborhood it remains well-preserved. It is now part of the Forest Park Heights Historic District, which was added to the National Register of Historic Places in 1982.

The house at 63 Magnolia Terrace in Springfield, around 1938-1939. Image courtesy of the Springfield Preservation Trust. 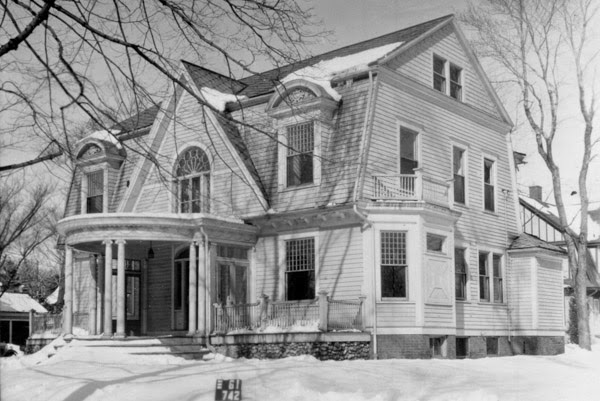 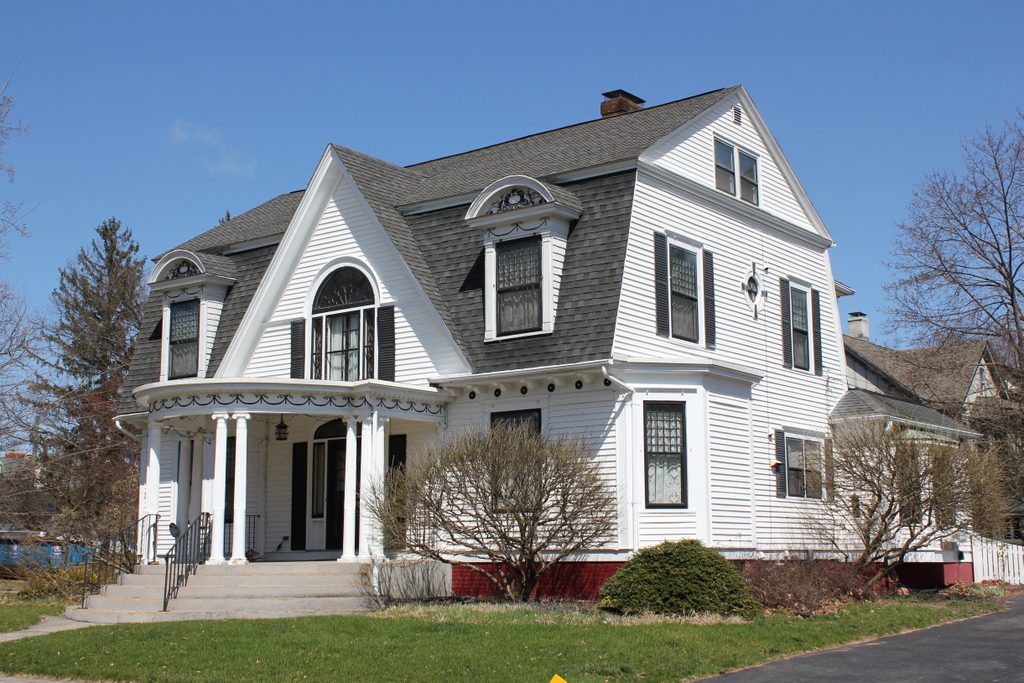 This house was built in 1895 for Minerva Thrall, a widow who moved in here along with her three adult step-daughters, Emily, Minnie, and Nellie. Minerva’s husband was Henry Thrall, a tanner and woolen goods merchant from Stafford Springs. He had originally married Minerva’s sister Emeline in 1841, and they had six daughters, two of whom died in infancy. Emeline died in 1860, two weeks after the birth of their last child, and Henry remarried to Minerva a year later. She was also a widow whose first husband, Dr. Oliver Tuthill, died in 1857 after just three years of marriage.

Of Henry’s surviving daughters, three of them never married, and after his death in 1880 they continued to live with Minerva, eventually coming to Springfield with her when this house was built. Minnie died in 1901 at the age of 48, from “paralysis of the heart,” and after Minerva’s death in 1917 the other two sisters inherited the house and lived here for the rest of their lives. Nellie died in 1934, and Emily in 1938, around the same time that the first photo was taken.

Like most of the other historic homes along Magnolia Terrace, this house has remained well-preserved, with hardly any differences in the past 80 years since the first photo was taken. Today, this street is one of the centerpieces of the Forest Park Heights Historic District, which was added to the National Register of Historic Places in 1982.

The house at 43 Magnolia Terrace in Springfield, around 1938-1939. Image courtesy of the Springfield Preservation Trust. 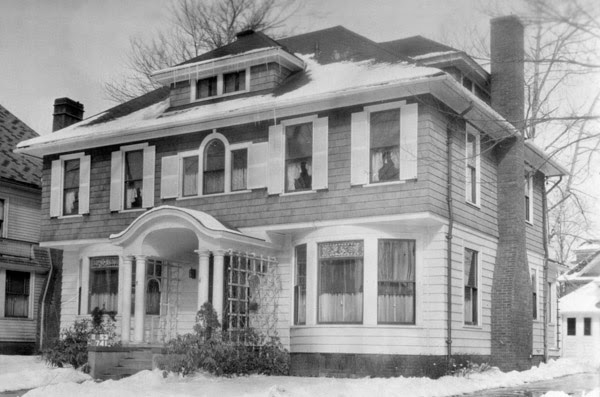 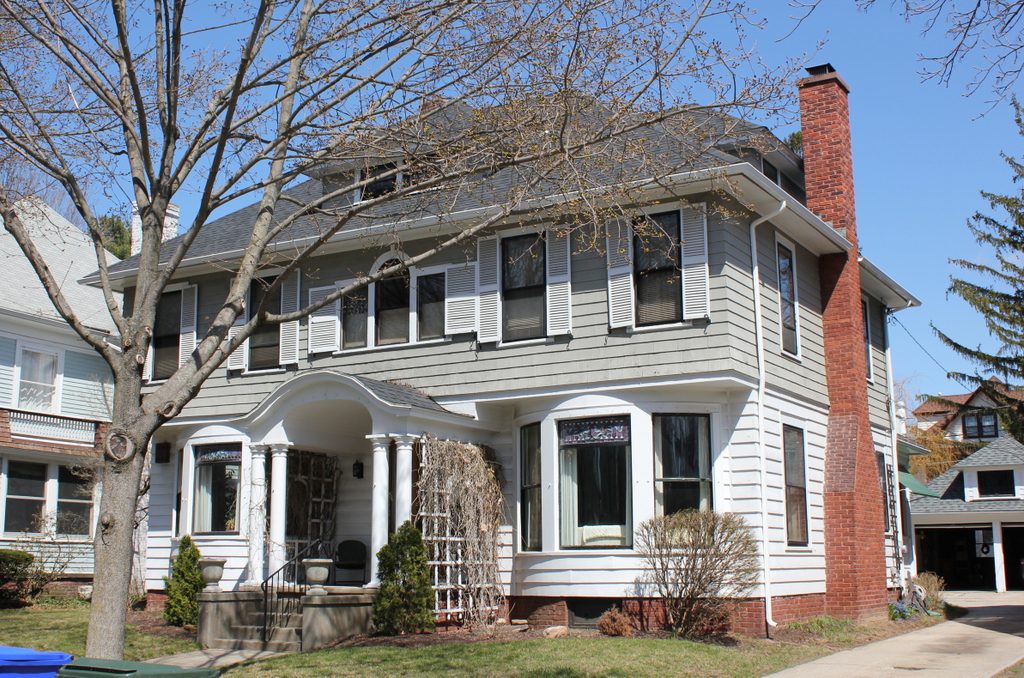 Completed in 1925, this house was among the last to be built in this section of Springfield’s Forest Park neighborhood, with most of the other homes dating back to the turn of the 20th century. It was originally the home of Frederick B. Taylor, a merchant who sold doors, windows, blinds, paint, and other such building materials from his shop on Market Street. By the time Taylor moved into this house, he and his wife Eliza were in their 60s, and he only lived here for a few years, until his death in 1929.

Later in 1929, Eliza moved to Longmeadow to live with her daughter, and she sold this house to George and Kathryn Clark, who moved in here along with their three children. At the time, George was the vice president of Springfield’s Third National Bank, and he later went on to become the bank’s president. His wealth was reflected in the 1940 census, which was done only a year or two after the first photo was taken. The house was valued at $16,000, which was a considerable sum at the time, and George’s income was listed as being over $5,000, which was the highest bracket that the census recorded.

After George’s death in 1949, Kathryn continued to live here for nearly a half century longer, until she finally sold the property in 1987. Since then, the house has remained well-preserved, with an exterior appearance that is essentially unchanged from when the Clarks lived here. Along with the other homes in the neighborhood, the property is now part of the Forest Park Heights Historic District on the National Register of Historic Places.

The house at 37 Magnolia Terrace in Springfield, around 1938-1939. Image courtesy of the Springfield Preservation Trust. 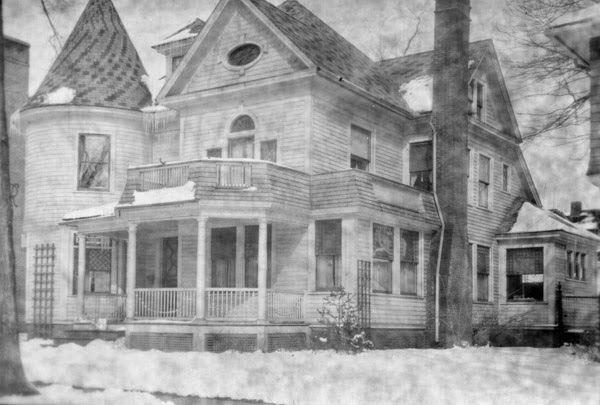 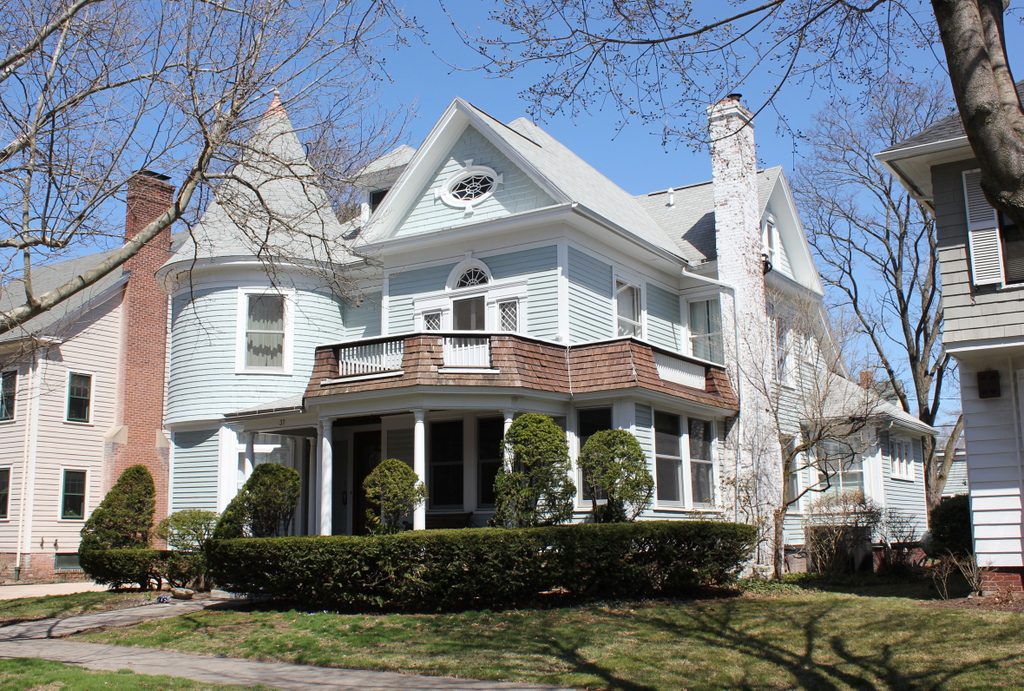 This house was built in 1895 for Fred R. Brown, a wholesale grocer who ran a successful business here in Springfield for many years. He and his wife Isabella were in their mid-20s when they moved into the house, and they went on to raise two daughters here, Dorcas and Kathleen. They lived here for about 35 years, before selling the house around 1930 to Fred Stephenson. According to the census records, he was an executive manager for the Community Chest, a fundraising organization that was a predecessor to the United Way. He was still living here when the first photo was taken in the late 1930s, along with his wife Mary and their two children.

Today, Magnolia Terrace is a centerpiece of the Forest Park neighborhood, with historic late 19th and early 20th century homes lining both sides of the street. Like most of the other houses, this one has been well-preserved, with no noticeable exterior differences between the two photos, and in 1982 the entire surrounding neighborhood became part of the Forest Park Heights Historic District on the National Register of Historic Places.

The house at 1891 Main Street in South Windsor, around 1935-1942. Image courtesy of the Connecticut State Library. 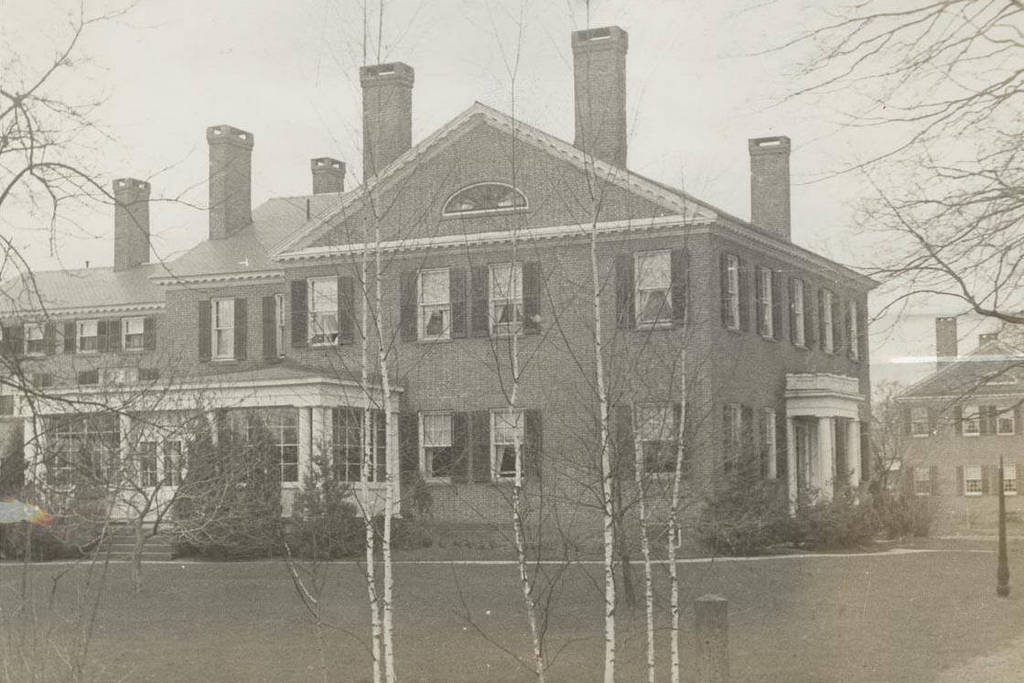 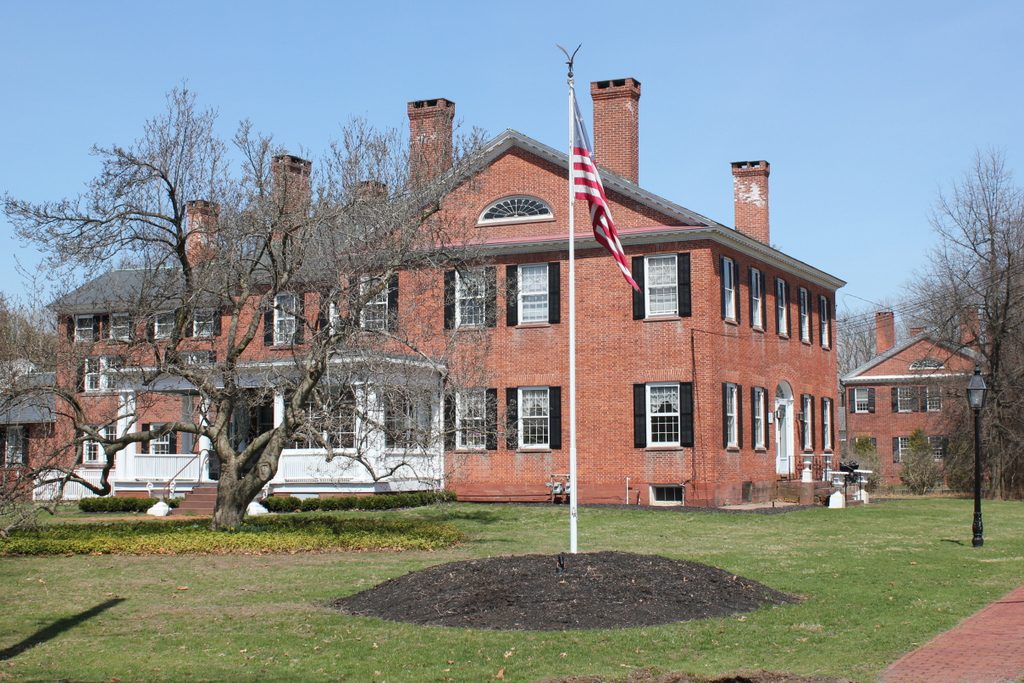 Aaron Bissell, Jr. was a leading resident of East Windsor at the turn of the 19th century. At the time, the town included all of present-day South Windsor, and Bissell operated a tavern here in the village of East Windsor Hill. The tavern, which is no longer standing, was located just south of where these photos were taken, at the corner of Main Street and Ferry Lane. Along with running the tavern, Bissell was also involved in the local government, serving as town clerk from 1799 to 1825, as well as several terms in the state legislature.

In 1812, a few years after his daughter Sophia’s marriage to Eli Haskell, Bissell built the couple an elegant brick house, which is seen in the distant right of both photos. A year later, he built a nearly identical house for himself, which is seen here in the foreground. Both houses are excellent examples of Federal-style architecture, and they are built of brick, which was far less common than wood-frame homes during this era. The main front sections of the two homes are virtually identical, but additions over the years have changed the appearance of the rear of the houses.

Bissell lived here in this house until his death in 1834, and the property was then purchased by Increase Clapp, a blacksmith. He lived here for the next 25 years, until his death in 1859, and his son Carlos then inherited the house. By around the turn of the 20th century, the house was owned by Lewis Sperry, a lawyer and politician who served two terms in Congress, representing Connecticut’s first district in the U. S. House of Representatives from 1891 to 1895.

The first photo was taken about 15 years after Sperry’s death, and almost nothing has changed since then, except for the removal of the front porch. Both this house and the neighboring Haskell House are well-preserved, and they are two of the many fine 18th and early 19th century homes that line South Windsor’s Main Street. In 1986, both of these homes, along with the rest of he surrounding neighborhood, became part of the East Windsor Hill Historic District on the National Register of Historic Places.