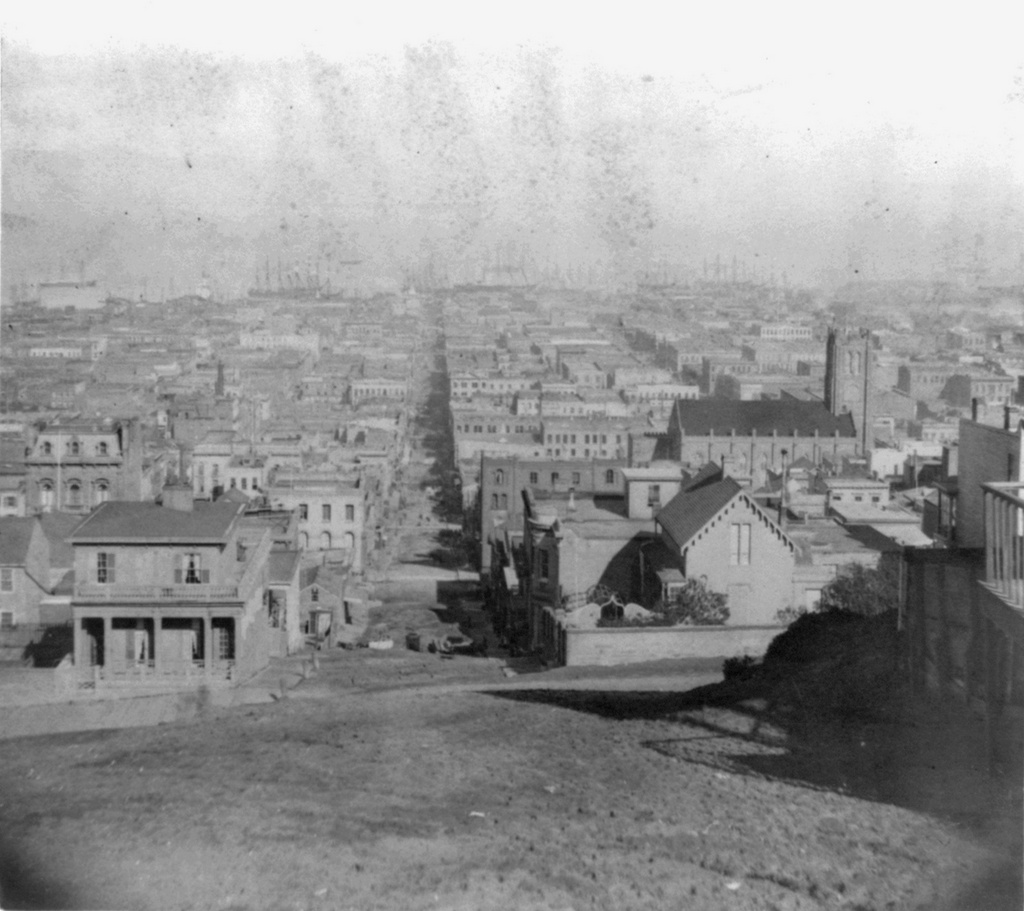 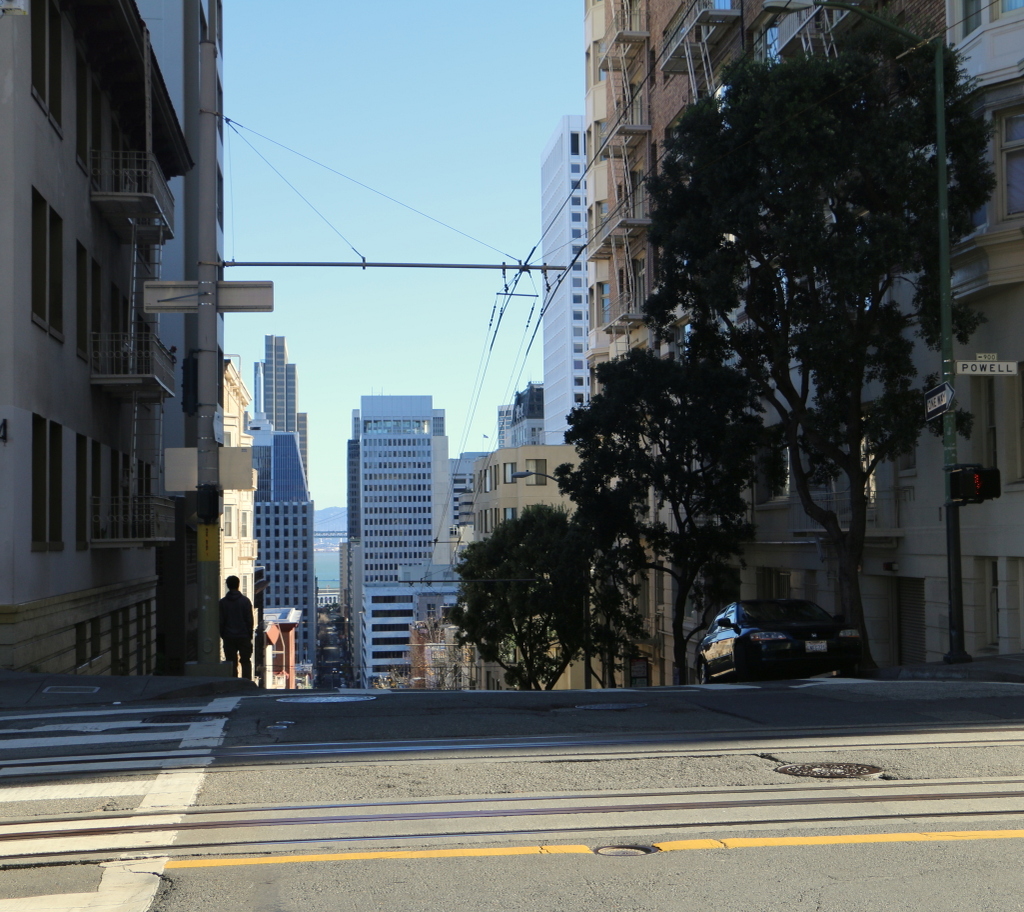 Looking north on Powell Street from the corner of California Street in San Francisco, around 1866. Image courtesy of the Library of Congress, Lawrence & Houseworth Collection. 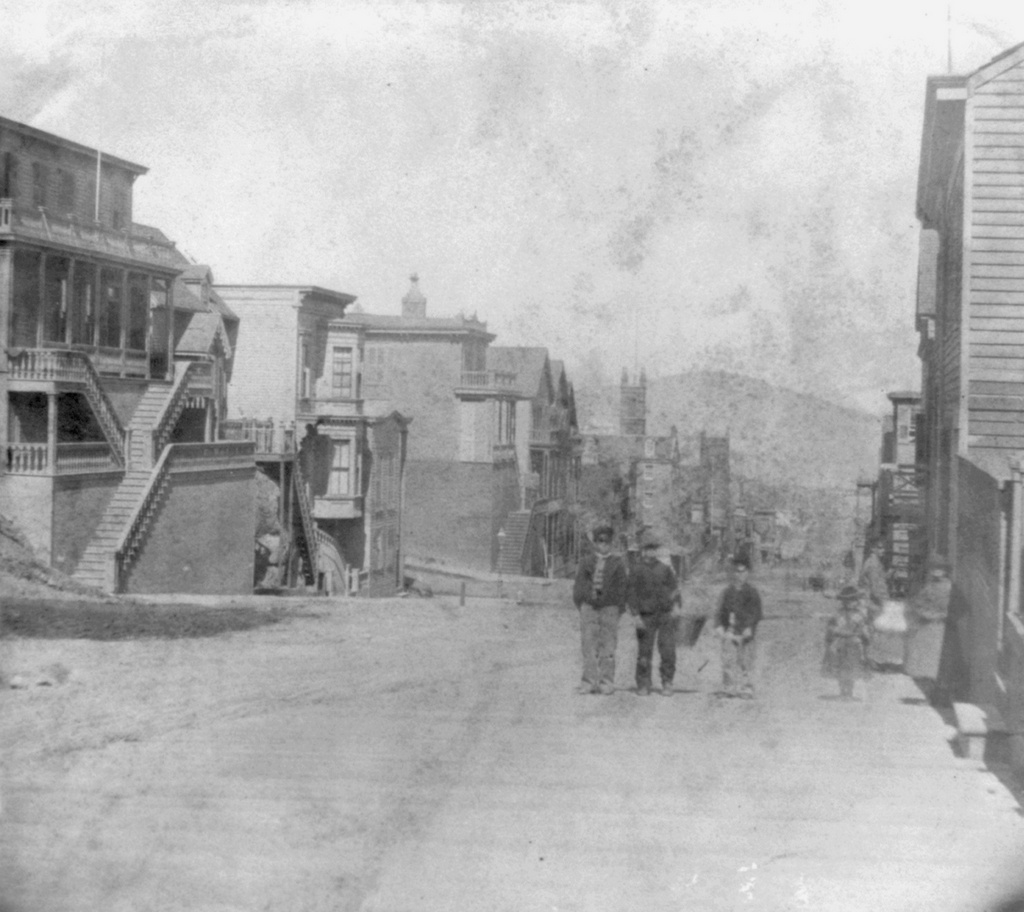 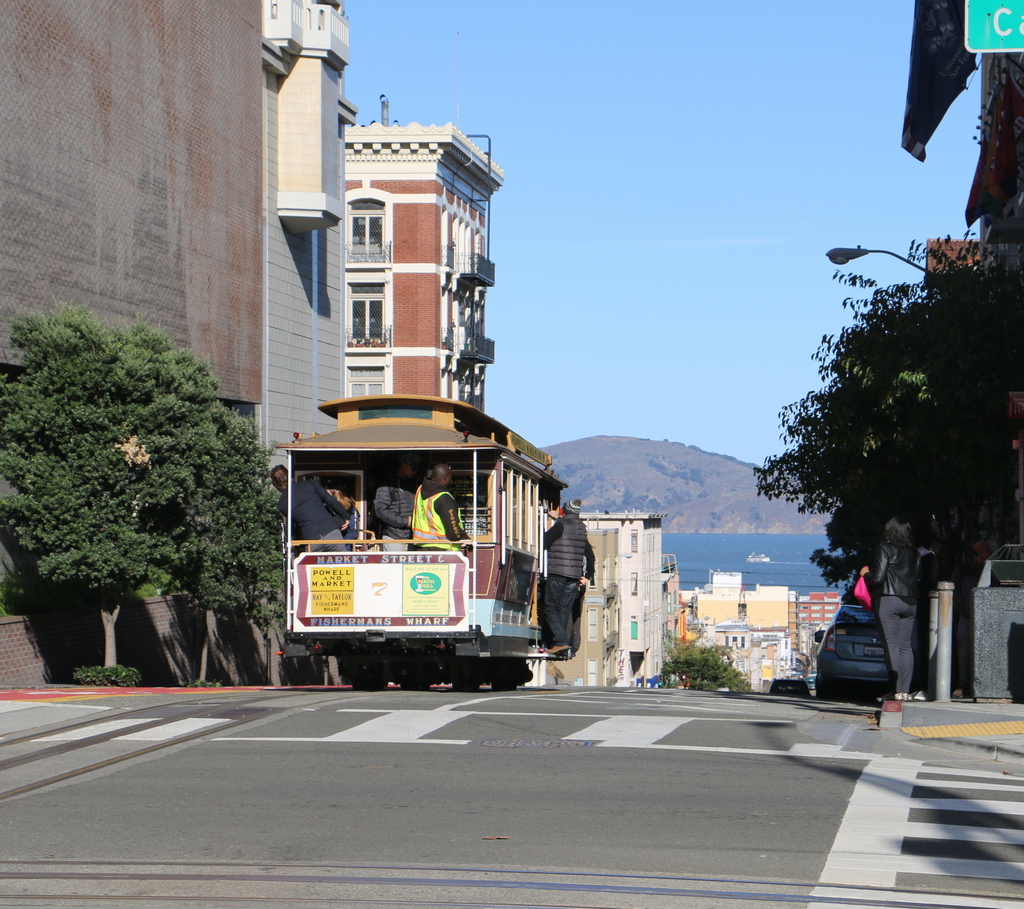 The image of a cable car descending a steep hill, with San Francisco and the bay visible in the distance, is what many people picture when they think of San Francisco, and although it wasn’t deliberate on my part, that is exactly what the present-day scene shows. However, the first photo shows a very different scene along Powell Street. At the time, San Francisco was still very much a “wild west” kind of city, and the Nob Hill area here had not yet developed into the wealthy neighborhood that it would soon become. The cable car system was also still several years away, so at the time the only way up the steep streets to Nob Hill was by horse or, as the young boys in the photo chose to do, by walking.

Any buildings from the first photo that would have still been standing 40 years later would have been destroyed in the 1906 earthquake, when fires spread across this entire area. Aside from the nearby Flood Mansion, all of the Victorian-era mansions on Nob Hill burned down, and the only other surviving building in the area was the Fairmont Hotel, located just to the left of this scene. However, like the rest of the city, the neighborhood was rebuilt, and today it remains one of the city’s most expensive areas, thanks to its commanding views and proximity to the center of San Francisco.

Facing northeast from the corner of California and Powell Streets in San Francisco, around 1866. Image courtesy of the Library of Congress, Lawrence & Houseworth Collection. 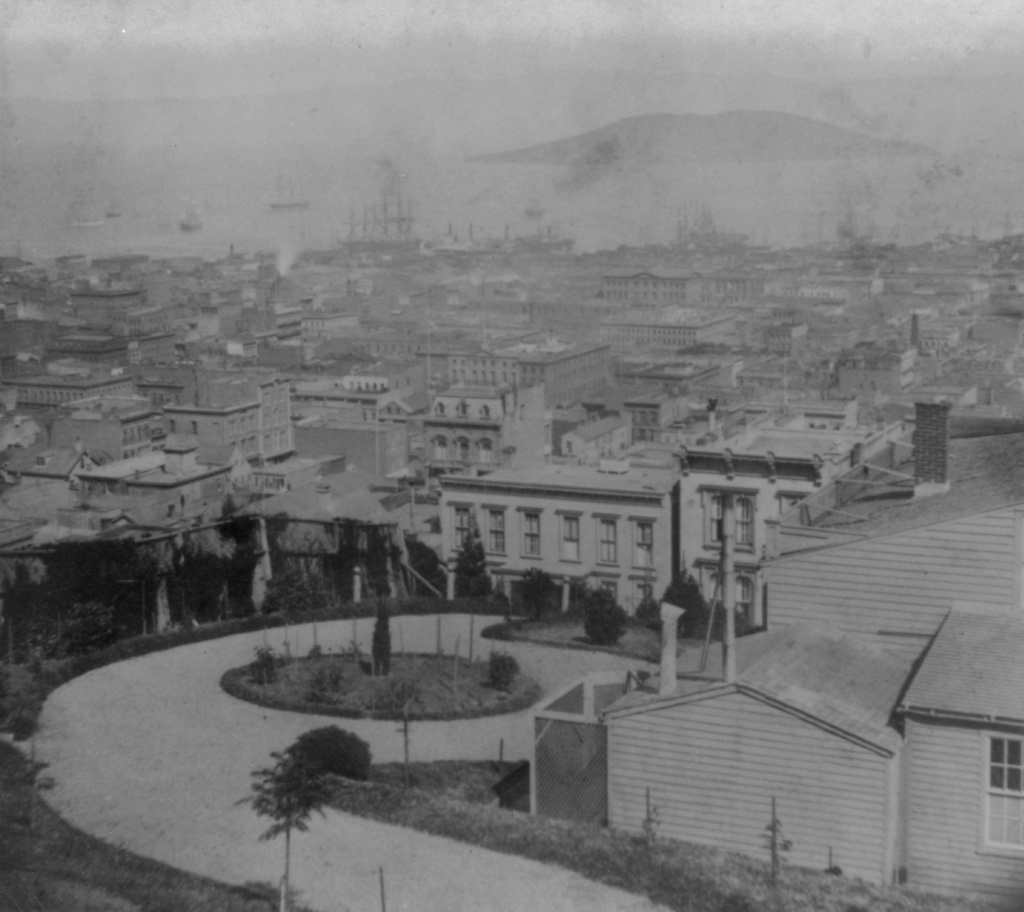 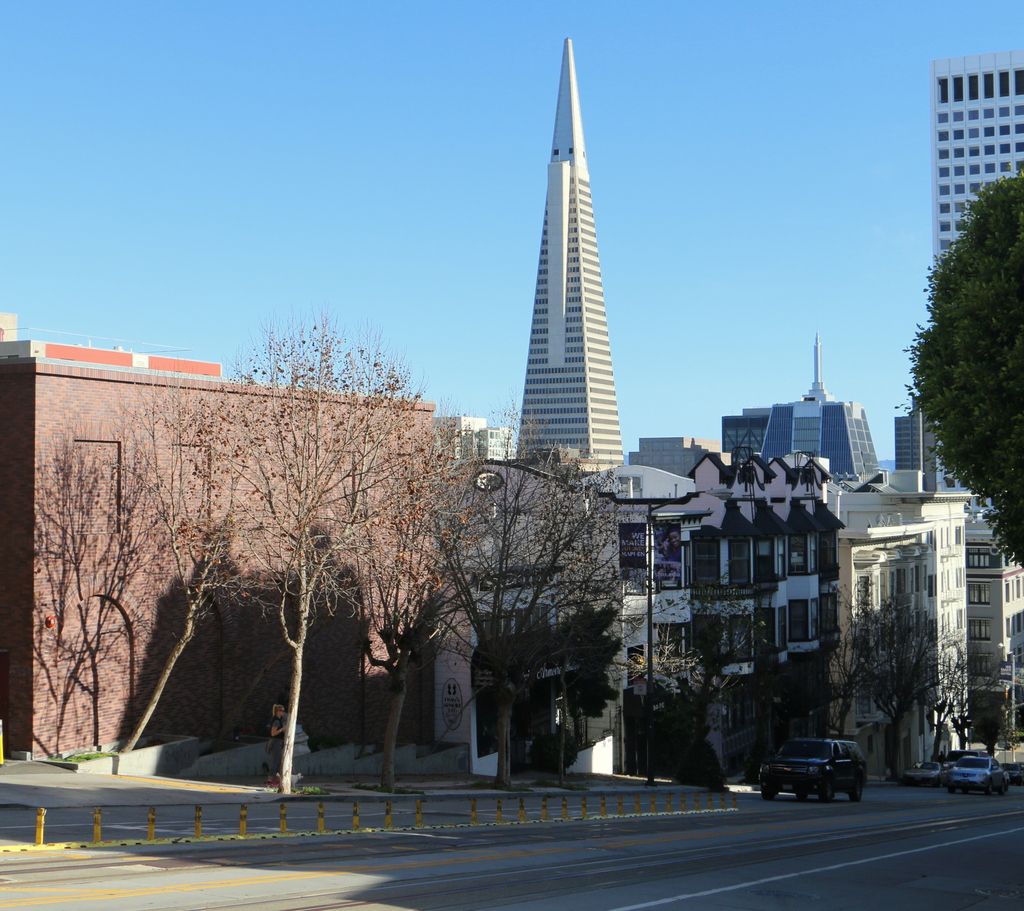 Like the view in the previous post, these photos show San Francisco as it appeared in its early years. It had experienced rapid growth during the Gold Rush, and less than 20 years later in the 1860s it was becoming a major city and port on the west coast. The first photo shows the present-day Jackson Square, Portsmouth Square, and Financial District areas, with San Francisco Bay and Yerba Buena Island in the distance. There are a number of ships in the bay or at the wharves, which were likely arriving from or departing for ports around the world. At the time, the city was largely dependent on ships. The Transcontinental Railroad would not be completed for three more years, and the Panama Canal was still almost 50 years away, so the most economical trading route from San Francisco to New York and other east coast ports was the two month, 13,000 mile journey around the southern tip of South America.

Within a few years after the first photo was taken, San Francisco’s population reached 150,000, which was an astonishing 15,000% increase from just 20 years earlier. In the years that followed, the growth continued, and by the time the 1906 earthquake struck, the population was around 400,000. Many of the buildings in the first photo were likely still standing in 1906, but this entire area was destroyed by the fires that were started by the earthquake. At least one building in this view did survive, though. The Montgomery Block, visible just above and to the right of the center, was built in 1853 and stood at the corner of Montgomery and Washington Streets until 1959, when it was demolished and replaced with a parking lot.

Today, development in downtown San Francisco has completely blocked the view of the bay from here. The most prominent building in this view is the Transamerica Pyramid, which was completed in 1972 on the site of the Montgomery Block. It remains the city’s tallest building, and its pyramid shape is instantly recognizable in the San Francisco skyline.

The view looking east from the top of Russian Hill, looking down Vallejo Street and facing San Francisco Bay, around 1866. Image courtesy of the Library of Congress, Lawrence & Houseworth Collection. 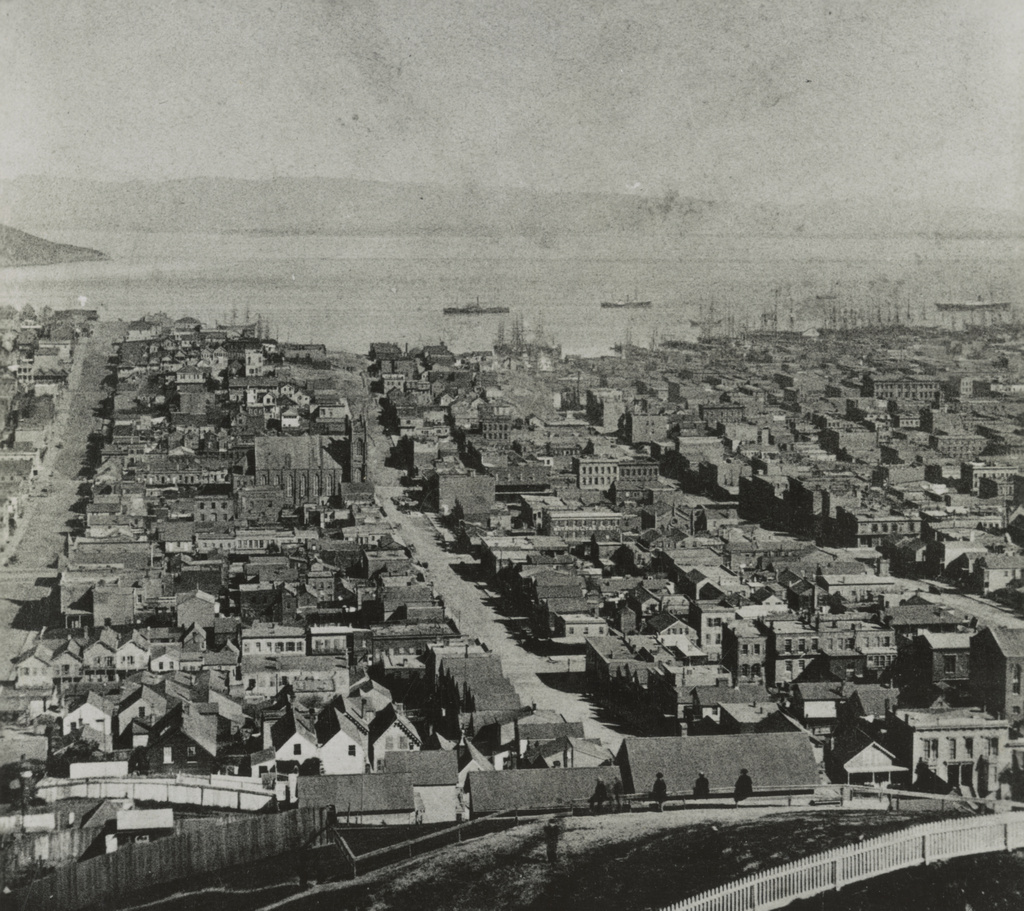 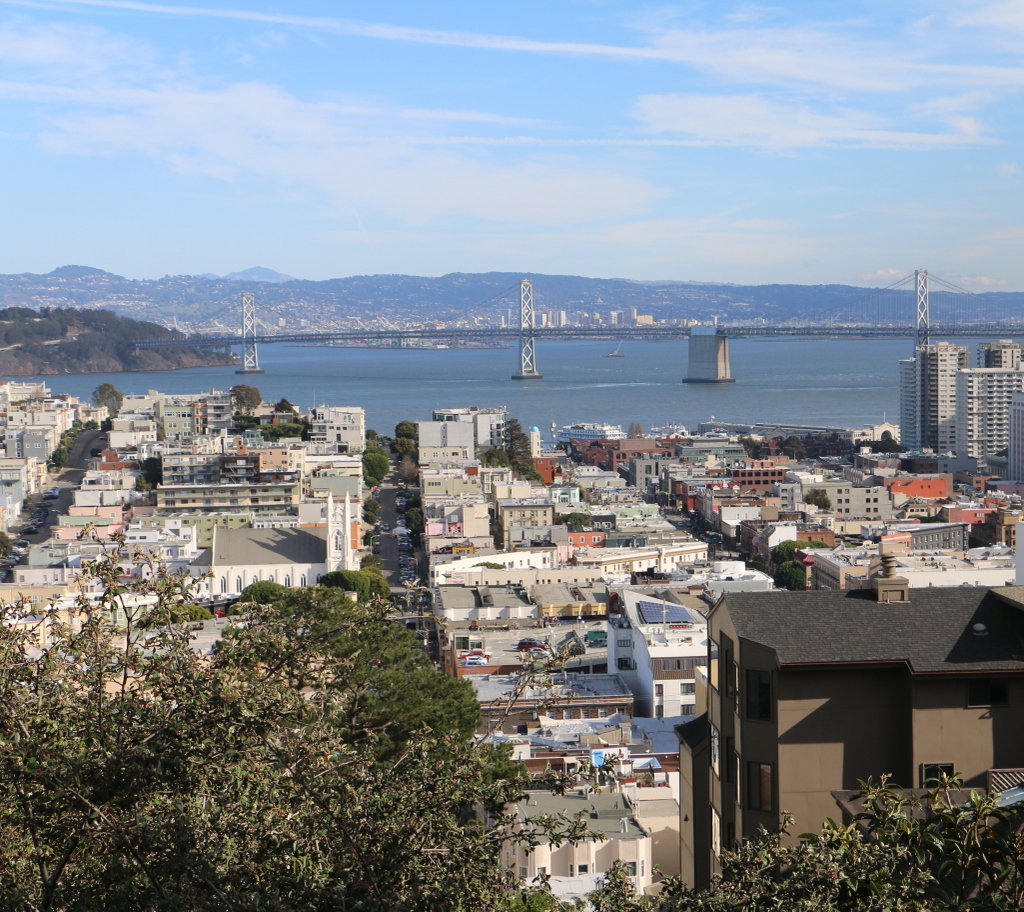 It was hard to get to the exact location of the original image, because most of Russian Hill is now covered in buildings. However, this view from the top of Vallejo Street just east of Jones Street was pretty close. The first photo was taken in the early years of San Francisco’s history, when the city was in the midst of a rapid population boom. By the mid-1860s, the initial Gold Rush was over, but the city continued its dramatic growth, increasing from about a thousand in 1848 to nearly sixty thousand in 1860. By 1870, the population was nearly triple that, and the section of the North Beach neighborhood seen here was completely developed.

The three streets in this view are, from left to right, Green Street, Vallejo Street, and Broadway Street. At the time, the area to the right of Broadway Street was part of the city’s infamous “Barbary Coast” – a red light district that attracted miners and sailors with drinking, gambling, prostitution, and entertainment. This continued until 40 years after the first photo was taken, when the entire area was destroyed by the 1906 earthquake and the fires that followed.

Today, the only identifiable building remaining from the first photo is the Saint Francis of Assisi Church, on the left side of Vallejo Street at the corner of Columbus Avenue. It was built in 1860, and although the fires in 1906 gutted the building, the brick walls and towers remained standing. The interior was rebuilt and rededicated in 1919, and today it is the National Shrine of Saint Francis of Assisi.

Remarkably, though, despite all of the changes to the neighborhood, the church still stands out as a major landmark. Unlike the nearby Financial District to the right, the development in this area is still largely two and three story buildings, so the view really doesn’t look dramatically different from 150 years ago. The one major change, of course, is the Bay Bridge in the distance, which was completed in 1936, connecting San Francisco to Yerba Buena Island on the left and Oakland on the other side of the bay. 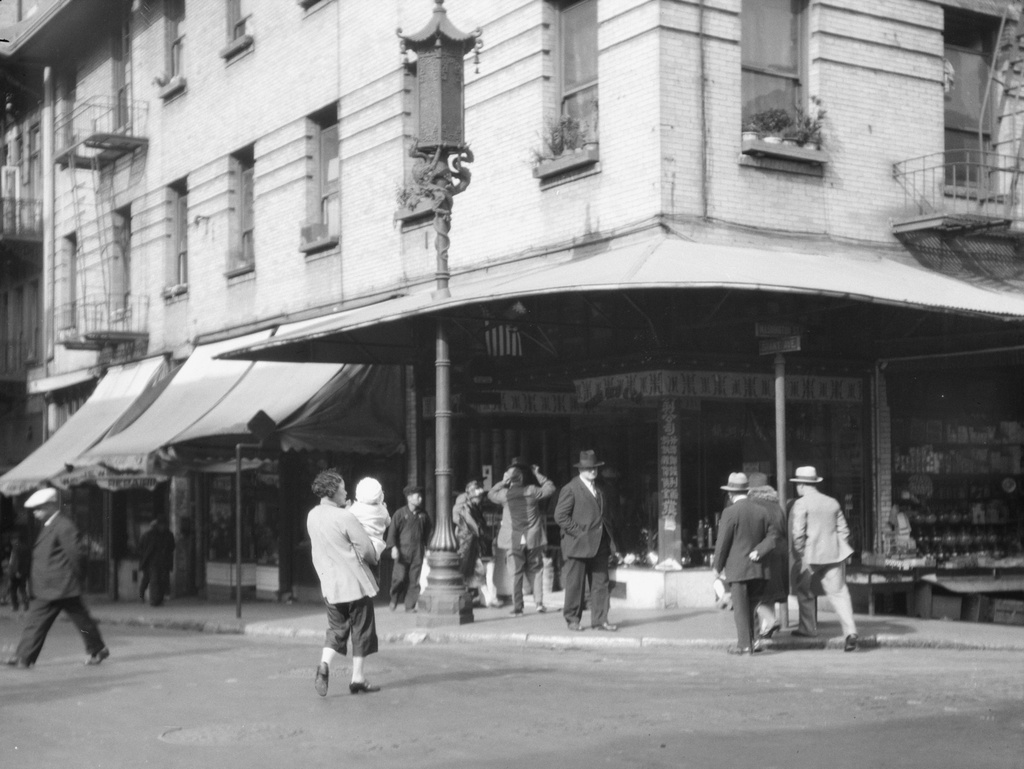 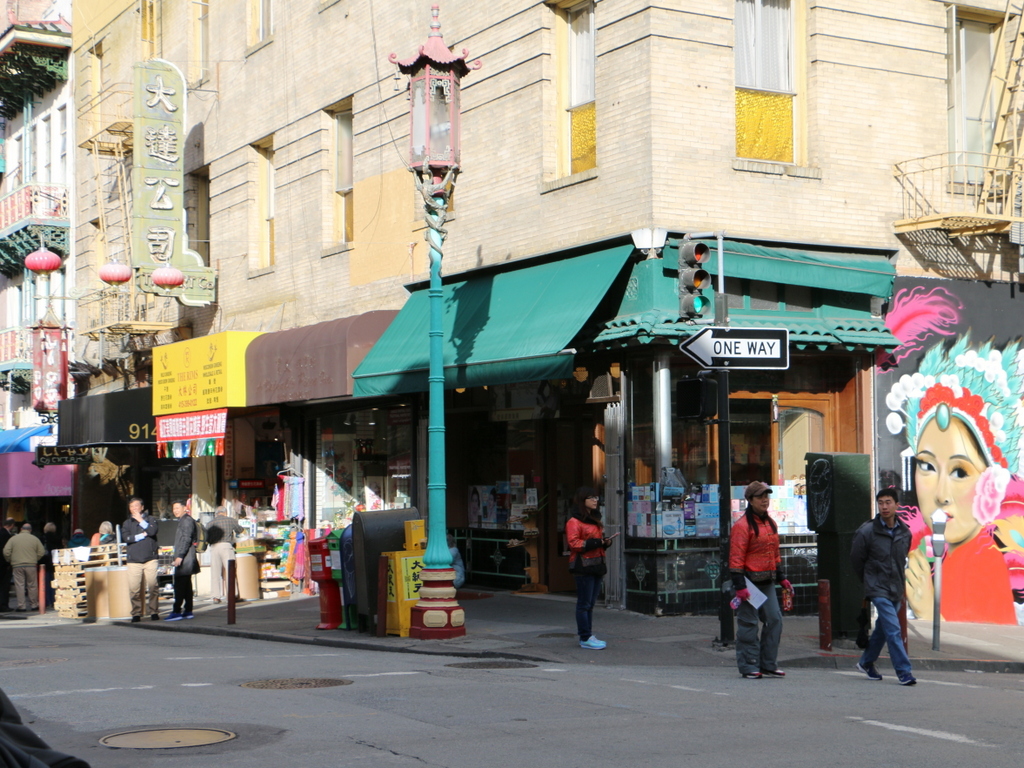 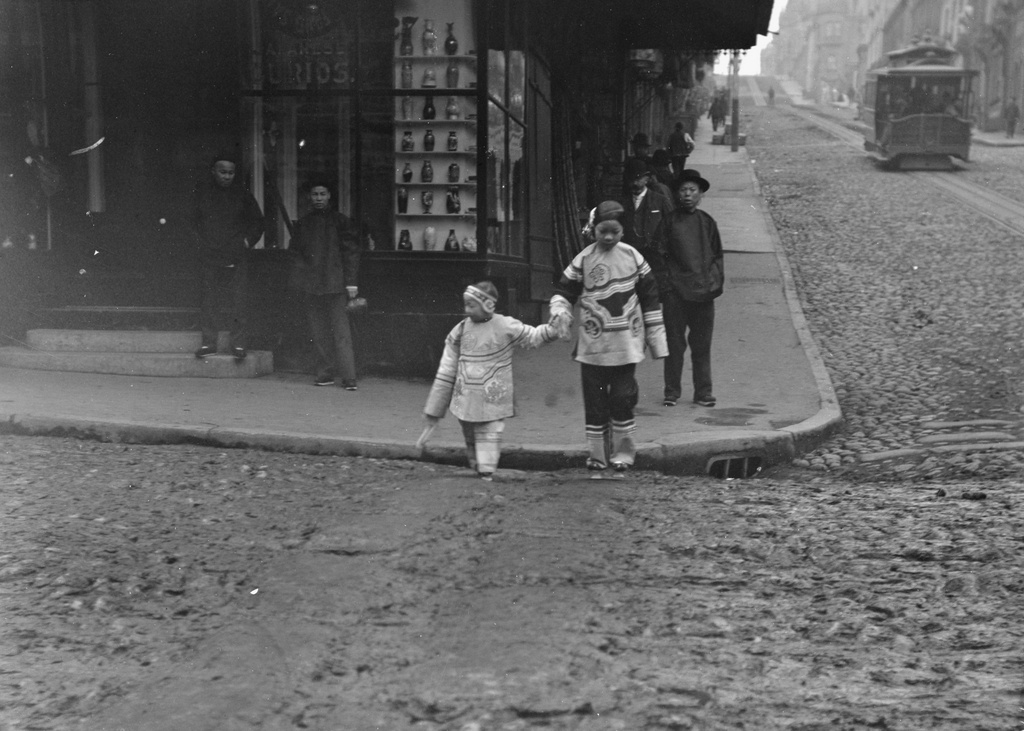 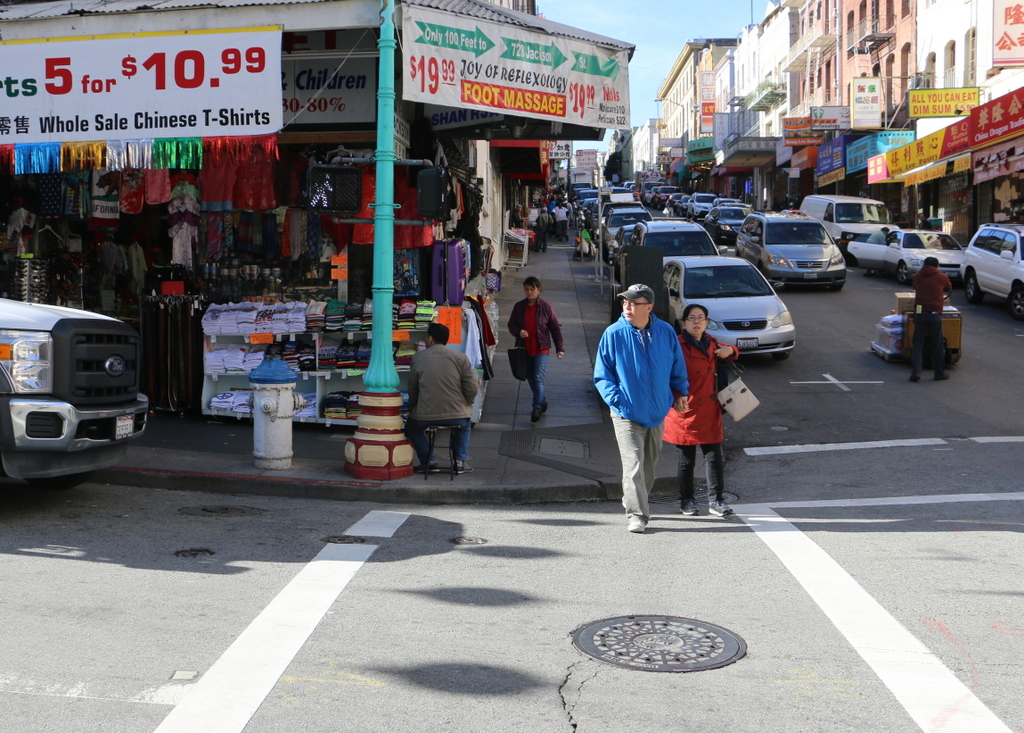