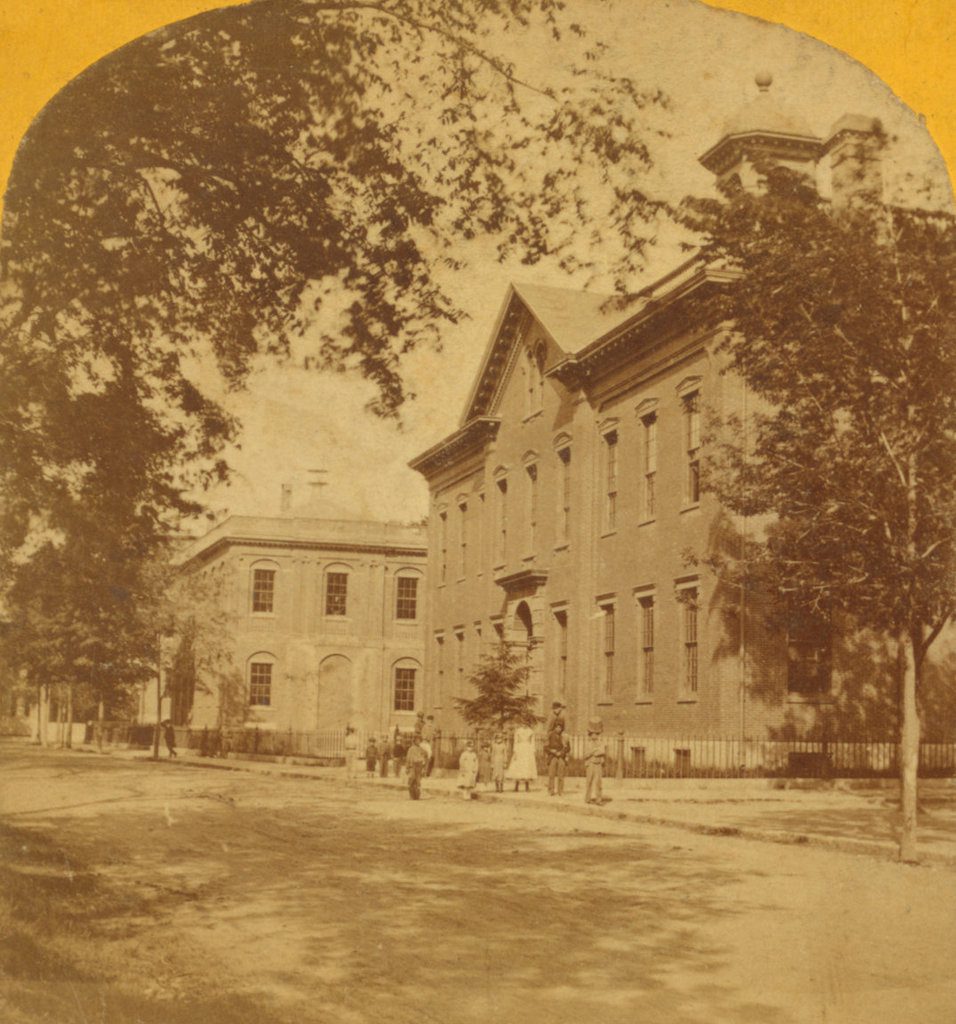 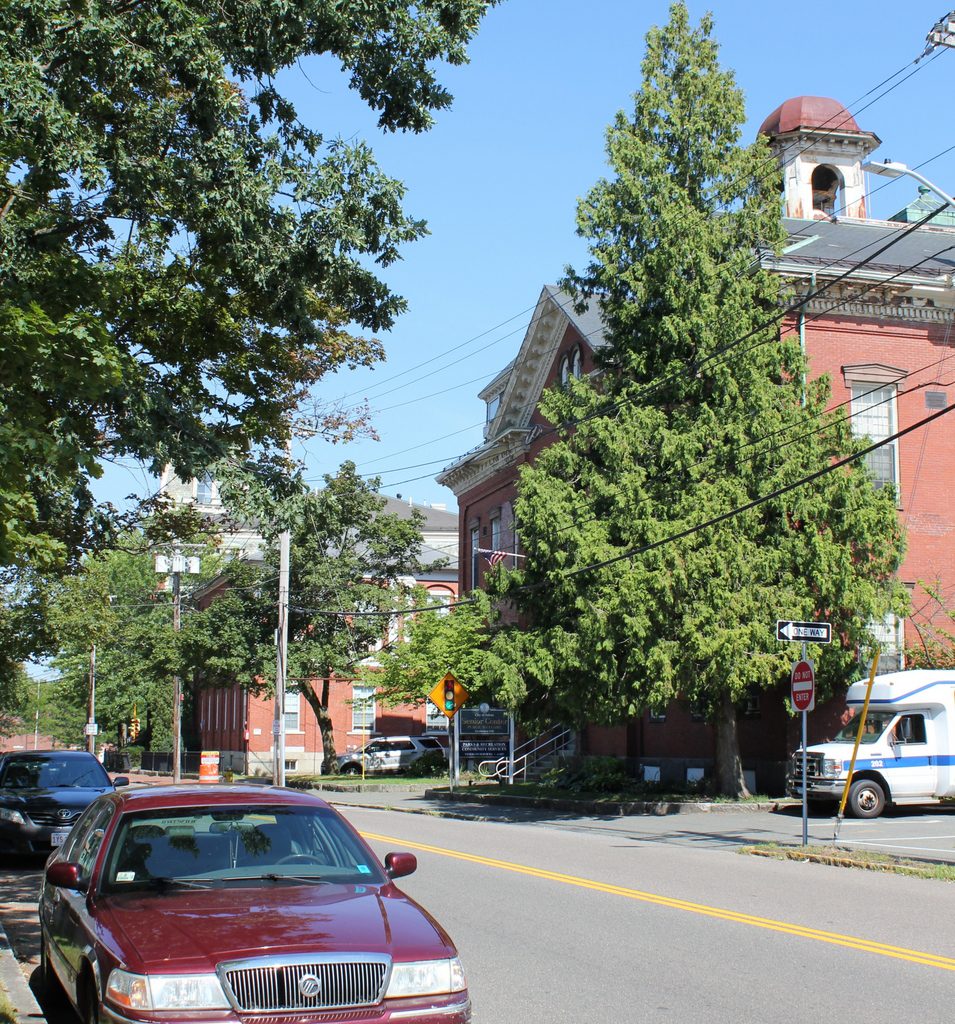 The Essex Institute buildings at 132 and 134 Essex Street in Salem, around 1910-1920. Image courtesy of the Library of Congress, Detroit Publishing Company Collection. 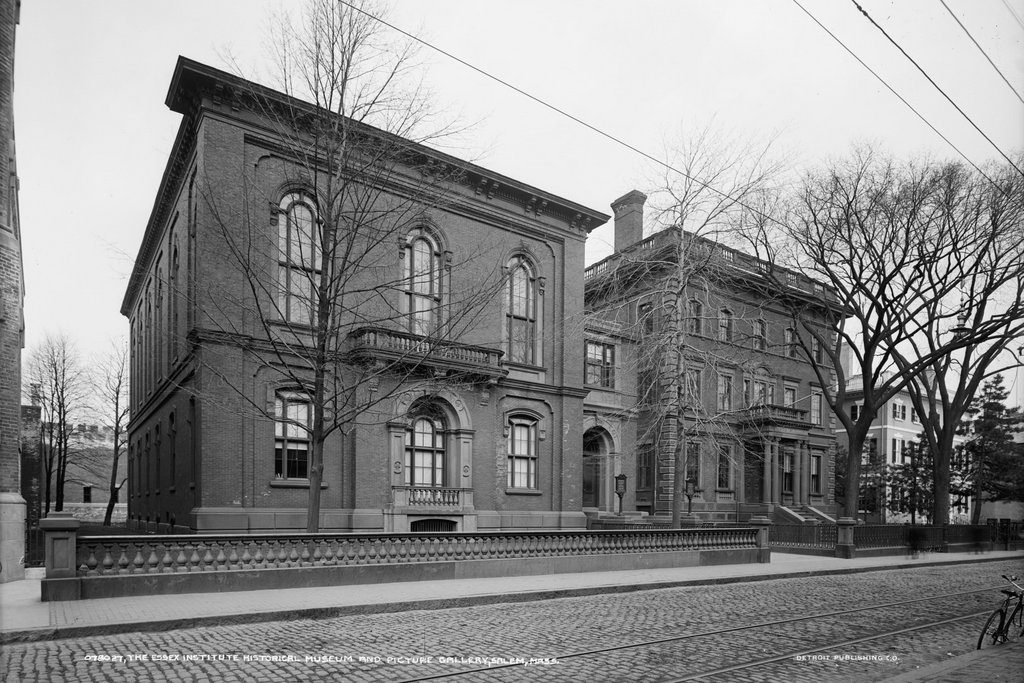 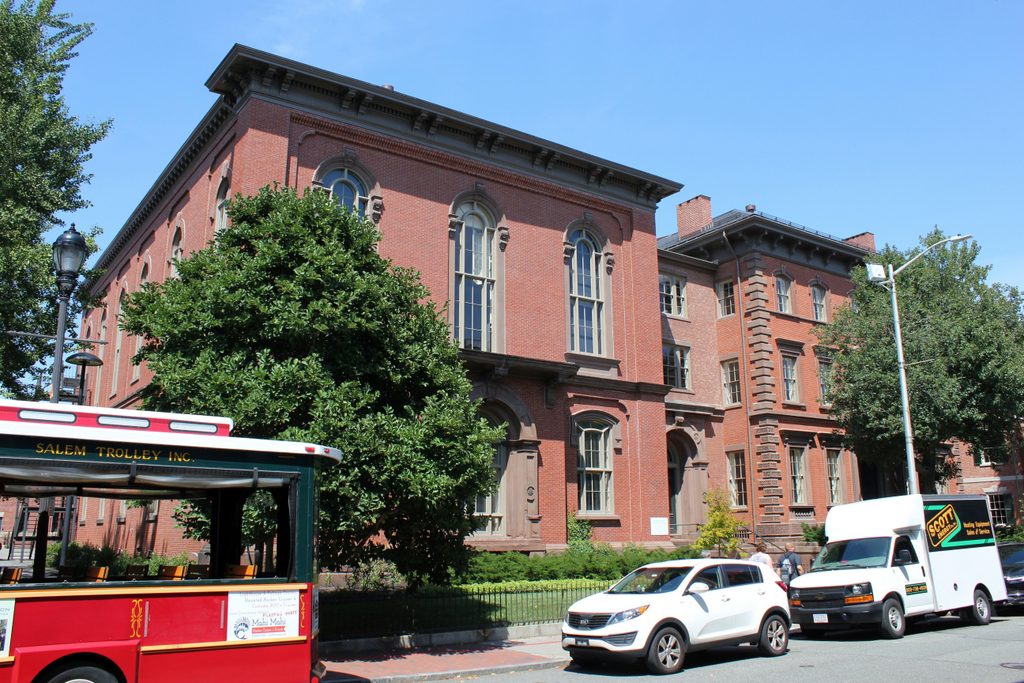 These two historic Italianate-style buildings were built a few years apart, and for different purposes, but later became home of the Essex Institute and were united into a single building. The older of the two sections, on the right side of the scene, was built in 1851-1852 as the home of merchant John Tucker Daland. It was designed by noted Boston architect Gridley J. F. Bryant, who would later go on to design the old Boston City Hall, and was among the finest homes of this period in Salem. Its square, three-story design echoed the style of earlier Salem mansions, such as the Gardner-Pingree House on the far right side of the photo, but featured Italianate details such as quoins on the corners, bracketed eaves, and arched windows on the third floor.

The building on the left side, Plummer Hall, was built only a few years later, in 1856-1857. It was the work of local architect Enoch Fuller, and included many of the same design features as its neighbor to the right. The building was originally owned by the Salem Athenaeum, a private library that was located in the large space on the upper floor. The lower floor was used by the Essex Institute, which had been established less than a decade earlier in 1848 with the merger of Essex Historical Society and the Essex County Natural History Society. The organization later shifted its focus to regional history, and over the years it accumulated a large collection of books, documents, and artwork, while also holding regular events such as lectures, concerts, and art exhibitions here in the building.

John Tucker Daland died in 1858, and two years later his daughter Susan married physician Benjamin Cox, Jr. The couple lived here in this house, and had two children, Benjamin and Sarah. Dr. Cox was evidently a wealthy man, as shown by the family’s 1870 census listing, which values his real estate at $21,000 and his personal estate at $40,000, for a net worth that would be equivalent to about $1.2 million today. However, he died just a year later, at the age of 65, although the family continued to live here until 1885, when the house was transferred to the Essex Institute and converted into library and office space.

The Essex Institute also acquired ownership of Plummer Hall in 1906, when the Athenaeum relocated to a new building. A year later, the two buildings were joined by a small connector section, which can be seen a few years later in the first photo. The facility would be expanded several more times during the 20th century, including the addition of a five-story bookstack in the 1960s, but its exterior appearance from Essex Street has hardly changed since the first photo was taken. The only noticeable differences are the loss of the balustrades on the roof of the Daland House and on the porch of Plummer Hall, and the addition of a third story atop the connecter section.

Today, the property is owned by the Peabody Essex Museum, which was formed in 1992 by the merger of the Essex Institute with the nearby Peabody Museum of Salem. The museum also owns a number of historic houses in the area, including the adjacent Gardner-Pingree House, the John Ward House on the other side of the building, and the Andrew-Safford House around the corner on Washington Square West. All of these buildings are now part of the Essex Institute Historic District, which was added to the National Register of Historic Places in 1972.

The courthouses on Federal Street in Salem, around 1910. Image courtesy of the Library of Congress, Detroit Publishing Company Collection. 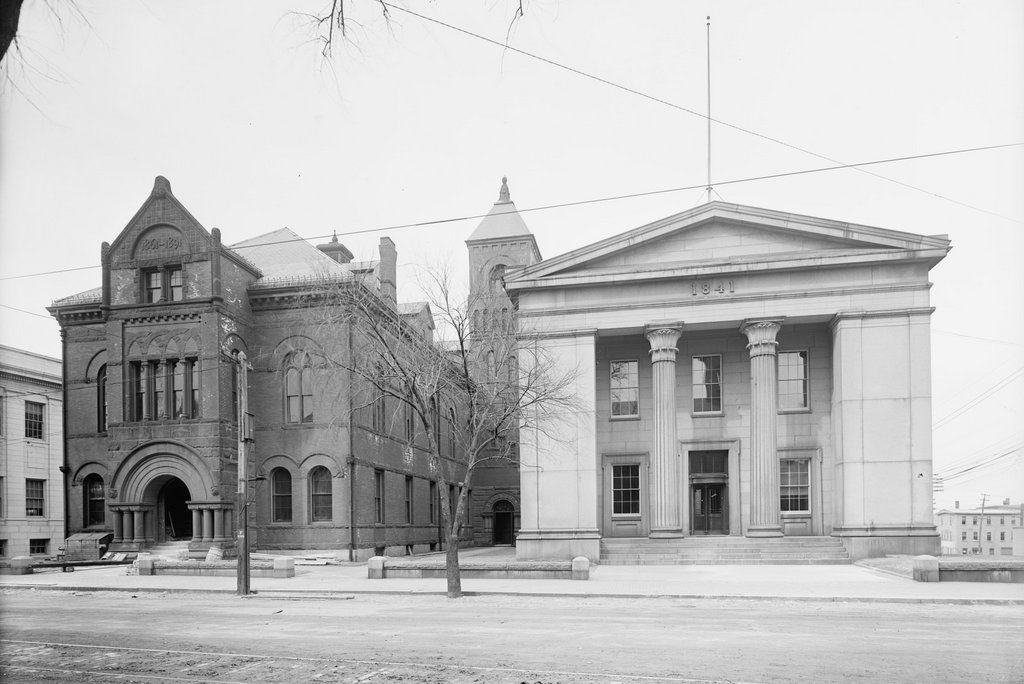 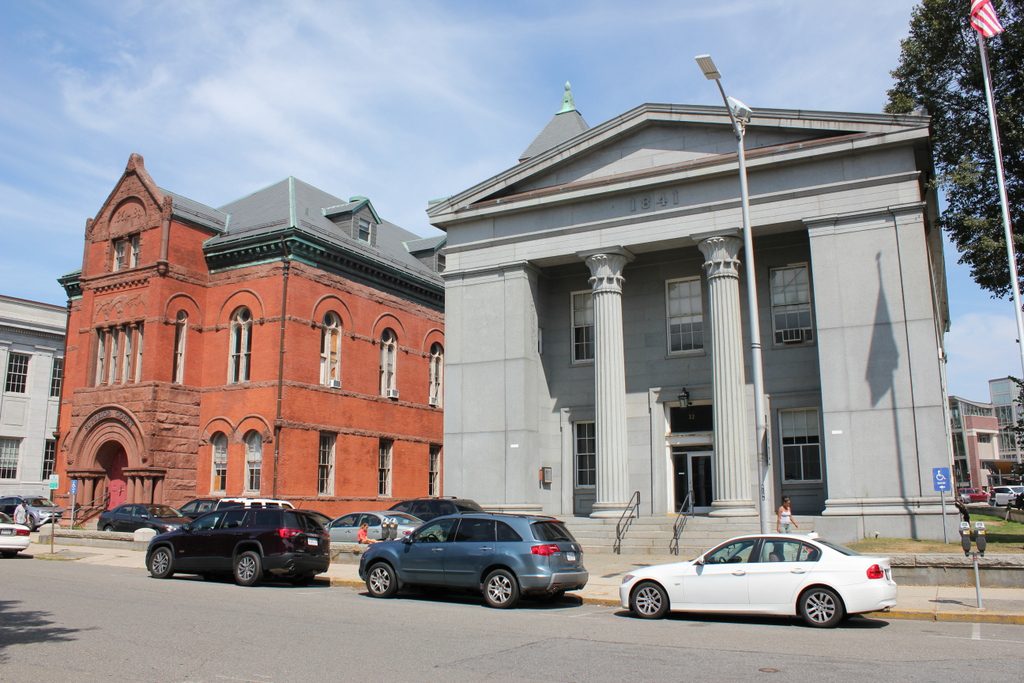 This block of Federal Street features four generations of Essex County courthouses, all lined up next to each other on the north side of the street. They represent a wide variety of architectural styles, and the two oldest are seen here in this view. The older of these is the granite, Greek Revival-style courthouse on the right side, which was completed in 1841. It was designed by noted architect Richard Bond, who was responsible for several other important buildings in Salem, including City Hall and the nearby Tabernacle Congregational Church. As built, the interior had a courtroom on the upper floor, with county offices on the lower floor, although this later changed as more courthouses were built here.

The second courthouse was built just 20 years later, but with architecture that sharply contrasts with that of its neighbor. Completed in 1862, it featured a brick exterior with an Italianate design, and was the work of architect Enoch Fuller. However, the exterior was heavily modified from 1887 to 1889, including a new wing on the rear of the building, a tower on the right side of this addition, and a new three-story entryway on the front of the building. Although similar to the original design of the courthouse, these additions had more of a Romanesque appearance, which gave the building an unusual blend of architectural styles.

The third courthouse is barely visible on the far left side of both photos. It was completed in 1909, shortly before the first photo was taken, and it has since been joined by a fourth courthouse on the other side of it, which opened in 2012. All four of the buildings are still standing, although the two oldest have been vacant since the new courthouse was completed. Neither have seen any significant exterior changes since the first photo was taken more than a century ago, and both are part of the Federal Street Historic District on the National Register of Historic Places. However, there are still no definite redevelopment plans for the buildings, and the 1841 courthouse was damaged by a fire in May 2018, less than a year after the second photo was taken.