The corner of Central Street and Madison Avenue in Springfield, with the Goodhue House in the distance, around 1905. Image from Springfield, Present and Prospective (1905). 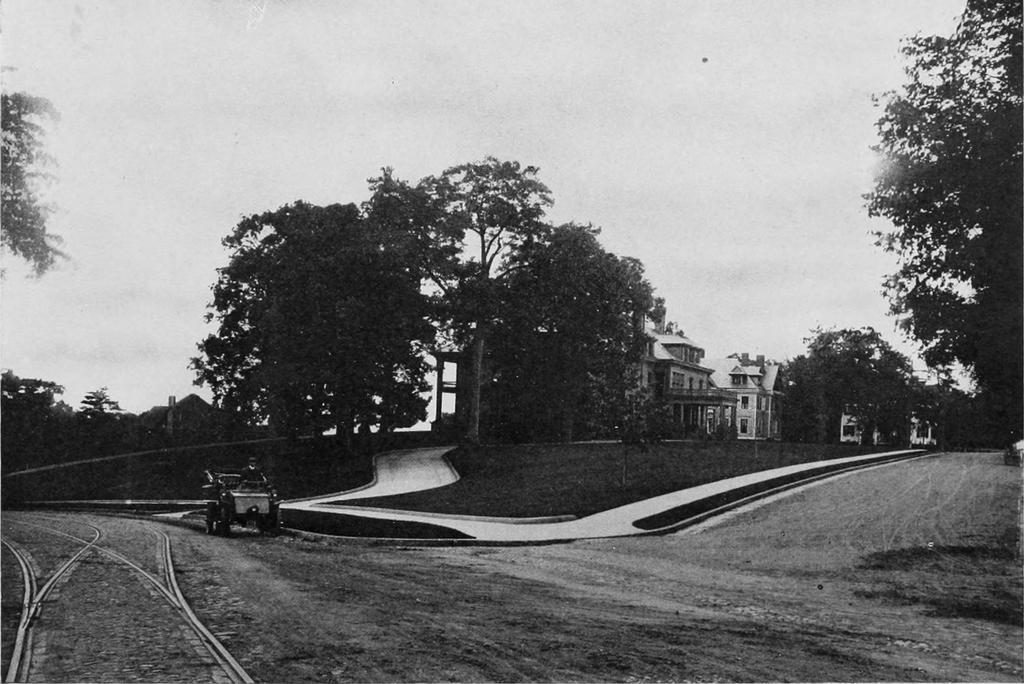 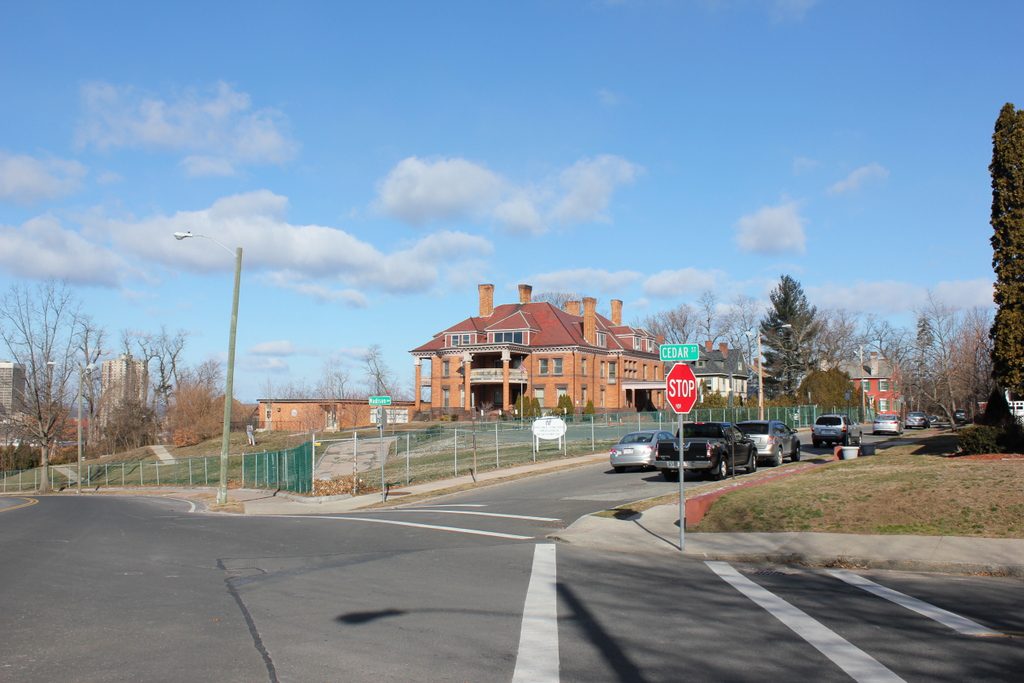 This neighborhood of Springfield, variously referred to as Maple Hill and Ames Hill, was the city’s most fashionable residential area of the city in the 19th century. Here on Central Street, this site was once the home of Henry Sterns, a merchant who built his house here in 1827. By the late 1860s, though, his property was subdivided and two new streets, Sterns Terrace and Madison Avenue, were built here. The old house was moved to the back of the lot around 1870, and can be seen in the distant right of both photos.

The original location of the house later became the site of a new mansion, which was completed in 1894 for Charles L. Goodhue. He was a contractor and businessman who, among other things, served as president of Chicopee National Bank and the Knox Automobile Company, and he was still living here when the first photo was taken. His house was among the largest ever built in the city, and offered commanding views of downtown Springfield from atop the hill.

By the 1940s, the mansion was owned by Mayor Roger L. Putnam, but in the second half of the 20th century it was owned by several different schools, before being sold to the Holyoke-Chicopee-Springfield Head Start in 1997. Despite a 1950s classroom wing on the left side of the house, its exterior is otherwise unaltered from the first photo. Similarly, the other houses on Madison Avenue have also survived, and the entire street is part of the Maple Hill Local Historic District. The Goodhue House, however, is also part of the Ames/Crescent Hill Historic District, which is listed on the National Register of Historic Places.

The house at 48 Madison Avenue in Springfield, around 1893. Image from Sketches of the old inhabitants and other citizens of old Springfield (1893). 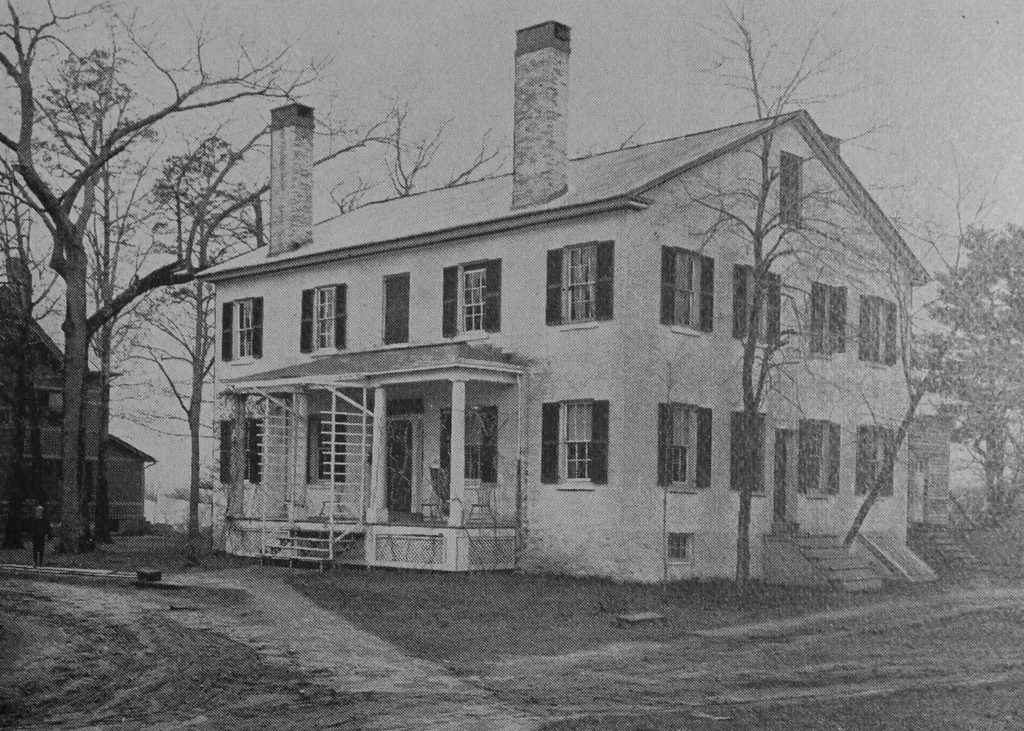 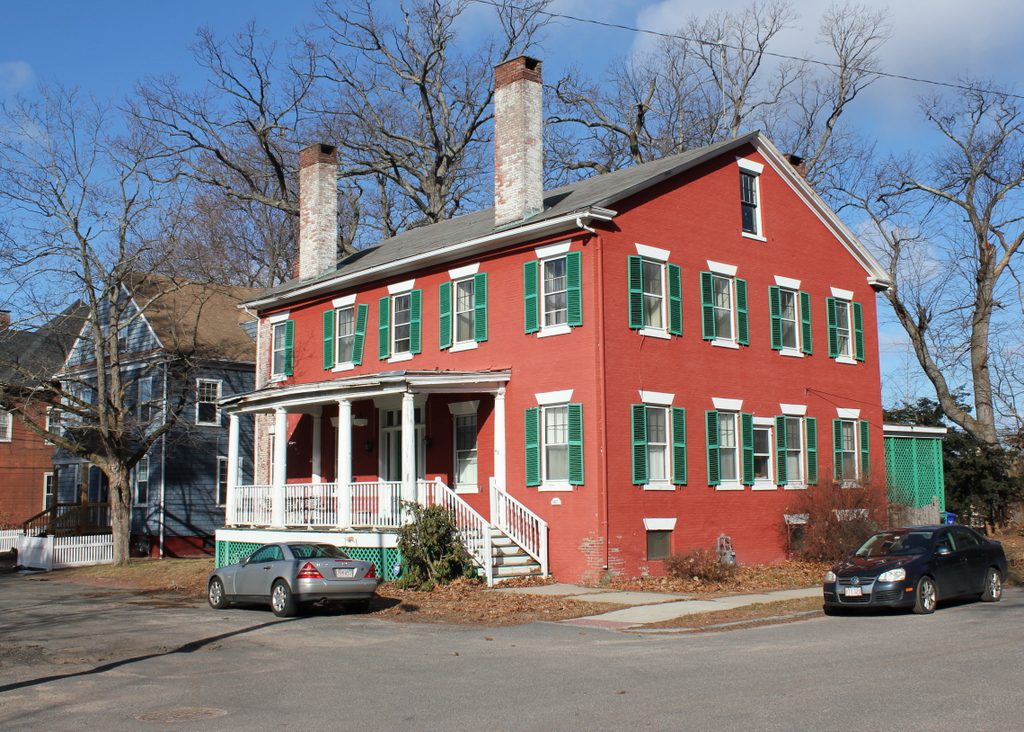 Henry Sterns was born in 1794 in Halifax, Nova Scotia, but came to Springfield as a young child. He went on to become a prosperous merchant, and in 1826 he married into the prominent Dwight family. His wife, Sophia, was the daughter of the late James Scutt Dwight, who himself had been a wealthy merchant. The following year, the couple moved into this house, which at the time was located closer to Central Street.

The house is built of brick, with a relatively simple Federal-style design that was typical for the time. It was designed by Simon Sanborn, a prolific master builder who constructed a number of buildings in early 19th century Springfield, including the Alexander House. At the time, the Maple Hill section of Springfield was lightly developed, and Sterns’s home was situated on a large lot on the north side of Central Street. Covered in trees, the land became known as Sterns’s Woods, and abutted the land that would later become Springfield Cemetery.

Sterns lived in this house for the rest of his life, during which time he continued to be a successful businessman, and eventually served as treasurer for the Springfield Institution for Savings from 1849 to 1858. He died in 1859, and within the next decade Springfield experienced a rapid population growth. With increasing demand for new houses, the property was subdivided. Two new streets, Sterns Terrace and Madison Avenue, were developed, with one on either side of the house. Around 1870, the house itself was moved to the back of the lot, and became 48 Madison Avenue. The Charles L. Goodhue House, which still stands at 216 Central Street, was later built on the original site of the Sterns House.

By the time the first photo was taken, the house was in its new location, and was the home of jeweler William W. White and his wife Ellen. He died in the 1890s, and by the 1900 census Ellen was living here with her daughter and granddaughter. She also rented to boarders, and four were living here at the time. Among them was a newspaper editor, a proofreader, and an inspector at the Armory.

The old house has since seen a number of other owners, but it is still standing, nearly two centuries after Henry and Sophia Sterns moved in. Very little has changed with the exterior, and its plain design stands out in a neighborhood otherwise dominated by far more elaborate homes from the late 19th and early 20th centuries. The city has very clearly grown up around the house, but it survives as a reminder of a long-lost time when Springfield’s wealthy residents lived on large, wooded estates on the outskirts of the downtown area. It is one of the oldest buildings in the city, and it is part of the city’s Maple Hill Local Historic District. 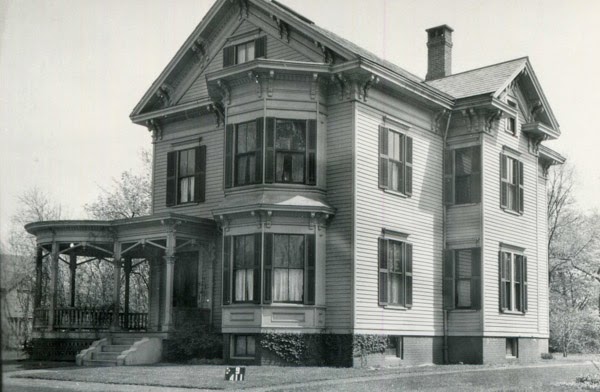 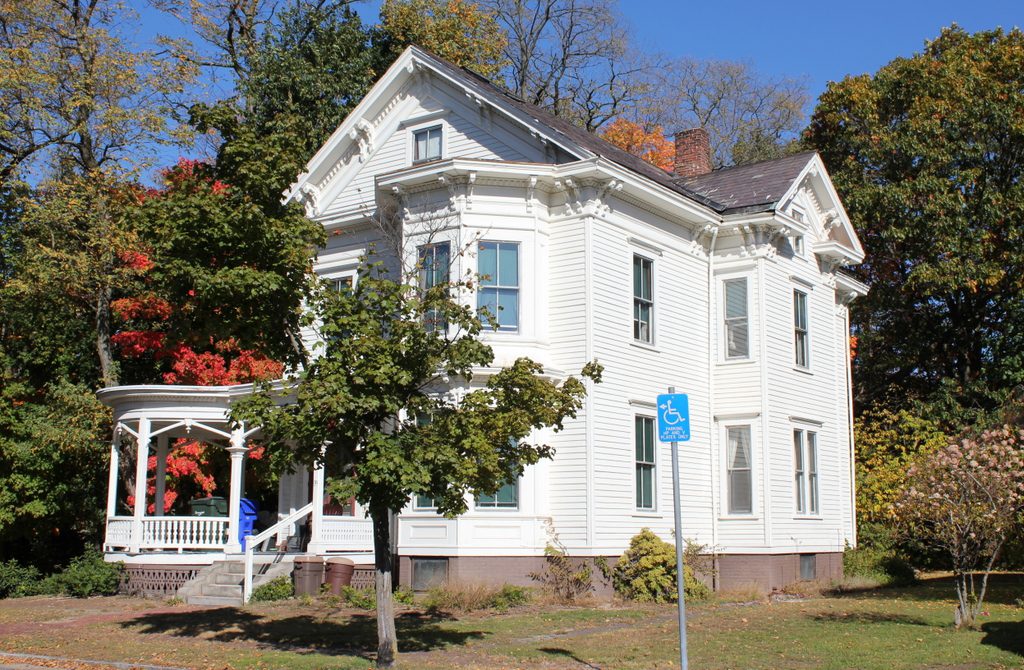 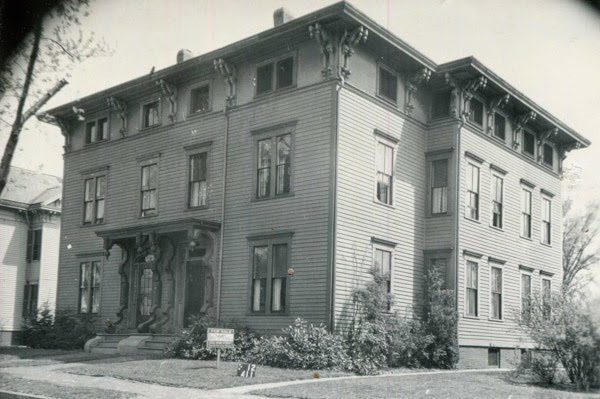 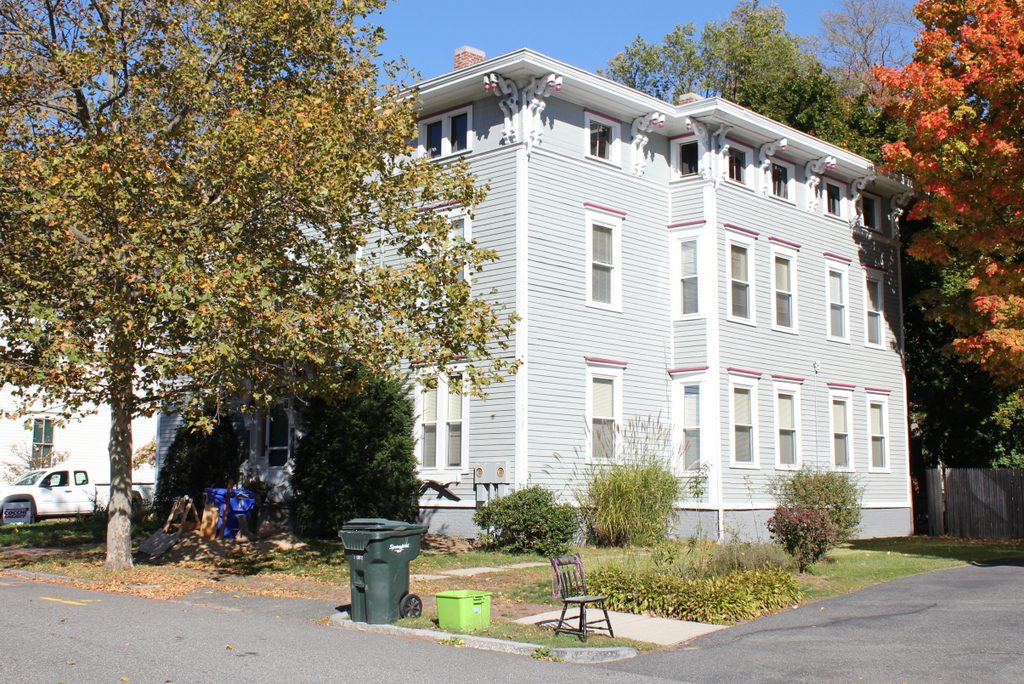 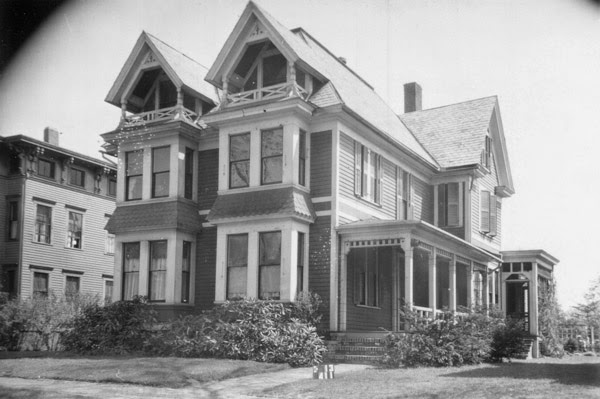 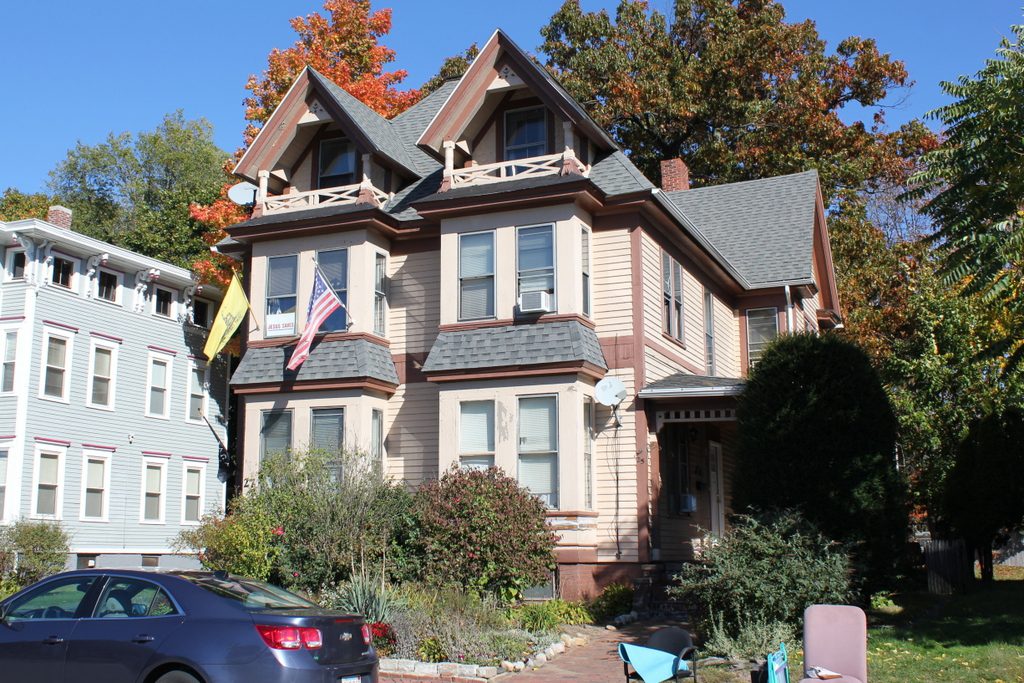 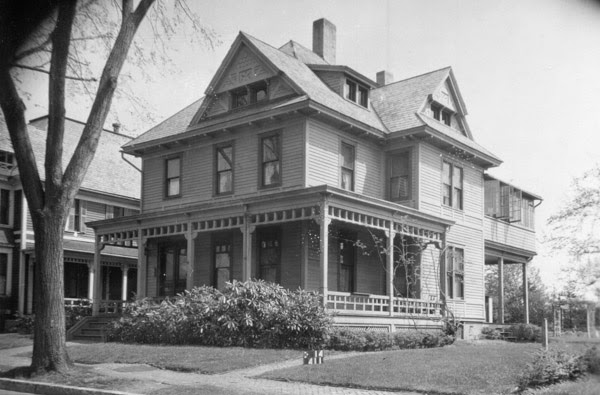 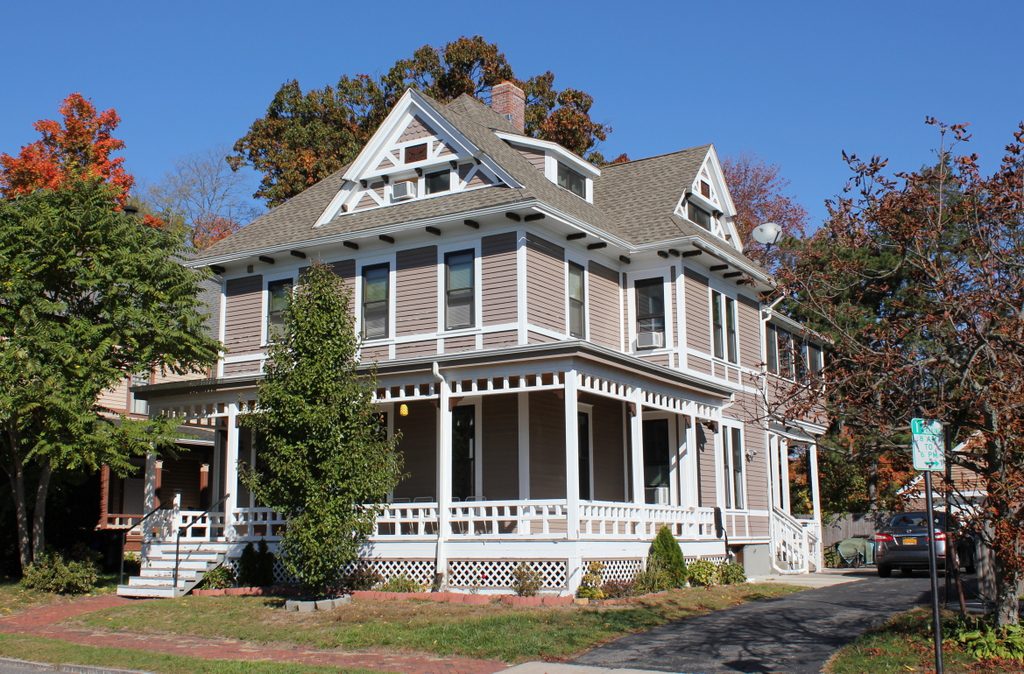