The house at 1154 Worthington Street in Springfield, around 1938-1939. Image courtesy of the Springfield Preservation Trust. 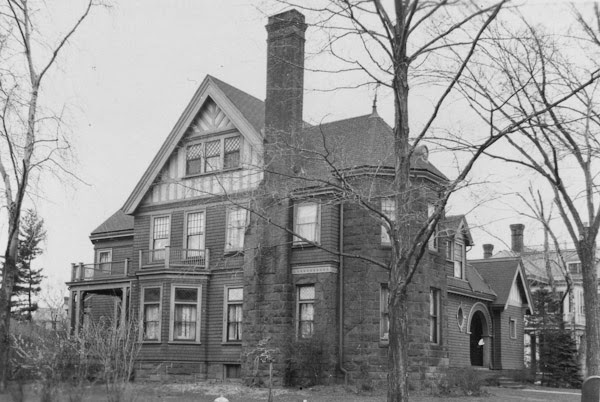 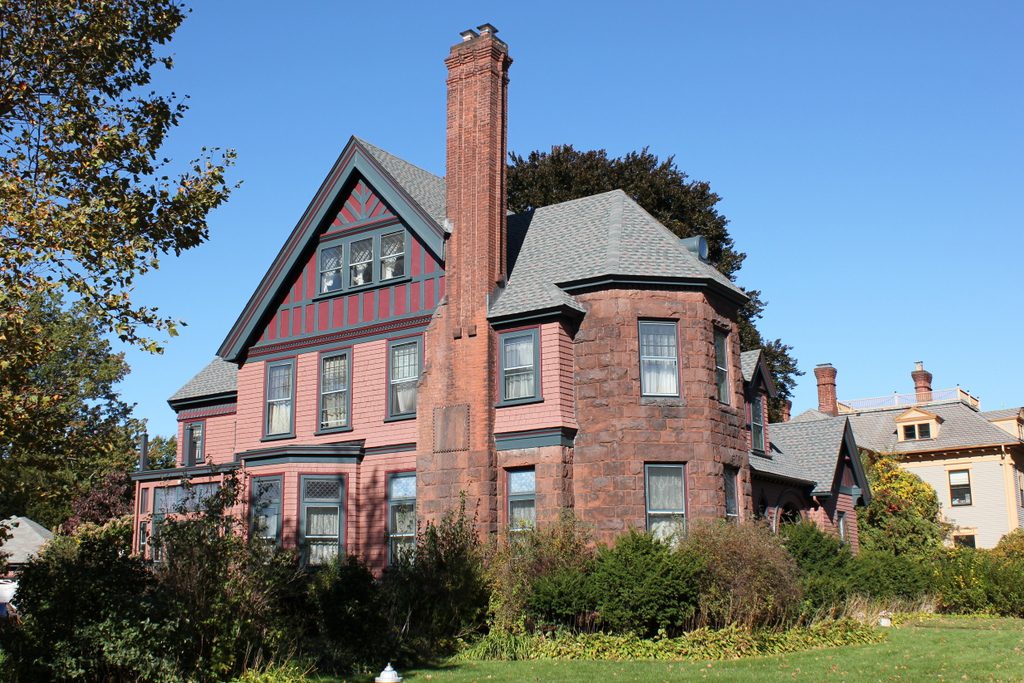 The McKnight neighborhood was developed in the late 19th century, with hundreds of elegant homes that attracted some of the city’s wealthiest residents. This particular house was built in 1889 at the corner of Worthington and Clarendon Streets, opposite Thompson Triangle. Its design reflects the Queen Anne architecture of the day, and includes asymmetrical facades, an ornate chimney, and a variety of exterior materials.

Its original owner was Eleanor S. Woods, a wealthy widow whose father, Charles Merriam, had been the co-founder of the present-day Merriam-Webster company. Although a Springfield native, Woods had lived in California before moving into this house. Her husband, Colonel Samuel Woods, had been a West Point graduate and career military officer, serving in the Mexican-American War as well as the Civil War. After his retirement in 1881, the couple lived in Oakland, California until his death in 1887.

Eleanor Woods was about 50 when the house was completed. She and Samuel had no children together, but in the 1900 census she was living here with her 38 year old nephew Charles Kirkham and her 84 year old aunt Elizabeth Warriner, along with two servants. Both Charles and Elizabeth died in 1901, and Eleanor died in 1906 at the age of 66.

After her death, the house was owned by the Episcopalian diocese, and was used as the residence for the bishop. The diocese’s first bishop, Alexander Hamilton Vinton, lived here until his death in 1911. During this time, he added a chapel to the house. His successor, Thomas F. Davies, also lived here, remaining here for 20 years until the diocese sold the house in 1931.

The house subsequently underwent significant alterations, and was at one point even used as a doctor’s office. However, it has since been restored to its original splendor as a single-family home. Like the hundreds of other Victorian-era homes in the neighborhood, it is part of the McKnight District on the National Register of Historic Places.

The house at 303 Maple Street in Springfield, around 1938-1939. Image courtesy of the Springfield Preservation Trust. 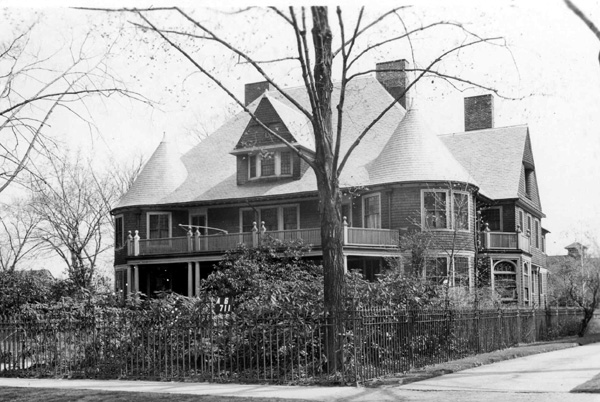 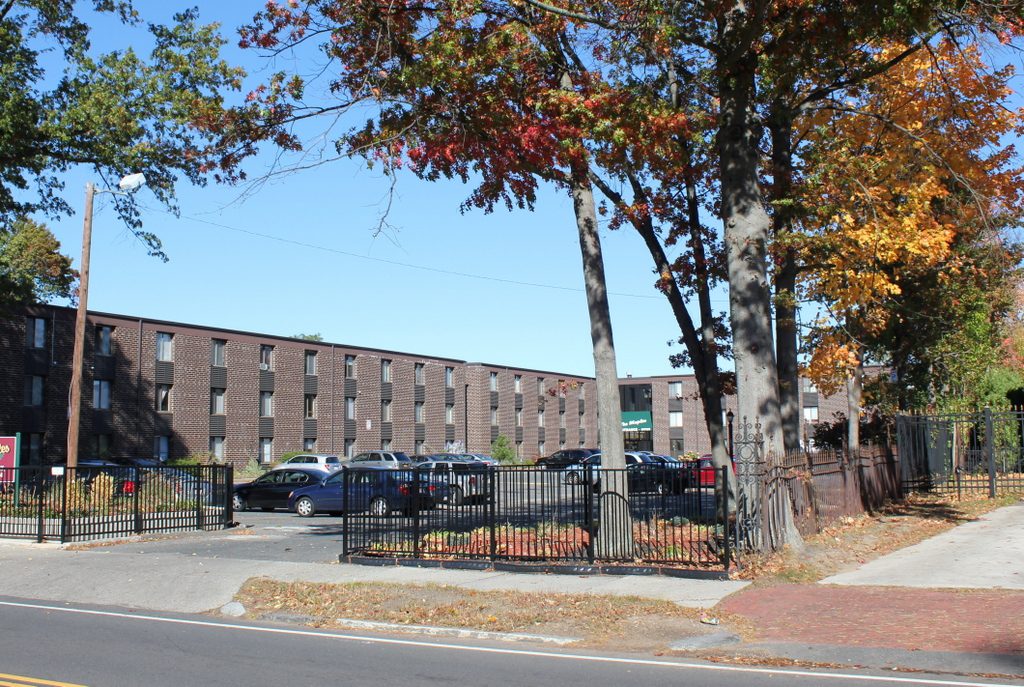 This shingle-style mansion at the corner of Maple Street and Maple Court was built sometime around the 1890s, and was the home of Henry H. Skinner, a prominent banker and businessman. His lengthy resume included serving as a director for a number of manufacturing companies and railroads, and starting in 1920 he was also the president of the Hendee Manufacturing Company, the makers of Indian motorcycles.

Henry married Gertrude Parsons in 1886, and by 1888 the couple was living nearby at 346 Maple Street, although they subsequently moved into this house in the late 1890s. They never had any children, but they were certainly not alone in the house, regularly employing multiple servants. In the 1900 census, three Irish servants lived here, and confusingly enough, all were named Mary. Gertrude died in 1907 at the age of 42, and was buried in a large plot in Springfield Cemetery, with Henry hiring the famous Olmsted Brothers, the sons of Frederick Law Olmsted, to design the landscaping. Following her death, Henry continued here on Maple Street until his own death in 1923, and was buried alongside her in their cemetery plot.

Henry’s sister Jennie inherited the house, and she lived here with her husband William A. Baldwin, an educator who had served as principal of the Hyannis State Normal School on Cape Cod. He died in 1936, and Jennie owned the property until 1951, a few years before her death in 1954. However, she does not appear to have lived in the house since the 1930s, and it seems to have been vacant by the 1940 census. It was demolished sometime before 1971, when the current apartments were built on the site. Today, the only remnant left from the first photo is the rusty fence on the right side of the property. 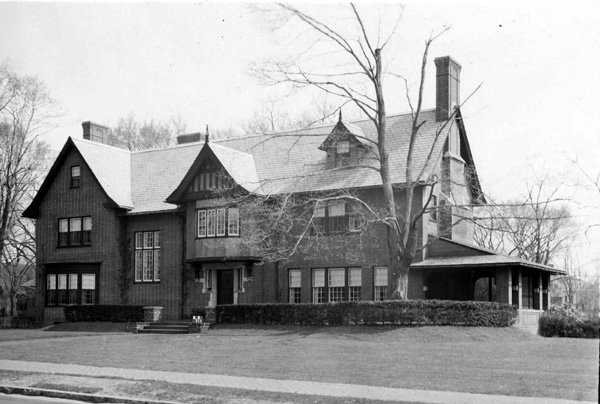 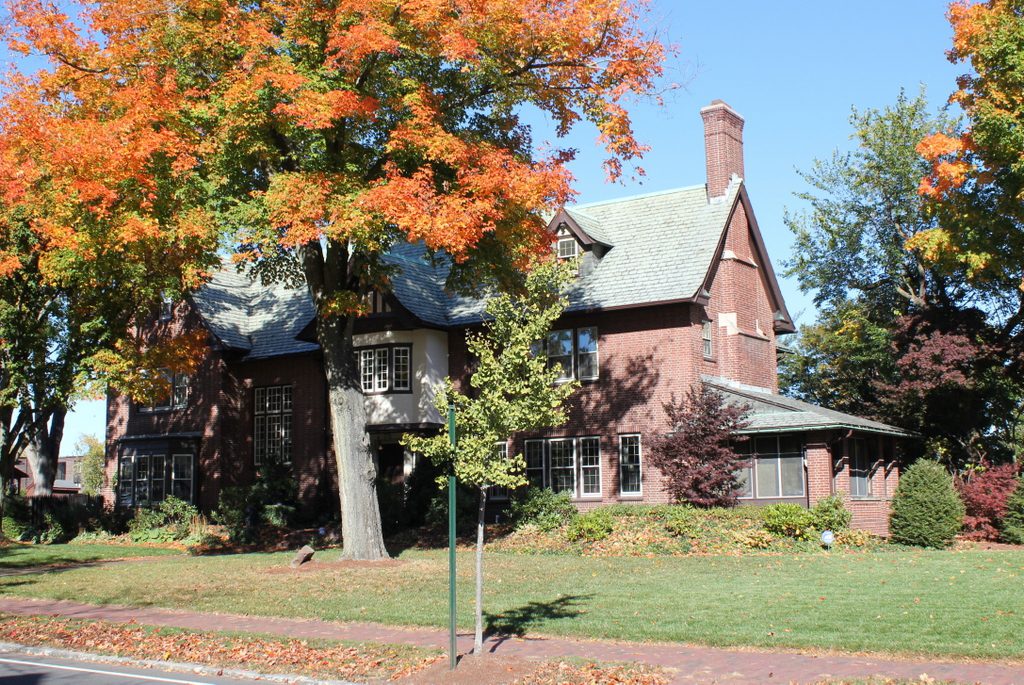 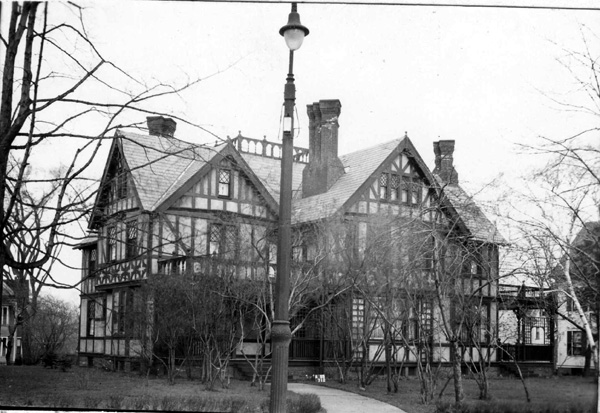 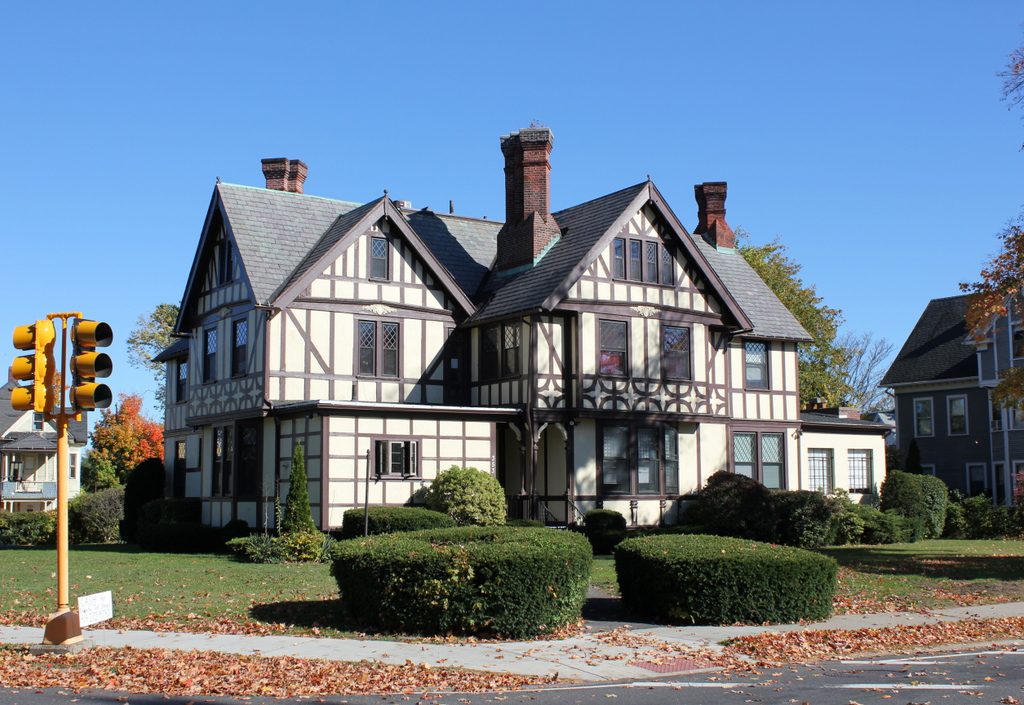 The house at 355 Maple Street in Springfield, around 1938-1939. Image courtesy of the Springfield Preservation Trust. 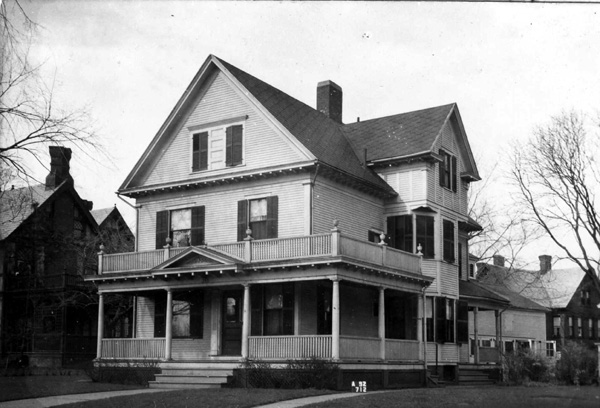 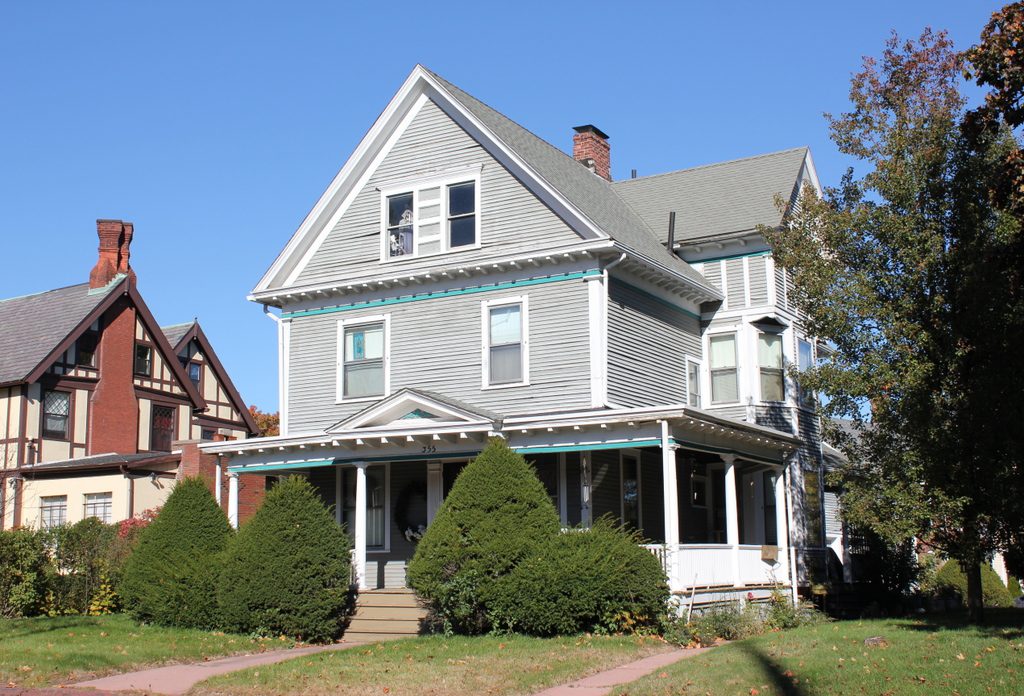 Maple Street was home to some of Springfield’s most prominent residents in the 19th century, including George Reynolds, who had this house built around 1860. Reynolds was born in 1822 in Southbridge, Massachusetts, but like many others of the time, he was drawn to Springfield by the Armory, where he worked for six years as a young man. Soon after arriving here, he married Longmeadow resident Harriett Colton, and by the early 1850s he had started a successful business as a landscaper and contractor.

It was an auspicious time to start such a company, because the post-Civil War era brought a housing boom to the city. Upper middle class families flocked to Springfield and built large, elegant homes, and Reynolds, along with business partner Justin Sackett, did extensive work for both the city and individual residents. Their projects included building the park roads in Forest Park, creating the Van Horn Reservoir, and building the streets in the McKnight neighborhood.

George and Harriett Reynolds lived in this house with their two children, Louisa and Howard. By 1900, Howard was living in the house next door at 357 Maple Street, but Louisa and her husband Herbert Hastings lived here with her parents. Both George and Harriett died in 1902, only a few weeks apart, and Louisa inherited the house. In the meantime, the family business carried on, with Howard and Herbert forming the partnership of Reynolds & Hastings.

Both Louisa and Herbert died in the 1920s, and the next two censuses show that the house was being rented by Charles Lomas, who paid $100 per month in 1930 and $75 in 1940. Since then, the exterior house has remained well-preserved, although it is missing the shutters and the balustrade on top of the porch. Fairly modest in size and style compared to many of the other historic mansions on Maple Street, it survives as one of the oldest on the street. Along with the surrounding homes, it is part of the Ames/Crescent Hill District on the National Register of Historic Places.

The house at 357 Maple Street, at the corner of George Street in Springfield, around 1938-1939. Image courtesy of the Springfield Preservation Trust. 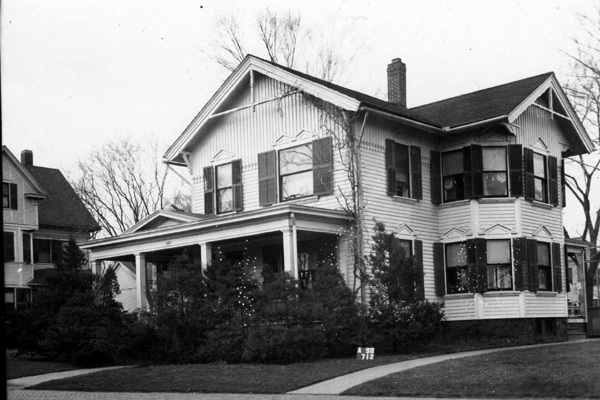 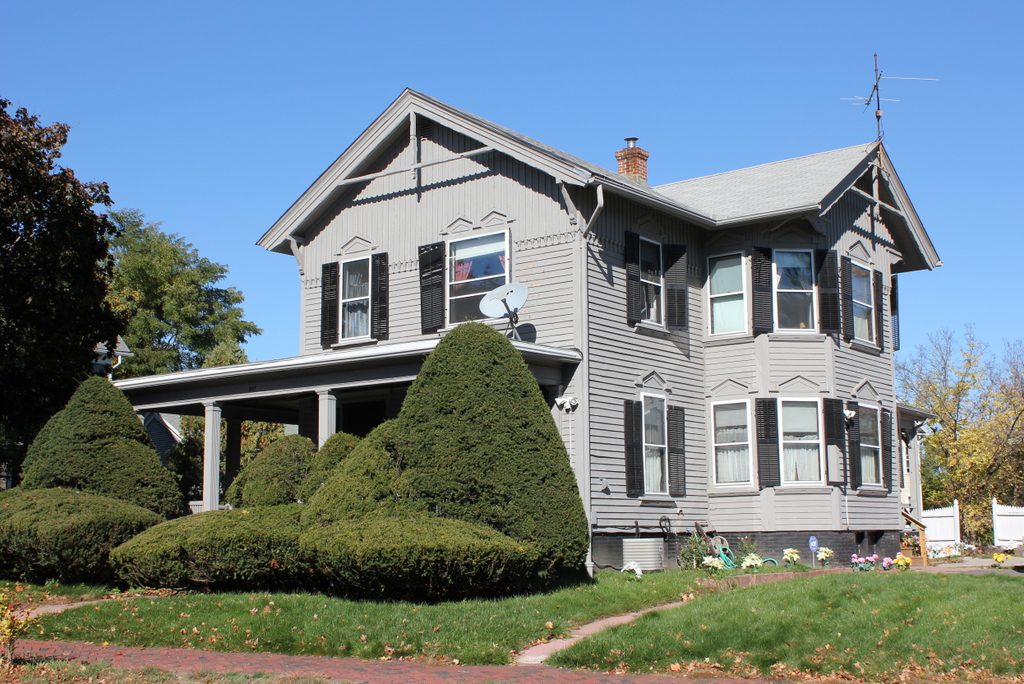 This house is located in the small triangle between Maple, Pine, and George Streets. It was built around 1865 for George Reynolds, a landscaper and contractor who lived in the house next door at 355 Maple Street. Several generations of the Reynolds family lived here, starting with George’s son Howard. He worked for his father’s company, and lived in this house with his wife Martha and their son, George H. Reynolds.

After his father’s retirement, Howard took over the company, along with his brother-in-law Herbert A. Hastings. He lived in this house for the rest of his life, until his death in 1926. His son George carried on the family business, and also lived at this house, with his wife Edna and their daughter Madeline. They were still living here when the first photo was taken on the late 1930s, nearly 50 years after George had moved into the house as a teenager in the 1890s.

Today, the house stands as a reminder of the days when Maple Street was home to some of the city’s most prominent residents. It is a relatively modest home compared to many of the others on the street, but its Gothic-style architecture is somewhat unusual for homes in Springfield. The exterior remains well preserved from its appearance when the Reynolds family lived here, and the house is part of the Ames/Crescent Hill District on the National Register of Historic Places.