Several buildings along Main Street in Springfield, seen from across the street in Court Square, around 1865-1885. Photo courtesy of New York Public Library. 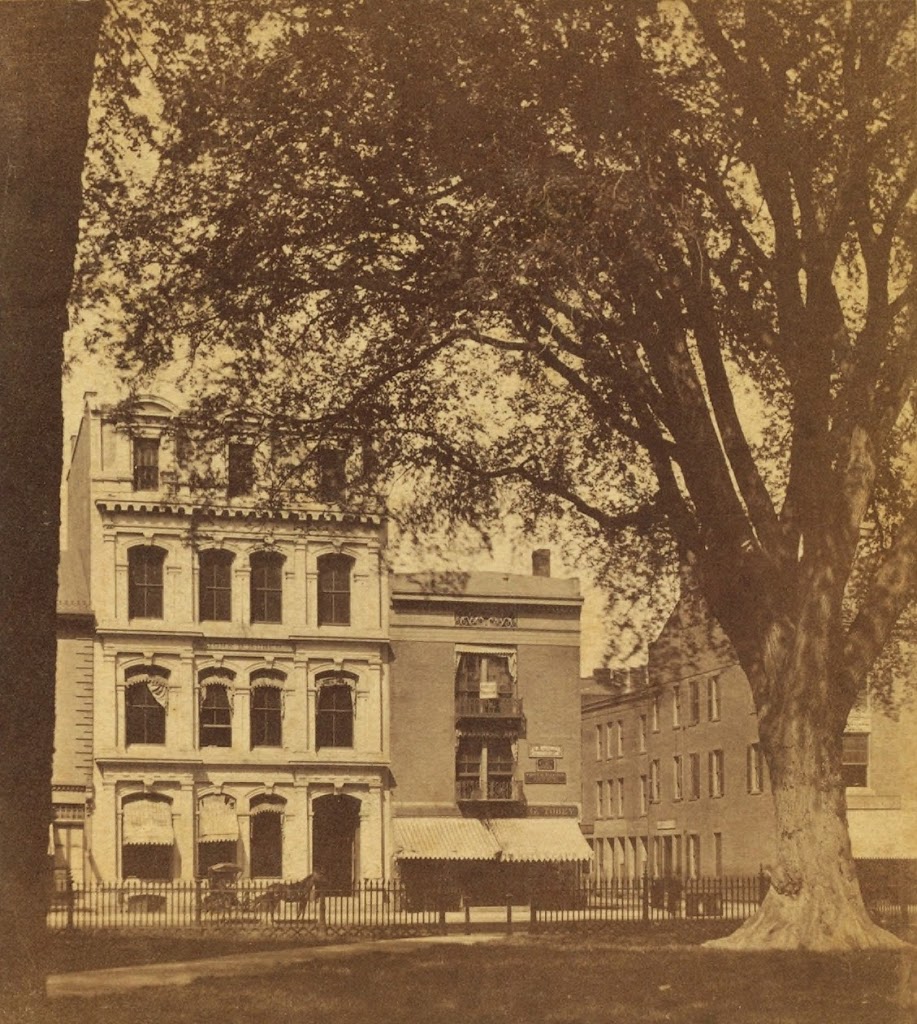 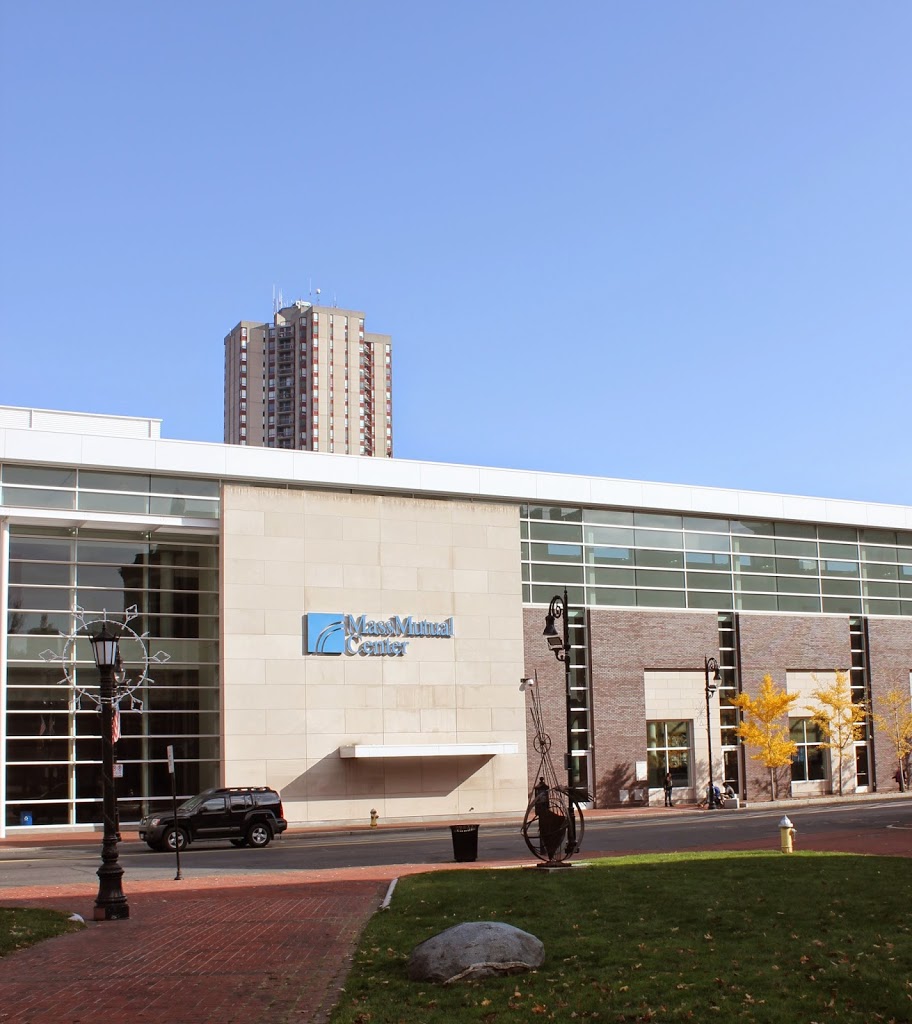 These photos were taken from Court Square from about the spot that Parsons Tavern once stood, before it was moved to the location in this post.  The massive elm tree in the first photo once stood right next to the building, and George Washington likely would’ve seen the tree upon his arrival nearly 100 years earlier.  Today, the tree is gone, but the street that it was named after – Elm Street – is still there.

The elm tree isn’t the only thing missing in the 2014 photo – the entire area across Main Street was cleared in the 1970s to build the MassMutual Center, a sports arena and convention center where the Springfield Falcons minor league hockey team plays.  According to the 1899 map of downtown Springfield, there were over 70 buildings within the modern-day footprint of the MassMutual Center, along with two streets, Market Street and Sanford Street.  Sanford Street can be seen in the opening between the buildings behind the elm tree, and once ran from Main Street to Dwight Street.

There are several identifiable businesses in the first photo; the white building on the left-hand side was the home of the First National Bank of Springfield, and just to the right of it is the storefront of Frank G. Tobey.  Tobey’s ad in the 1875 city directory indicates that he was a “Dealer in Hats, Caps, and Gent’s Furnishing Goods. Silk Hats made to order.”  Across Sanford Street, none of the signs on the storefronts are visible, but the buildings on that side appear to date to the early 1800s, with a style similar to the Byers Block on Elm Street just across Main Street, which survives today. 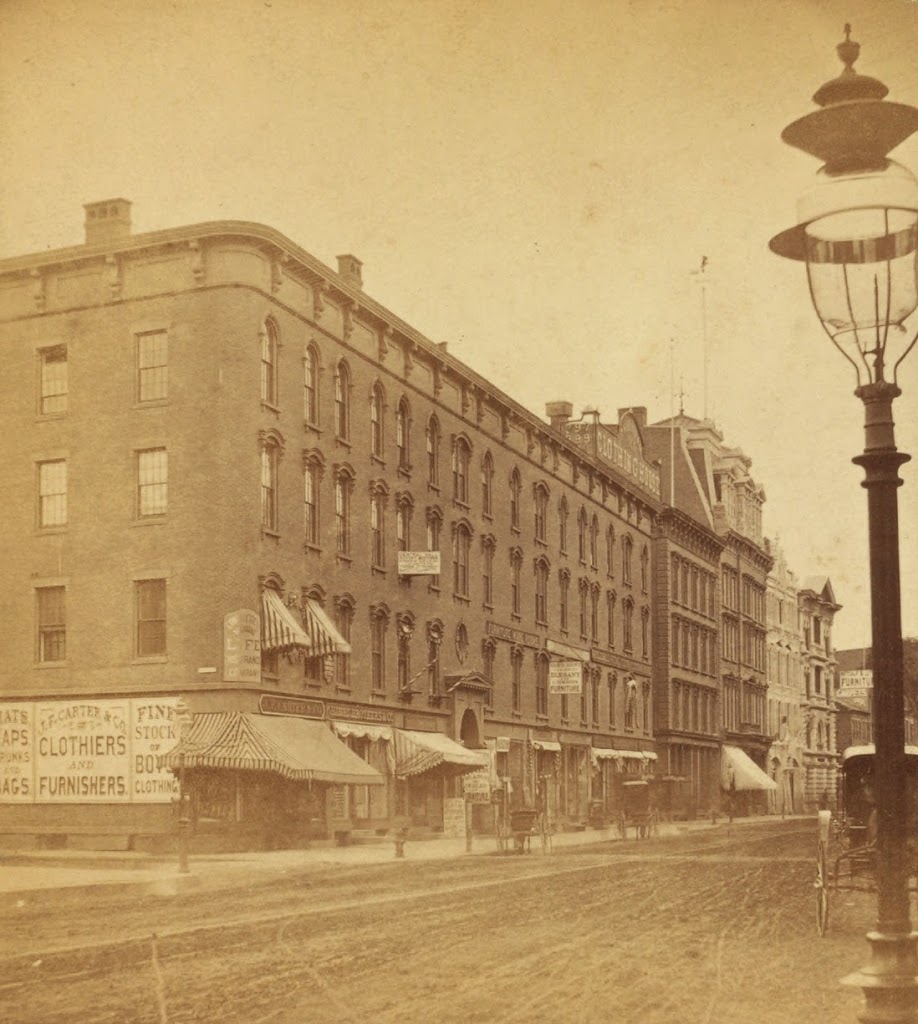 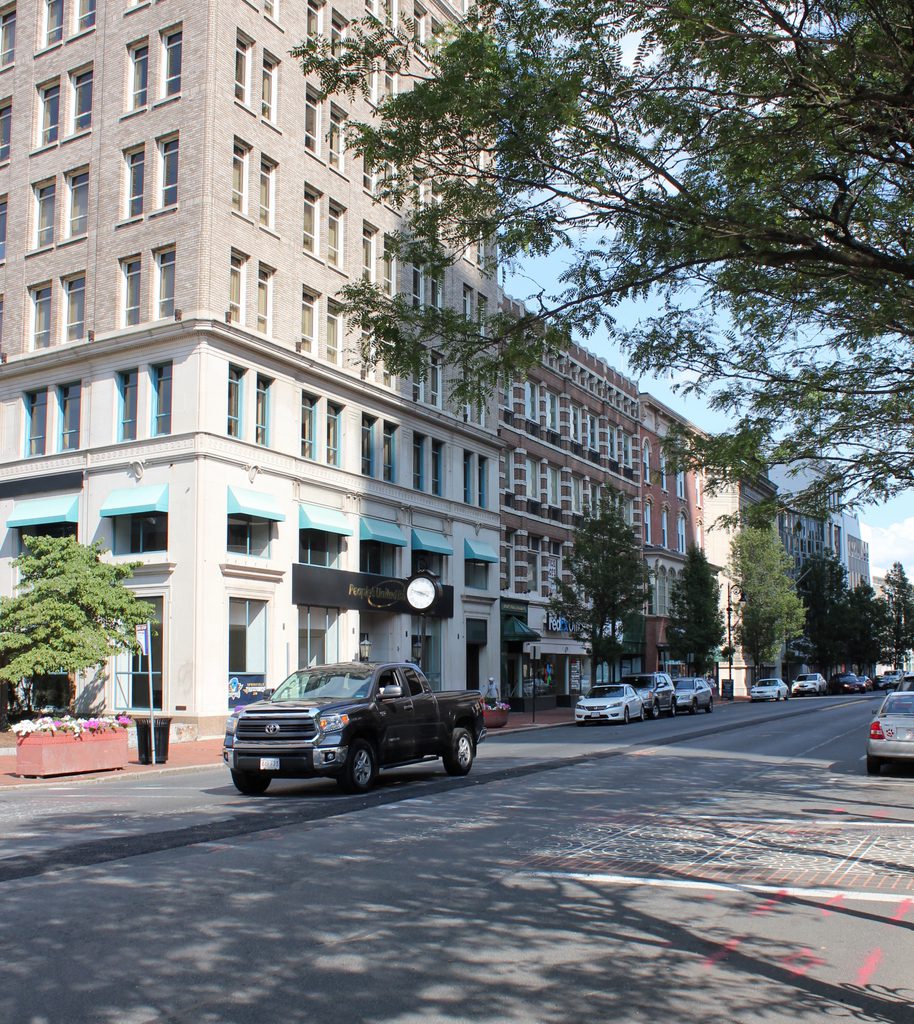 This view is very similar to the scene in this post, although the historic photo here is about 30 years older and shows just the buildings along Main Street from Harrison Ave to Court Street. As mentioned in the other post, the building in the foreground here is actually three buildings, which were constructed between 1858 and 1861, and came to be known as the Union Block.  The earliest section, furthest from the camera, is the Republican Block, and it was the home of the Springfield Republican newspaper from 1858 until 1867.  By the time the first photo was taken, it was the home of D.H. Bingham & Co. Clothing House, as seen on the massive sign atop the building.

The Republican Block is the only part of the Union Block that has survived relatively intact to this day.  The middle section, formerly home of Johnson’s Bookstore, is the original 1861 structure, but its facade was completely renovated in 1908 and does not retain any of its original architecture.

Closest to the camera, the northernmost third of the block was home of Kibbe Brothers Co., a large candy manufacturer in the city.  The Union Block was their home throughout the late 1800s, until they moved around the corner to a larger facility on Harrison Ave in 1890, which can be seen in this post.  This part of the Union Block was demolished in 1915, and replaced with the 10 story building that stands there today. 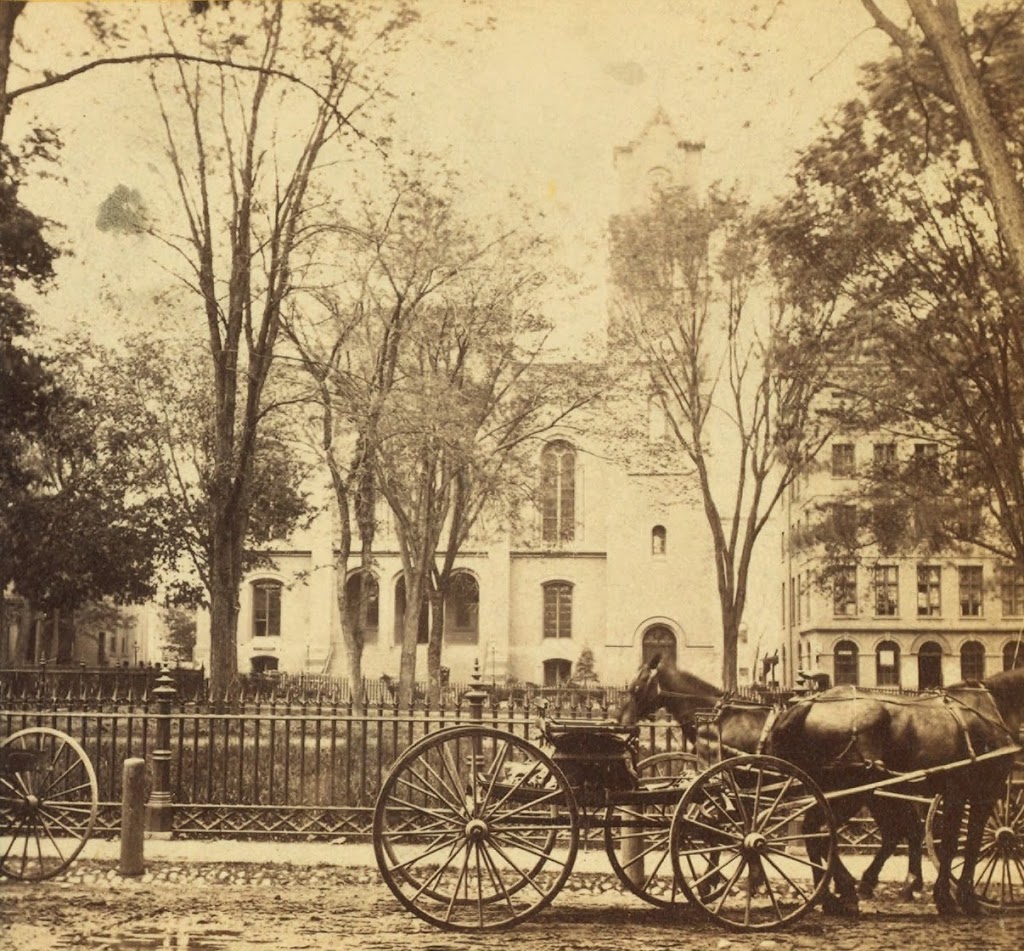 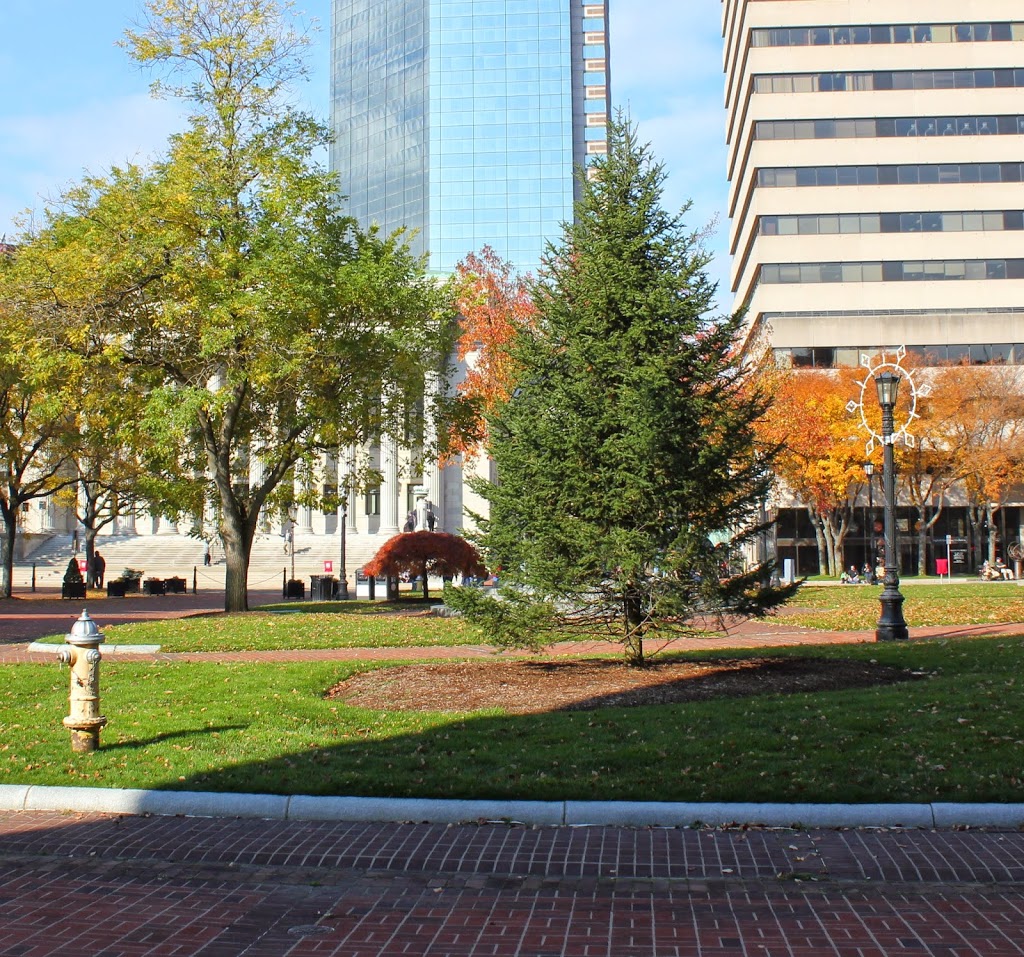 Several buildings on the west side of Main Street in Springfield, Mass, near the corner of Bridge Street, sometime in the 1870s. Photo courtesy of New York Public Library. 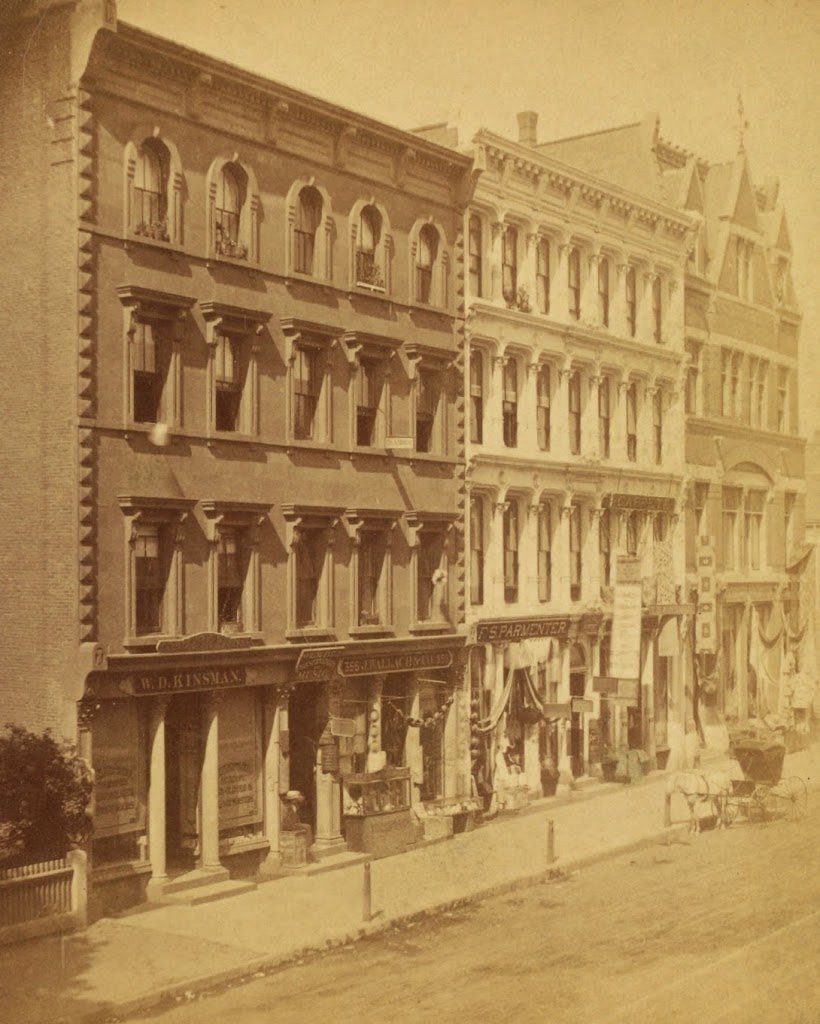 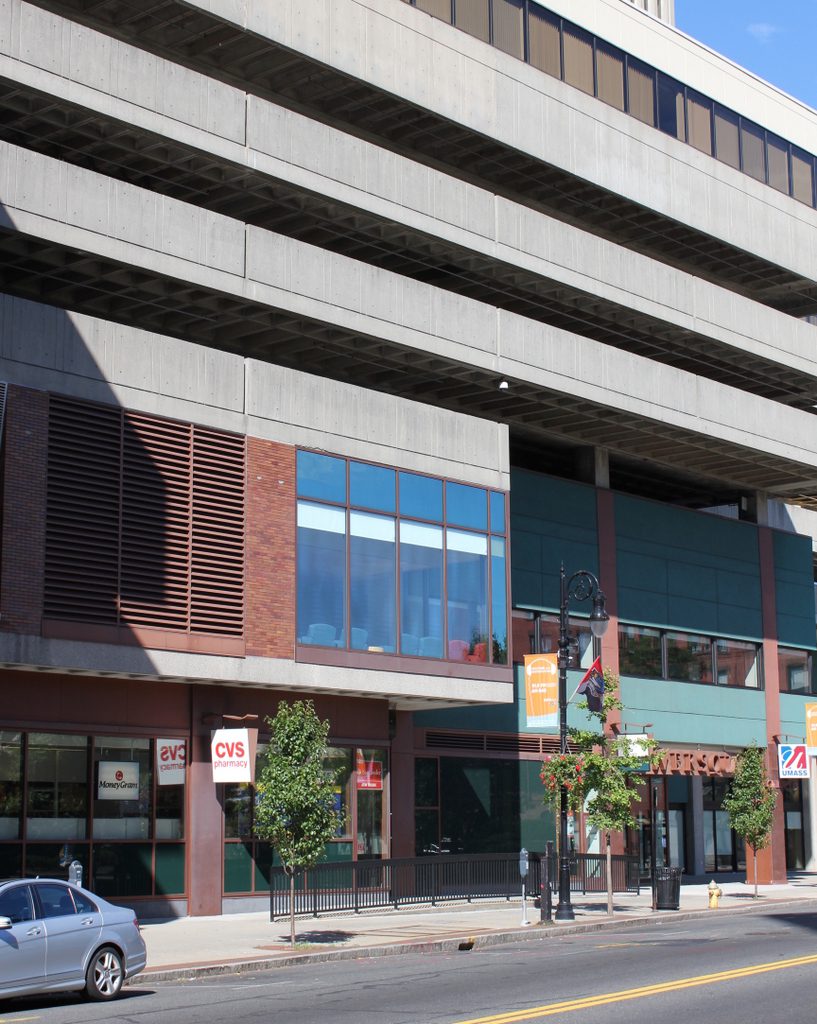 The New York Public Library estimates a date range of 1865 to 1885 for this photo, but a single sign on one of the buildings establishes that it had to have been in the 1870s.  The left-most storefront was home to W.D. Kinsman, a dry goods store that later moved a few buildings north in 1880, as seen in this post.  Other businesses visible on signs here include the Springfield Conservatory of Music, J. Wallach & Co., who sold hats, and F.S. Parmenter, another dry goods dealer.

Today, this site is still a major commercial center – the entire block is taken up by Tower Square, the second tallest building in the city.  People also still park along the side of the street, although instead of horses tied to hitching posts like in the first photo, there are cars parked next to meters. 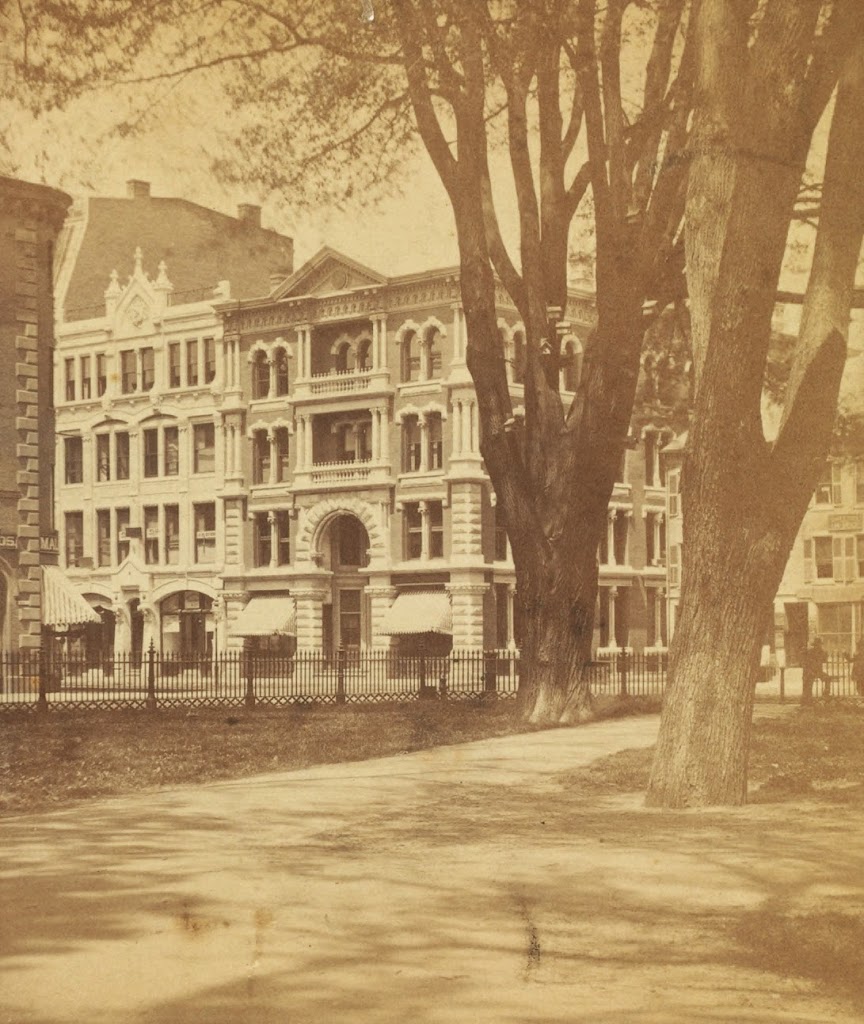 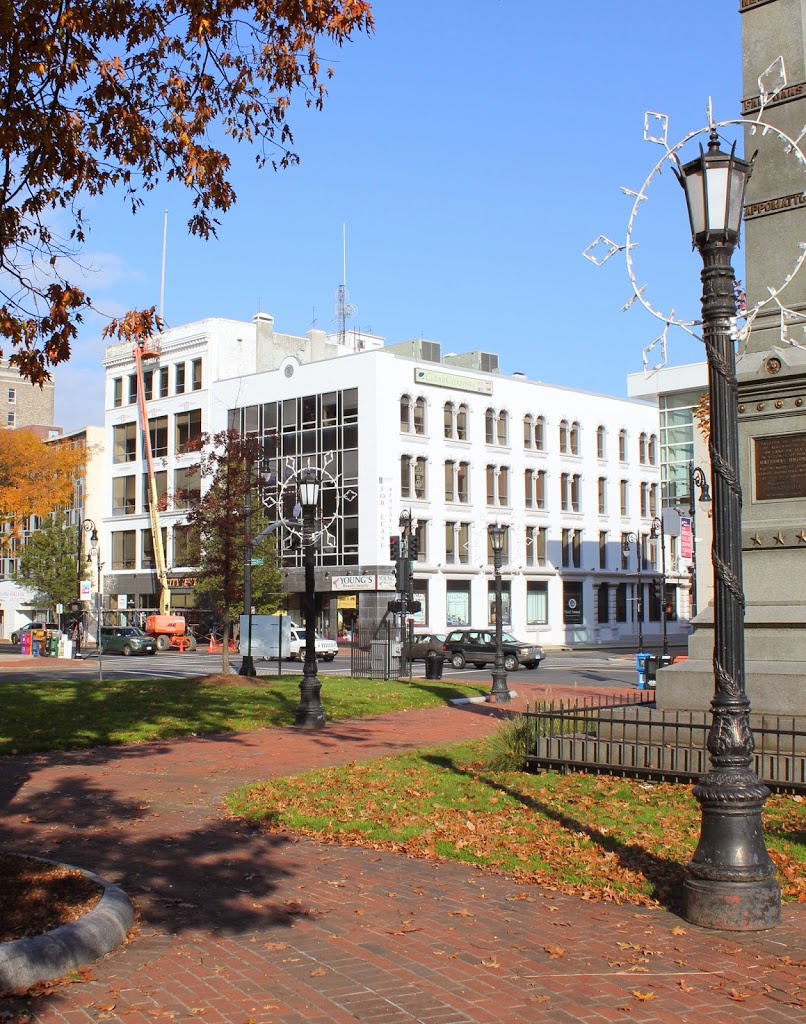 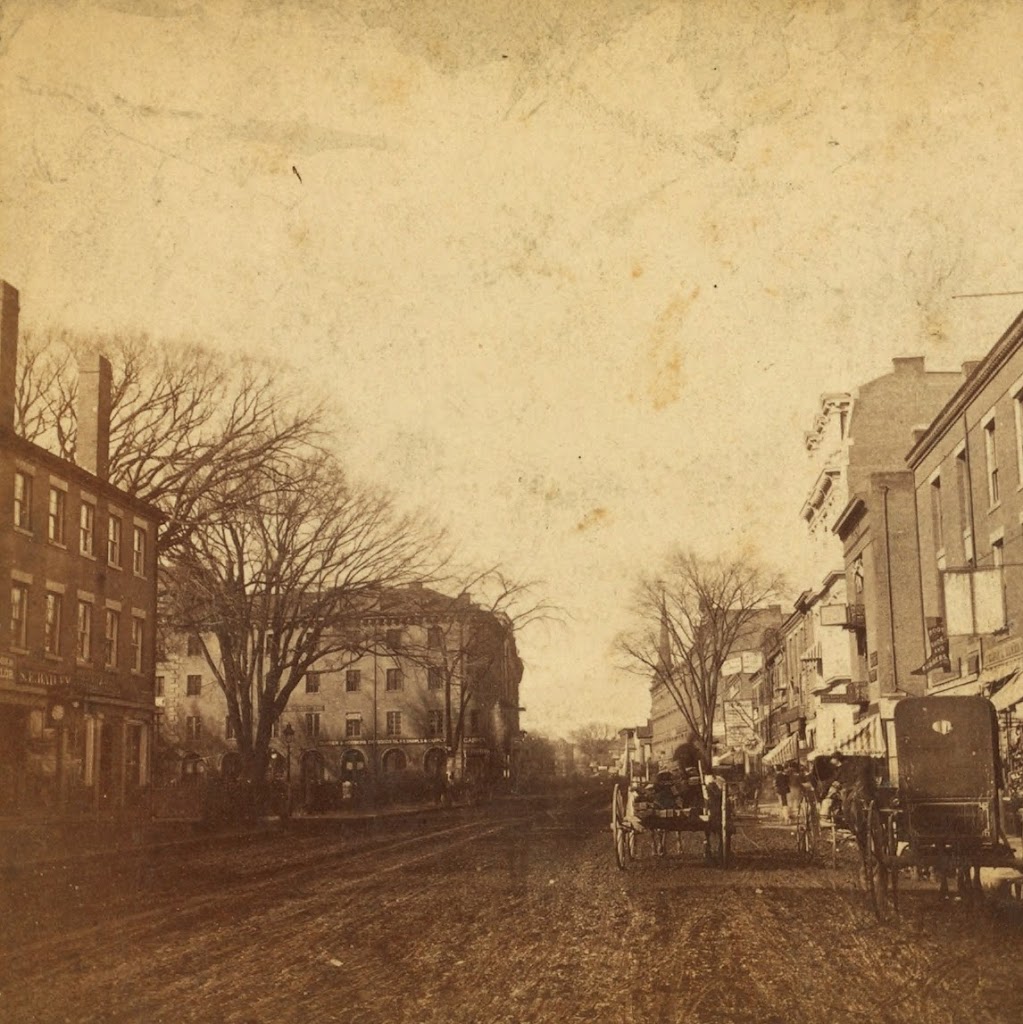 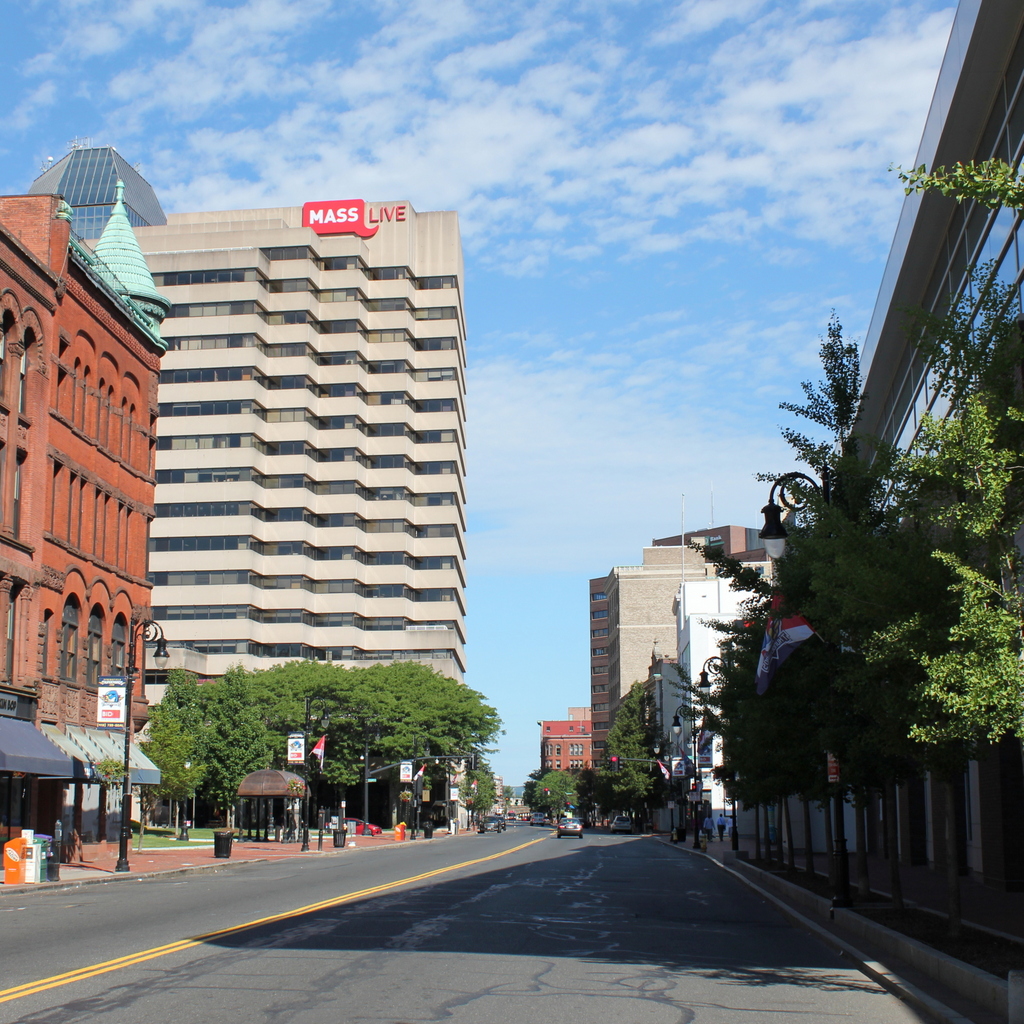 The first photo has to be one of the earliest photographic views that I’ve seen of Main Street in Springfield.  Most of the views of Main Street that I have featured on this blog show a busy urban scene with large commercial buildings.  That wasn’t the case in this photo, which was probably taken right after the end of the Civil War.  There is certainly commercial activity going on in the foreground, in the immediate vicinity of Court Square, but further up Main Street it has not yet been developed to the extent that later photographs show, such as this one taken a block north and about 50 years later.

Many of the commercial buildings in this scene, especially the ones on the far left and far right, show the Federal style architecture that was common for commercial buildings in Springfield during the first half of the 19th century.  Most of these would be demolished by the turn of the century and replaced with larger, more modern buildings, such as the 1889 Chicopee Bank Building on the left-hand side in the 2017 photo.  Today, as far as I can tell, the only surviving examples are Byers Block just around the corner on Elm Street, Guenther & Handel’s Block on Stockbridge Street, and the Gunn and Hubbard Blocks on State Street opposite the Armory.

Almost everything from the first photo is gone today, including several blocks on the right-hand side, where the MassMutual Center was built in the 1970s.  However, there are at least two buildings from the first photo that still exist, in the block visible in the distance just in front of the church steeple.  This block was made up of three buildings, two of which survive today: the former Johnson’s Bookstore building and the Republican Block.  It is also possible that the 1865 Haynes Hotel (seen in this post) appears in the first photo, although from this angle it is hard to tell.